The Shining is a Horror Film

The Shining is a horror film produced and directed in 1980 by Stanley Kubrick and co-written with Diane Johnson that was based on Stephen King’s 1977 novel The Shining.

A man, his son, and wife become the winter caretakers of an hotel where Danny, the son, sees scary visions of the hotel’s horrific past using a telepathic gift “The Shining”. The father, Jack Torrance, is trying to finish his writing project when he slowly becomes insane as a result of cabin influence and images of former hotel guests.

Don't use plagiarized sources. Get your custom essay on
“ The Shining is a Horror Film ”
Get custom paper
NEW! smart matching with writer

After talking to one of them Jack goes completely insane and puts his family in danger. The only thing that can save Danny and his mother is “The Shining”.

The opening title starts with long shot to show audiences where the action is taking place. The whole sequence consists of a helicopter following yellow car as it drives along mountain roads in the middle of nowhere. Birds eye view-highlight the isolation while at the same time being watched.

We get the feeling of never-ending road. There is a high angle used to show the emptiness of road. We can see only one car that goes opposite direction that gives us a hint about danger and unsafe situation that could happened.

The beautiful landscapes shown , but music that is playing in the background make the viewers feel uncomfortable to watch. Soundtrack (scary and builds the tension) that contains ether high or low , contrapuntal , non-diegetic sound. During the whole opening shot we can here scary female voice that mostly like to be ghostly figure of hotel past.

The whole sequence goes against the typical horror film idea which would usually contain dark lighting and colours which is why watching this opening feel so much more uncomfortable and unsettled. In the way this is a good thing because audiences least expecting the killing to occur and views will be more shocked which is what the aim is .

The typography used within this sequence isn’t what would be expected in this film genre as it is very brightly coloured and in a very regular font that is just moving up the screen that was typical for the eighties . Without the music playing in the background, it could be mistaken for any other genre of film.

At the very end of the sequence the car arrives at a seemingly abandoned hotel in the middle of nowhere. Shaky/ hand held effect used for a zoom in gives feeling of unease about the hotel.

The Shining is a Horror Film. (2019, Dec 01). Retrieved from http://studymoose.com/the-shining-is-a-horror-film-produced-and-directed-in-1980-example-essay 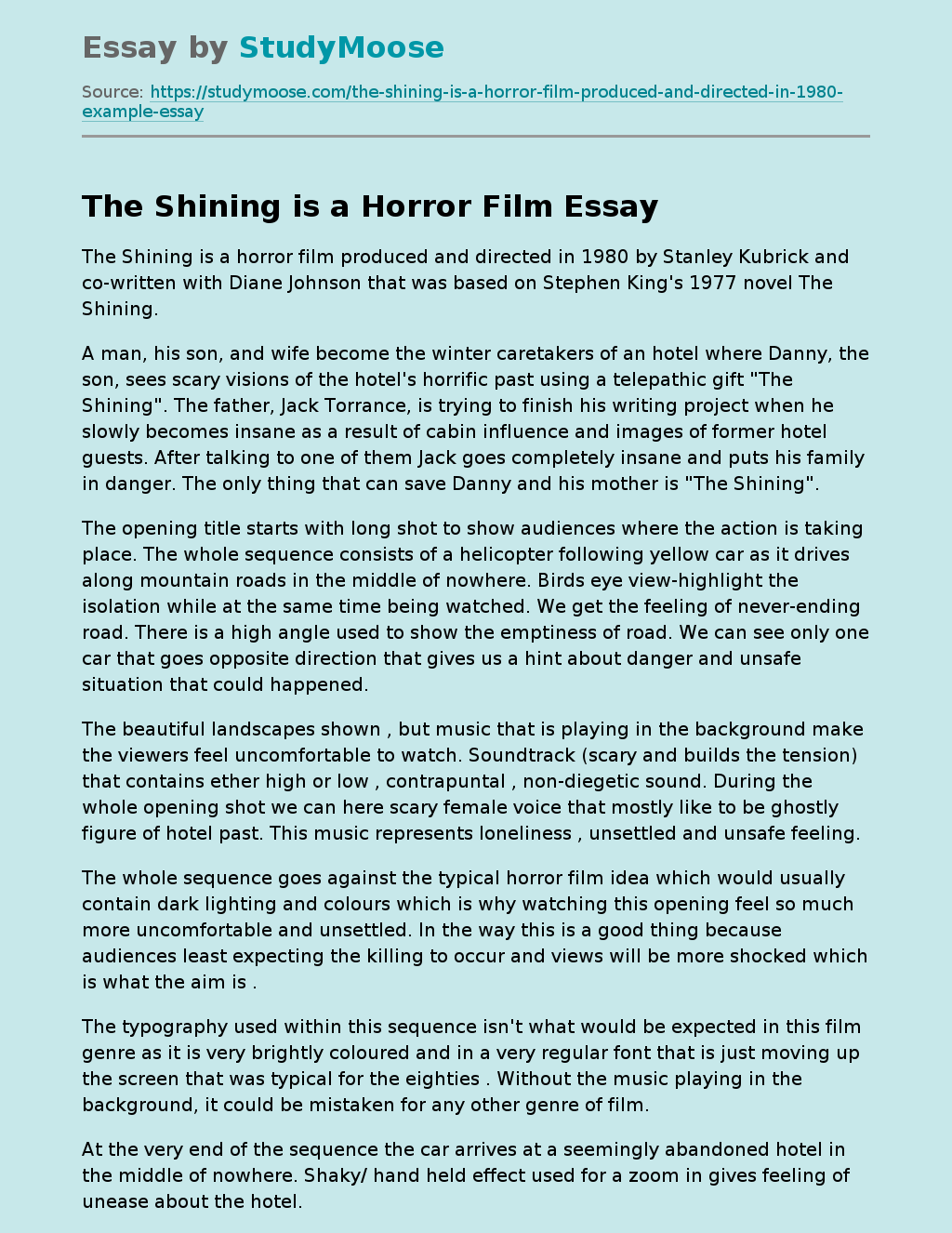