Pangma-la’s father has named her after a mountain, that’s also called The Shining Mountain. She’s teased about her name in school, and her schoolmates are more interested in her father, who’s a famous mountaineer. He has big expectation to Pangma-la, and she feels like she’s failing. She decides that she will make him proud, and begins to practice in climbing mountains. Pangma-la and her father, goes to The Shining Mountain with the goal to reach the top.

Don't use plagiarized sources. Get your custom essay on
“ Analysis: The Shining Mountain ”
Get custom paper
NEW! smart matching with writer

At the bottom at the mountain the meet some sherpa men, who wants to carry their bags, but they say no, and then the sherpas tells them, that now a wind will come and blow on them. They begin to climb the mountain, but Pangma-la has problems, so an old sherpa woman comes and offer her help. She comes four days in succession, and every time she takes something from her, and gives her swan downs instead. The last time she’s taking Pangma-la’s heart, and at the same time, her soul, and then the father, after a talk with the old sherpa woman, who is now the mountain goddess, realizes everything his daughter has done to make him proud, and then, first there, is the first time he shows human feelings.

Proficient in: The Shining

I think the story can take place in both a real world, and also an imaginary world, because some of the things that happens, for example page 21 line 5, where she give away her heart, is unrealistic, but I still think that some people would believe in this so much that they thought it really happened. The social environment is in the home not really god for Pangma-la. I see that on page 19 line 1 where she oppresses her feelings. In the school Pangma-la is teased about her name and the schoolmates is more impressed of what her father is doing, than what Pangma-la is doing, so for Pangma-la the environment is not good. I think these two things tell that Pangma-la sees her father as a role model, and that’s why she wants to be like him, and therefore she oppresses her feelings, and changes herself.

– Pangma-la is the main character. She is a Scottish girl, who is named after a mountain, that’s also called the shining mountain, because her father thinks, that she then also someday will stand tall like the mountain. Her schoolmates tease her with her name. I don’t think she’s very old, because she’s not very independent, and thinks way too much about what, mostly, her father thinks. She looks up to her father, because he is a famous mountain climber, and she want to be like him. She’s afraid to disappoint him, because he expects a lot from her. It’s like everything she does is to make him proud, and she will do everything to make him proud. For example on page 21 line 8, where she gives away her heavy, heavy heart.

– The father is also an important person in the story. He’s a famous mountaineer, and he is often in television, because he has done something great again. I think the reason why he expects so big thing of Pangma-la, is that he maybe always self, has bin good at a lot of things. Pangma-la’s friends see him as a hero, because he’s in television, and because of what he is doing. He pushes her to do things she really doesn’t like, for example climbing The Shining Mountain. At last he realizes everything she has done to make him proud, and I think he’s going to change a lot after this (if Pangma-la survives). In the end, page 22 line 1 is the first time the father really shows feelings to his daughter in the story.

– The Sherpa woman lives in the mountains. She’s dressed up like an old woman, but actually she’s a goddess, but that is first revealed in the end of the story. She helps Pangma-la getting to the top of the mountain, even though I don’t think her methods are good. For example she asks for Pangma-la’s heart, so she’s the weight of that lighter. In the end of the story she tells the father everything Pangma-la has done for him, so you can say she helps him realize how Pangma-la sees him as a role model, and what she does to make him proud.

– The mother is one of the main characters I think, even though it’s limited what we hear about her. But on page 19 line 8 we get an indication of, that she’s afraid that Pangma-la hurts herself climbing.

The story has an adventure like introduction, and the story is told in a chronological order. The initial situation is that Pangma-la and her father, not has a really close relationship, and when we go further in the story, they try to do things, that gets them closer to each other, but they only push each other apart. In the end of the story the father understand how the situation is, and he finally shows his feelings. I think they will get closer In the future. The story ends like this: “and never again was Pangma-la afraid that her father would be disappointed in her”, and that is a closed ending.

The story is written in third person narrative, and the narrator is omniscient. The narrator is pretty neutral in the story, and its main job is just to tell what happens. The narrator describes the persons both directly and indirectly. Examples on this, are for the directly descriptions, on page 18 line 1, where she is presented for the reader, and for the indirectly descriptions, on page 19 line 1, where we get an indication, that she is a person who puts her own feelings, away to make her father proud.

The atmosphere or the tone is, through the whole story, depressed, and not really happy. Especially Pangma-la is depressed, because of her feelings, which she’s not listening to. I se this on page 19 line 1 where she vows herself, never to disappoint her father again.

I think that the themes in the story are family love or family ties, and maybe pride. – The family love is a big thing in this story. I’m sure the father all the way through the story loves Pangma-la, but he just has an odd way showing it, or maybe he doesn’t like to show it. – Family ties are also a big part of this story. The father and daughter ties, which maybe was the idea to strengthen with the trip to The Shining Mountain. – The fathers pride is a reason why the trip goes as it goes. He’s goal is not to help his daughter, but only to get to the top.

I thing the message in the story is, that even though there’s many things to achieve in your life, such as climbing mountains, you must never forget your family!

I think the story is told in a style quit complex language, and they use some pretty strange words such as, scold, scornful and sherbet. The reason why there are some difficult and unknown words is probable that the story is written with a Scottish dialect.

The title: “The Shining Mountain” can mean several things. The most simple is just, that the story is about the shining mountain, but I think there’s more to it. The shining mountain stands tall and proud, and that is exactly what the father wants Pangma-la to do, and the title is the first indication of that. 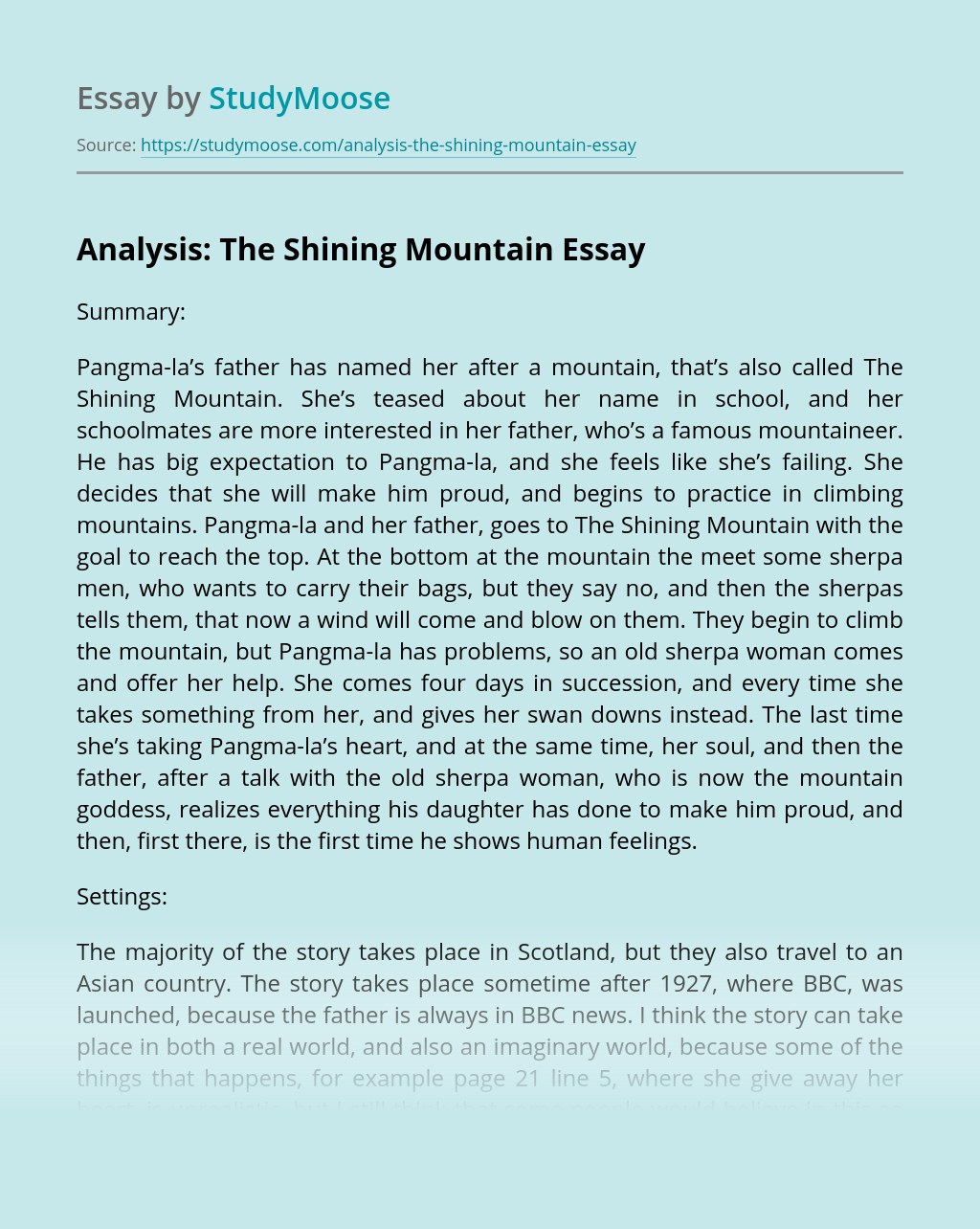