Charles Dickens and Steven king lived in different times in history. In comparing my chosen texts I found interesting comparisons, similarities and differences in the social, cultural and historical issues, which I shall explain.

‘A Christmas carol’ was written in 1843, probably for children to teach them not to grow up to be as spiteful as the main character in the novel. the main character, Ebenezer Scrooge, is haunted by three spirits who are sent to help him change his ways and become kinder to everyone.

Don't use plagiarized sources. Get your custom essay on
“ The comparison of Charles Dickens ‘A Christmas carol’ and Steven king’s ‘The Shining’ ”
Get custom paper
NEW! smart matching with writer

The book is set in London on Christmas Eve. Christmas seemed to be an important occasion for everyone; even if they are poor they still insist on enjoying Christmas, ‘though it has never put a scrap of silver… …god bless it!’ This was probably because cultures didn’t really mix then, so there were few other religions in England, and almost everyone celebrated Christmas.

‘The Shining’ is also set around Christmas over one hundred years later, but Christmas isn’t so important for this family, as in the book you never hear about Christmas day, only the time before and after the date.

There is only three in the family, unlike in dickens’s time the families were bigger, so this may be why the family doesn’t celebrate much. When Steven King wrote this novel Christmas had become a lot more commercialised, where as in the time dickens wrote his novel Christmas was strictly a religious festival. Also, what must be taken into consideration is that because of the cultural mixes this family may be only celebrating Christmas for the child’s sake.

Social issues in the two books are not too different. Scrooge treated people differently according to their status. This was shown who two gentlemen came asking for money for the lower classes of society and scrooge wouldn’t donate anything. He believed that because he pays for union workhouses and treadmills that he should not have to give them any more money, ‘I cant afford to make idle people merry.’

In ‘the shining’ even though the lower classes now get help with money and jobs from the government, there are still some small mined people, just like scrooge, who looks down on those less fortunate than themselves. Mr Ullman, the owner of the hotel in which the family would be staying in over the winter, patronizes jack while e interviews him. Jack is the father of the family. Jack’s previous job was as a teacher, but once he developed a drinking problem and abused a student, he got dismissed from his position. As this was over a year ago in the jack had recovered from his problem but Ullman still didn’t trust him to take care of his hotel over the winter, ‘your last position of trust, you lost your temper, I don’t believe we need to say any more.’

In the two novels the super natural theme links them. However, the historical issues effect how people react to the theme in the book. ‘A Christmas carol’ was first published in 1843; this was just before Darwin’s theory was announced in 1858. Before Darwin and his theory of evolution, people enjoyed and were prepared to believe in what the church told them. Where as when Steven king wrote his novel Darwinism was ‘a fact of life.’ This accounts for the social differences in the two novels and the reactions of the people in the novel.

In ‘a Christmas carol’ scrooge, even though he had just seen the ghost he still denied it, ‘Humbug, I wont believe it.’ Also, as well as Darwinism not being known, there were probably not many films, books or articles written with a super natural theme.

In the 1960’s the were many supposed UFO sightings in the USA, so even before the book was written in 1977, people were becoming a lot more open minded about super natural beings. The film industry had also developed a interest in making films with ghosts, aliens and other supernatural forces in keeping with the events of the era.

In ‘the shining’, people believed that Danny had been seeing ghosts, and that he had been born with the gift of the shining, ‘you shine on, harder than anyone I’ve ever met.’ The chef, the man who said that to Danny, also had the shining. However Danny’s dad, jack was like scrooge as they both denied the experience of the ghosts ‘nothing there, not a thing.’ This is because they were too scared of the implications if the ghosts really did exist.

The comparison of Charles Dickens 'A Christmas carol' and Steven king's 'The Shining'. (2020, Jun 01). Retrieved from http://studymoose.com/comparison-charles-dickens-christmas-carol-steven-kings-shining-new-essay 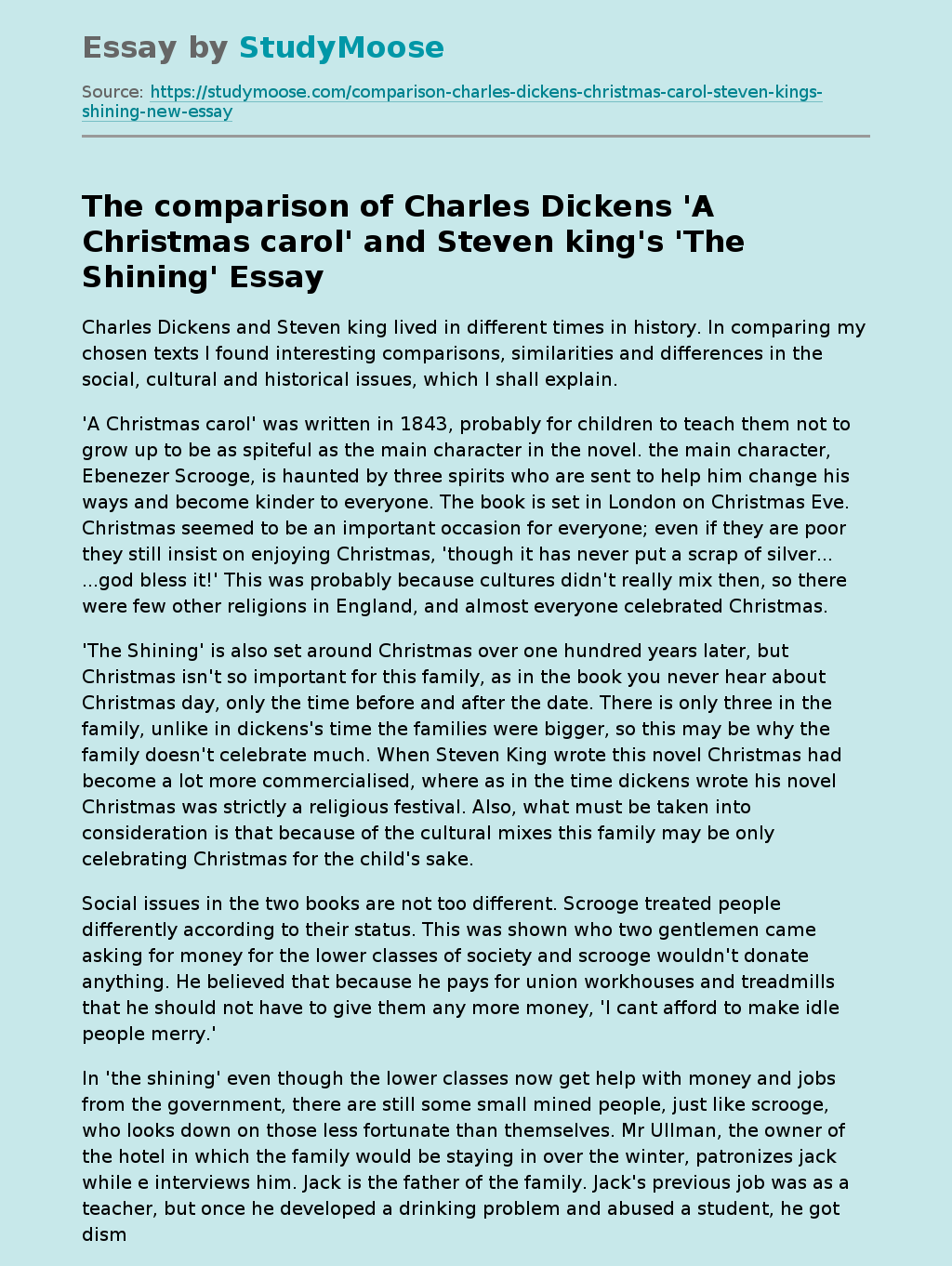