Money In "A Christmas Carol"

‘Generosity is not just about the giving of money’. How is this idea explored in a Christmas carol? Charles Dickens’ allegorical tale ‘A Christmas Carol’, explores ideas about generosity, and explains the idea that generosity can be understood in ways that do not involve the giving of money. The stories used by Dickens to exemplify this idea are mostly about the generosity of spirit shown by people who are unable to give money; the poor, the burdened and the children.

Dicken’s position seems to be to contrast that whilst the rich and the powerful can sometimes ignore the cries for help from the poor and the weak, exemplary acts of generosity often come from people who have nothing material to give.

Don't use plagiarized sources. Get your custom essay on
“ Money In “A Christmas Carol” ”
Get custom paper
NEW! smart matching with writer

As Marley said “Mankind was my business.” In the beginning of the novella, the main protagonist, Ebenezer Scrooge, opposes Christmas and all the kind-hearted, charitable values it stands for. Throughout the tale Scrooge is visited by Ghosts from a Christmas past, present, and future, who show the “bitter” Scrooge how to be compassionate towards others.

Money is a big part of the story, and it plays a role as a contrast to how generosity is viewed. Scrooge is rich but lives a life as “solitary as an oyster” and “warning all human sympathy to keep its distance.” He initially supports the inhumanity of cold-hearted decisions made by governments with his response to the charity collectors being, “Are there no prisons?… And the Union Workhouses. Are they still in operation?” He feels no compulsion to give charity to support meagre gifts to the poor and dispossessed and dismisses the collectors with “I cannot afford to make idle people merry” and with suggestions that such people would be better dead to “reduce the surplus population.

These suggestions contrast sharply with the generosity of both his nephew, Fred and his clerk, Bob Cratchit. His nephew remarks that Christmas is “a good time: a kind, forgiving, charitable, pleasant time.” He encourages Scrooge to think of the people around him with some warmth and compassion and to treat those that are poorer than him with some respect. He reminds Scrooge “to think of people below them as if they are really fellow-passengers to the grave,” not just “another race of creatures” to exploit. His clerk, Bob Cratchit, is poor but still shows generosity to his wife and children, to others and even to his exploitative employer, Scrooge.

A generous spirit can go a long way, in helping others. Dickens explored this theme through Christmas-a time most people think of giving to others. Christmas is a time for giving, and it shows most humans in their best light. Dickens sets up Christmas, as the best of us, morally. The “old sinner” Scrooge, is someone who despises Christmas, and this notion of joy towards it, and other people. He questions “the reason to be merry”. Dickens uses Scrooge as an antagonist for Christmas. In contrast we see people like Fred, Scrooges nephew, or Tiny Tim, who are lovers of all the joys of Christmas, including the joys of meeting and greeting others. Dickens use of Christmas as the centre piece for his novella, ties in well with the theme of generosity. If this book was set at a different time of year, it would not have the same effect on the reader because Christmas is a time we associate with generosity.

Tiny Tim is a perfect example of this, someone who is dying but still has the spirit to “bless everyone.” Tiny Tim didn’t have a lot to give, but he gave all he could through his generous spirit. Money plays a big role in the story, and it is something we often think of when we talk about generosity. In particular we think about charity, or giving to someone less fortunate. However money isn’t the important part about generosity. It’s the manner in which you give the money that makes it a generous act. Scrooges nephew, Fred, is the first example of generosity when he praises Christmas as “the only time when men and women seem by one consent to open their shut up hearts freely.” Fred’s language indicates that, for Dickens, generosity involves more than the giving of money. Giving of money is a good thing, and it can help many people who are in need of it. In this particular story, money is very helpful for the Cratchit’s and the continued life of Tiny Tim.

Scrooge offered Bob “a raise in salary” to assist “his struggling family.” This act was eventually done out of the bottom of Scrooge’s heart, and was accompanied by Scrooge’s desire to be a second father to Tiny Tim and the other Cratchit children. If Scrooge had attempted to offer money to Bob at the start of the novella, we as readers would not see it as a generous act because we have been led to believe that Scrooge isn’t someone who feels compassion for others. Scrooge giving the Cratchit’s money is irrelevant; its only seen as generous if the act comes through nobility and a willingness to give without receiving anything in return, other than the pleasure of giving. If generosity is all about the giving of money, then those who have no money cannot be generous. Generosity would therefore be limited to people of wealth.

This wouldn’t fit with the point Dickens is trying to explore, that generosity is not just about giving money. It involves a much deeper compassion towards someone that may be less fortunate than you. In the story we see people who are living in poverty, who still make considerate gestures of spirit. We also see people of wealth making generous gestures. Mr Fezziwig, a former employer of Scrooge, shows us this when the Ghost of Christmas Past takes Scrooge back to one of Fezziwig’s parties. In this stave we notice that even though Fezziwig is wealthy, with his “organ of benevolence” he is still kind-hearted and sentimentally attached towards everyone at his party. As Scrooge said to the spirit of Christmas past, “Happiness he gives is quite as great as if it cost a fortune.”

Dickens also takes the reader a further step. Generosity may be displayed by individuals towards people who they do not know. The rich and powerful can lobby on behalf of the poor and weak when government philosophies and policies are cruel and inhumane. This involves a form of generosity without reward. The charity collectors who visit Scrooge’s office in the first stave exemplify this. After being visited by the Ghosts and reproached for his own inhumane attitudes, Scrooge is also eventually able to see that generosity can be given towards others without knowing them.

Money In "A Christmas Carol". (2016, Apr 26). Retrieved from https://studymoose.com/money-in-a-christmas-carol-essay 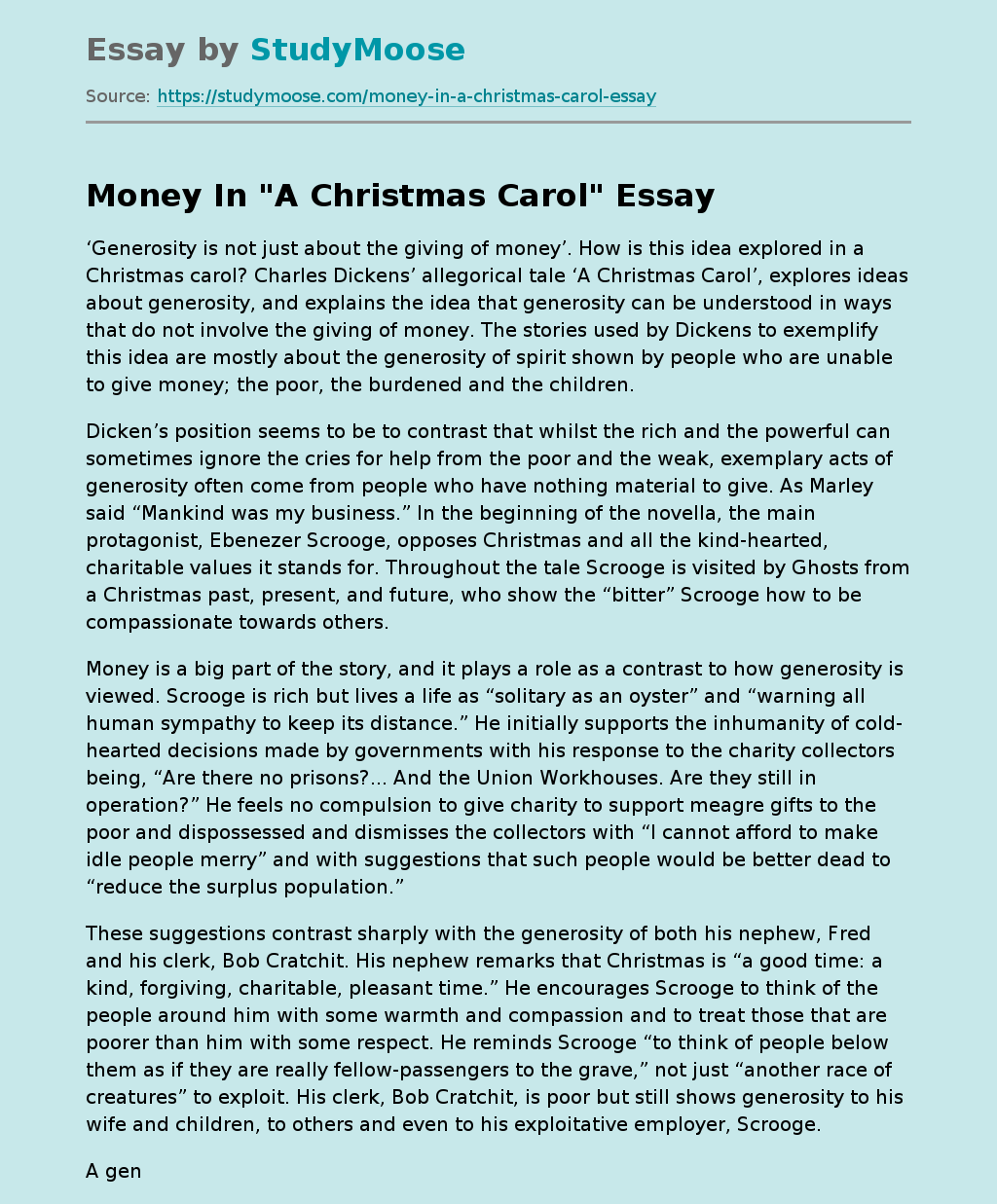