The self-analysis of your personality

There are many different theories on personality and many different approaches. I am going to talk about the Trait, Cognitive, and Motivational approaches and how they apply to me as an individual.

Trait theory is based on several assumptions. The first assumption is that any difference between people that is seen as significant will have a name. The second is that these names, knows as traits, and are conceived of as continuous dimensions. In general, Trait Theory assumes that people vary simultaneously on a number of personality factors.

Don't use plagiarized sources. Get your custom essay on
“ The self-analysis of your personality ”
Get custom paper
NEW! smart matching with writer

The Trait Theory that I am going to use, is the Five-Factor Model (FFM), or The Big Five. The FFM says that the five major categories of traits are Open mindedness, Conscientiousness, Extraversion, Agreeableness, and Neuroticism. (OCEAN) In order to apply the FFM theory to my life, I tool the NEO-PI test. I will list my results while trying to explain more about myself.

Extraversion is marked by pronounced engagement with the external world.

Extraverts enjoy being with people, are full of energy, and often experience positive emotions. They tend to be enthusiastic and action-oriented They like to talk in groups, assert themselves, and draw attention to themselves. I scored “high” on the Extraversion part of the test. This means that I am sociable, outgoing, energetic, and lively. I prefer to be around people much of the time. It rated me on subcategories under extraversion. In order from the highest (most noticeable traits in me) to the lowest (traits that are not strong in me) here is how I scored: Friendliness, Gregariousness, Assertiveness, Activity Level, Excitement seeking, Cheerfulness.

I was very disappointed to not be considered more cheerful.

Agreeableness reflects individual differences in concern with cooperation and social harmony. Agreeable individuals value getting along with others. They are therefore considerate, friendly, generous, helpful, and willing to compromise their interests with others’. Agreeable people also have an optimistic view of human nature. They believe people are basically honest, decent, and trustworthy. According to the test, my level of Agreeableness indicates a strong interest in others’ needs, and a concern for their well being. I am pleasant, sympathetic, and cooperative. It also rated me on subcategories under agreeableness. In order from the highest (most noticeable traits in me) to the lowest (traits that are not strong in me) here is how I scored: Modesty, Altruism, Sympathy, Trust, Morality, and Cooperation. While I scored very high in most of the subcategories, and the category as a whole, apparently I am not very cooperative, because I only scored a 4/100 in that area.

Conscientiousness concerns the way in which we control, regulate, and direct our impulses. Impulses are not inherently bad; occasionally time constraints require a snap decision, and acting on our first impulse can be an effective response. Also, in times of play rather than work, acting spontaneously and impulsively can be fun. Impulsive individuals can be seen by others as colorful, fun-to-be-with, and zany. I scored low on Conscientiousness, indicating that I like to live for the moment and do what feels good now. My work tends to be careless and disorganized. I was also rated on subcategories under Conscientiousness.

In order from the highest (most noticeable traits in me) to the lowest (traits that are not strong in me) here is how I scored: Dutifullnes, Self-Efficacy, Self-discipline, Achievement striving, Cautiousness, Orderliness. This is actually very sad but true. While I have a strong sense of duty, I tend to be very unorganized, messy, and a procrastinator. I am confident that I have the ability to get things done, yet sometimes lack the motivation to do so. I tend to act before I think, and it can get me in a lot of trouble.

Neuroticism refers to the tendency to experience negative feelings. Those who score high on Neuroticism may experience primarily one specific negative feeling such as anxiety, anger, or depression, but are likely to experience several of these emotions. I scored high on Neuroticism, indicating that I am easily upset, even by what most people consider the normal demands of living. People consider me to be sensitive and emotional. I was also rated on subcategories under neuroticism. In order from the highest (most noticeable traits in me) to the lowest (traits that are not strong in me) here is how I scored: Anger, Immoderation, Vulnerability, Anxiety, Depression, self-consciousness. Unfortunately, this is moderately accurate. I don’t think it is this extreme, but I am highly anxious, and have been put on anxiety medications before. I tend to be high strung and worry a lot. I expect a lot out of people, and myself, and when things don’t go according to my plans, I get mad.

Openness to Experience describes a dimension of cognitive style that distinguishes imaginative, creative people from down-to-earth, conventional people. Open people are intellectually curious, appreciative of art, and sensitive to beauty. They tend to be, compared to closed people, more aware of their feelings. They tend to think and act in individualistic and nonconforming ways. Intellect is probably best regarded as one aspect of openness to experience. My score on Openness to Experience is high, indicating that I enjoy novelty, variety, and change. I am curious, imaginative, and creative. My strengths in this category starting with the strongest are: Imagination, Emotionality, Artistic interest, Intellect, Adventurousness, Liberalism.

So according to this, I am loyal, anxious, unorganized, adventurous, smart, zany, modest, and altruistic. That sounds about right.

The cognitive approach deals with units associated not with traits, but with a person’s thought processes, including memory, perception, and language. It refers to how a person processes information concerning the self, and the environment. One of these theories is Julian Rotter’s Social Learning Theory, and that is what I am going to be discussing in terms of myself.

Rotter has four main components to his social learning theory model predicting behavior. These are behavior potential, expectancy, reinforcement value, and the psychological situation. Behavior potential is the likelihood of engaging in a particular behavior in a specific situation. In other words, what is the probability that the person will exhibit a particular behavior in a situation? In any given situation, there are multiple behaviors one can engage in. For each possible behavior, there is a behavior potential. The individual will exhibit whichever behavior has the highest potential. For instance, I am pregnant, so in a situation where ice cream is being given out, there is a high probability that I will eat the ice cream.

Although the psychological situation does not figure directly into Rotter’s formula for predicting behavior, Rotter believes it is always important to keep in mind that different people interpret the same situation differently. Again, it is people’s subjective interpretation of the environment, rather than an objective array of stimuli, that is meaningful to them and that determines how they behave. This states that I can interpret a situation completely different from someone else so then our expectancies would change.

In the simplest of terms, the motivational approach asks the question, why? Why do we act like we do? We have to consider what our motives are for doing things. The theory I am going to use for this is Freud’s Drive theory.

Sigmund Freud proposed that the human psyche could be divided into three dependent parts, the id, the ego and the superego. The first of these “consisted of amoral, irrational, driving instincts for sexual gratification, aggression, and general physical and sensual pleasure. The superego constituted the external moral imperatives and expectations imposed on the personality by its society and culture. The ego stood as the mediator between the impulses of the id and the asceticism of the superego. The ego allowed the personality to cope with the inner and outer demands of its existence.

In my life, the Id would be represented in many ways. I am now 6 months pregnant, so obviously my Id produced a need for sexual pleasure. I tend to be very aggressive and crave instant gratification. These are the subconscious desires of my Id, according to Freud. However, the Id is not the strongest, in my life, between the id, ego, and superego.

Then there is the Superego, which is an icon for the moral branch of our reasoning, and contains the ideals and thoughts that we strive for, and how we expect to be punished for not meeting those ideals. For instance, my Superego prevents me from taking money from the petty cash box at work. I could probably very easily take it, but I know that it is wrong and understand that I will be punished if I do so. This part of my mind urges me to follow the laws, and abide by the ethics that govern me. This lets me know the nature and order of things, and tells me to respect that. That is why I am a good, law-obeying citizen, because my Superego is a strong force in controlling my behavior.

The third part is the Ego. The Ego tries to take what the Id wants, and make it happen, while still keeping accordance with the Superego. It puts my desires, demands, and thoughts into reality for me. My ego controls me in certain ways, and allows me to express my Id, without offending my Superego. For instance, Id desires sex, yet my Superego wants to be ethical, therefor my ego governs that it is ok for me to have sex, but not with my friends husband. Or not at church. Or my Id desires that I be aggressive and physical, so my ego lets me be aggressive, but lets my Superego tell me that I can’t be so aggressive that harm or offend another person.

I have now explained the three major approaches to personality, and described a theory of each, and how they relate to me. Out of all the research I did, I found that the FFM was the most accurate in describing who I am.

The self-analysis of your personality. (2016, Jun 25). Retrieved from https://studymoose.com/the-self-analysis-of-your-personality-essay 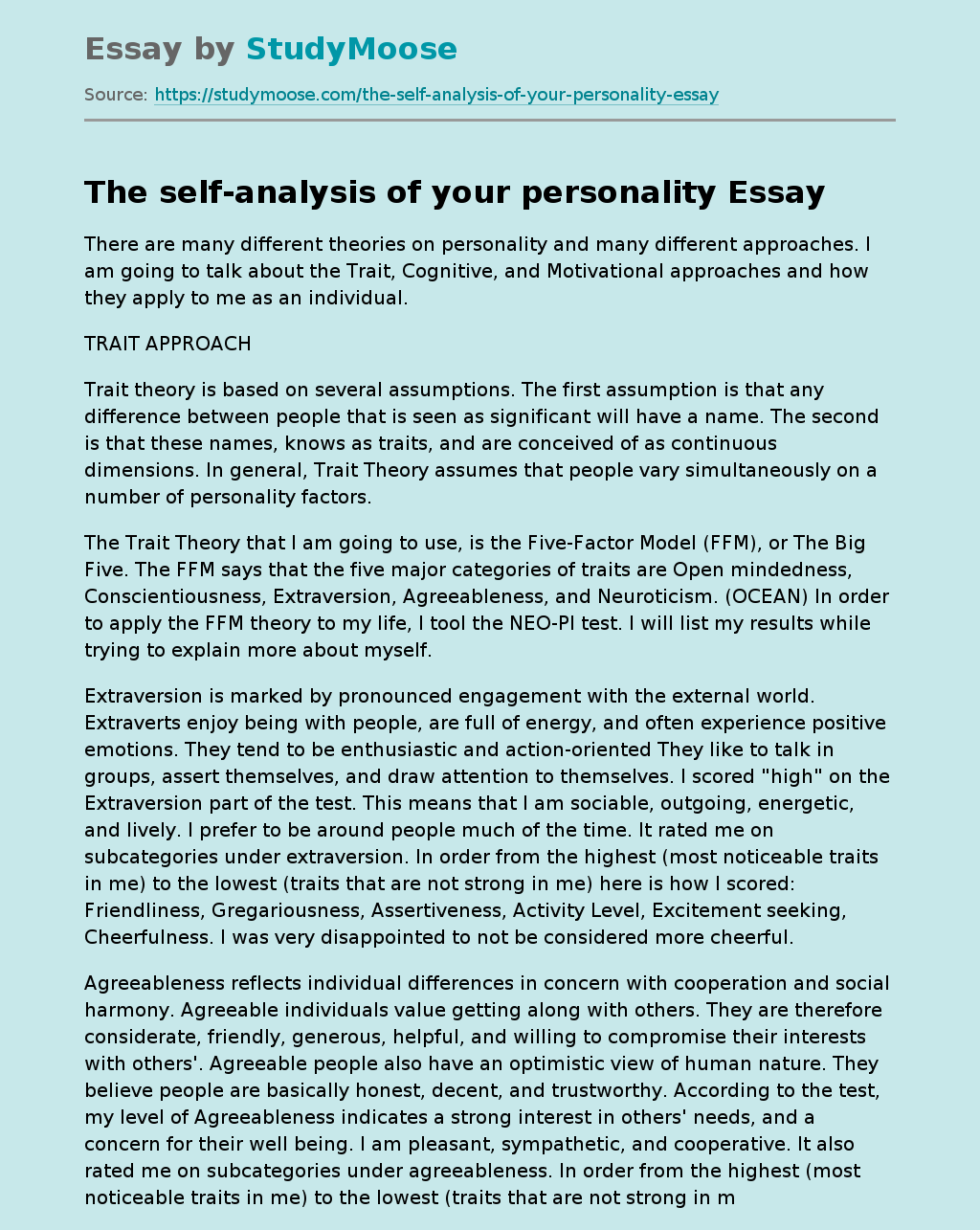