the Secret Life of Walter Mitty

Don't use plagiarized sources. Get your custom essay on
“ the Secret Life of Walter Mitty ”
Get custom paper
NEW! smart matching with writer

He is lost in fantasy life and is not focusing much in his actual life. The tragedy is he will never achieve the fantasies that he is dreaming about. He spends more time day dreaming in fantasy world than paying attention in his real life. When he was bored driving, he started day dreaming of becoming different kinds of things. All fantasies of Mitty were incomplete at the end and didn’t reach a conclusion so the reader wouldn’t know if he achieved victory of loss.

The fantasies were interrupted in most situations. When Mitty was driving the car too fast his wife says, “Not so fast! You’re driving too fast! What are you driving too fast for?” This shows that Mitty is not concerned about what he is doing in actual life but he into the character of a person in fantasy. In fantasy, Mitty becomes the character of pilot, surgeon, being in courtroom, Air force pilot, etc.

But he is not sure or confident about what he is doing in his actual life. He is lost in fantasy world and doesn’t pay attention to what is happening around him. In fantasy life Mitty is really bold, brave, appreciated and respected by many people but it does not apply to real life because he is an ordinary person. He is dreaming of becoming special and valuable person. But people around him are making fun of him and laughing at him in actual life. His wife is bossy so he has to agree to whatever she tells him and he is not happy with his life. Mitty was told by his wife to drive slowly, reminded by parking lot attended as he was driving in wrong lane, women who was passing by laughed as he said “Puppy Biscuit” to himself. And the women thought he was crazy for saying puppy biscuit for no reason.

Mrs. Mitty tried to find Mr. Mitty but couldn’t find anywhere and when she finds him sitting in old chair she said, “I’m going to take your temperature when I get you home” Mitty is dominated by his wife and he needs to get reminded by his wife to do things correctly. Mitty is absent-minded driver and he forgets things easily. Mitty bought overshoes but he couldn’t remember the other thing his wife had told him to buy. He has stress in his life and he tries hard to remember the second thing his wife had told his to buy as Mrs. Mitty had told him two times before leaving.

He hated these weekly trips to town as he was always getting something wrong. When Mitty was in the store he couldn’t remember the brand of puppy biscuit so he describes it. He wants his olden days back where he could do many things but now he is old and his wife reminds him he is not a young man any longer. Mitty is dreaming all the good qualities he doesn’t have. Therefore, the story is tragic because he doesn’t like his actual life as it is boring so he is lost in his fantasies and he is always disturbed at the end of his fantasy, his wife is bossy so he has to follow his wife’s instruction, he does not have the qualities he dreams which he really wants as a person.

the Secret Life of Walter Mitty. (2016, Mar 26). Retrieved from https://studymoose.com/the-secret-life-of-walter-mitty-essay 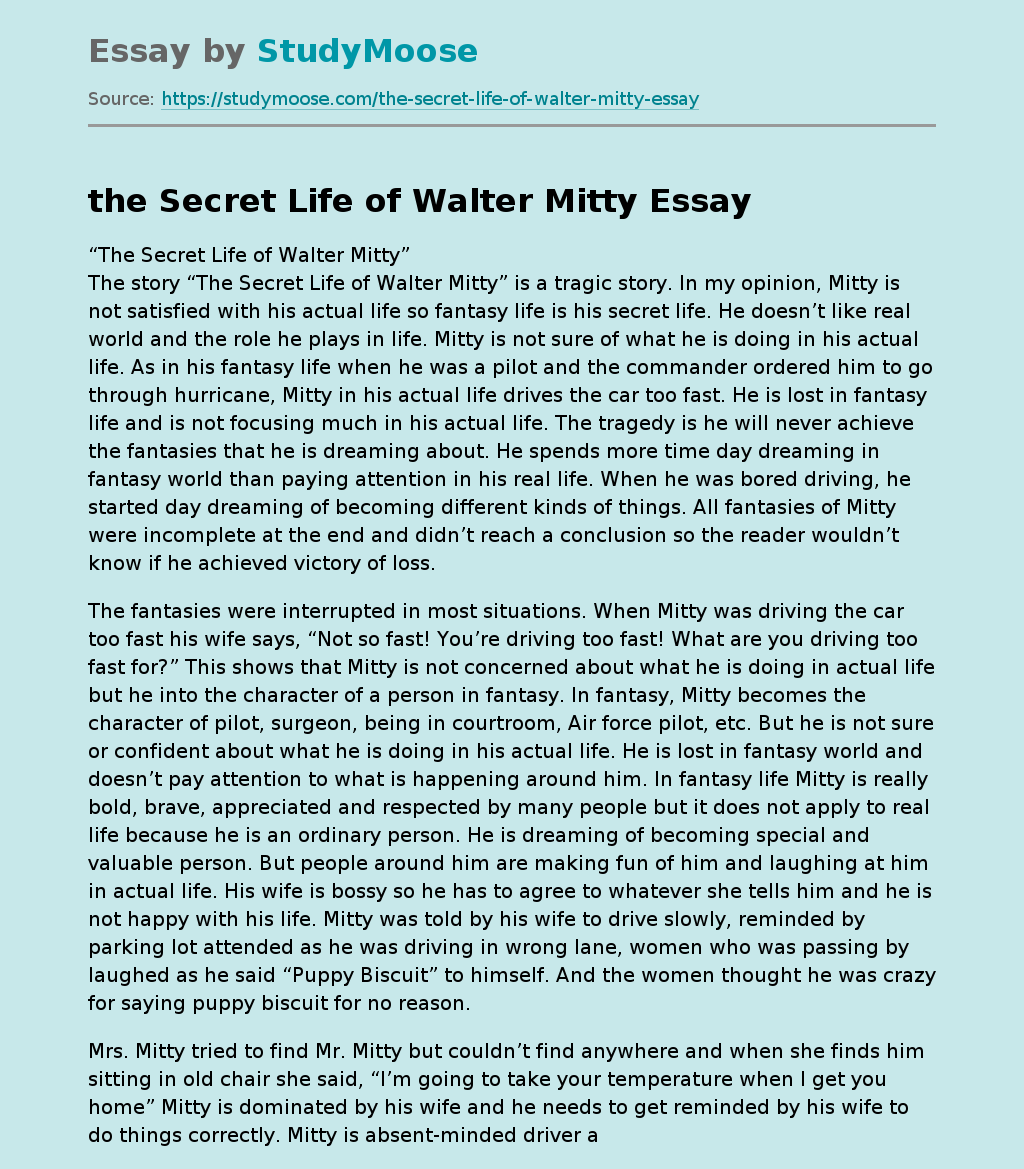