Review of the film "The Secret Life of Walter Mitty"

The film “The Secret Life of Walter Mitty” was shot in 1947, just after the World War II. It is produced by Samuel Goldwyn and directed by Norman Z. McLeod, famous American film director, cartoonist and writer, who made several successful and influential movies such as “Taking A Chance” (1928), “Monkey Business” (1931), “Horse Feathers” (1932), “Alice in Wonderland” (1933) and others. Scriptwriters of “The Secret Life of Walter Mitty” are Ken Englund, the president of the Writers Guild of America West, Everett Freeman and Philip Rapp.

Don't use plagiarized sources. Get your custom essay on
“ Review of the film “The Secret Life of Walter Mitty” ”
Get custom paper
NEW! smart matching with writer

Stars are Danny Kaye, an American actor, singer, dancer, and comedian; Virginia Mayo, an American film actress; Boris Karloff (the real name is William Henry Pratt); Fay Bainter, an American film and stage actress; Ann Rutherford, a Canadian-American actress in film, radio, and television, and others. The film was shot in the USA and it describes the life of Americans of 1940-1950.

The film tells the story about a proofreader of “Pierce publishing company” whose name is Walter Mitty.

He is from Perth Amboy, New Jersey. Mitty lives with bossy mother who gives orders to Walter and wants him to marry beautiful but capricious Gertrude Griswold. Walter is a meek, kind and modest man who would not say boo to a goose, but he dreams about adventures. At one moment Mitty imagine himself as a captain of a ship, which has got into storm, at another he thinks that he is a surgeon of genius who saves the life of dying man and fixes the broken anesthetizer. Sometimes Walter Mitty conceives of being a courageous pilot of military airplane who has struck many hostile planes, sometimes he is a tremendous card player or brave cowboy who saves the life of a pretty woman, or famous fashionable designer of women’s hats.

Walter tries to conceal his double life from surrounding people, but he does not manage to do it. Everybody just call him “a daydreamer”. Mitty is always forgetting things that he should do, so he puts them down in his black notebook. However, it does not help, he is constantly confusing things and gets ratings from mother. Suddenly adventures enter in Walter’s real life, and he understands that it is not easy to cope with dangers. Walter meets a beautiful woman whose name is Rosalind van Hoorn. She gives him a small black book with maps of Dutch crown jewels hidden from the Nazis during World War II. Rosalind is being pursued by a band of jewel thieves headed by Dr. Hugo Hollingshead, a sly psychiatrist who manages to convince Walter that he is simply imagining things again, and that Rosalind never existed. In spite of all difficulties, Walter rescues the girl from thieves, marries her and makes his promotion. He promises to get rid of his illusions and live his life.

In my opinion, casting was performed perfectly. Danny Kaye, who stared as Walter Mitty, managed his work very well. He fitted in with his role harmoniously and organically. Being a comedian, Danny Kaye showed his character strikingly and completely, and his acting provoked many feelings, from laughter to sympathy. I am not able to imagine more suitable actor for this role. Virginia Mayo, who stared as Rosalind von Hoorn, fitted in with her part wonderfully, too. She had an irreproachable appearance and a nice smile, and she corresponded with her role excellently. All other actors coped with their work wonderfully, especially I liked Boris Kaloff acting as Dr. Hollingshead whose performing was as convincing and frightening as a negative character should be.

The film is based on the James Thurber’s short story of the same name. However, there are many differences between the story and the film. Firstly, there are more dreams of Walter Mitty in the film. In the story we can see only five Walter’s dreams, and the film has six. Moreover, Norman Z. McLeod substituted some dreams for another, for example, there is no court and capital punishment in the film, but it has card game, fashion show and fight of cowboys. Secondly, the film has much more complex plot with involved development of events and much more number of characters (the short story has just several characters). Thirdly, in the film Walter Mitty has a job of a proofreader in the publishing company, but from the story we cannot understand the Walter’s occupation. In addition, the director substituted the wife of Walter for his mother (Fay Bainter in the role of Mrs. Mitty). I think that Norman Z. McLeod made these changes in order to extend the plot and make the film more interesting and exciting. In my opinion, the director used only the concept of the Thurber’s short story and got other elements (structure, characters, and new scenes) on it. Besides, Norman Z. McLeod added some details to expose the nature of the main character. For example, the episode when Mr. Mitty feeds pigeons shows him as a kind, gentle and caring person. From another scene, when a Walter’s boss speaks at the staff meeting with idea of producing hospital love stories, we can draw a conclusion that Mitty is a creative and bright man because he was the first to suggest this idea. In the whole movie Walter Mitty is embodied as a clever, kind, resourceful and responsive, but too gentle and dreamy man whose fantasy is not accepted by society.

The director uses many devices to show episodes more convincingly, vividly and similarly to reality. For example, camera is located very close to face of characters when their emotions and feeling are shown. Also, blue light and smoke always appear during Walter’s dream as symbols of unreality. Furthermore, during the action camera twitches and moves fast in order to convey the tension of events. Moreover, music and sounds are of great importance in the film. We can hear light music during funny and ridiculous scenes and solemn music when the action, adventures, chases and Walter’s dreams of heroic exploits occur.

Atmosphere of the film is very jolly and natural. In spite of the detective plot with murders and pursuits, we watch it with smile and laugh. Costumes of the forties, old cars, buildings and music transfer us to the postwar time. Show of hats, which is performed in one of scenes, demonstrates to us topical fashion trends of the forties. Moreover, we are able to judge the period of history, which is presented in the film, from the fact that Rosalind has a black book with maps of Dutch treasures hidden from the Nazis during World War II. Thereby, all details of movie correspond to time and place of the action.

James Thurber scorned the film. He was extremely unhappy with all the changes made to it. He also hated Danny Kaye’s performance as Mitty, since it was “nothing like how he had originally conceived of the character”. Thurber believed the film to be a “vulgar bastardization of his work”. It is even says that, when James Thurber read the script, he offered producer Samuel Goldwyn $10,000 to not make the film. I suppose that James Thurber did not like the film of Norman Z. McLeod because the director changed the main idea of the short story and the purpose of author’s work. The film was turned into a comedy with some detective elements though initially the short story was a drama. James Thurber wanted to show the tragedy of an ordinary man, a daydreamer, who was not understood by surrounding people. However, Norman Z. McLeod turned it into the funny story with many ridiculous episodes and the happy end, when the main hero refused all his dreams and became a completely lucky person. I think that James Thurber was unsatisfied with the script because it did not answer the aim of author. This musical comedy was a hit, but it almost has nothing in common with the work of Thurber except the title and concept.

I agree that the film is a wonderful work of the director and the film crew. It is very good motion picture for rest and fun. Besides, I like the way Danny Kaye plays his role. However, I do not think that this movie is an exact screen version of the short story. The director introduced a lot of scenes, which was not in the story, he created new characters and changed the main idea. I suppose it is a very good commercial move in order to adapt the film to the mass audience. People like watch motion pictures that make them smile and laugh, and it was necessary to include humor in the film in order to oblige mass spectators.

In 2013 a new remake of the James Thurber’s short story is planned to shoot by 20th Century Fox, starring Ben Stiller as Walter Mitty. I am looking forward to this remake to compare it with the film of 1947 and the short story.

Review of the film "The Secret Life of Walter Mitty". (2020, Jun 02). Retrieved from https://studymoose.com/review-film-secret-life-walter-mitty-new-essay 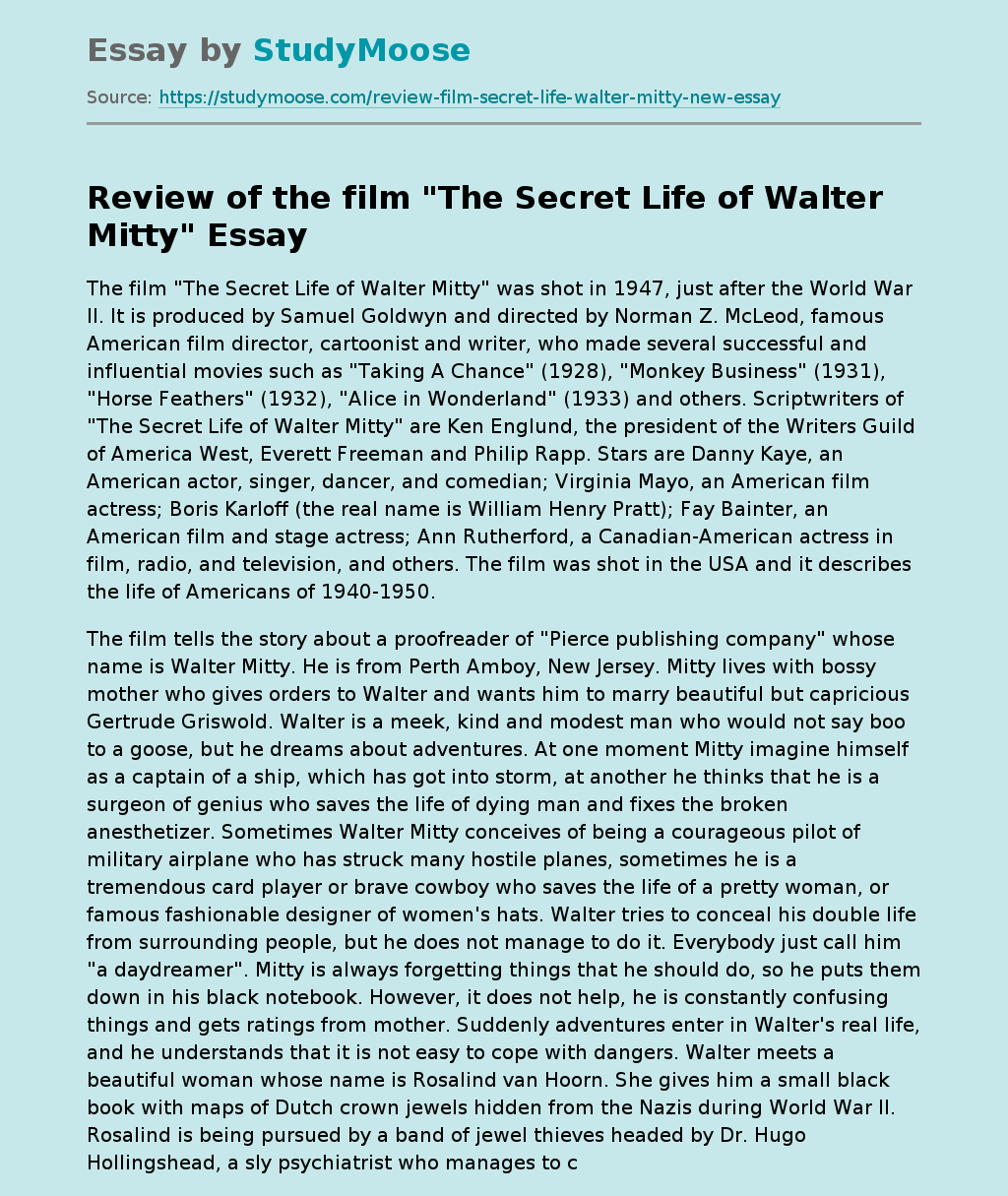