The Scream by Edvard Munch analysis

I was walking along a path with two friends – the sun was setting – suddenly the sky turned blood red – I paused, feeling exhausted, and leaned on the fence – there was blood and tongues of fire above the blue-black fjord and the city – my friends walked on, and I stood there trembling with anxiety – and I sensed an infinite scream passing through nature.

As a young artist, Munch was profoundly influenced by Dostoevsky. “No one in art,” he told a friend, “has yet penetrated as far [as Dostoevsky] into the mystical realms of the soul, towards the metaphysical, the subconscious …” Munch’s great ambition—to paint the life of the soul—found its most important expression in The Frieze of Life, a series of paintings he produced in the 1890s.

Don't use plagiarized sources.
Get Your Custom Essay on The Scream by Edvard Munch analysis Just from $13,9/Page

TheFrieze symbolically recounts the story of an archetypal man and woman as they progress from love and passion, to jealousy and melancholy, to anxiety and death. The Scream, which comes near the end of the cycle, represents the apogee of anxiety, the soul’s final breaking point.

A lone emaciated figure halts on a bridge clutching his ears, his eyes and mouth open wide in a scream of anguish. Behind him a couple (his two friends) are walking together in the opposite direction.

Barely discernible in the swirling motion of a red-blood sunset and deep blue-black fjord, are tiny boats at sea, and the suggestion of town buildings The green hue of the character’s face and his grey clothing is symbolic of sickness and death in regards to his psychotic mental state. The red sky creates a sense of alarm, and highlights the intensity of the character’s experience. Munch employs wavy brushstrokes to emphasise the situation that the character is feeling. Bold, curved strokes in the sky and river, make the viewer experience a sense of nausea. It gives the impression that the character is experiencing emotional agitation, and that his perception of the world may not be a true one. Contrast between the bright colors of the background and the dull, dark colors of the character create a sense of detachment.

Although the figure is standing amidst a normal environment, he feels disconnected from reality. The figure is juxtaposed with the people on the bridge – blurry and vague- giving a sense of segregation and isolation. The character feels alienated from those around him and from the real world. Munch uses a shallow pictorial space, and has utilised frontal figures.

These poses produce the most convincing images of psychological conditions, adding to the painting’s monumental and static quality. The composition, colors and dramatic use of perspective, the undulating curves of the landscape and hollow figure personify alienation and anxiety. The image reflects upon human emotions, and how our relationships with others, and with our environment can affect us. The visual also deals with the human need to be acknowledged, and need for a sense of belonging. Explain what is distinctively visual in this painting and for each visual element describe the technique used and how it creates meaning.

Salvador Dali’s The persistence of Meaning

The Scream by Edvard Munch analysis. (2016, Apr 18). Retrieved from https://studymoose.com/the-scream-by-edvard-munch-analysis-essay 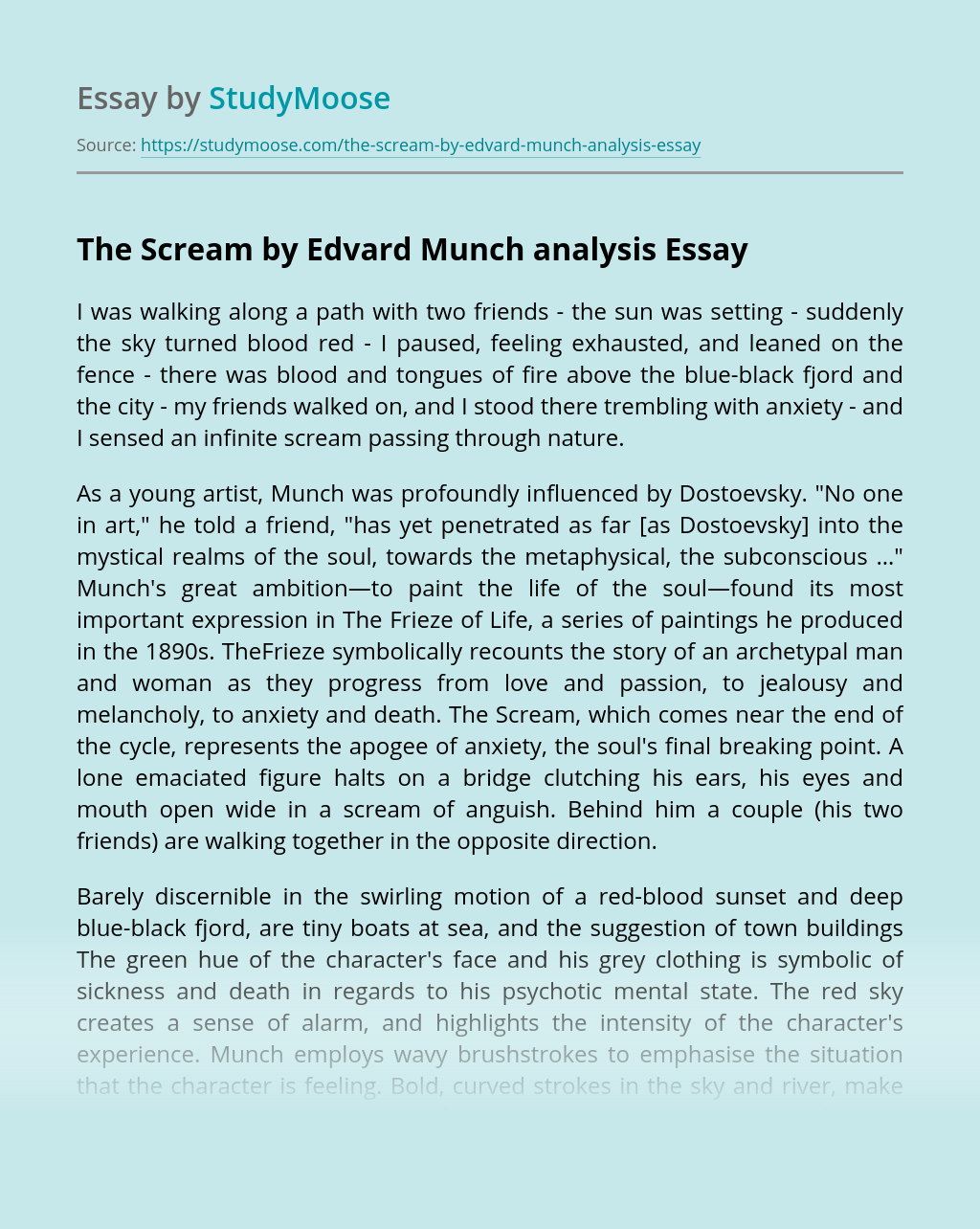 I can finally rush home and get to my favorite part of the day– nap time. Why do you suppose so? Because after staying up for an important assignment until midnight, the lack of sleep makes my morning extremely tiresome and dull. After hours of boring classes, I am finally able to replenish my energy....

Introduction Joyce Travelbee was born in 1926 and is well known for her contribution and work as a nursing theorist. In 1956 earned her degree as a Bachelor in Nursing from Louisiana State University, later in 1959 received the degree of Master in Science at Yale University. During most of her carrier she dealt with...

Papa’s role in the community is vital in its functioning: he the prime contributor to its people by donating money to the church and church related organisations. He uses his newspaper, The Standard as a form of rebellion against the corrupt military government which proves that he is trying to better the country. His relationship...

View sample
Why Laws are broken

This topic asks us why so many laws are broken everyday and what can be done to prevent people in society from breaking the law. Don't use plagiarized sources. Get Your Custom Essay on The Scream by Edvard Munch analysis Just from $13,9/Page Get custom paper The temptation to break a law is sometimes too...

View sample
Catcher in the rye