In Cotton Mather’s account of the trial of Martha Carrier, the witnesses use confessions of other witches incriminating the accused, physical evidence, anger resulting in mischief done to the person, and spectral evidence. Increase Mather would not have convicted Martha Carrier, he would have judged the presented evidence as unreliable because the majority of it was based heavily on witnesses’ testimonies, which Increase Mather did not consider as a valid source, as well as the anger and mischief between Martha Carrier and others, which could purely be coincidental.

Don't use plagiarized sources. Get your custom essay on
“ The Salem Witch Trials: Martha Carrier ”
Get custom paper
NEW! smart matching with writer

Martha Carrier’s own children gave testimonies of her witchcraft. They had “fully confessed not only that they were witches themselves, but that this their mother had made them so.” In the Salem Witch trials, the accused witch was more likely to be convicted with the more details a witness presented. The children “related place, time, occasion; they gave an account of journeys, meetings and mischiefs by them performed, and were very credible in what they said.

” Although Cotton Mather describes these accounts as “credible,” Increase would not have agreed because the hysteria of witnesses caused many false accusations, and these are the testimonies of children with imaginations.

Although their confession was made with “great shows of repentance, and with much demonstration of the truth,” the children were likely imitating what they had seen occur repeatedly in the witch trials, catching on to the hysteria. The next witch confession was from Foster, who said that Carrier “persuaded her to be a witch.

” She then went on to tell that the Devil carried them on a pole to a witch-meeting where they both fell. This testimony would not be approved as reliable by Increase because it is not very detailed, it’s vague. She does not explain how Carrier “persuaded” her, and there is no physical evidence of her supposed injury from this fall.

Evidence resulting from anger and mischief between the accused witch and others was explained by Benjamin Abbot. Carrier had been angry with Abbot because he had laid some land next to her husband’s. Afterwards Carrier threatened Abbot, and it’s stated that “These words were heard by others besides Abbot himself.” Although there is no mentioning of who these other witnesses are that also heard these supposed threats, a factor that Increase would deem unreliable. Abbot acquired sores on his foot and groin, which did not mend until Carrier was taken away by the constable. The healing of his wounds could very well be a coincidence that it just took time for Abbot’s wounds to heal.

This is a false casual connection, as there was more than six weeks in this period of him being wounded, an apt amount of time for any wound to be painful and sit before healing. Then his wife, Sarah Abbot testified that extraordinary and strange conditions came upon their cattle, and their death was something “they could guess at no natural reason for.” Just because the Abbots could not “guess” a reason that the cattle could have died for, does not mean it resulted from witchcraft. Using the word “guess” alone makes this statement unreliable, it is quite possible that many different things could have happened to the cattle that the Abbot couple was unaware of. Increase would not have upheld these testimonies as reliable.

Similar evidence was presented by Allin Toothaker, who had difference with Martha’s son, Richard. When their spat got physical, all of a sudden Toothaker did not possess the power to lift himself from the ground and “he saw the shape of Martha Carrier go off his breast.” This spectral evidence stemming from Toothaker’s testimony is not even technically valid evidence. Stating that he saw the “shape of Martha Carrier” is quite vague. There is no way he could judge that it was Carrier just from seeing “the shape.” This testimony is also suspect because Increase would question why this adult was in a physical fight with the young man Richard Carrier. This testimony could be a way of Toothaker covering up for his wrongdoings. Toothaker also had a wound he acquired from the wars that Carrier told him “should never be cured.”

This is not necessarily a threat, Carrier could have just been stating that the wound was not possible to mend medically, hysteria could have caused Toothaker to misinterpret this statement as a threat. Once Carrier was seized, much like Benjamin Abbot’s story, Toothaker miraculously healed, and he also experienced the strange loss of cattle that could not be explained. These conditions are all purely coincidental, Carrier is not a doctor, so her stating that Toothaker’s wound wouldn’t be cured is irrelevant. The death of Toothaker’s cattle shouldn’t be considered as “strange” and “unnatural,” if other people’s cattle (such as the Abbots’) are passing away as well. Due to these reasons, Increase would not support Toothaker’s testimony as valid evidence against Martha Carrier.

Next John Rogger testified that after “threatening words of this malicious Carrier,” his cattle would be “strangely bewitched.” There is question in this testimony of the actual “threats” given by Carrier, because this is completely unreliable if the witness cannot even describe what was said in more detail. “Strangely bewitched” is also a very vague description and does not prove anything against Carrier, this sounds like an emulation of all the previous testimonies, and Increase would judge this as an unreliable story made up due to the hysteria.

Samuel Preston gave another similar story of his cattle passing away after his experience of having difference with Martha Carrier. He described the cow’s death as a “strange, preternatural, unusual manner.” These adjectives are not actually describing the cow’s death, they are vaguely outlined the witness’ perspective, which is not fact, but opinion. Since Preston did not know how his cow died, he does not state what gave him the basis to make the judgment that this death resulted from supernatural causes. This would be seen as another copy of previous examples of hysteria and wild imaginations when evaluated by Increase Mather.

Another testimony given by Phebe Chandler stated that after Carrier approached her to inquire where she lived, even though she already knew, she heard a voice over her head that “she took to be Martha Carrier’s.” Just because she “took” that this was Carrier’s voice does not make this a definite fact, there is a possibility that Chandler was mistaken. After this voice told her she would be poisoned, there was swelling in her face and hand, and intense pain occurred in these swellings when she saw Carrier’s son, Richard, after which she was struck deaf where “she could not hear any of the prayer, or singing, till the two or three last words of the Psalm.” If Chandler had been struck deaf at the time, she would not have been able to tell there was prayer or singing occurring around her. Increase Mather would judge these statements as false casual connections for these reasons.

Overall, this account of Martha Carrier’s trial is extremely biased with little valid evidence to support its opinions and claims. Increase Mather, being untrustworthy of most witnesses’ testimonies, would not have convicted Carrier based upon the evidence that was presented. These circumstances were casual coincidences that were greatly exaggerated by hysteric people caught up in the witch trials. This is shown through their vague descriptions, lack of details, and the fact that all of their stories were too similar. Based on the way Increase Mather would have evaluated the reliability of the evidence, Martha Carrier would not have been convicted as a witch. 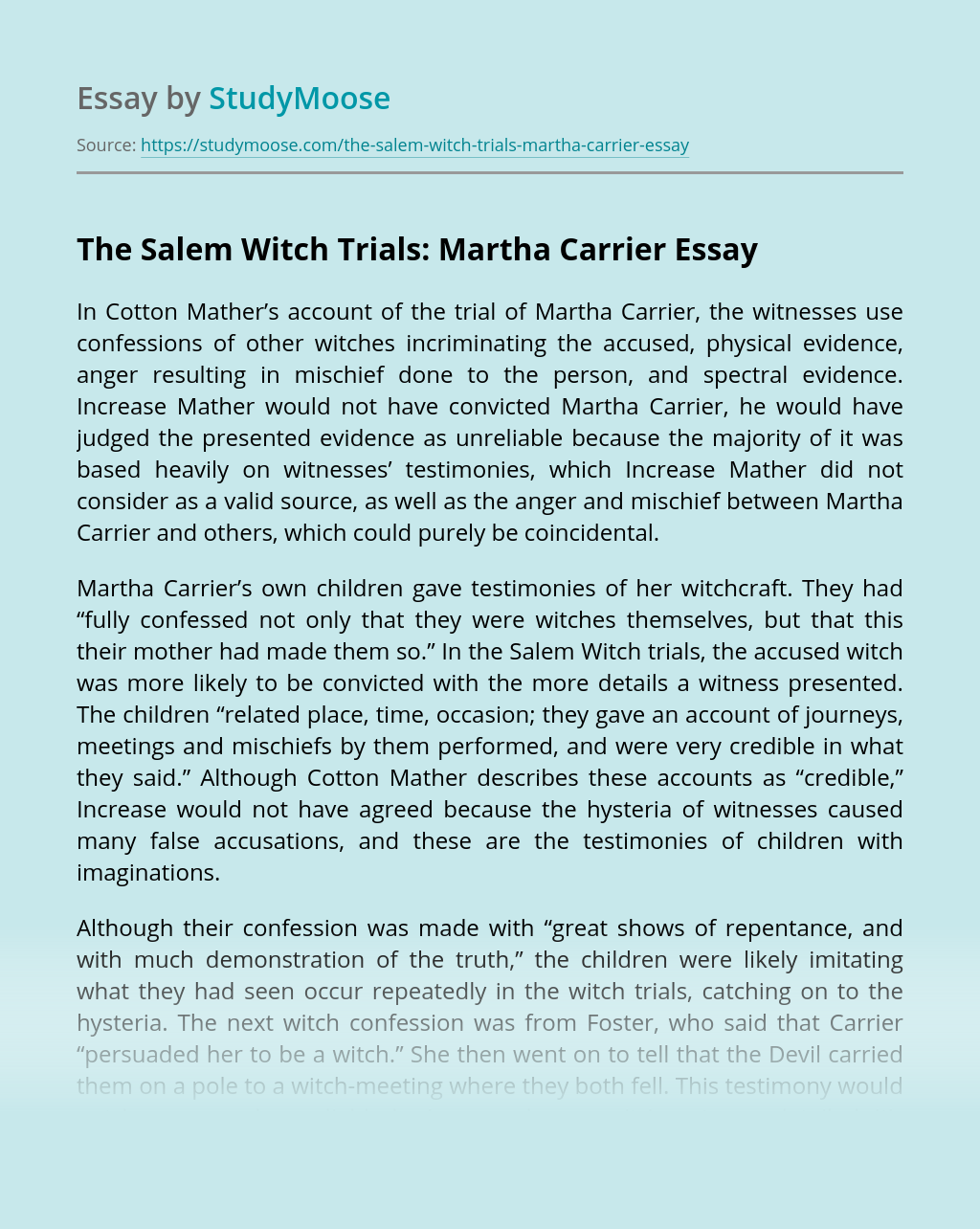