“A Secret Lost in the Water” by Roch Carrier

The story “A Secret Lost in the Water” by Roch Carrier, is about the importance of valuing something before it is lost. I would recommend this story to others because it conveys a strong reverence for nature on a spiritual level, it teaches the reader to value their elders and appreciate the wisdom and knowledge they pass down, and it treasures the relationship between a father and his son.

“A Secret Lost in the Water” should definitely be read by others because it conveys a strong spiritual veneration for nature.

Don't use plagiarized sources.
Get Your Custom Essay on “A Secret Lost in the Water” by Roch Carrier Just from $13,9/Page

The words “Piety” and “Religious” are mentioned whenever the author talks about nature: “My father opened his pocket and cut the branch he selected with pious care.” This quote expresses the appreciation the father has for living things, and shows the spirituality in his gift by using the word “pious”. Later on in the story, the father says, “I’ve just taught you how to find a spring…It isn’t something you learn from school.

” Through this, I can perceive that practicality is more important to the father than complexity.

This story should be read and studied by others because it teaches the reader to value our elders and appreciate the wisdom and knowledge passed down. At the end of story, when the narrator is given a chance to recollect the talent passed down by his father in his early childhood, he struggles to perform the gift. As the narrator fails to hear the gushing water and feel the writhing branch, a fellow farmer says, “Nowadays fathers can’t pass on anything to the next generation.” This quote is very powerful, since it points directly to a message in the story, “Nowadays, children aren’t as willing to accept knowledge from their parents.”

Also, in Roch’s childhood, the father says, “A man can get along without arithmetic, but he can never get along without water.” The water is a metaphor describing the skills and lessons his father taught him, and how the gift is vital to their relationship. Soon after, the father mentions that it was something that his father passed on to him, but now it is lost because the narrator claims that “Somewhere along the roads I had taken from my childhood, I had forgotten my father’s knowledge.” This citation represents the journey mankind is taking today, in the form of a metaphor.

“A Secret Lost in the Water” illustrates and compares the relationship between a father and his child. Roch’s father taught him a gift “you can’t learn from school”; and something that his own father taught him. Roch inherited the gift from his father, but lost it as life went on, as mentioned earlier in the essay. In addition, the farmer too experiences this moral, for he has the “finest farm in the area”, and his children do not want to inherit the farm, in which their father spends his whole life preparing for them. This portrays the social issue in the story, inheritance, and exemplifies the importance of valuing something before it is lost.

“A person without the knowledge of their past history, origin, and culture is like a tree without roots”. “A Secret Lost in the Water”, by Roch Carrier, is a deep and insightful story that should be used to educate mankind. It delivers a strong admiration for nature, it teaches the reader to respect our elders, appreciate the wisdom and knowledge that is passed down to us, and it illustrates the significance of a relationship between father and son.

“A Secret Lost in the Water” by Roch Carrier. (2016, Mar 30). Retrieved from https://studymoose.com/a-secret-lost-in-the-water-by-roch-carrier-essay 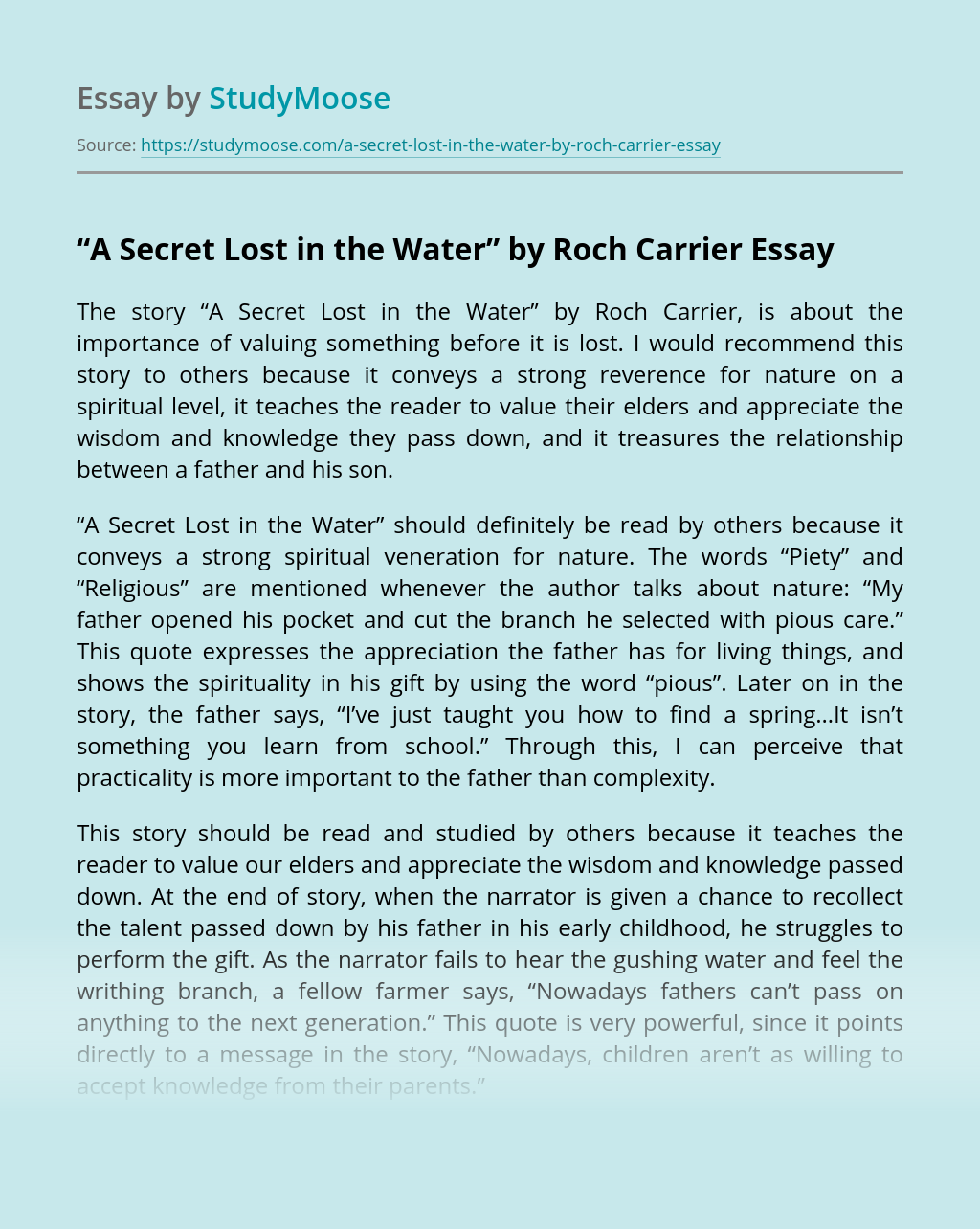 The parent child relationship in "Digging", "The Afflictions of Margaret" "On my first Sonne"

“Digging” by Seamus Heaney, reveals how the author looked up to his dad and grandpa. He sees his dad, who is now old, “straining” to dig “flowerbeds”, the poet remembers him in his prime, digging “potato drills”. Even previously, he remembers his grandfather, digging peat. He can not match “men like them” with a spade,...

Work With Children And Young People

Get Essay
Impacts of malnutrition on children

Capacio once said that one of the underlying reasons for establishing feeding program is to provide targeted families and their children, an incentive to attend school. It is popular strategy for achieving both educational and social objective among school children, which includes combating and fighting hunger and malnutrition. She further said that its potential impact...

One of the main issues people have with child beauty pageants is that the children’s childhood gets taken from them. Children shouldn’t be wearing fake tan, false eyelashes and make up. France is looking to ban beauty pageants for children under 16 and anyone who organises a pageant would face up to 2 years in...

Effects of Domestic Violence on Children

Domestic violence is a devastating social problem that impacts every segment of the population. While system responses are primarily targeted toward adult victims of abuse, increased attention is now being focused on the children who witness domestic violence. Studies estimate that 10 to 20 percent of children are at risk for exposure to domestic violence...