The Rugmaker of Mazar-E-Sharif Analysis

The novel ‘The Rugmaker of Mazar-e-Sharif’ is written by Najaf Mazari and Robert Hillman, illustrates the life and journey of an extraordinary human being. Najaf is drastically shaped by the ongoing war in his home country, Afghanistan but his willpower to still have hope, humility and faith no matter what obstacles came his way played a key factor in what makes Najaf a one of a kind individual. Najaf’s life has had its share of constant struggles and been put through extremely challenging situations that it would be easy to lose the traits a person possesses but for a man like Najaf, he remained strong and persevered which resulted to a safer and finer future with a triumphant business.

Throughout all the havoc the war was causing, Najaf never lost his true self nor the dreams and aspirations he was longing for to become reality.

From the very beginning, Najaf always displayed his hope. Even when all hope seems to have vanished, he finds it in him to never lose the one thing that carry’s him through.

Too many times when a human being such as Najaf may give up and surrender, he picks himself up and uses all the fibre in himself to not forfeit the life challenges he faces. In chapter 15 (The other side of the fence) of the book; Najaf and another inmate, Nemat are overjoyed that they were granted a Temporary Protection Visa only for it to be revoked as it was a mistake. When finally their Visas were truly granted, Najaf refuses to believe it.

‘’ … I have used up all the strength I have recovering from the last mistake.’’ (pg. 161) The quote indicates that somewhere deep down, Najaf was still hopeful for a better outcome and had not given up yet. The faith Najaf has in God is incredibly strong that in everything that happens, he always turns to God. From obstacle to obstacle, his faith in God and what God has planned for him only becomes deeper and more powerful. Afghanis are known for how religious and faithful they are, but it is not inevitable for some to question their beliefs and God but Najaf only always asked for God’s help and guidance. Through the whole journey of his life, he never once lost his Faith in God.

In chapter 22 (Journey) Najaf and other asylum seekers were on a dangerous, rusty boat that was unsuitable to be out at sea. ‘’I knew that we would need the help of God to survive for long on the open sea.’’ (pg. 233) During the long boat trip, All Najaf was thinking about was survival and God. His faith in God has never been stronger than ever as his fate was up to God. Najaf remains humble no matter how big his success becomes. From having just the necessities in Afghanistan and barely affording much else to slowly building a brighter, more stable future for his family and for himself, Najaf could have become arrogant and self-aggrandising but instead Najaf stayed humble and showed an act of humility by spreading his good fortune and founding the Mazar Development Fund which helps build schools to educate children and buy ambulances. In the postscript, Najaf is with his friends at a gathering but he doesn’t fail to remember those who were hard working and good people who deserved to be in his position just as much.

‘’I cannot forget the Afghans who have not met with good fortune, and I never will.’’ (Pg. 253) This shows how Najaf does not neglect to recall where he came from and those who were left behind in Afghanistan seeking for the exact same thing he fortunately got. In conclusion, the actions, thoughts and decisions Najaf makes only reveals what a genuinely good individual he is. From having hope, faith, being religious to never becoming conceited or supercilious but humble shows that traits like these make for a truly extraordinary man. 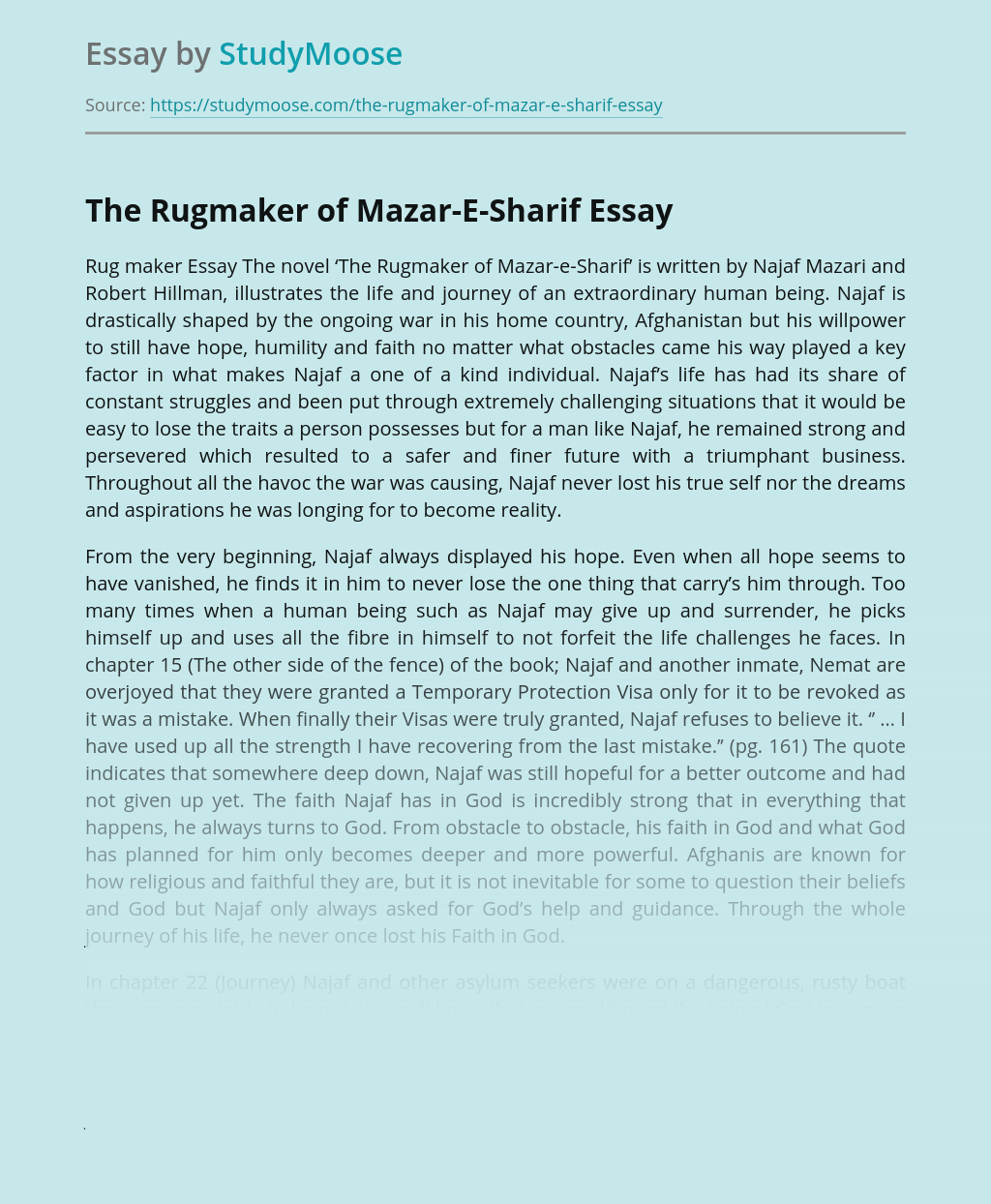 Don’t waste time
Get a verified writer to help you with The Rugmaker of Mazar-E-Sharif Analysis
Hire verified writer
$35.80 for a 2-page paper
Stay Safe, Stay Original