The role of religion in Beowulf

The epic poems Beowulf was first written in a pagan Saxon society, before Christianity was introduced. However, the poem was once again rewritten around the 18th centuries by a Christian poet. There is evidence of this throughout Beowulf as the author is in conflict when it comes to mix his Christian belief with the pagan society of Beowulf. When I look at the text, I see two different element of religion mixed together as one. As a result, this leads to frequent biblical allusion and references to God, Cain, heaven, hell and “creator”.

Turn in your highest-quality paper
Get a qualified writer to help you with
“ The role of religion in Beowulf ”
Get high-quality paper
NEW! AI matching with writer

In Beowulf, the author has combined the warrior fighting society of Anglo-Saxon with the belief of faith of Christianity and skillfully woven them in this epic poem and in the end, both religion functions alongside with each other to produce this great work of literature.

Around the time of 18th century, this poem was rewritten by a Christian poet. Not surprising since that time, most people cannot read or write and those who can belong to the church.

The author uses both Christian and pagan elements to define the character of Beowulf as a champion send by the “god” to get rid of the evil in the world. We can first see the Christian influence when the author mention Grendel as a beast out of hell and whose clan is Cain that had been outlawed by the Creator. The reference to hell, Cain and the creator is then linked with the violence culture of Angelo-Saxon. Other appearance of Christianity mixing with pagan traditions is when Grendel attacks Herot and it’s people think it was a punishment sent by the god (Christian belief) and offers idols, blood sacrifice of goat, make vow to the their stone god in hope to drive this demon off (pagan belief) “sometimes at pagan shrines they vowed offerings to idols, swore oaths that the killer of souls.

I also think in some way, Beowulf is like a Pagan allegory of Jesus Christ. When the story first begin, the narrator tells of a boy-child send form the god, “Afterward a boy-child was born to Shield… a comfort send by God to that nation” (line 12-14). Further links can be made in the fact that Beowulf’s name is a symbol for fish “My mother makes sounds…Beware the fish” (149) and in many times in the poem and novel, his name is a reference to the Sea (His arrival from the sea, the race with Breca, his fight with Grendel’s mother under water…etc). This is similar to when Jesus first
surprise people by walking on water and perform miracles such as catching low amount of fish to feed people. Further similarity can be made in the fact that both are willing to die for the people they love and to defend the world against evil.

Beowulf has it beginning in a pagan civilization but was written down when almost all the known population was Christian. As a result of this, the author is at pain trying mix the two religions, which then leads to many references of god, hell, Cain and other allusions to Jesus Christ. Both beliefs are however, are skillfully written and intertwined and in the end created this great masterpiece.

The role of religion in Beowulf. (2016, Aug 02). Retrieved from https://studymoose.com/the-role-of-religion-in-beowulf-essay 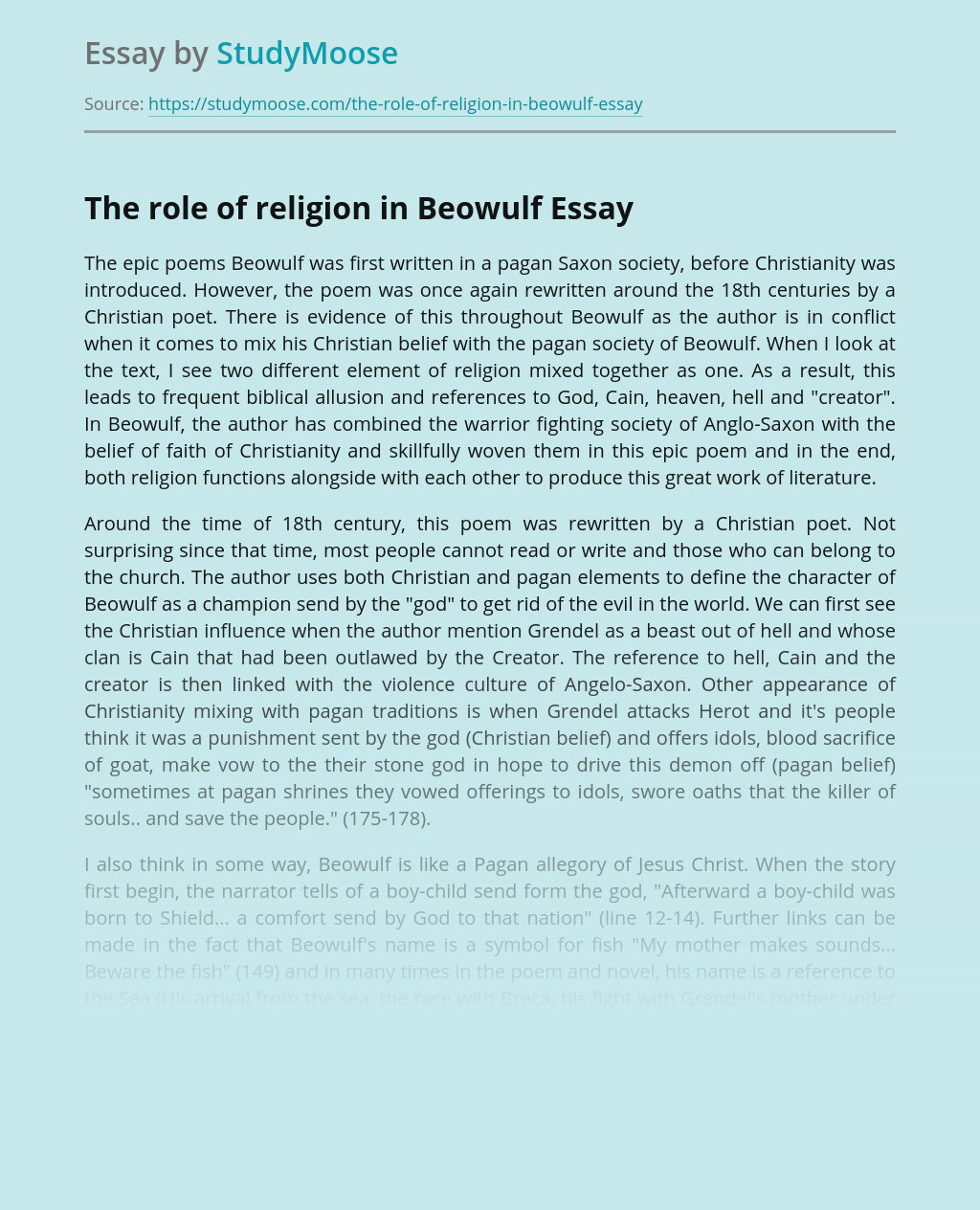 Turn in your highest-quality paper
Get a qualified writer to help you with
“ The role of religion in Beowulf ”
Get high-quality paper
Helping students since 2015
Stay Safe, Stay Original