The Role of Narcissism in 'Dorian Gray'

Dorian goes from innoncent, pure, almost christ-like man without sin to a filthy, disgusting sinner who exploits everyone. The original sin pride, which usually is said to be the source of all other sins, gives birth to this new man. In this essay I will discuss how this sin leads to other sins; wrath, lust…. and how these sins affect Dorian as a person, into becoming the terrible one in the end of the novel.

Narcissism is a generalized personality trait characterized by egotism, vanity, pride, or selfishness.

Turn in your highest-quality paper
Get a qualified writer to help you with
“ The Role of Narcissism in ‘Dorian Gray’ ”
Get high-quality paper
NEW! AI matching with writer

The psychological state could be described as an pursuit of perfection. This quest is however a central theme in the novel where art stands for perfection and life for imperfection. Dorian Gray was in the beginning of the book a noble gentleman, a wealthy youth archetype of beauty and innocence. However, this changes when he sees the portrait that Hollward painted for him the first time.

“The sense of his own beauty came on him like a revelation.

He had never felt it before. “

As earlier mentioned, the original sin pride is usually said to be the source of all other sins. Dorian’s consciousness is first filled with admiration for himself, and his unnatural beauty. This could be seen as a turning point in the novel, from being the innocent and pure man he gets possessed by himself. The portrait of him developed a vanity and with that – he commits the first sin.

Next feeling that is crossing his mind is jealousy, and just like pride, that is one other of the seven death sins.

Could it possibly be so that Oscar Wilde had the sins in mind while he was writing the book? Since the story takes place during the1800th century it may actually be so. Wilde was himself a christian and strongly believed in god. Based on this we can connect Dorian with Jesus, a symbol for goodness.

It is aloud to commit sins from a Christian point of view as long as you are asking for forgiveness. Actions get consequences and there is a point in
facing them. Dorian never has to face any consequences of his actions since the portrait is carrying them. He turns into a pleasure seeker with one big mission, to find temporary satisfaction. I believe that Wilde wanted to enlighten the fact that you can’t be satisfied all the time. What would the meaning of the word satisfaction be, if you were always satisfied?

The foundation for all the evil things that Dorian did is based in his narcissism. There were no other people of importance in his life except from himself; he was filled with egoism just like a narcist. Dorian was an example of perfection from all perspective til his own vanity caught him. His obsession for finding pleasure turned him into do ghasky things. A perfect man who sinned and become obnoxious.

In conclusion, the whole book could be seen as a metaphor for an angel who fell from the sky and turned into Satan. Lucifer. The angel would symbolise Dorian before he became a narcissist, and the fall from sky would symbolise all the horrible things he did on the way. Lucifer or Satan could be linked to the death of Dorian. His death could also be seen as a reunion with his soul who is completely rotten.

What moral can we find in the story? What is the message that Wilde wanted to give us? I don’t know, but the book has awakened many thoughts. The only sin that is unforgettable is denying god, and this is exactly what Dorian does.

The Role of Narcissism in 'Dorian Gray'. (2016, May 01). Retrieved from https://studymoose.com/the-role-of-narcissism-in-dorian-gray-essay 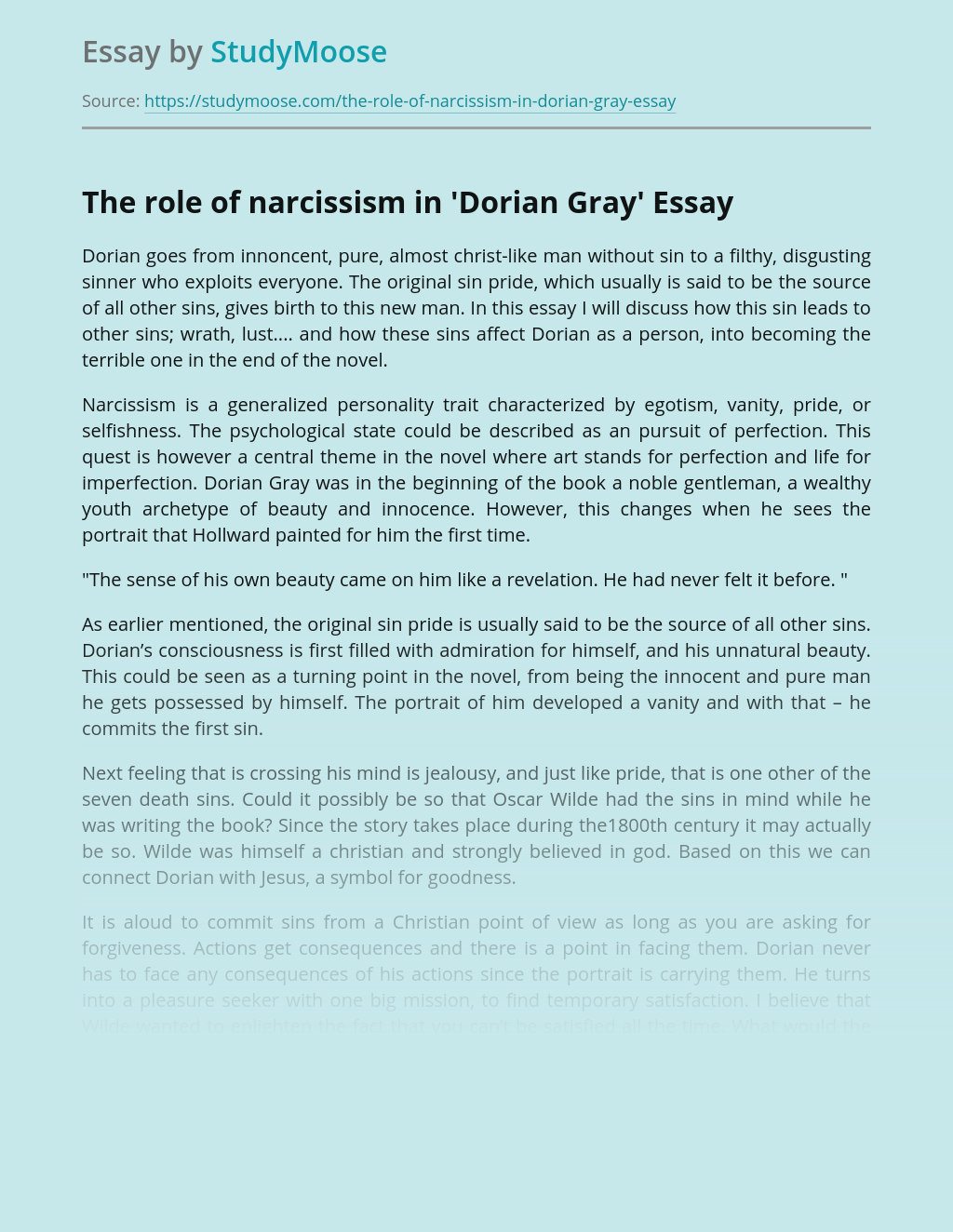 Turn in your highest-quality paper
Get a qualified writer to help you with
“ The Role of Narcissism in ‘Dorian Gray’ ”
Get high-quality paper
Helping students since 2015
Stay Safe, Stay Original