The Rise and Fall of the Ottoman Safavid and Mughal Empires

The Ottoman, Safavid, and Mughal Empires were forces to be reckoned with back in the day. Being powerful entities, their rise was paved with military prowess, religious tolerance, and having meritocratic systems, though this is not always the case. Their fall, however, was the result of their treatment of peasants, a plague of horrid rulers, and shortsighted economic handling.

The Ottomans were blessed for forty-six years with one of the greatest rulers of the thirteenth century – Suleiman the Magnificent. Suleiman brought the Ottoman Empire into a Golden Age, where architecture, literature, art, theology, and philosophy flourished.

Don't use plagiarized sources. Get your custom essay on
“ The Rise and Fall of the Ottoman Safavid and Mughal Empires ”
Get custom paper
NEW! smart matching with writer

Being one of the few empires in the 1500’s to have a meritocratic system, everyone in Suleiman’s court was prudently and cautiously chosen by the Sultan himself, proving that this is why “they are successful in their undertakings.” (Doc. 3) Part of the reason why the Ottomans were so successful in persisting for 624 years is for their religious tolerance. Although those of any faith other than Islam had to pay a special tax for the sole purpose of practicing their customs, the Ottomans were very lax on religion.

Their religious tolerance was adapted into the Safavid and Mughal empires, where it was, like anything else in life, attacked by people against such an idea as acceptance of different peoples, such as that of Abd al-Qadir Bada’uni’s writings that show how frightened he is at the prospect of Akbar the Great’s potential conversion. (Doc. 4)

How in most places the peasantry is of no importance, Sari Mehmed Pasha stated how important it was to keep the peasants content, that it is in the empire’s best interest to protect and preserve them – even those lives of the travelers.

(Doc. 8) The Pasha might have stated this seeing as how this was written in the 18th century, an era of decline for the Ottomans, so this might have been written in part of showing what a good job the legal system is doing for the rabble. As we’re entering the Ottoman’s decline, one reason for why they fell would have been how they were trading and with whom.

It seems that, according to William Eton, the Ottomans would not trade with “beggarly nations,” seeing as how they wanted to trade riches for hardly anything, opting to trade with “those who bring … useful and valuable articles.” (Doc. 6) The reluctance of trading with lesser nations would have contributed to the fall of the Ottomans. An additional document to find out more about why the Ottomans fell would have been a document released shortly after Suleiman the Magnificent died, seeing as the empire began to fall apart coincidentally when he deceased.

The Safavids were known mostly for their military prowess, their manner of taking lands. One such example was a letter by Father Paul Simon to Pope Clement VIII, which talked about how mighty the army of Abbas the Great is, comparing them to their men in Europe as being “little behind our men [in Europe.]” This letter could have served as a warning so as not to mess with the Safavid army. (Doc. 1) As stated before, the Safavid empire exercised religious tolerance, which was an idea taken from the Ottomans, but it wasn’t to the extent of the Ottomans. (Doc. 4)

Sir John Malcolm warns of the rulership of the Safavids, specifically in the mid-1600s, and how growing in a harem had warped the young monarch for the worse – he would grow up to be “effeminate and inefficient,” his consumption of wine was the “cause of all the evils of his reign.” (Doc. 7) But apparently, when he was drunk, he favored his subjects far more than his officers. Another useful document could be one talking about the leniency of people who were not Shi’ite Muslims.

The Mughals were a rich and powerful empire, with much money to spare. How rich were they that they could spend so much on their military, and especially on their nobility. This usage of money could have been strength of theirs for it could have shown how easily they can buy advanced weapons, better armour, stronger and faster horses. (Doc. 2) Let’s now go back to Abd al-Qadir Bada’uni, the Orthodox Muslim cleric who was against religious policies of Akbar the Great, the Mughal Emperor. Al-Qadir described religious figures from different religions as telling the emperor “obscenities and follies.” This mistrust might have only been his, which could have stemmed from the knowledge of past leaders converting, making a
chain reaction that resulted in most of the population converting to that same religion.

Regardless of this man’s panicking reaction, this shows that Akbar was religiously tolerant, with al-Qadir as an outlier. As seen before, being tolerant favors the leader and the empire in the long run. Sadly, all good things must come to an end, and such happened to the Mughals: the king would give land to military men, and whoever lived on that land and in the villages and towns within it were under their control. The peasants who were under control of soldiers, governors, or farmers started questioning why would they have to work the land if it would just be taken away soon? To which the soldiers, governors, and farmers responded with why should it bother them that they’re not working it, why should they waste their money and time to make it fruitful? (Doc. 5) An extra document useful to this essay would have been a document speaking about how the Mughal Empire was helping its people, which could have shown how the odds were in its favor if it was to cease to exist early on or not.

The three gunpowder empires were at the peak of their prime in the 16th and 17th centuries, but they ultimately disintegrated by 1800. This document goes to show what were some of the factors of the rise of these empires, and what were causes for their collapse. Big factors in play here were the use of religion to favor the people, how mighty was their army, and how they treated the common people.

The Rise and Fall of the Ottoman Safavid and Mughal Empires. (2016, Sep 11). Retrieved from https://studymoose.com/the-rise-and-fall-of-the-ottoman-safavid-and-mughal-empires-essay 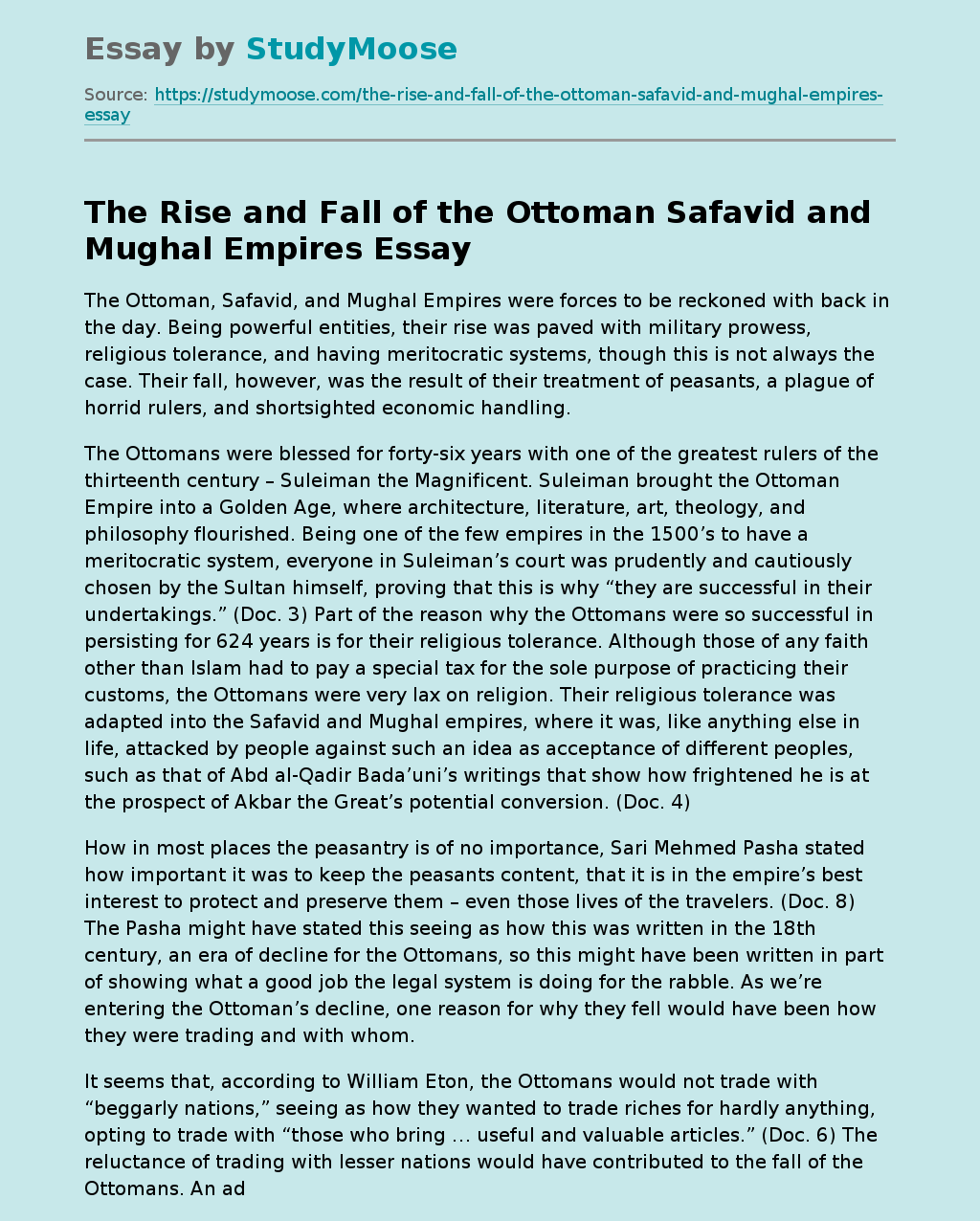