The Pros and Cons of Inmate Work Programs

Historically, inmate labor started not for the purpose of giving revenues to the inmates or rehabilitating them to become better members of the society or preventing prison riot. On the contrary, it started out as a revenue-generating measure for states to pay for the costs of maintaining jails and prisons. (Rob Atkinson & Knut Rostad, 2003, p. 2) During the 1800s inmates used to work for private companies inside jails and prisons without pay. For example, when the employees of Tennessee Coal Companies in 1891 engaged in strike, they were used as replacements for these employees.

Turn in your highest-quality paper
Get a qualified writer to help you with
“ The Pros and Cons of Inmate Work Programs ”
Get high-quality paper
NEW! AI matching with writer

But over time, this was abused by some prison officials resulting in its discontinuation. Subsequently in 1979, Congress passed the Justice System Improvement Act which established the Prison Industry Enhancement Certification Program. It provided for the revival of inmate work programs that gave inmates in jails and prisons work opportunities. Now, inmate labor has been a part of programs in most jails and prisons. Arguments in favor of Inmate Labor Inmate work programs benefit not only the employees but the state and the correctional institution.

Firstly, one of the advantages of inmate work programs in correctional setting is that it helps prevent violence inside correctional facilities. It must be stressed that prison administrators consider that there is a strong relationship between prison disturbances and riots and the lack of employment programs. It is generally acknowledged that inmates who are part of work programs are less likely to have misconduct reports and are more likely to possess a higher level of responsibility.

Another advantage is that employees are given the opportunity even while inside these institutions to earn enough money that may help the inmates and their family who are dependent to them for support. It bears stressing that when the head of the family is inside the prison, only one parent is left to attend to the needs of the family. With this program, the head of the family can still support his family. In addition, work programs preoccupy the inmates which reduce the tension among them.

The most important is that it provides the inmates with skills and enough work ethics that they can use once they are finally released. It is no secret that the public subsidizes the cost and maintenance of jails and institutions all over the country with their own taxes. With the Inmate Work Program, a portion of the earnings of the prisoners is utilized to pay for whatever is necessary for maintenance of these institutions. It also saves the government because the inmates get reduced sentences for participating in this program. (“Inmate Work Program Reaps Award”, 2002 p.

1) As a result, the public’s money can be channeled to other government programs such as funding for orphaned children, or the sick, or as calamity fund for victims of natural disasters. Arguments against Inmate Labor Some people however are against the idea of inmates receiving work while inside the prisons. The issue against employment program for inmates is based on the idea that jails and institutions serve to punish inmates. It is the society’s retribution for the crime the inmate has committed. Thus, granting inmates the opportunity to work is therefore inconsistent with this purpose and puts the society at risk.

(Robert Preer, 1994, p. 1) Another argument against Inmate labor is that though may be good for the rehabilitation of inmates is actually disastrous for businesses outside of prisons. For them, the higher is the demand for inmates to do work for private companies, the less is the demand for employees outside prisons. When prisoners are hired to do work, this means that work is transferred from those outside of prisons to those inmates without any positive effect for the society. It bears stressing that employees outside prison cannot compete in terms of labor costs against those in prison.

When more inmates are recruited then more people will be displaced from work. (“Protecting Jobs, 2001, p. 1) Indeed, it is unfair if employees will be forced compete with inmates who are wiling to accept lowest wage for their services. Conclusion The Inmate Work Program has its benefits but it also has its disadvantages. One thing is clear though. Inmates also deserve a second chance. Giving the inmates opportunity to work in jails helps them become responsible citizens of our society. Private companies however should not be allowed to take advantage of the cheap labor they give.

There must be restrictions in allowing private companies to work with correctional institutions.

The Pros and Cons of Inmate Work Programs. (2017, Apr 27). Retrieved from https://studymoose.com/the-pros-and-cons-of-inmate-work-programs-essay 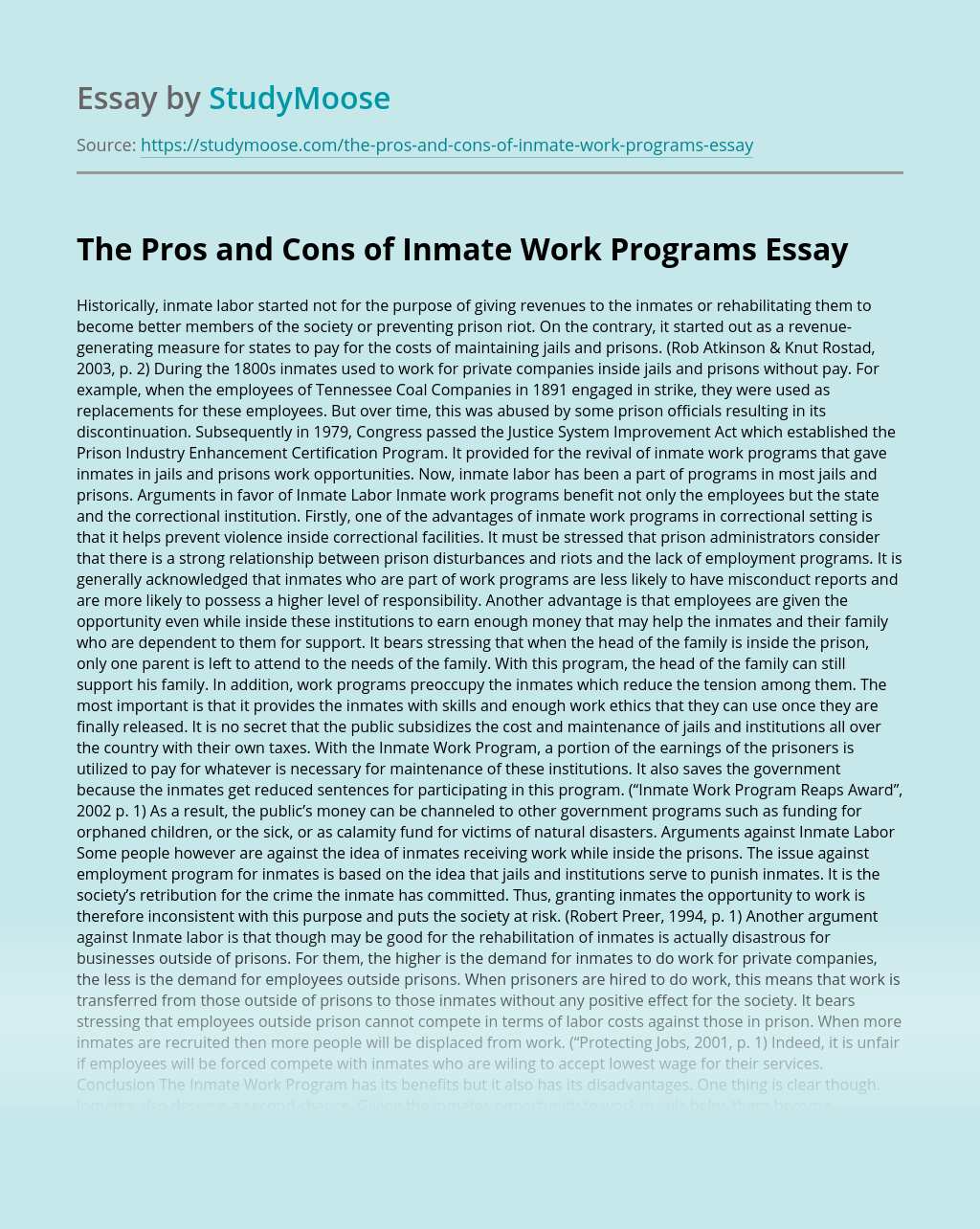 Turn in your highest-quality paper
Get a qualified writer to help you with
“ The Pros and Cons of Inmate Work Programs ”
Get high-quality paper
Helping students since 2015
Stay Safe, Stay Original