Late 19th century America was a time of both prosperity and poverty. Although it is often remembered by the luxurious lives of those like the Rockefellers and Carnagies, the majority of the population was a struggling working class. Entire families worked for 10 hours a day, 7 days a week in dangerous, unsanitary factories just to have enough money for dinner and the issue of upgrading these working conditions quickly came to the forefront of American reforms. The movement towards organized labor from 1875-1900 was unsuccessful in improving the position of workers because of the initial failure of strikes, the inherent feeling of superiority of employers over employees and the lack of governmental support.

Don't use plagiarized sources. Get your custom essay on
“ The position of workers in the period form 1875 to 1900 ”
Get custom paper
NEW! smart matching with writer

Since there was no groundwork to rationalize and show examples of the success of organized labor, it was nearly impossible to make it work at this time. If unions were going to work, striking would have to be effective and clearly, they weren’t. In the 1860’s, the National Labor Union was formed to unify workers in fighting for higher wages, an 8 hour work day and various social causes and it set the stage for many failing unions to come.

In 1877, railroad workers in this union from across the country took part in an enormous strike that resulted in mass violence and very few reforms. Afterwards, a editorial in The New York Times stated: “the strike is apparently hopeless, and must be regarded as nothing more than a rash and spiteful demonstration of resentment by men too ignorant or too reckless to understand their own interests” (Document B).

This editorial, which was clearly in favor of labor reforms, was acknowledging that this method of fighting was not going to work for the laborers at this time. A failure of this magnitude so early on in the movement should have been enough to put it to halt, however, year after year, strikes were breaking and little was being done in the workers favors. In 1892, workers at the Homestead Steel Plant near Pittsburg walked out on strike and mass chaos the lives of at least two Pinkerton detectives and one civilian, among many other laborers deaths (Document G). The violent acts at Homestead not only failed to gain rights but since non-strikers were killed it led people to think of laborers in a negative light. After all these strikes were defeated it was clear that organized labor was not successful and was not the right way to improve conditions for workers.

The industrial era gave more power to employers than ever before. Almost all Americans had the attitude that employers were on a higher level than employees in every way and even the idea that many workers need to ban together to equal one employer demonstrated inferiority. In 1883, in a testimony before the Senate Committee on Labor and Capital, a machinist said that “100 men are able to do now what it took 300 or 400 men to do fifteen years ago” in trying to explain his insignificance to the company he worked for (Document D). Since this was such an accepted way of thinking, even when laborers banned together to explain their point of view and the hardships that they face to say, the Senate, there was no sympathy and so nothing got done.

In addition, at the same time, these very workers who were essentially arguing that they were “just a number” were proving their own point by giving in and signing things like the Western Union Telegraph Company’s employee contract that forbid them from joining unions (Document E). The ineffectiveness of unions is shown in that the unions they did form weren’t strong enough to even achieve success in the first step of changing the publics attitudes towards the workers positions.

Most importantly, the failure of organized labor can be attributed to the negligence of the United States government in helping out workers. If the attitude of Americans was ever going to be changed, the government needed to take a roll in advocating free will and enforcing the importance of the laborers in society. Since the government didn’t support unions, they unions were demonized into “anti-American”, “anti-capitalist” groups of people. Even Thomas Nast, a man who was certainly concerned with improving working conditions, illustrated the notion that laborers were destroying capitalism and moving towards communism (Document C). This feeling, shown in Nast’s illustration after the railroad strikes of 1877, that unions simply lead to more “communistic values” and general uniformity made it very difficult to actually get anything done.

Samuel Gompers, the founder of the American Federation of Labor (in 1886), argued before a commission established by the House of Representatives on the Relations and Conditions of Capital and Labor in 1899, that the right to strike was absolutely necessary if any reforms were going to be made and not even this right had been officially granted to the people by the government (Document I). In stating this, Gompers was making it clear that not even the very basis of organized labor had been established and so up until this point the advances that had been made, were virtually insignificant. The fact that the government had not addressed this issue and hadn’t clearly stated that unions were permitted and that they had the right to strike seriously hindered the success of labor reforms.

In conclusion, from 1875-1900 very few advances were made through organized labor in achieving better working conditions for workers. A series of failed strikes, the American attitude of worker inferiority and the governments passive role all contributed to this movements lack of success. This period of time was simply an era of industrialism and it’s roots were founded in advancing, not regressing. The high powered people of the time were moving forward too quickly and eventually, this phase did end. Eventually as the government began to take a role, organized labor gained power and respect and did accomplish many of its goals. 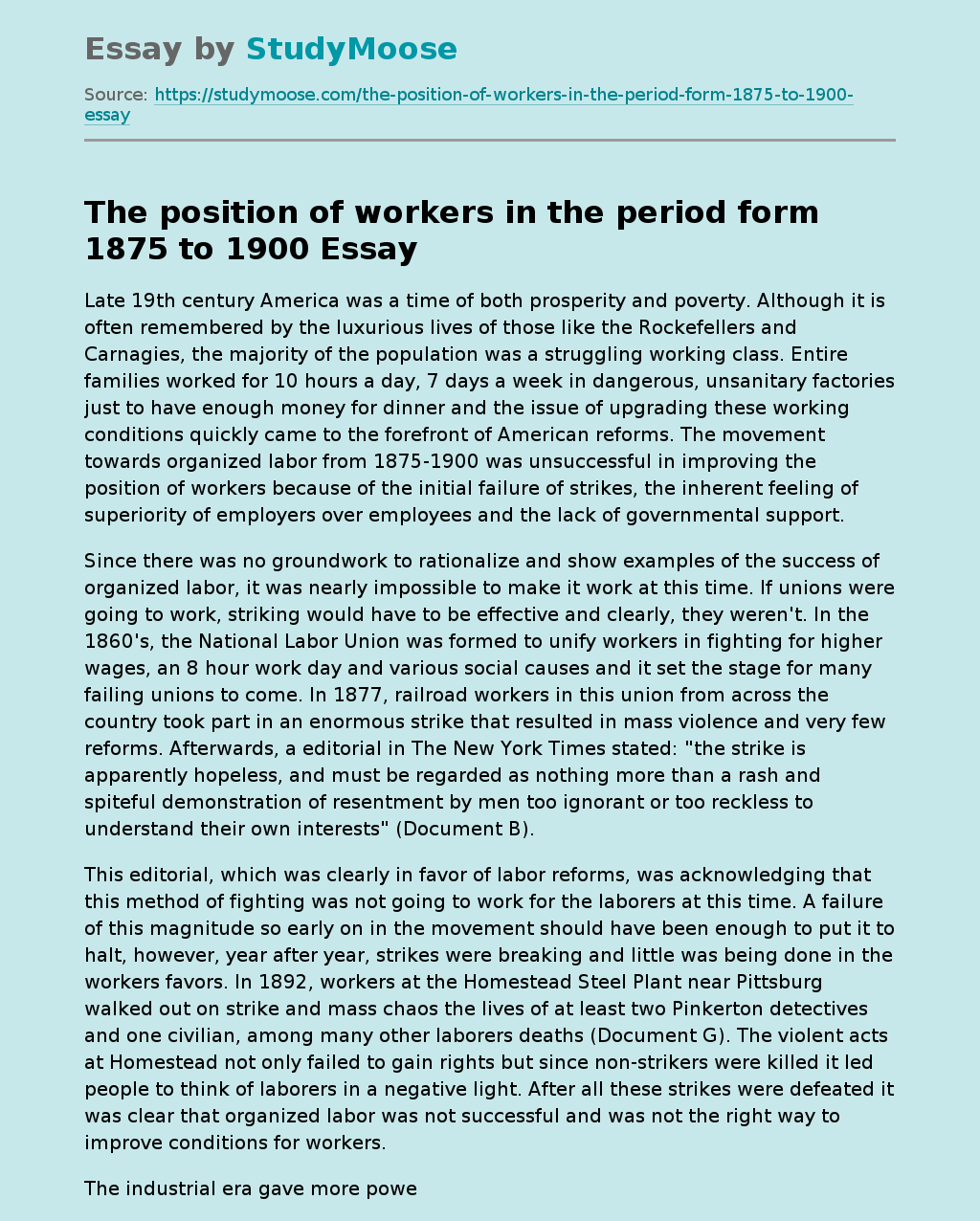