The popularity of the basketball shoe, The Air Jordan, was the result of a successful campaign. Basketball Michael Jordan is a legend. Jordan was a great role model and an even greater athlete. In 1984, the year that Jordan signed the game changing endorsement deal with Nike, Nike was struggling to compete in the shoe industry losing steam from their engine from their angle in the running division, they sorely needed to reinvent themselves and saw some promise in Jordan as of means of allowing that to occur (soleredemption, 2006).

Don't use plagiarized sources. Get your custom essay on
“ The popularity of the basketball shoe The Air Jordan was the result ”
Get custom paper
NEW! smart matching with writer

While Michael Jordan was more interested in aligning with Converse or Adidas the timing wasn’t right; Jordan’s agent saw the promise in Nike’s offer seeing that it was an opportunity for an entire shoe to be based around his client (soleredemption, 2006). One could also agree that the shoe immediately gained a great advantage and also had fantastic quality, something that Nike was not so pleased with. The Shoes were quickly banned by the NBA, but Jordan wore them to every game, being fined up to $5000 dollars a game; Nike was more than happy to pay these fines (soleredemption, 2006).

Nike was clever enough to use this banning of these shoes as another means of boosting the marketing scheme. One commercial was created as a response to the NBA’s uniform of unity’ clause when commissioner David stern banned the original red and black Technicolor Nike Air Jordan shoes. But the NBA can’t stop you from buying these shoes. Air Jordan.

Basketball By Nike. (Johnston 2001 p.154). This commercial demonstrates how Nike wasn’t afraid to market Jordans sneakers as slightly renegade, different and distinctive , as unique and somewhat awesome as the athlete endorsing them. Air Jordan I was the first Nike sneakers for Jordan. The Air Jordan I was designed by Peter Moore (“”Air Jordan.” 10 Mar 2016). The shoe was first released in 1985 in a red and black color way to match the uniform of the Chicago bull, the team which Jordan played for. These sneakers were later outlawed for not having any white on them. The success of Jordan’s first sneaker encouraged Nike to release the Air Jordan 2 in 1986 for the upcoming basketball season. Designed by Peter Moore and Bruce Kilgore, the original shoe was different and that it was made in Italy giving the shoe a luxury feel “”(Air Jordan.”, 10 Mar 2016, ). The Air Jordan 2 originally retailed at $64.99. The next Air Jordan is the Air Jordan III designed by Tinker Hatfield. By that time Jordan was ready to leave Nike, but this shoe changed his mind. It was the Air Jordan to feature a visible air unit on the heel, the new Jumpman logo, an elephant print trim and tumble leather to give it a luxury look( “”Air Jordan.”10 Mar 2016,). The shoe was also famous for the humorous ads depicting Spike Lee as Mars Blackmon, the character he played in his film She’s gotta have it'(“”Air Jordan.”10 Mar 2016). This was also known as the Mars and Mike ad campaign, which was one of Nike’s most successful advertising campaigns (“”Air Jordan.”10 Mar 2016). The Jordan IV was released in to the public in 1989, designed by Tinker Hatfield. It was the first Jordan shoe released directly on the global market (“”Air Jordan.”10 Mar 2016). Spike Lee helped in the ads for the Jordan IV. Spike Lee featured the Air Jordan IV in his movie Do The Right Thing (“”Air Jordan.”10 Mar 2016). The Bordeaux Spiz’ike Iv were made for Spike Lee in order to pay respects for his advertisement for the Cement 4’s. The Jordan V was released on February 1990, designed by Hatfield again (sneakernews ). Some elements of the shoe were carried over from the Air Jordan IV but overall it was a completely new design. Some of the new features were the 3M or reflective tongue, translucent rubber soles or as sneakerheads call them icy bottoms’ and lace locks for the shoelaces. Hatfield is believed to have drawn inspiration for the Air Jordan V from World War II fighter planes, which was most notably visible in the shark teeth shapes on the midsole (“”Air Jordan.”10 Mar 2016). The original versions featured Nike Air on the back of the shoe, but the remastered versions have the jumpman logo. The AJ5 was part of the first Remastered releases that debuted in late 2014/early 2015. The latest Remastered Black/Metallic colorway releases with original Nike Air branding on July 23rd, 2016 for $220 (sneakernews ). The next Air Jordan was the Jordan VI had a new design and was released by Hatfield in 1991. What makes the Air Jordan VI so remarkable? Could it be that the AJ 6 was worn during MJ’s first NBA title? Or could it be he won his first NBA Finals MVP? Maybe it is the material, or design of the Air Jordan VI. Which ever it may be, this is one shoe to remember (sneakerfiles). Jordan gave direct orders for this shoe to have a clean reinforced toe box, so that is exactly what Hatfield did. Jordan had a big problem putting these on the past five models, so Tinker designed two holes on the top of the tongue, and one loop on the back, calling it a spoiler (sneakerfiles). The Air Jordan 6 was the second model to have the icy sole. Jordan wanted the heel tab positioned so it did not hit his Achilles tendon, making the Jordan 6 the first shoe to have any sort of molded structure on the back. The last touch Tinker gave was incorporated the number 23 on the design of the shoe (sneakerfiles). When the shoe was first released in 1991 the retail price was $125.00 and five colors were released. The Air Jordan 7 originally released in 1992 and was once again released by Hatfield and were specially made for the Barcelona Olympics. This sneaker introduced the huarache technology which gave the user’s a better fit around their foot. A few things were no longer featured on the new shoe such as the visible air sole, the Nike Air logo, and the yellowing soles (“Air Jordan. 10 Mar 2016). This was the first Air Jordan sneaker to not show any disctivntive Nike Air logo anywhere on the shoe. When Jordan went to the Olympic in 1992, Nike released a special olympic color which had the number nine on the back of them. That being Jordans olympic jersey number.

The popularity of the basketball shoe The Air Jordan was the result. (2019, Aug 20). Retrieved from https://studymoose.com/the-popularity-of-the-basketball-shoe-the-air-jordan-was-the-result-essay 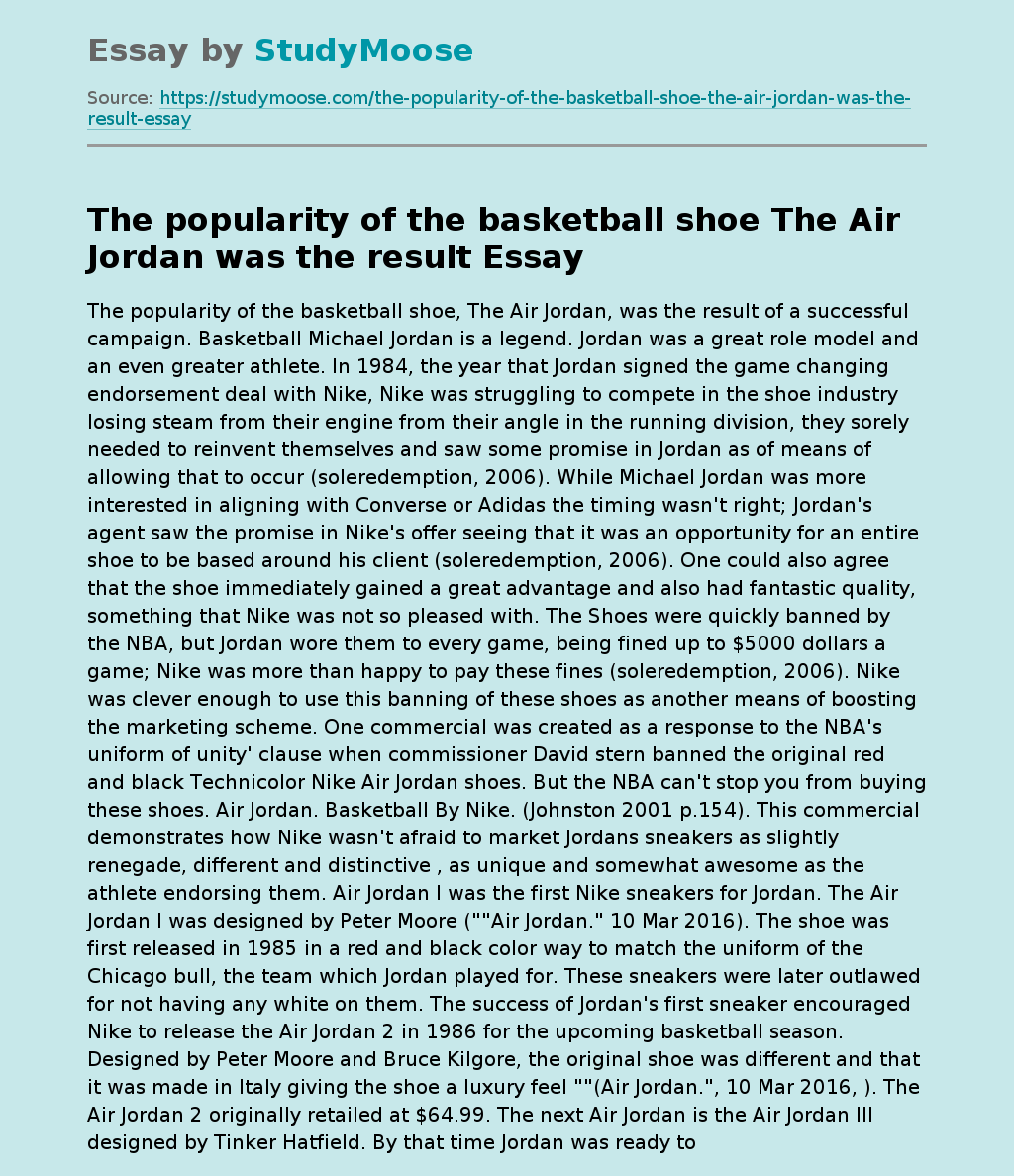