The Clean Air Act is one of the laws that serve’s under the Environmental protection Agency (EPA), to protect the environment and public health. The Clean Air Act of 1970 and amended in 1990 is a United States federal law intended to reduce air pollution and protect air quality. It sets standards for air quality that limits the amount of various pollutants to specified levels. It also sets deadlines for governments and industries to meet the standards. The EPA is responsible for establishing standards and enforcing the Clean Air Act and to set limits on emissions of air pollutants coming from sources like chemical plants, utilities, and steel mills, which limits how much can be in the air anywhere in the United States.

Don't use plagiarized sources. Get your custom essay on
“ Law Against Air Pollution The Clean Air Act ”
Get custom paper
NEW! smart matching with writer

Setting limits on how much pollutant can be in the air ensures basic health and environmental protection from air pollution for all Americans.

Section 112 requires that EPA establish emission standards that require the maximum degree of reduction in emissions of hazardous air pollutants. After 8 years, the technology-based standards are issued for a source category and EPA is required to review those standards to determine whether any residual risk exists for that source category and if necessary, revise the standards to address suck risk. In the 1990 the amended Clean Air Act, section 112 was revised to require issuance of technology based standards for major sources and certain area sources. (EPA Gov, 2013)

It sells vehicles worldwide such as their Chrysler brand, Dodge, Jeep and Ram brands. The oil crisis of 1973 impacted Chrysler’s sales to the point of bankruptcy. By the 1980s Chrysler started gaining profitability, due to former CEO Lee Iacocca. Chrysler was hit by the automotive industry crisis of 2008-2010, which received billions of dollars in loans from the United States government.

Chrysler’s objective for the global environment is to minimize the impact the products and processes have on the global environment and to positively affect the people and communities. “The path of sustainability is a core part of an ongoing cultural transformation at Chrysler Group that seeks to meet the business demands of today without compromising the capacity of future generations to meet their needs. The values of sustainability guide our decisions and actions as we strive to build a more secure future for our employees, customers, suppliers, dealers and society as a whole.” (Marchionne) Chrysler and Fiat have merged the two companies, which is pursuing an enhanced long-term product strategy. Their results are greater fuel efficiency and reduced emissions, while achieving the economies of scale necessary for long-term viability.

Why did the law come about

Clean Air Act came about because of what is known as the London’s Killer Fog. In October 1948 in Donora Pennsylvania a cloud of air pollution was formed and lingered for five days In October 1948, a thick cloud of air pollution formed above the industrial town of Donora, Pennsylvania. The cloud which lingered for five days, killed 20 people and caused sickness in 6,000 of the town’s 14,000 people. In 1952, over 3,000 people died in what became known as London’s “Killer Fog.” The smog was so thick that buses could not run without guides walking ahead of them carrying lanterns. Events like these alerted us to the dangers that air pollution poses to public health. Several federal and state laws were passed, including the original Clean Air Act of 1963, which established funding for the study and the cleanup of air pollution.

But there was no comprehensive federal response to address air pollution until Congress passed a much stronger Clean Air Act in 1970. That same year Congress created the EPA and gave it the primary role in carrying out the law. Since 1970, EPA has been responsible for a variety of Clean Air Act programs to reduce air pollution nationwide. In 1990, Congress dramatically revised and expanded the Clean Air Act, providing EPA even broader authority to implement and enforce regulations reducing air pollutant emissions. The 1990 Amendments also placed an increased emphasis on more cost-effective approaches to reduce air pollution. How the law has impacted your corporation?

The Clean Air Act, originally enacted in 1970, has been around long enough to allow for heavy-duty number crunching. By sharply reducing pollution from cars, factory smokestacks, and power plants, the law has saved thousands of lives a year and reduced the prevalence of asthma, emphysema, and heart disease, according to a pair of congressionally mandated EPA cost-benefit studies issued in October 1997 and this past March. The gains are not free; the EPA estimates that in 2010 compliance with the Clean Air Act required industry expenditures of $53 billion. Monetizing the corresponding benefits—things like extending life spans and avoiding hospital stays and sick days from work—produces a figure of $1.3 trillion.

By the government’s measure, therefore, the act’s benefits exceed its costs by a factor of 25 to 1. “The economic case is pretty convincing,” says William K. Reilly, a senior adviser to the private equity firm TPG Capital. Reilly, a Republican who headed the EPA during the George H.W. Bush Administration and co-chaired President Barack Obama’s commission on the 2010 Gulf of Mexico oil spill, points out an additional byproduct of the Clean Air Act: the growth of the environmental technology industry. Cleantech, comprised mostly of small businesses, generated $282 billion in revenue and supported 1.6 million American jobs in 2007, according to the EPA. Environmentalism is not pain-free, nor are the politics around it simple. In mid-May, a labor union that normally backs the Obama Administration announced that it would join with industry giant American Electric Power (AEP) to lobby Congress to delay the EPA’s planned imposition later this year of stringent new rules restricting emissions of mercury, lead, arsenic, and acid gases by coal-fired power plants.

The facilities that would be affected emit some 386,000 tons of toxic air pollution a year. That makes them the country’s largest industrial source of such contamination. Exposure to these pollutants can cause birth defects, as well as lung and heart illnesses. Edwin D. Hill, president of the 725,000-member International Brotherhood of Electrical Workers, appreciates the hazards, but said in a May 16 statement that unless utilities were given an extra five or six years to modernize or close their oldest coal plants, about 50,000 workers in power, mining, and railroads would lose their jobs. The EPA concedes that its forthcoming mercury and air toxins rule (which the agency is under court order to issue) would cost industry nearly $11 billion a year in estimated compliance expenditures. Utilities, unsurprisingly, warn that the cost figure would be much higher.

On the other side of the ledger, the EPA has estimated that the monetized value of health benefits from reduced mercury and other air toxins would far exceed expenditures. All of which brings us back to Chicago’s Fisk and Crawford power stations. Aggressive EPA action—on either greenhouse gases or mercury and more terrestrial pollutants—would present owner Midwest Generation with a dilemma: Are the antiquated plants worth expensive upgrades, as opposed to just shutting them down? The facilities directly employ a total of 200 people. “We think we are well-positioned to comply with what the EPA is prepared to do on mercury,” says McFarlan, the company spokesman. Beyond that, however, Midwest Generation has “not made final capital investment decisions.” Those jobs, in other words, could be in jeopardy.

“The employment question is real,” says the NRDC’s Henderson. “The question is whether we want to preserve ancient plants that are making people sick—and costing us money for hospital stays—or we want to get to work on training workers for the jobs of the future in cleaner energy production and renewables.” That suggests an alternative to the traditional view of environmental enforcement as a cruel choice between employment and breathable air. The Clean Air Act can serve as a goad to generating better jobs in more innovative technologies—and as a mechanism to reduce health-care costs. The benefits seem worth the price.

What pressures/costs has the law placed on the corporation- is this law fair to all concerns? What might be likely to happen to amend the law or change it in some way? “Sustainability is the foundation that must define our Company and guide our decisions and actions. It is the best path to guarantee merit and dignity to the results we achieve.” 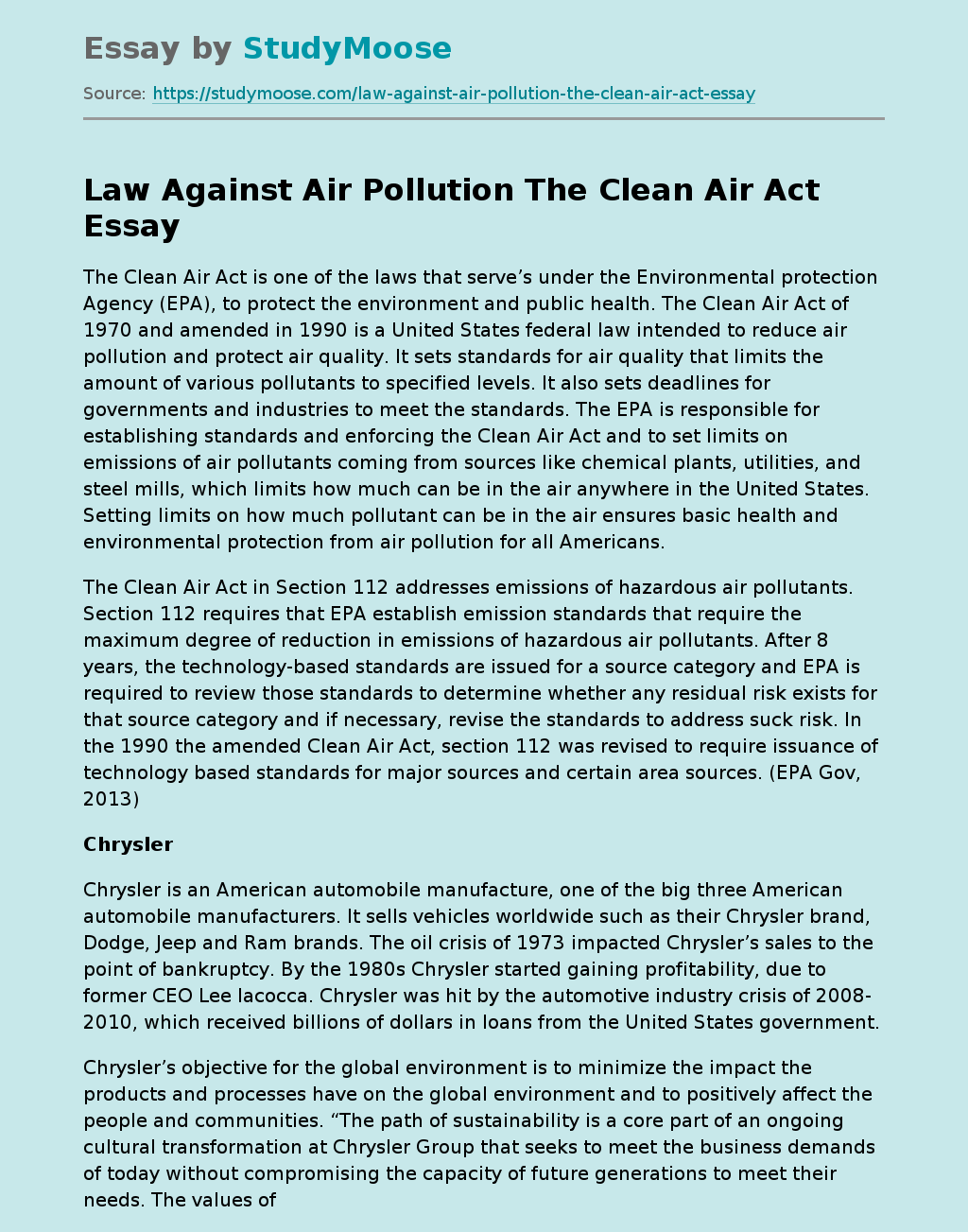