The Pen Is Mightier Than the Sword

Many people would say this is true and the pen is mightier than the sword Think of the power of the media. How “gossip,” and lies, or indeed the truth can destroy a person’s reputation. The Pen is everything but pathetic. Without the pen society would be nothing that it is today. The Laws and theories of scientists such as Newton and Darwin would not exist. Our outlook and knowledge on life, would be entirely different and the work of other scientists, could not have evolved or advanced in the way it has, if it all, without the influence of its predecessors and the pen.

Turn in your highest-quality paper
Get a qualified writer to help you with
“ The Pen Is Mightier Than the Sword ”
Get high-quality paper
NEW! AI matching with writers

In a warfare kind of context ‘the pen’ still has legs to stand on in the form of Gandhi, and how he liberated India with his wise words and knowledge. Also ‘the pen’ is linked with the bad side of having power and a prime example of this is Hitler, who hypnotized an entire nation with his words.

The pen also has two sides, it can destroy a person’s life or enlighten it but a sword can only end lives. As Martin Luther King said “Nonviolence is a sword that heals.” Finally, words are the most powerful thing someone can possess naturally. Words are used to persuade and change through a just and peaceful manner, as compared to immediate action through physical means (the sword). Social commentator Stanley Kurtz argued that: ‘Words are the passage of mind. Killing is the will to take. It is not who can do more or less, but who can make it the best.

Keep that in mind with words, and you will succeed undoubtedly. Not to mention, real quickly, words are always the resolution of a conflict, physically or mentally. For example, when a war ends, a treaty is signed, and that treaty is prominent through words, through context, and through the pen in general. The structure to our constitution, amendments, and many more important documents is all because of the powerful effect of words, and nothing more than that!

Most people would disagree with this statement in the sense that ‘the pen’ shouldn’t affect others opinions if they are stable minded, it has
also been said that history is written by winners and although ‘the pen’ may be a great product for social change, it still doesn’t have such a large impact as ‘the sword’. The word sword symbolizes arms of any kind. The one with the bigger sword will always be victorious, no matter how powerful the opponent’s pen is. With a bigger sword, you inherit the products of the pen. You may claim them as your own. The one with the pen must do what you say, or they die. You have the power of life and death. With swords, things are forced.

With swords, people must obey your every command if they value their lives. Swords have shaped this very world, and the ones with bigger swords have forced their cultures unto their prey to eventually make the world we live in today. An example of when this statement may be considered incorrect is when President Bush, and the Congress, signed off in agreement to attack Iraq, that pen was the cause for thousands of deaths. Throughout history there have been a great many of people who were great penman, but compared to the overall population a very small percent have been successful. Most have been inept with the pen. Whereas throughout history ‘the sword’ has been of great need and use.

Throughout history there have doubtlessly been a larger percent of skilled swordsman (people skilled in the art of warfare) than those skilled in the use of penmanship. A strong argument people would use against this is the Bible, although it does have in it very influential quotes and speeches which are in favour of the pen, some people would say the bible would have not been possible without the sword, for example genesis, how many times is Abraham threatened? Joseph? Jacob? Isaac? Then the book of numbers, documenting battles and wars waged against the Jewish nation. There were many times where they could have been wiped off the face of this planet yet they fought back with the use of the sword. Had it not been for the use of the sword the pen which they so valiantly wielded afterwards would have not been possible. The sword is a means of which to maintain the right, the means of the usage of pen. This is supported empirically throughout history.

The Pen Is Mightier Than the Sword. (2016, Apr 11). Retrieved from http://studymoose.com/the-pen-is-mightier-than-the-sword-essay 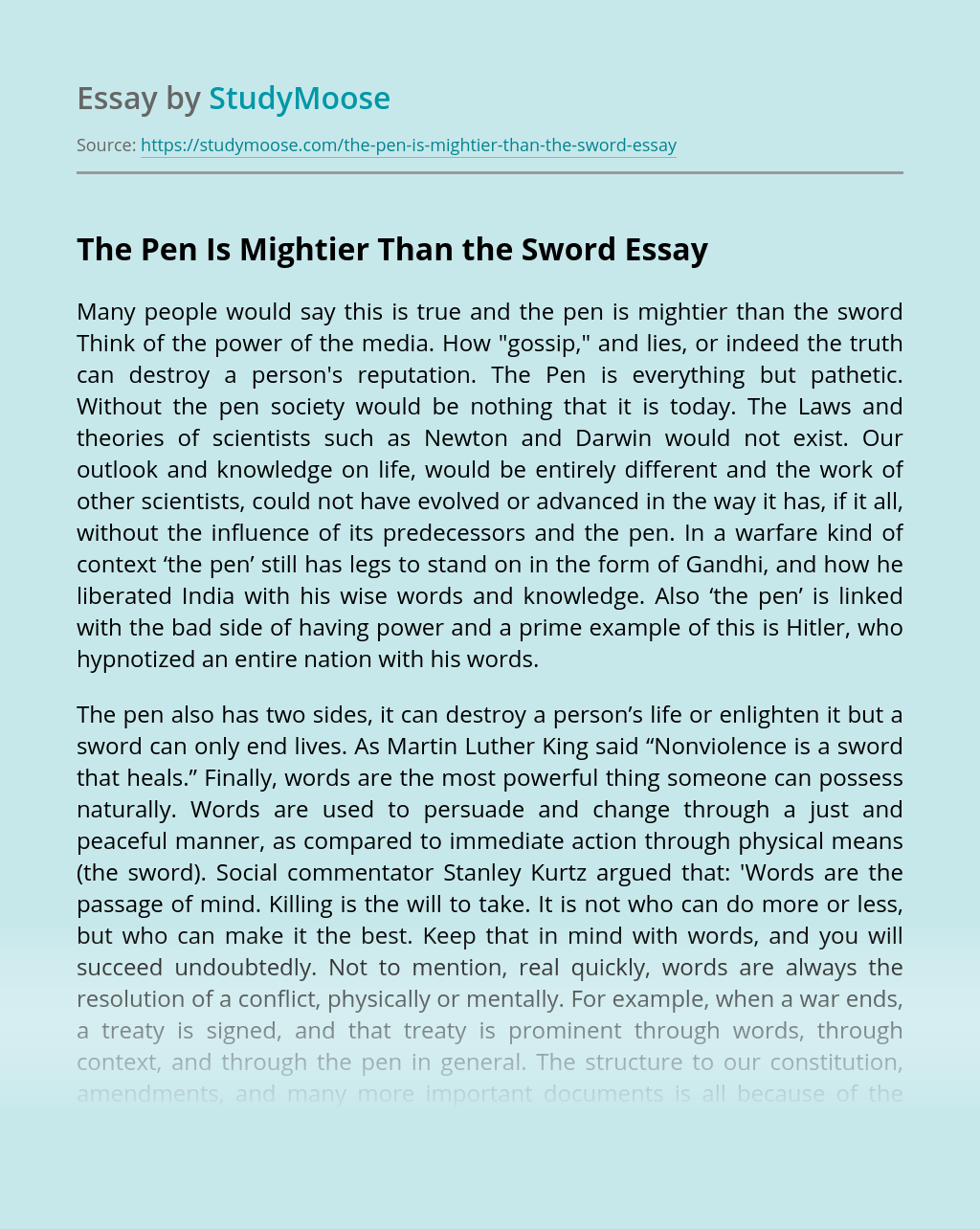 Turn in your highest-quality paper
Get a qualified writer to help you with
“ The Pen Is Mightier Than the Sword ”
Get high-quality paper
Helping students since 2015
Stay Safe, Stay Original