The NHS provides free healthcare services for approximately 64.6 million people in the UK [NHS, no date], however despite being one of the most commonly used statutory services, recent cuts to the funding of the NHS has threatened its stability.

51-53% of the public would argue that so called ‘abusers’ of the NHS, the term ‘abuser’ meaning a person that has consciously made the wrong lifestyle choices and continued to follow a bad routine, jeopardising their own health, should have their privileges of free healthcare taken away from them.

Don't use plagiarized sources. Get your custom essay on
“ National Health Service ”
Get custom paper
NEW! smart matching with writer

Examples of abusers of the NHS may include smokers, heavy drinkers, drug abusers and people with obesity, in other words patients with self-caused illnesses. Over the last two years, there have been an estimated value of 484,700 hospital admissions due to smoking alone [NHS Digital, 2018.]

According to the World Health Organisation, over three million deaths occur globally every year due to harmful use of alcohol [Global Issues in Context, 2018.]

There is much debate about the use, and misuse, of the NHS, with a divide in opinions about how people are using it and how much responsibility we personally hold towards our own health. ‘Sixty-five per cent believe that keeping healthy is primarily down to the individual, with just 7 per cent placing this responsibility with the NHS.’ [The King’s Fund, 16 September 2017]

These were the results of a public survey conducted to 1,151 adults aged 15 and over in England by ‘The King’s Fund’, outlining that majority of citizens in the United Kingdom believe that as a society , we hold a large responsibility towards making the correct lifestyle choices and maintaining a healthy way of life.

These opinions introduce a greater, more controversial debate on whether people who make unhealthy choices should be permitted access to free healthcare, especially at a time during which the financial stability of the NHS is so vulnerable and certain patients will have to be prioritized over others.

Questionnaire surveys show that smokers, drug users, heavy drinkers, and the elderly should receive lower priority than other people.’ [British Medical Journal, no date.] Excluding the elderly, this statement further supports the argument of abusers of the NHS being given a lower precedence than others, or paying for their treatment privately.

While one could reason that everyone has a right to live their lives as they wish, some believe that ‘when this goes against the generally received (medical) wisdom society is required to do only a limited amount to redress the consequences of those choices.’ [British Medical Journal, 2006.]

In other words, the NHS does not require to shoulder the responsibility of the health of those who have consciously made poor lifestyle choices. While some agree with this statement, others argue against it and this is where there comes a conflict in the way the NHS is being run. In this dissertation, I will be questioning the different forms of abuse that may occur in the NHS and to what extent they contribute to the financial instability of the NHS.

The NHS deals with over 1 million patients every 36 hours [NHS Confederation, 2017.] Consequently doctors are faced with the decision of giving certain patients priority over others; the priority patients would be those in worse health and in need of immediate care.

However a study conducted on the public indicated that, ‘treatment for· those with self?induced disease, diseases with both poor and good prognosis, and mild disease were given low priorities.’ [Journal of Health Organisation and Management, 2003]

Self-induced diseases meaning diseases in which the patient is responsible for their condition due to factors such as excessive alcohol consumption, poor diet, lack of physical exercise and immoderate smoking. The growing demand for healthcare and decreasing financial stability of the NHS, its expenditure is estimated to increase from ?120.512 bn to ?126.269 bn [NHS confederation, 2017], is a challenge that the United Kingdom is faced with so it is a responsibility of society to ensure that they are keeping themselves as healthy as possible.

One could argue that excessive smokers seeking healthcare could be seen as a form of abuse to the NHS; smoking extremely was a conscious decision made by the individual therefore they should shoulder the responsibility of their actions. Research specifies that smoking aggravates diseases such as asthma, coronary heart disease, and stroke and lung cancer [Centres for disease control and prevention, 2017] and in 2016 alone, there have been a recorded amount of 77,900 deaths attributed to smoking. [NHS digital, 2018].

While the emotional consequences of smoking-related illnesses impact the patient and families, there is also a colossal burden on the NHS; ?2.6bn was the total smoking-related cost to the NHS in 2015, ?794 million spent on GP visits alone. [Gov.UK, no date].

From 2016-2017, there were an estimate of 484,700 hospital admissions due to smoking-related illnesses [NHS digital, 2018], which is equivalent to over 692 admission per day. This emphasises what a huge burden smoking is to the NHS and what a great difference financially it could make if people who did choose to smoke, did so moderately.

Not only is smoking excessively an issue for the individual themselves, but their company can also be affected; 7 out of 10 cases of lung cancer are linked to smoking, this includes breathing in other people’s cigarette smoke [Cancer Research UK, 2018].

Around 44,500 people are diagnosed with lung cancer annually [NHS, 2015], 31150 cases of which are related to smoking, accentuating the impact on the NHS due to poor lifestyle choices. Coronary heart disease is another likely consequence of excessive smoking, as is angina, both of which can be treated by coronary bypass surgery. Study shows that continuing to smoke after receiving the surgery could result in a reoperation, which is nearly twice as expensive as the first one [British Medical Journal, no date].

This could deprive patients who have never smoked before, or those quit smoking after surgery because budget has become so tight within the NHS. Smoking has become a widespread problem, not only affecting the smokers themselves and the NHS, but society as whole; 72 councils agreed to increase their spending on smoking cessation programmes [Royal College of Surgeons, 2016], in effort to help contain the issue.

On the other hand, there are many arguments against denying smokers their rights to free healthcare. While smoking may jeopardise the health of smokers, it is still a responsibility of the NHS to care for patients and refusing to offer free healthcare goes against the core principles and values of the NHS created by Aneurin Bevan in 1948, ‘meeting the needs of EVERYONE, free to the point of delivery’. [NHS, 2018]

‘Everyone’ meaning all British citizens regardless of their lifestyle choices. Around 90% of the people support these founding principles to this day, demonstrating their significance in society. [The Kings Fund, 2017]

Furthermore one could argue that smokers already have to pay tobacco tax when purchasing cigarettes and this should account for their healthcare. An average pack of 20 cigarettes, with a recommended retail price of ?8.50, will have a total tax burden of ?6.98 (82% of the RRP) [The Tobacco Manufacturers Association, 2016].

While this single tax price may seem trivial, the total tobacco revenue in 2017-2018 was 8.8 billion GBP [The Statistics Portal, 2018], resulting in tobacco taxes being amongst the highest taxes in the UK. This could be seen as excusing for some of the burden of smokers on the NHS consequently allowing excessive smokers to continue to receive free healthcare.

Moreover, by denying smokers free healthcare, it may discourage clients to disclose their smoking habits to their doctors. Study shows that 8% of smokers do not tell their doctors that they smoke [Nicotine and Tobacco Research, 2009]; creating a barrier between healthcare services for smokers and non-smokers will only intensify this percentage. Miscommunication between a doctor and patient may have severe consequences so it is important to ensure that the NHS is not contributing to this.

Due to the health consequences of smoking, smokers are frequent users of the NHS and the British Lung Foundation states that patients who smoke are discriminated against, and that ‘ clinical groups were “prioritising saving money over saving lives” .’ [Global Issues in Context, 2018] Making smokers pay for healthcare that non-smokers would receive for free is only provoking this argument.

In addition to this, one could argue that society does not recognise the difficulty in quitting smoking from once being addicted. Addiction research conducted by the British Medical Journal in 2016 shows that for some smokers it may take up to 30 or more attempts at quitting smoking before they are successful. The NHS states that someone suffering from addiction should ‘see [their] GP’ [NHS Digital, 2018].

Making excessive smokers pay for their treatment is contradicting this statement. Privatising treatment for people with smoking addictions could be viewed as unethical and unfair. As discussed earlier, smoking excessively is a common cause to lung cancer, however not everyone can afford private treatment for lung cancer.

‘A private consultation with a cancer specialist will cost ?100 upwards’ [Cancer Research, 2016]. Not being able to afford treatment for a fatal illness will cause significant dispute between the NHS and the public. 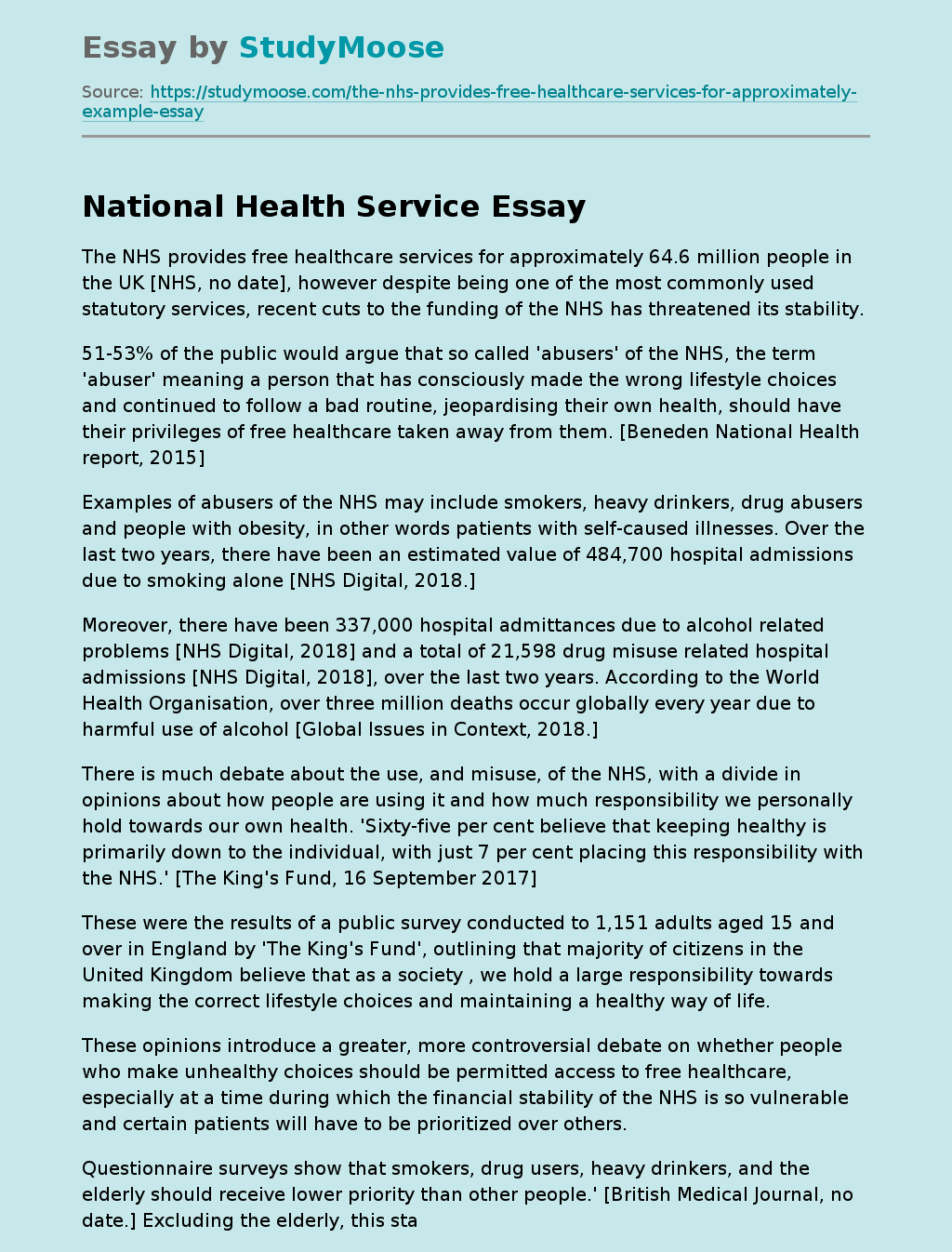