The Most Hated Family in America

The film, “The Most Hated Family in America,” was a very interesting and eye opening film about freedom of speech, interpretation, and consequences of life choices. Before watching this I had no idea that such a family even existed, but after watching it I am somewhat ashamed of what they are doing and feel very bad for the members of their family and the people surrounding them. Louis Theroux did a fantastic job on this documentary; I would not change a thing to his presentation of the Phelps family.

Don't use plagiarized sources. Get your custom essay on
“ The Most Hated Family in America ”
Get custom paper
NEW! smart matching with writer

His approach of staying and interacting with the family created an unspoken aspect of what the family is like and how they regularly act. By tagging along with them in everyday tasks and going to their protests with them it gives the viewers a chance for their own interpretation. Setting aside interview questions and just shooting their normal routine gave unbiased and natural footage. I also thought it was very professional how instead of arguing with them he asked questions about his personal life, which gave them the same opportunity to voice their opinion, but on a situational basis rather than as a defense mechanism.

When I viewed this movie I did not expect to see a family that has gone to such extremes. I watched this alone, but told others about it and they too were as surprised as myself to hear that such a thing is going on in this country and that people feel they have the right to say such hateful things.

I think what they are doing is horrible and they are abusing the right to freedom of speech. There is nothing wrong with having your own opinion, but when it comes to verbally abusing others there should be a restriction.

Not only is it highly disrespectful, but by picketing funerals of fallen soldiers, the people who fight for their rights to freedom of free speech, they are contradicting themselves in a way. I personally am not a follower of the Bible, but this creates a very bad image for the Christian faith in my eyes. To see people purposely hurting others and thinking that is acceptable is not kosher. I think they have taken the word of god to an extreme and over interpreted almost everything. I have heard that the bible says being a homosexual is a sin, but this is America, and people who feel the need to do such things have that right.

If it is a sin, so be it, those people have the freedom to do whatever they feel with their lives. I would never join a group like this because of the damage they are doing not only to those people who are gay, or to the families of fallen soldiers, but to their own family. In the video it showed the Children picketing, they had no idea what it meant or why they were doing it. It also had footage of the 7 year old boy being hit with soda by onlookers. They are brainwashing their children and forcing them into this lifestyle before they can think for themselves.

They are isolating them from being accepted into society, these poor children have no friends, and they have put their children in physical danger by making them do this, people hate them for doing so and will act on that hatred as they did in the video or worse. Although this documentary was successful in portraying little to no bias, it is obvious to me that what the Phelps family is doing is wrong. Seeing how they interact with society and how strongly they believe people should die for their actions is way too extreme. Embracing their values as a family is one thing, and they have every right to feel the way they do.

To not carry out those actions in their personal life is their own choice, but they should not take it to such a level to where they are trying influence others and disrespect them for lacking common beliefs. As we are all aware, America takes pride in its rights for freedom of speech and that is what we are known for, That being said, after viewing this video it is plain to see that those rights are sometimes taken for granted and abused by people like the Phelps family. Freedom of speech is something we should all appreciate and value as Americans, but clearly it is not always a good thing.

The Most Hated Family in America. (2016, Dec 25). Retrieved from https://studymoose.com/the-most-hated-family-in-america-essay 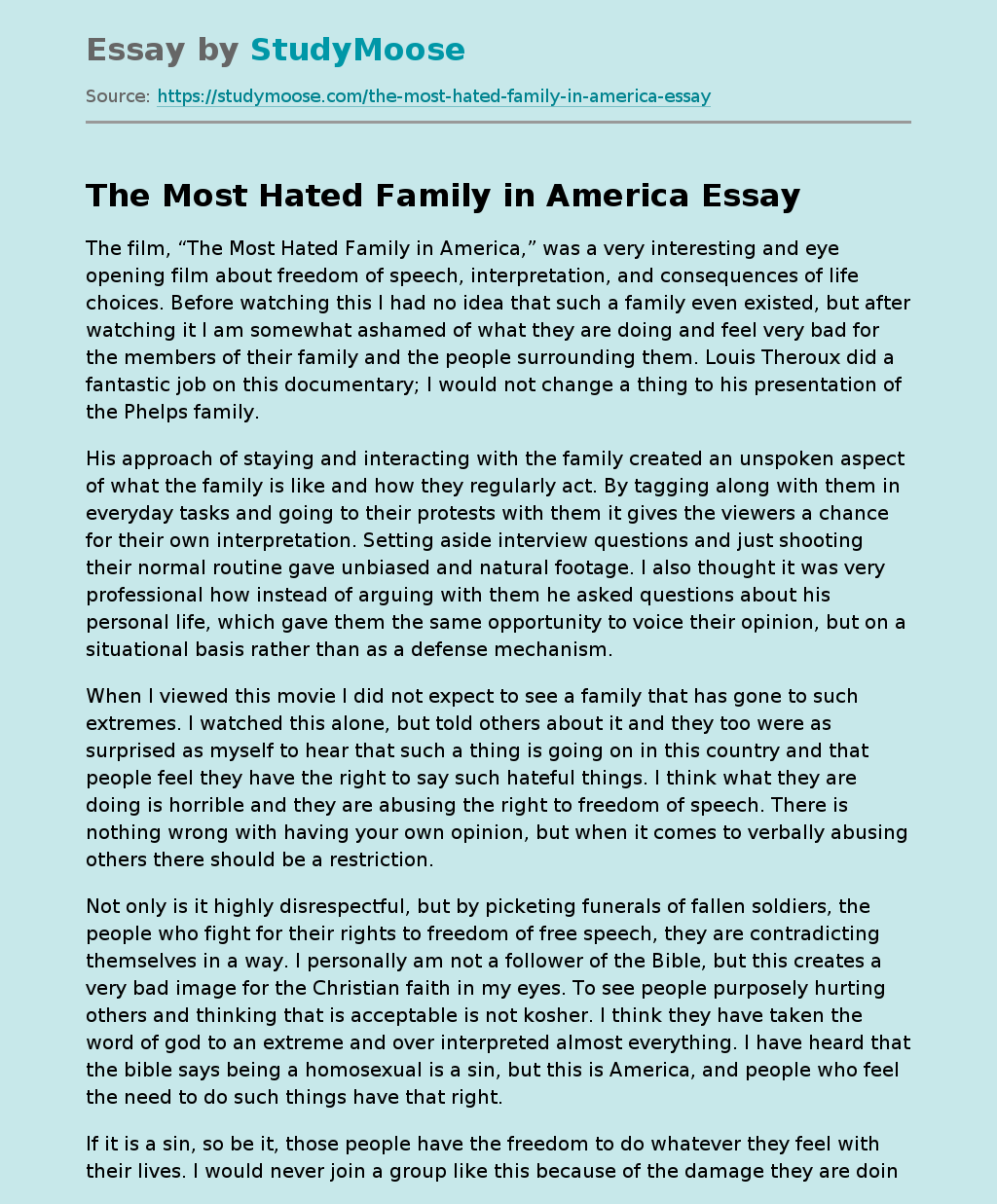