The Modern Translation of Romeo and Juliet

It might be hard reading the original text of Shakespeare’s Romeo and Juliet, but the modern translation might not be any better. The initial prose of the play is ancient English, written circa 1595. Due to this, in 2003, a publishing company named SparkNotes Publishing created No Fear Shakespeare: Romeo and Juliet. This transcript of the play includes a more modern translation alongside Shakespeare’s original words. This might be useful for the average reader, say, a high schooler trying to make the grade.

Don't use plagiarized sources. Get your custom essay on
“ The Modern Translation of Romeo and Juliet ”
Get custom paper
NEW! smart matching with writer

However, for literary analysts, the translation messes with the meaning of the text. An abundance of nuances are lost in a modern translation of Shakespeare’s Romeo and Juliet because of the significant knowledge that isn’t common now or the jokes and phrases that cannot be translated, leading to a misunderstanding of the play as a whole.

Foremost, in medieval England, knowledge of mythology was incredibly common, despite the fact that the majority followed Roman Catholicism. Throughout Romeo and Juliet, Shakespeare constantly alludes to mythological beings and deities that the common person nowadays likely has no knowledge of.

According to the original play, “’ Else, would I tear the cave where Echo lies, and make her airy tongue more hoarse than mine, with repetition of ‘My Romeo!’” (Shakespeare). From the annotations that No Fear Shakespeare: Romeo and Juliet gives, Echo is revealed to be a woman from Greek mythology. Disgraced by the one she loved, Echo spent the rest of her days shouting his name in a cave, but one wouldn’t get that kind of information from the translation alone.

Also, Shakespeare didn’t just refer to Greek, instead reaching across many different cultures for his figurative language. From the original play, “’He’s tougher than the Prince of Cats’” (Shakespeare). Here, Mercutio refers to Tybalt as the Prince of Cats, a character from a medieval tale whose first name was, coincidentally, also Tybalt. Most people would have to look up the term even with the translation’s comments. Although, to most people, the modern adaptation’s notes might be sufficient, to get a deeper insight, one must understand the history behind the sayings, which the contemporary interpretation cannot provide.

Likewise, there are many words used in Romeo and Juliet that are untranslatable, or phrases that were used commonly back then that aren’t now. There is a scene in the play, when Romeo, Mercutio, and Benvolio are outside of the Capulet party dressed as maskers. Romeo is reluctant to enter, and Mercutio details to him the story of Queen Mab, a fairy who goes around giving everyone pleasurable dreams. There are distinct differences between the play and the 1996 movie, which is set in a more modern sense. In the movie, Mercutio shows “Queen Mab” as a pill Romeo can take to actually enjoy the party and forget about his misery (Luhrmann). The movie’s interpretation of this scene is that Romeo can enjoy “Queen Mab”, enjoy what she is giving to him, and be happy. In the play, however, the tone is much different, bordering on ranting. From it, it is shown that Mercutio is simply poking fun at Romeo and his agony (Shakespeare). In that time period, men were not supposed to be emotional, and Mercutio is definitely exploiting that. All in all, there can be different interpretations of certain phrases, but in all cases, the original author’s version takes precedence because in that is the basis for the remakes, and often that is not present in modern adaptations.

Furthermore, in Romeo and Juliet, there are a myriad of “jokes”, because, of course, Romeo and his friends are of the teenage age. In the original play, the morning after the party at the Capulets’ finds Romeo engaged in suggestive wordplay with Mercutio. According to the production, “’…for this driveling love is like a great natural that runs lolling up and down to hide his bauble in a hole’” (Shakespeare). Everything aside, there is a hidden meaning behind the rudeness. According to the SparkNotes website: “Mercutio’s point is that at its root, love is really just sexual desire” (SparkNotes, Sex). Whether anyone agrees with it or not, that is Mercutio’s view on love in a nutshell. That meaning is lost in the contemporary rendering, being lost to sexual jokes. In summary, while the jokes are apparent in both renditions, only the authentic version implies the existence of a hidden meaning behind them.

Lastly, the time period in which Romeo and Juliet takes place provides more context for some of the remarks made, and why a certain level of emphasis should be put on specific stage directions. In the more current remake, there is a specific stage direction that deserves more attention. From the modern translation, “(taking JULIET’S hand)” (SparkNotes, No Fear Shakespeare: Romeo and Juliet). This is a monumental scene because, in Shakespeare’s time, the Black Plague was ravaging town after town. This significance is portrayed better in the 1968 movie adaptation, which was made to portray Shakespeare’s time period. In the film, the guests at Capulet’s party are seen dancing with hands inches apart, terrified of contracting the Plague. That shows how important two people must think the other is if they permit them to hold each other’s hand. In Shakespeare’s original prose and in the 1996 film, such societal customs were more plainly evident; in the more recent production, the effect is lost as much of the modern population does not live with the fearsome Black Death.

However, it can be argued that No Fear Shakespeare: Romeo and Juliet does a wonderful job of translating the medieval English into something readable for the twenty-first century. Take as an example the famous prologue, a short summary of the tragedy that is their love. From the translation, “Their unfortunate deaths put an end to their parents’ feud” (SparkNotes, No Fear Shakespeare: Romeo and Juliet). This rewrites a rather confusing portion of the monologue into an easy-to-read piece of text. However, this will not do, as the prologue of Romeo and Juliet is legendary. Everyone who has read the play recognizes the first two lines, as according to the original play, “’Two households, both alike in dignity (In fair Verona, where we lay our scene)” (Shakespeare). This tragedy of “death-mark’d love” is meant to be a play, dramatized for a live audience. In translation, it loses its inflection and tone, making it readable but not viewable.

In conclusion, quite a bit of figurative language and subtle touches are lost when translating Shakespeare’s Romeo and Juliet into a modern version due to untranslatable phrases, uncommon mythology, the time period in which it takes place, and certain jokes that make the reader misunderstand the play as a whole. The reader will have to research if they want to understand the mythological allusions behind metaphors. It is also imperative that they must understand the time period, jokes, and phrases that were commonly used then that aren’t now. The modern translation that No Fear Shakespeare: Romeo and Juliet provides cannot hope to encompass all those topics, making the original prose the ideal choice. All in all, No Fear Shakespeare: Romeo and Juliet succeeded in one thing: the made Shakespeare’s dramatic romantic tragedy into a modern-day soap opera.

The Modern Translation of Romeo and Juliet. (2021, Sep 20). Retrieved from https://studymoose.com/the-modern-translation-of-romeo-and-juliet-essay 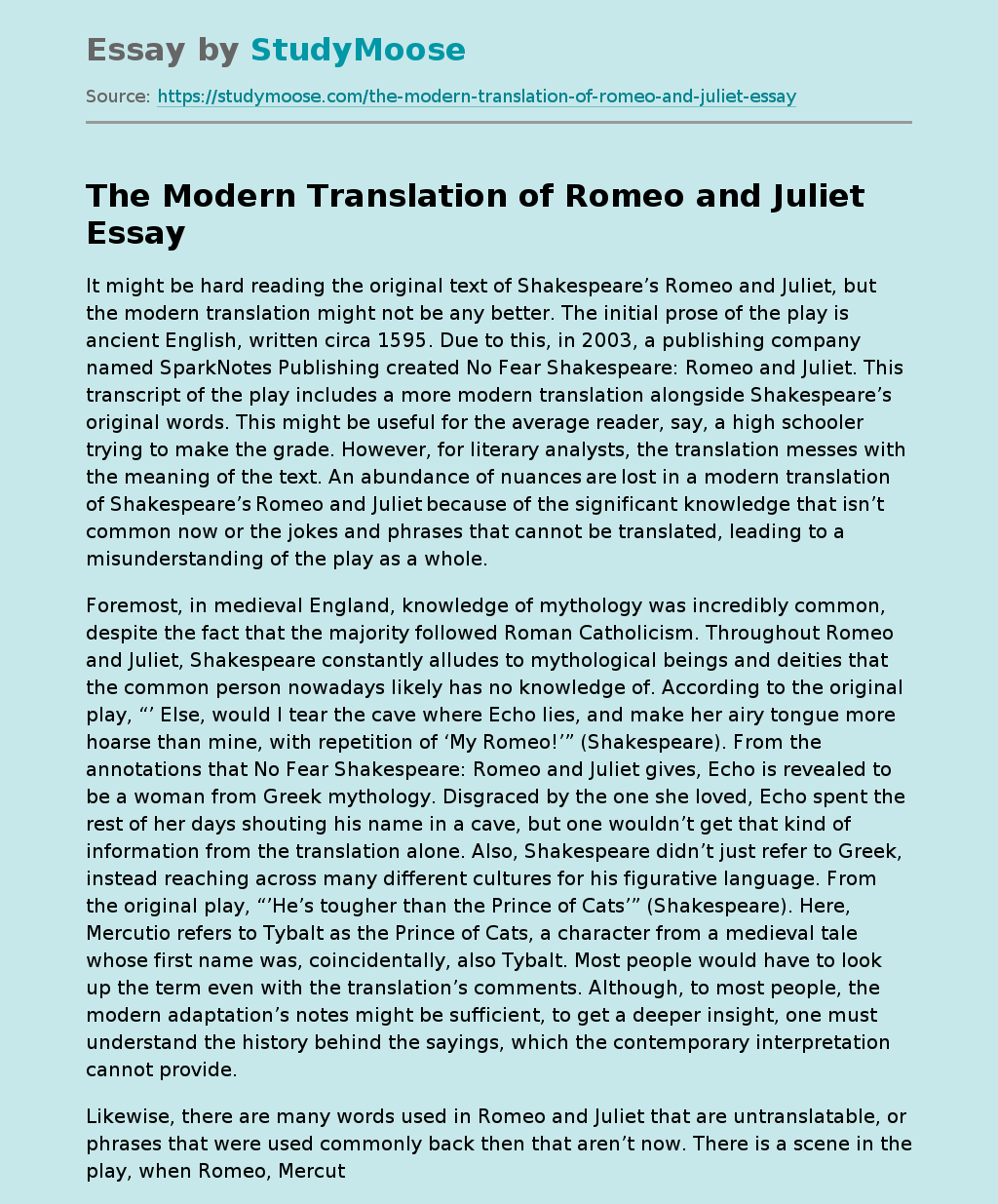