Presentation of the story

The short story The Model Millionaire is part of the book Lord Arthur Savile’s Crime and Other Stories, a collection of short semi-comic mystery stories written by Oscar Wilde and published in 1891. It is a third-person narrative, whose narrator starts the text expressing his opinions and judgments about the characters. Hughie, the main character, is described as a very handsome man, whose beauty is useless, because he is poor and does not have much intelligence. ‘Unless one is wealthy there is no use in being a charming person.

Turn in your highest-quality paper
Get a qualified writer to help you with
“ The Model Millionaire, Oscar Wilde ”
Get high-quality paper
NEW! AI matching with writers

The poor should be ordinary and practical’ is the beginning of this interesting story and reveals a lot about it and its author.

Short biography of the author

Oscar Fingal O’Flahertie Wills Wilde (1854 – 1900) was a famous playwright, novelist, poet and critic. His wit, intelligence, sarcasm, criticism, irony and paradoxical points of view made his style unmistakable and admired. He was born in Dublin and his mother, Lady Jane Francesca Wilde (1820-1896), was a successful poet and journalist and a society hostess.

This may explain, and the fact he was always involved with the high society, Oscar Wilde’s opinion about the aristocracy and how well he knew their nature. He studied at Oxford, where he started developing his poetry and ideas.There, he met the Aestheticism, or Aesthetic movement, whose doctrine, which can be summarized by the sentence’Art for Art’s Sake’, influenced his work immensely.

He wrote nine plays – among them The Importance of Being Earnest(1895), one of the most well-known and acclaimed by the critics, numerous poems, short storiesand essays– including fairy tales forhis twosons, but only one novel, The Picture of Dorian Gray (1891).

His allegedly homoerotic overtones were a polemic issue in that very conservative society. In fact, Wilde’s life was a scandal due to his sexuality: in 1891, he started an affair with the son of an aristocrat, Lord Alfred Douglas, nicknamed ‘Bosie’, whom he considered the love of his life.His marriage with Constance Lloyd ended two years later. He was arrested in 1895 accused of homosexuality, gross indecency and sodomy. He was released two years later and wroteThe Ballad of Reading Gaol(1898), considered the most powerful of all his poems, in whichhe talks about the terrible imprisonment conditions he and other men suffered. With a ruined reputation, he died poor, of cerebral meningitis, in a cheap hotel in Paris.

Summary of the story

Hugh Erskine is a very good-looking man with little intelligence and no money. He tried everything to make money, but he failed terribly. He is in love with Laura Merton, but her father, although fond of Hughie, does not want to hear a word about marriage because the best-looking pair in London simply could not afford living together. The former army officer will only permit it if Hughie gets ten thousand pounds. One day he visits his great friend Alan Trevor, an artist firstly attracted by Hughie’sstunning beauty and then by his good heart. In his house, Hughie encounters the painter finishing a big-sized picture of a beggar, whose model was there: an old, sad and tired man with worn out, torn clothes, holding a stick in one hand and his hat in another.

Hughie gets so touched by his miserable face and little income he will get as Trevor’s model that, after Trevor leaves the room for a moment, he puts one pound, most of the money he has for the following two weeks, into the beggar’s hand, who becomes very grateful. He leaves Trevor’s house with a little red face and goes home walking, without money for transport. At night, he meets Trevor, who tells what happened after Hughie left: the beggar became fond of him and made Trevor tell him about his life, including his love for Laura and all the obstacles to the marriage. When Hughie complains about his attitude, he explains that the beggar is actually one of the richest men in Europe, Baron Hausberg. Hughie, shocked and feeling stupid, confesses that gave the beggar some money.

Trevor laughs a lot and tries to calm him down by saying that Baron Hausberg was very satisfied and interested in him. Despite that, Hughie continues to feel foolish and unhappy, and decides to go home. The next morning, Mr. Gustave Naudin, Baron Hausberg’s representative, goes to Hughie’s house, who soon starts apologizingfor his attitude, because he thinks he offended the nobleman. However, Mr. Naudin only gives him a letter from the wealthy man.On the outside is written ‘A wedding present from an old beggar’ and inside there is a ten-thousand-pound cheque.

Hughie Erskine, a very handsome man with no talent for business, little intelligence but a generous soul, wants to marry Laura Merton, but has no money to do so. Alan Trevor, a real talented artist and a great friend of Hughie’s, is a strange and rough man, with a spotty face and long red beard, whose wonderful work, although, is very popular. The beggar, who actually is the wealthy Baron Hausberg, is an apparently old and miserable man who is working as a model for Trevor, to whom Hughie gives some money.

Some characteristics of this short story are similar to the ones existing in The Picture of Dorian Gray. One of them is the bitter and skeptical comments found both in the narrator’s and the characters’ speech. In The Model Millionaire, they appear less but are implacable, like those which refers to the main character’s description: ‘He was not, I must admit, a man of great intelligence’. After describing Hughie’s various unsuccessful business tries, he says: ‘To make things worse, he was in love’, adding to his roll of failures the idea of getting marry to Laura. However, differently toThe Picture of Dorian Gray, the latter ends happily and seems to convey a moral message: if you act right, things will end up well for you. It was surprising for me, because I expected a dramatic finale like Dorian’s.

Despite that, Wilde’s skeptical ideas overlap even such a happy end: if Hughie had not met Baron Hausberg, if Baron Hausberg was not rich, if Baron Hausberg was not the beggar, Hughie could never marry Laura. It was only a matter of luck. In fact, Hughie’s attitudes were always really uninterested and true, but what counts for this society is being rich. Money is the real x factor to change the main character’s life. This is showed clearly by the narrator when he says ‘it is better to have a permanent income than to be interesting’. Hughie’s qualities, including his good heart, would have made no difference in his life if that providential encounter had not happened. In the full version, Trevor is the best man and Baron Hausberg made a speech at Hughie and Laura’s wedding.The last sentence is: ‘’Millionaire models,’ remarked Alan, ‘are rare enough; but, by Jove, model millionaires are rarer still!’’.

By helping the man who helped him without knowing he was rich,Baron Hausberg isthe millionaire model who turned into a model millionaire, saving Hughie’s life from absolute failure. Nevertheless, in the story, Trevor’s opinion about the nobleman is clear: he tells Hughie he will never have his money back because the baron is a man who deals with the other’s money. And after understanding why he was so interested in Hughie, Trevor says he would keep the pound, give him some money in payment ‘and have a good story to tell after dinner’. Surely, Trevor got as surprised as Hughie with Baron Hausberg’s such demonstration of charity. The baron, thus, saved his own soul,using his wealthy to aid the good poor people, represented by Hughie. 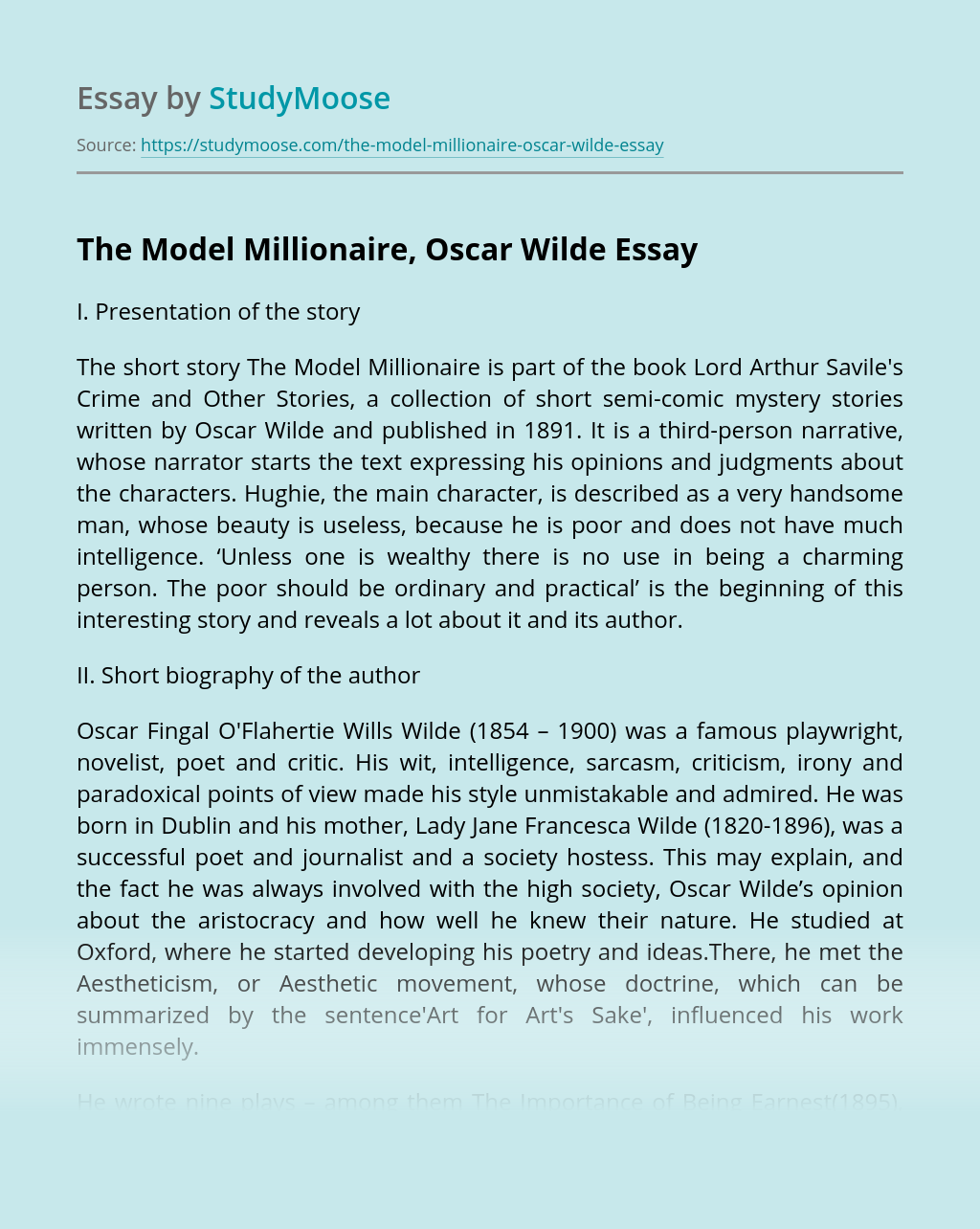 Turn in your highest-quality paper
Get a qualified writer to help you with
“ The Model Millionaire, Oscar Wilde ”
Get high-quality paper
Helping students since 2015
Stay Safe, Stay Original