The Martian revolves around the lone inhabitant of Mars, Mark Watney and his efforts to return to Earth. The movie starts by showing the crew of the Ares III, in the year of 2035, exploring the surface of Mars. A strong dust storm blows through and the crew is forced to evacuate. Mark Watney is hit on the head by flying debris, while evacuating, and is pulled into the storm, and believing him to be dead- Mission commander Melissa Lewis orders the crew to take off and return to the Hermes.

Don't use plagiarized sources. Get your custom essay on
“ The Martian Plot Summary ”
Get custom paper
NEW! smart matching with writer

After the storm had passed, Watney wakes up to a low-oxygen alarm and returns to their living quarters. He operates on himself to remove the debris that was stuck in his stomach region. He starts a video diary and knows that his only chance of rescue is in four years’ time, on the next mission to Mars, which will land 3200 kilometres away from his current position.

As he is a botanist, Watney uses his own faeces to fertilise the soil and produces water by extracting hydrogen from the rocket fuel that was left behind and uses potatoes that were intended for their Thanksgiving dinner, to create his own replenishable food supply.

He also modifies the rover to be able to travel over longer distances. After his funeral, Mindy Park discovers that the ‘hab’ area has changed and realises that Mark must have survived. The news is released and despite the Hermes flight director’s objections, the Hermes crew remains uninformed. Watney recovers a nearby Pathfinder probe and uses it to create a primitive, but still effective, means to communicate with Earth.

Watson becomes angry when he finds out that his crew members aboard the Hermes still do not know that he is alive, which results in them being informed. A space probe that is filled with food is prepared on Earth while Mark’s crops are destroyed due to a malfunction in the airlock. News of this causes the usual safety inspections to be skipped, and the space probe to be launched prematurely, which then fails 40 seconds after it takes off. Watney learns of the news and believes that he is sure to die.

The Chinese learn of this and offer to let NASA make use of their rocket to repeat the mission. An alternate plan is made and the Taiyang Shen -the Chinese rocket- is sent to give supplies to the Hermes and “slingshot” it back towards Mars. The crew aboard the Hermes vote unanimously in favour of the plan, and thus, it is put into action. Watney then begins the journey to the rendezvous point where he has to lighten the craft to be able to meet up with the Hermes when it arrives. Even with the alterations Mark made, the craft falls short and the Hermes has to manoeuvre the ship, and thereby waste most of its fuel supply, to be able to reach Mark.

However, Mark is still too far away so Commander Lewis makes use of a manned manoeuvring unit to get closer to Mark but still cannot reach him. Mark pierces his glove and uses the pressurised air to move himself towards Lewis, where they are finally reunited after 560 sols. After they return to Earth, Mark becomes a survival instructor for astronaut candidates and all of the crew members that were on the Ares III mission, and those that were involved in his rescue have started new lives. Mars is largely neglected in this series of films, the last martian film being Conquest of space. But there is a common theme of growing plants, which has always been a human aspiration on mars. It is nice to look back on that one and see how much the two differ. 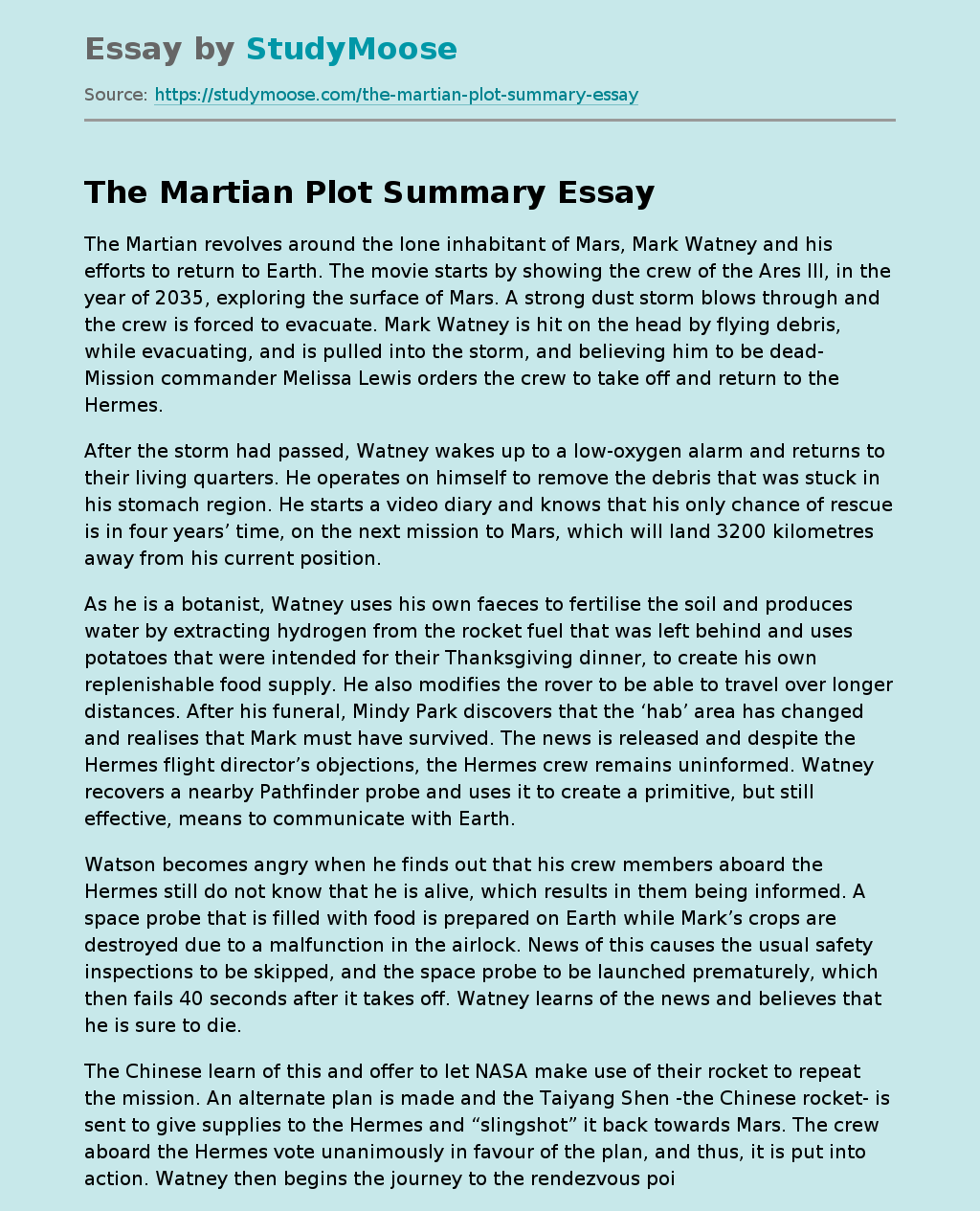