The Man Who Was Almost A Man English Literature

The Man Who was Almost a Man by Richard Wright, is a coming of age story that also showcases the main character, Dave Saunders, struggle with poverty and racism as well as his struggle to gain power. This short story mainly critiques the social structure of the powerful over the weak. It also as a theme of black vs. white. In the course of my essay I will give some background information on Naturalism, as well as how racism and a search for power affects Dave in the story and the journey this force takes him on.

Don't use plagiarized sources. Get your custom essay on
“ The Man Who Was Almost A Man English Literature ”
Get custom paper
NEW! smart matching with writer

I will also demonstrate what the gun and the mule symbolize in the story.

Naturalism writers such as Richard Wright write about characters that face environmental, social, or economic forces that they cannot control or overcome. “In naturalist novels, humans are doomed by their own shortcomings.” (Baym) Naturalism portrays humans as animals in the world. In Freudian terms, naturalist literature is written to show how the id has the upper hand over the superego and the ego.

Naturalism comes to the conclusion that people’s choices are already determined by natural or scientific forces that make people behave in a certain way.

In “The Man Who Was Almost a Man”, Wright makes the main character Dave Saunders a servant to racial hardship. He demonstrates how whites always have an upper hand over blacks. Dave is just like his parents; he is vulnerable to white men in power and money such as his boss Mr.

Hawkins and the shop owner Joe. He will never have the power or the money to reach his full potential. Dave lives in a world where he has no power, whether it be personal or economic. In his eyes, he lives a life full of humiliation and abuse. He works a lowly job for money that is given directly to his mom, who with his dad, he is forced to obey. He is also subjected to constant belittling from the hands of his fellow field hands. He has a growing sense of shame that comes from the economic and social forces that keep him from going after his dreams and reaching his full potential.

In turn, Dave sees that having a gun is his only option to gain respect and to establish himself in the community. In the short story the gun symbolizes all sorts of things. It stands for things he doesn’t have such as power, respect, and independence. All of these things he is desperately seeking. This makes him see the gun as his only solution to overcome all of his struggles and to compensate for all of his shortcomings. He feels like the gun would make him a man even though he has no idea how to fire one. Dave also thinks that the gun would give him independence that he doesn’t have. He somehow believes that the gun would get him out of the fields and give him bigger and better opportunities.

The story follows along with history. Dave’s struggle with racism reflects the struggle of African Americans to get more rights and freedoms ever since the end of the civil war. Yes they were free but they were still lacking opportunities. Even though African Americans had tried to get equality and economic leverage in the 19th century, it did not become a movement until the 20th century. Many African Americans where stuck plowing lands for white owners with little compensation just like Dave in the story. Segregation also had a hand in making sure that blacks were kept in their rightful place. Eventually, however slowly, social patterns started to change because blacks began to move north for better opportunities. In the story, Dave suddenly leaves in the end which could pay homage to this movement or so-called Great Migration. This could also be shown to portray a refusal to accept the ways that his family and ancestors had been pushed into poverty and had hope and promise taken away from them.

In the short story Dave says, “Could kill a man with a gun like this. Kill anybody, black or white. And if he were holding his gun in his hand, nobody could run over him; they would have to respect him.” (Wright) The gun serves as an equalizer. It blurs the color line making Dave think the gun will make others respect him. He thinks that if he has a gun, he will have power and respect over everyone whether they are black or white. It also is supposed to give him independence but it in turn does the opposite by making him even more committed and obligated to Mr. Hawkins since it will take him two years to pay off his debt after shooting Jenny the mule. In actuality, Dave associates having a gun with power which brings change but makes him take on a journey to adulthood that he was not quite ready for.

The mule can symbolize Dave himself. The mule is a servant to the land and Mr. Hawkins. Dave feels like he is stuck just like Jenny. He is bonded to a plow with no rewards or hope of escape or becoming anything better than what he is. Dave feels that he is destined to be just like Jenny even stating, “They treat me like a mule, n then they beat me.” (Wright) Even though the death of Jenny is accidental, it can showcase Dave’s unconscious desire to get Mr. Hawkins. By getting rid of one of Mr. Hawkin’s symbols of power and money, Dave is lashing out at a social order and economic system that he will always be left out of because he is black.

A common theme in the story is lying. Dave’s lies showcase that he is disconnected from the world and shows that he isn’t prepared for adulthood. He is constantly trying to twist the truth to his favor. He does this to first buy the gun and then to avoid the punishment of killing Jenny. He lies to his mom to get the money to buy the gun by telling her that he plans to give the gun to his father after he buys it. He then lies about where the gun is saying he threw it in the creek so as not to give up the gun.

This comes back to what Richard Wright is critiquing in his short story. He is showing that in the social order in the time that his story takes place, whites are superior to blacks. Dave is a slave to history. He feels he is destined to be just like the rest of his family. He feels like he will always be a slave to the whites. He craves respect and sees getting a gun as his way out when in turn it just makes him seem like a child, which is the opposite of what he was trying to do. By playing around with the gun instead of giving it to his mom like he was supposed to do, he shows that he is immature and not ready for manhood. It also leads to him killing an innocent animal. The story also shows that Mr. Hawkins was actually a kind man. Instead of firing Dave or demanding instant repayment, he offers him a repayment solution and lets him keep his job. However, Dave still resents him because of the power and privilege that he possesses.

In conclusion, Dave is trying to overcome the social structure that is forced on him by buying a gun to make others see him as a man and not just some little boy and to give him power. His plan eventually backfires causing him humiliation and showing his immaturity. Also it ruins any chance of the adults around him showing him respect. The force that Richard Wright critiques in this story is the social structure of black vs. white and power vs. weakness. This impacts the main character Dave, who is an African American, to buy a gun to make him feel powerful over his peers including his white boss. Dave eventually tries to combat his failed plan by running away to better opportunities.

The Man Who Was Almost A Man English Literature. (2019, Aug 19). Retrieved from https://studymoose.com/the-man-who-was-almost-a-man-english-literature-essay 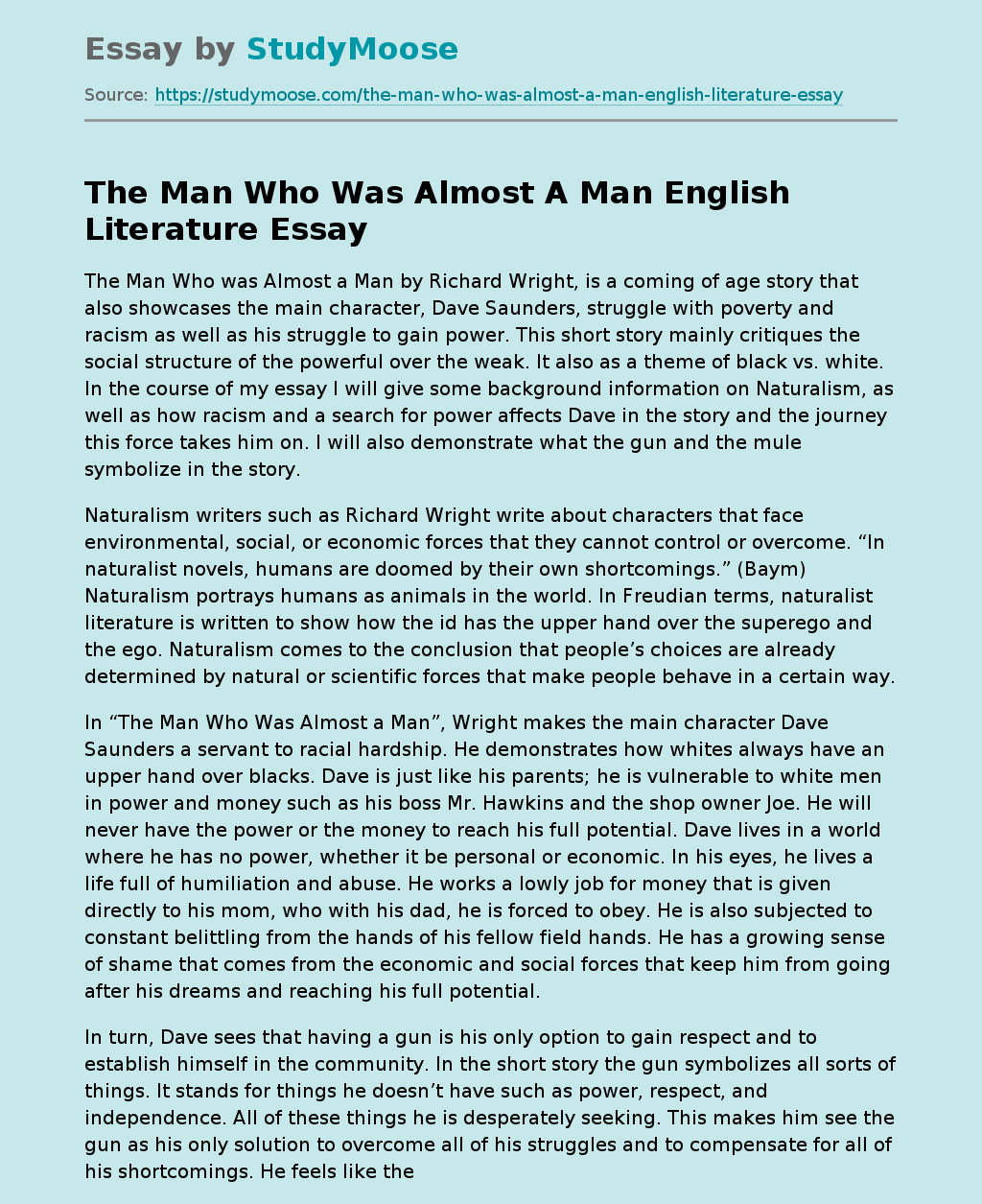