The Legend of Maria Makiling

The many legends of Mariang Makiling tell of a young woman who lived on the beautiful mountain that separates the provinces of Laguna and Tayabas. Her dwelling place was never definitely known, because those who had the good luck to deal with her would wander about for a long time lost in the woods, unable to return; neither did they remember the way, nor were they agreed as to the place and its description.

Don't use plagiarized sources.
Get Your Custom Essay on The Legend of Maria Makiling Just from $13,9/Page

While some say her home was a beautiful palace, bright as a golden reliquary, surrounded by gardens and fine parks, others assert that they saw only wretched hut with a patched roof and bamboo sides. Such a contradiction may give rise to the belief that both parties were romancing, it is true but it may also be due to the fact that Mariang Makiling, like many persons in comfortable circumstances, might have had dwelling places. According to eyewitnesses, she was a young woman, tall and graceful with big black eyes and long and abundant hair.

Her colour was a clear pure brown, the kayumangging kaligatan, as the Tagalog say. Her hands and feet were small and delicate and the expression of her countenance always grave and serious. She was a fantastic creature, half nymph, half sylph, born under the moonbeams of Filipinas, in the mystery of its ancient woods, the murmur of the waves on the neighbouring shore. According to general belief, and contrary to the reputation imputed to the nymphs and goddesses, Mariang Makiling always remained pure, simple, and mysterious as the genius of the mountain.

An old maid-servant we had, an Amazon who defended her house against the outlaws and once killed one of them with a lance thrust, assured me that she had in her childhood seen her passing in the distance over the reed grass so lightly and airily that she did not even make the flexible blades bend. They said that on the night of Good Friday, when the hunters built bonfires to attract the deer by the scent of the ashes of which these animals are so fond, they have discerned her motionless on the brink of the most fearful abysses, letting her long hair float in the wind, all flooded with the moonlight.

Then she would salute them ceremoniously, pass on, and disappear amid the shadows of the neighbouring trees. Generally everyone loved and respected her and no one over dared to question her, to follow, or to watch her. She has also been seated for a long periods upon a cliff beside a river, as though watching the gentle currents of the stream. There was an old hunter who claimed to have seen her bathing in a secluded fountain at midnight, when cicadas themselves were asleep, when the moon reigned in the midst of silence, and nothing disturbed the charm of solitude.

In those same hours and under the same circumstances was the time when the mysterious and melancholy notes of her harp might be heard. Persons who heard them stopped, for they drew away and became hushed when any attempt was made to follow them up. Her favourable time for appearing, it is said, was after a storm. Then she would be seen scurrying over the fields, and whenever she passed, life, order, and calm were renewed. The trees again straightened up their over-thrown trunks, and all traces of the unchained elements were wiped away.

When the poor country folk on the slopes of Makiling needed clothing or jewels for solemn occasions of life, she would lend them and besides, give her a pullet white as milk, one that had never laid an egg, a dumalaga, as they say. Mariang Makiling was very charitable and had a good heart. Now often has she not, in the guise of a simple country maid, aided poor old women who went to the woods for firewood or to pick wild fruits, by slipping among the latter nuggets of gold, coins, and jewels. A hunter who has one day chasing a wild boar through the tall grass and thorny bushes of the thickets came suddenly upon a hut in which the animal hid.

Soon a beautiful young woman issued from the hut and said to him gently, “The wild boar belongs to me and you have done wrong to chase it. But I see that you are very tired; your arms and legs covered with blood. So I come in and eat and then you may go on your way. ” Confused and startled, and besides charmed by the beauty of the young woman, the man went in and ate mechanically everything she offered him, without being able to speak a single word. Before he left, the young woman gave him some pieces of ginger, charging him to give them to his wife for her cooking.

The hunter put them inside the crown of his broad hat and after thanking her, withdrew in content. On the way home, he felt his hat becoming heavy so he took out many of the pieces and threw them away. But what his surprise and regret when the next day he discovered that what the he had taken to be ginger was solid gold, bright as a ray of sunshine. Although he tried to look for them later, he could never find even one. But for many years now, Maria Makiling’s presence has not been manifested on Makiling. Her vapory figure no longer wanders through the deep valleys or hovers over he waterfalls on the serene moonlight nights. The melancholy tone of her harp is no longer heard, and now lovers get married without receiving from her jewels and other presents. Many fear that she has disappeared forever, or at least, she avoids any contact with mankind. Yet on the side of the mountain, there is a clear, quiet pool, and the legend persists that the vapory figure may still be seen reflected in this pool in the mists of early dawn, and from time to time people of the countryside go to watch for her there.

The Legend of Maria Makiling. (2016, Nov 05). Retrieved from https://studymoose.com/the-legend-of-maria-makiling-essay 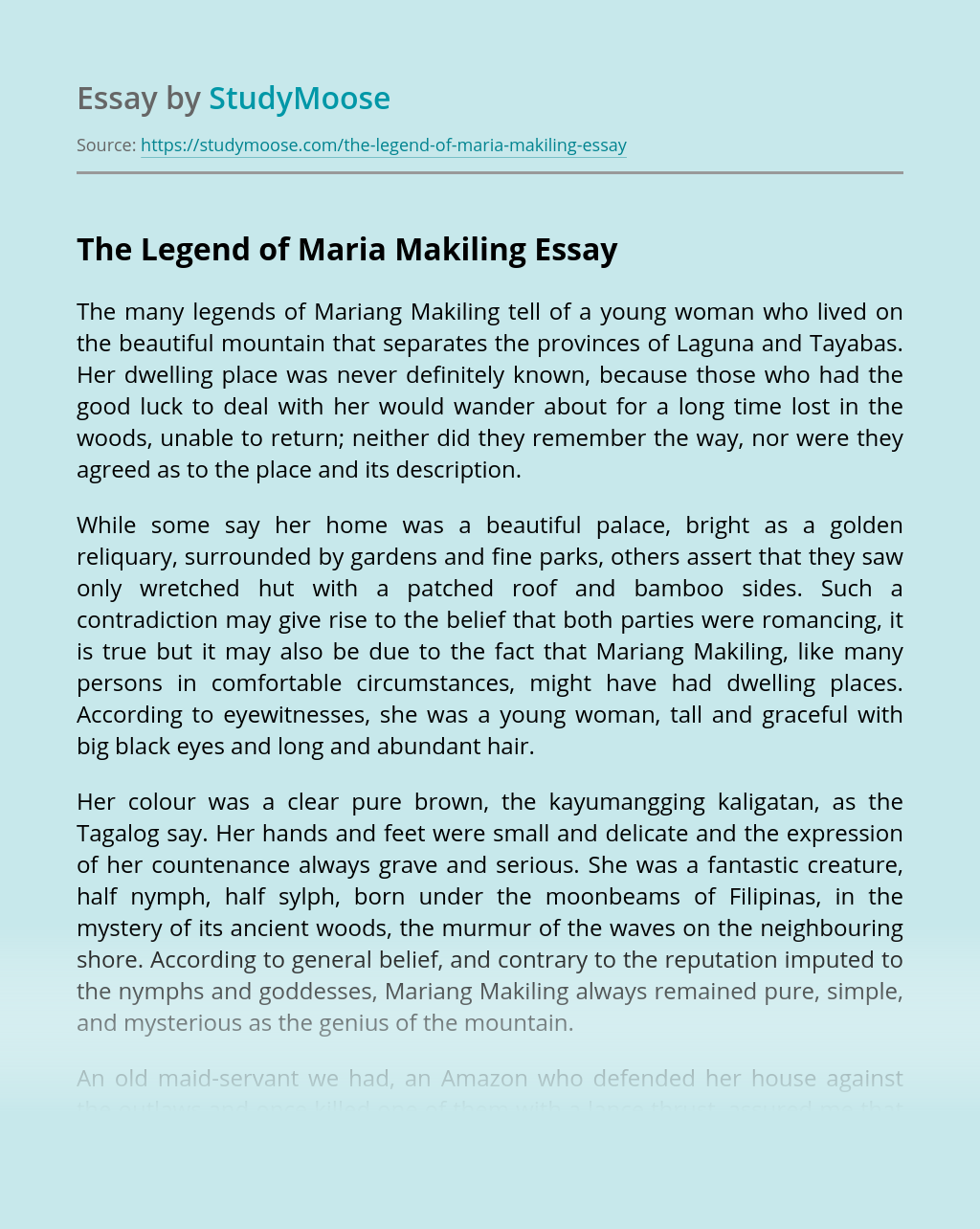 The Legend of Maria Makiling

Rate this post The many legends of Mariang Makiling tell of a young woman who lived on the beautiful mountain that separates the provinces of Laguna and Tayabas. Her dwelling place was never definitely known, because those who had the good luck to deal with her would wander about for a long time lost in...

Get Essay
The Pirate’s Legend

Rate this post It is a well-known fact that piracy is rather romanticized nowadays, however according historic kept in mind pirates always intimidated the world’s seas killing innocent individuals and robbing wealthy merchants. In fact, pirates were the only guys people were afraid of so much. Individuals intimidating the seas were called pirates, privateers and...

A close reading of Beowulf

Rate this post The epic poem Beowulf contains contradictions about the heroic character of the protagonist Beowulf. Two certain passages in Beowulf, one at the beginning of the text and one near the end, offer evidence of inconsistencies within Beowulf’s character. We must ask one question of the poem’s protagonist: Is he really the hero...

The Legend of Sleepy Hollow

Rate this post The lead character of the story, Ichabod Crane is faced with the scary legend of The Headless Horseman upon meeting with Brom Bones, his rival with Katrina Van Tassel. The audience is also provided with a reasonable school teacher dealing with a famous creativity. This paradox could be determined as one of...