The lesson of forgiveness and redemption come hand and hand, in order to be fully forgiven you have to redeem yourself. For some it takes years to master this lesson of maturity and growth, while for others it takes a lifetime. The book “The Kite Runner” by Khaled Hosseini is a great example of forgiveness and redemption. It shows Amir’s journey from a boy to a man by learning to forgive and redeem his relationships with his Baba, closest friend, Hassan and himself.

Don’t waste time
Get a verified expert to help you with “The Kite Runner” Forgiveness and Redemption Theme
Hire verified expert
$35.80 for a 2-page paper

Growing up behind a powerful and well respected father, it becomes hard to live up to his standards. As a child Amir longed for his father’s affection and forgiveness for taking his mother’s life after giving birth to him. ”Then I’d bring it home and show Baba. Show him once and for all that his son was worthy. Then maybe my life as a ghost in this house would finally be over.” Pg (56) Amir knew he had to do something courageous and honorable to earn his father’s forgiveness, he had to win the upcoming kite tournament.

Amir felt by winning the kite tournament Baba would finally see him in a better light. He wanted to make Baba so proud that’ll he’d forget about the disappointments he has brought. “All I saw was the blue kite. All I smelled was victory. Salvation. Redemption.” Pg (65) Redemption at last. Amir was right, Baba was finally proud. Together they began to do more activities, Baba even began calling him Amir Jan.

But the closer they became the farther him and his closest friend, Hassan, grew apart.

Amir and Hassan were inseparable growing up. Minus the fact Hassan was Amir’s servant, both loved and trusted one other. “For you a thousand times over,” he said. Then he smiled his Hassan smile and disappeared around the corner.” (67) Hassan was willing to do anything for Amir, a thousand times over, but was Amir willing to do the same? No, the following night he earned his father’s redemption was the same night he betrayed his closest friend. Watching Hassan being raped and doing nothing about it weighed heavy on Amir.

Their relationship changed that day. They no longer talked, played or flu kites together. They became complete strangers with memories, memories too painful to for Amir to think about because he knew he had to redeem himself, not only to Hassan but to himself. His reason for coming back to Kabul. “And I dream someday you will return to Kabul to revisit the land of our childhood. If you do you will find an old faithful friend waiting for you.” (218) Before Hassan had passed he forgave Amir. “For you a thousand times over.” (Amir, 371) By taking in Hassan’s son and earning his trust Amir had redeemed himself. He no longer had a weight on his shoulders, he had complete happiness.

Amir’s journey to redemption took years but in the process it showed how much he matured over the time. He learned to forgive and he redeemed his name and pride. 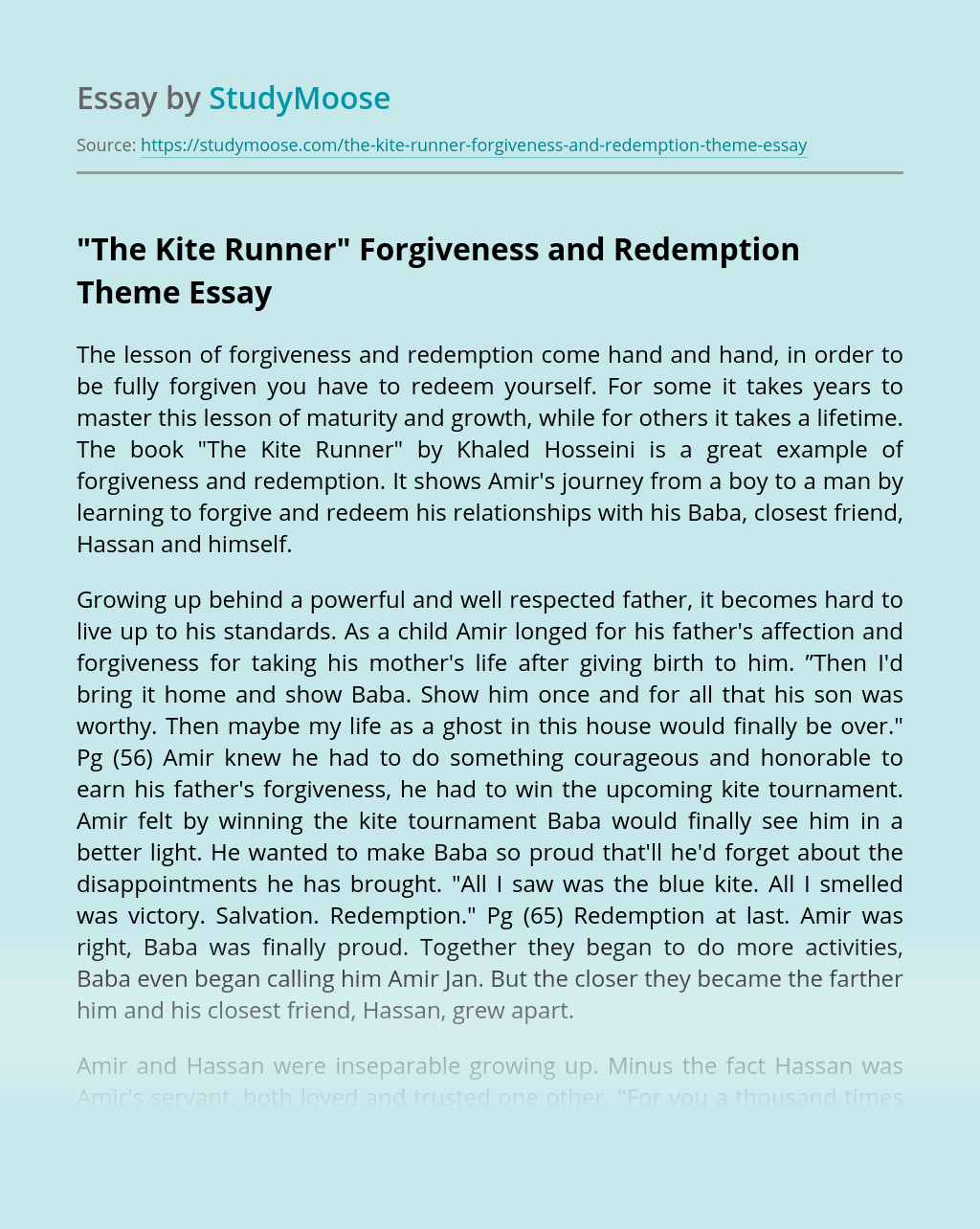 Don’t waste time
Get a verified expert to help you with “The Kite Runner” Forgiveness and Redemption Theme
Hire verified expert
$35.80 for a 2-page paper
Stay Safe, Stay Original