The Key to Success in "The fly" by Mai Vo-Dinh

Intelligence can be interpreted in many different ways, whether it is in school, work, or at home. Cleverness can be used to solve a problem or a crisis. Mai Vo-Dinh, in her story “The fly” uses a young boy to represent perspicacity. The young boy uses that perspicacity to get out of a crisis. He utilizes this intelligence to trick a rich man which results in resolving his family’s problem.

The young boy’s intelligence is made use of in many different ways in order to fool the rich man.

Turn in your highest-quality paper
Get a qualified writer to help you with
“ The Key to Success in “The fly” by Mai Vo-Dinh ”
Get high-quality paper
NEW! AI matching with writer

The boy demonstrates his strongest attribute by deceiving the rich man by making him blurt out that “the fly was not on my nose; he was on the housepole” (106).

When he mentioned that in court, it clarified that he had made a promise to the young boy. The peasant couple does not pay off any debt to any further extent because the boy ended up deceiving the old man into saying that he made a promise.

He illustrates his astuteness by accepting the promise because he knew he could figure something out at the right time “A fly is a good enough witness for me” (105). If there was no promise accepted, the peasant couple would still have to pay off their debt to the old man. His intelligence was utilized in many ways like confusing the rich man, tricking him into admitting that he made a promise, and accepting the promise from him.

The rich man was fooled by the child several times, which leads to solving his dilemma of paying off a debt. The intelligence of the boy saves the whole family, financially by scamming the old man in many ways. The young boy uses his sharpness to figure out a way to get out of this crisis by tricking the rich man.

The Key to Success in "The fly" by Mai Vo-Dinh. (2016, Jul 22). Retrieved from https://studymoose.com/the-key-to-success-in-the-fly-by-mai-vo-dinh-essay 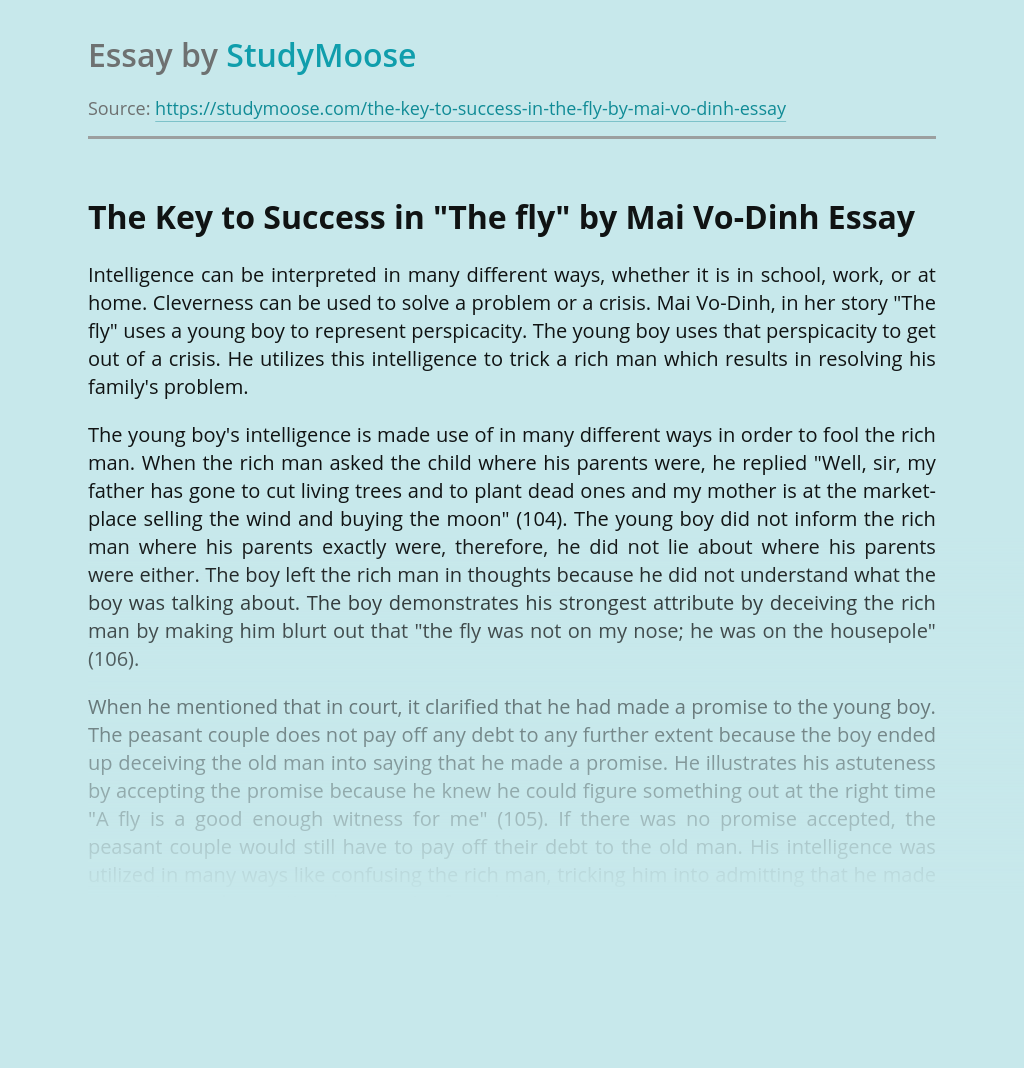 Turn in your highest-quality paper
Get a qualified writer to help you with
“ The Key to Success in “The fly” by Mai Vo-Dinh ”
Get high-quality paper
Helping students since 2015
Stay Safe, Stay Original