Between 1941-1945, Philippine Literature was interrupted in its development when the Philippines was again conquered by another foreign country, Japan. Philippine literature in English came to a halt. Except for the TRIBUNE and the PHILIPPINE REVIEW, almost all newspapers in English were stopped by the Japanese. This had an advantageous effect on Filipino Literature, which experienced renewed attention because writers in English turned to writing in Filipino. Juan Laya, who uses to write in English, turned to Filipino because of the strict prohibitions of the Japanese regarding any writing in English.

The weekly LIWAYWAY was placed under strict surveillance until it was managed by Japanese named Ishiwara. In other words, Filipino literature was given a break during this period. Many wrote plays, poems, short stories, etc. Topics and themes were often about life in the provinces.

A. FILIPINO POETRY DURING THIS PERIOD

The common theme of most poems during the Japanese occupation was nationalism, country, love, and life in the barrios, faith, religion and the arts.

Three types of poems emerged during this period. They were: 1. Haiku – a poem of free verse that the Japanese like. It was made up of 17 syllables divided into three lines. The first line had 5 syllables, the second, 7 syllables, and the third, five. The Haiku is allegorical in meaning, is short and covers a wide scope in meaning. 2. Tanaga – like the Haiku, is short but it had measure and rhyme. Each line had 17 syllables and it’s also allegorical in meaning. 3. Karaniwang Anyo (Usual Form) – like those mentioned earlier in the beginning chapters of this book.

B. FILIPINO DRAMA DURING THE JAPANESE PERIOD

The drama experienced a lull during the Japanese period because movie houses showing American films were closed. The big movie houses were just made to show stage shows. Many of the plays were reproductions of English plays to Tagalog. The translators were Francisco Soc Rodrigo, Alberto Concio, and Narciso Pimentel. They also founded the organization of Filipino players named Dramatic Philippines. A few of playwriters were: 1. Jose Ma. Hernandez – wrote PANDAY PIRA

C. THE FILIPINO SHORT STORY DURING THE JAPANESE PERIOD

The field of the short story widened during the Japanese Occupation. Many wrote short stories. Among them were: BrigidoBatungbakal, Macario Pineda, Serafin Guinigindo, Liwayway Arceo, Narciso Ramos, NVM Gonzales, Alicia Lopez Lim, Ligaya Perez, and Gloria Guzman.The best writings in 1945 were selected by a group of judges composed of Francisco Icasiano, Jose Esperanza Cruz, Antonio Rosales, Clodualdo del Mundo and Teodoro Santos. As a result of this selection, the following got the first three prizes: First Prize: Narciso Reyes with his LUPANG TINUBUAN

Because of the strict prohibitions imposed b the Japanese in the writing and publishing of works in English, Philippine literature in English experienced a dark period. The few who dared to write did so for their bread and butter or for propaganda. Writings that came out during this period were journalistic in nature. Writers felt suppressed but slowly, the spirit of nationalism started to seep into their consciousness. While some continued to write, the majority waited for a better climate to publish their works. Note worthy writer of the period was Carlos P. Romulo who won the Pulitzer Prize for his bestsellers I SAW THE FALL OF THE PHILIPPINES, I SEE THE PHILIPPINES RISE and his MOTHER AMERICA AND MY BROTHER AMERICANS. Journalists include Salvador P. Lopez, Leon Ma. Geurrero, Raul Manglapuz and Carlos Bulosan.Nick Joaquin produced THE WOMAN WHO LOOKED LIKE LAZARUS. Fred Ruiz Castro wrote a few poems.

F.B. Icasino wrote essays in The Philippine Review.Carlos Bulosan’s works included THE LAUGHTER OF MY FATHER (1944), THE VOICE OF BATAAN, 1943, SIX FILIPINO POETS, 1942, among others. Alfredo Litiatco published With Harp and Sling and in 1943, Jose P. Laurel published Forces that Make a Nation Great. The Commonwealth Literary Awards gave prizes to meritorious writers. Those who won were: 1. LIKE THE MOLAVE – by Rafael Zulueta da Costa (Poetry) 2. HOW MY BROTHER LEON BROUGTH HOME A WIFE – by Manuel E. Arguilla (Short Story) 3. LITERATURE AND SOCIETY – by Salvador P. Lopez (Essay)

4. HIS NATIVE SOIL – by Juan Laya (Novel) President Manuel L. Quezon’s autobiography THE GOOD FIGHT was published posthumously. Radio broadcasts echoed the mingled fear and doubts in the hearts of the people.Other writers of this period were Juan Collas (19440, Tomas Confesor (1945), Roman A. de la Cruz and Elisa Tabuñar. 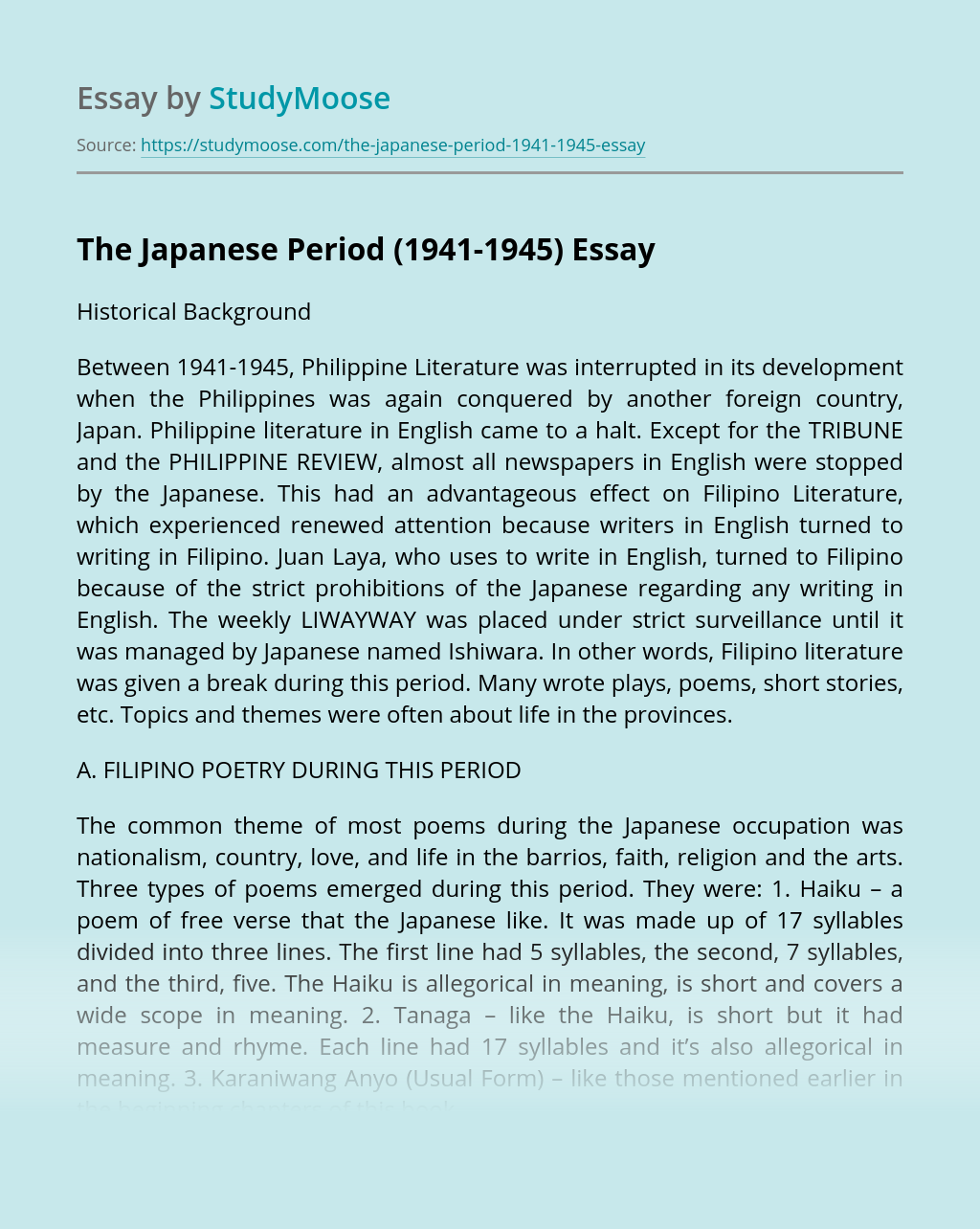 Summary the Period of Imitation 1919 – UP College Folio 1920 – Bulletin, Philippine Herald 1924 – The Philippine Review, the Independent, Rising Philippines and Citizens, and the Philippine Education Magazine. By 1919, the UP College Folio published the literary compositions of the first Filipino writers in English. They were the pioneers in short story...

William Faulkner’s Nobel Prize acceptance speech has been widely renowned as one of the most famous speeches of all time. Faulkner says that writing has become powerless during this modern era. He says that more modern writers write “not of the heart but of the glands.” The glands are less significant than the heart in...

Last Christmas, I spent 5 fun-filled days and 4 magical nights in Disneyland. Daily weather in Anaheim was beautiful. The driveway leading to the park entrance was lined with tall palm trees as they stretched to the heavens in the blazing sunshine. Everyone’s face shone with joy and the children shook their parent’s hands from...

Nora’s first job is an opening of a short story from an annual that has been published for girls. As the story is in a book that is aimed at girls. The language and the writing style would have been created to make the book easier to read for the audience. The writer would have...

A Gap of Sky Written by Anna Hope

How we form and structure our life is self-elected. We have the freedom to make our own decisions. We may swim with the current but we follow it in our own personal way. We are all dealing with personal issues which some times make our life a living hell. Opposition sometimes turns life into one...

In this essay Judy Brady dives into the negative stigmas of being a wife in a society that didn’t really allow women to do much, and didn’t give women the power that men did during this time, compared to this day-and-age. In the U.S. during the 1960’s, the second wave of the feminist movement was...