In August of 1945, the United States launched two atomic bombs on Japan; the first, in Hiroshima on August 6, and the second in Nagasaki a few days later. Despite the obvious diplomatic advantage to implementing one of the most intimidating weapons of that time, the United States’ tactics and goals behind dropping the atomic bombs were purely military oriented; the political benefit was merely an added bonus. The atomic bomb was necessary due to the Japanese’s refusal to surrender and the hundreds of thousands of lives at stake.

Don't use plagiarized sources.
Get Your Custom Essay on DBQ Atomic Bomb Just from $13,9/Page

Although there were attempts at peace, Japan showed no signs of agreement towards a peaceful and unconditional surrender. Japan’s reluctance to stop fighting could have left to months more of fighting and thousands of more deaths.

The atomic bomb ensured an enormous display that could quickly end the war. As Cuhrchill proclaimed, “the end of the Japanese war no longer depended upon the pouring in of their armies for the final and perhaps protracted slaughter… this nightmare picture [has] vanished… in its place the vision of the end of the whole war in one or two violent shocks” (Doc E).

Churchill summed up the gist of America’s reasoning for implementing the bombs. The United States did not have to depend on the slaughter of millions of people in bloody, messy fights, and , instead, “a speedy end to the Second World War” could be reached with one machine (Doc E). However, once the first bomb was dropped on Hiroshima, the Japanese continued to resist. It wasn’t until a second bomb was dropped that Japan surrendered with a simple stipulation that their emperor remain in his position.

This alone proves the military necessity of the bombs. Despite the attack on Hiroshima, Japanese still wished to continue their war. If not for the second bomb, who know how many lives would have been lost. In Document B, General H. H. Arnold mentions that, even before the atomic bombs were dropped, Japan was already in a state of disarray and on the verge of collapse (Doc B). His argument was that Japan would not have lasted much longer and would not have been able to “carry on a large-scale war” (Doc B). However, despite this, the Japanese refused to surrender, and, though they may have been on the verge of a complete depletion of supplies and resources, there is no way to determine how long Japan could have or would have continued fighting. This could have meant months more of fighting and Americans dying. As of July 1945, the Japanese army surmounted to over 5 million men (Doc A). Had the Japanese not surrendered- which they showed no inclination towards doing so until after Nagasaki was bombed- Americans, and possibly the Soviets, would have been “faced with the enormous task of destroying an armed force of 5 million men” in unfamiliar terrain with 5 thousand suicide bombers overhead (Doc A). According to Henry Stimson, if the United States had continued with their original plans, – a combination of naval blockades and land invasions- the war could have lasted until “the latter part of 1946” (Doc A).

The atomic bombs obviously affected diplomatic relations after implemented, but, despite the obvious benefits, the United State needed this advantage of nuclear weapons to win the war. Had the bombs not been implemented, Japan would not have surrender so quickly and peacefully, and hundreds of thousands of lives could have been lost in the fight for peace. Had the United States not come out with the bomb, Germany would have undoubtedly discovered it, and the results of Germany using the bomb would have been much more devastating than the results of America’s excursions. The bombs were definitely a military strategy to win the war and any diplomatic advantage was simply an added benefit that ensured future peace. 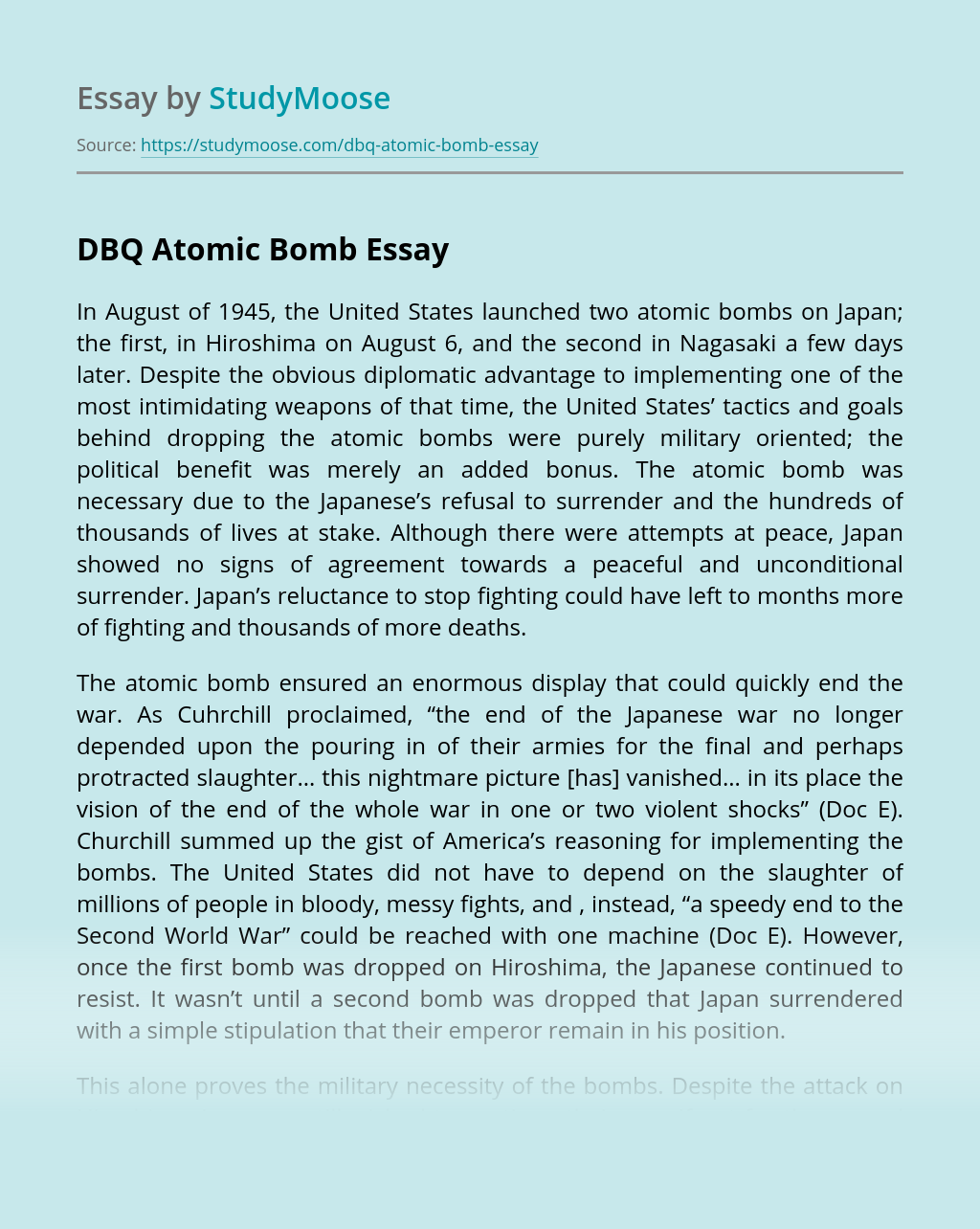 Throughout the history of criminological thought, various theories on crime causation have been formulated and many questions as to why individuals commit crime still remain unanswered. This essay will focus on psychological and sociological theories in relation to criminological matters. Criminology the study of crime in society arose from sociology and psychology in the late...

Analysis/Commentary of Minerva Quote 3-4 sentences 1. Quote: “I pictured myself on a hot day falling, slowly and deeply, into those cold layers of water. I held on tight to my sister’s hands, no longer afraid of anything but that she might let go.”(Alvarez 39). Inference: I think Minerva has trust issues andlikes summer because...

Get Essay
Narrative essay: Moving on

It was the day of my graduation and the alarm clocks, spread across the dorm room, awoke me from my sleep. I rolled over to the other side of my twin sized bed to get a glance out the window. The suns radiance became too strong for my sleepy eyes. Ring! Ring! Ring! Anna’s alarm...

“A man who waits to believe in action before acting is anything you like, but he is not a man of action. It is as if a tennis player before returning the ball stopped to think about his views of the physical and mental advantages of tennis. You must act as you breathe.” – Georges...

Electric car is basically a type of automobile which uses electric motor rather than a gasoline engine for impulsion or forward motion, while these cars are basically the automobiles power-driven by electricity and is used by the people for transportation purpose. Different type of onboard battery packs are used for providing power to these electric...