The fourteenth and fifteenth centuries Italian thinkers and atres thought a thousand years has passed since the fall of the roman empire. They contrast this from their own time of thinking and enlightenment or the renaissance. Later everyone accepts this name as a convent label of this time period. The Italian renaissance focused on ancient greece and roman literature and put focus on human life and the end of it. Scholar search monasteries for ancient roman and greece literature to translate it to latin.

Don't use plagiarized sources. Get your custom essay on
“ The Italian Renaissance and the Northern Renaissance ”
Get custom paper
NEW! smart matching with writer

Artist and sculptures uses a gothic style of art which puts everything in a realistic style of art and architure. Before most artist uses a byzantine style of art that makes everything flat rigidity formalized format of art. Giotto, one of the first artist who uses a style that captures the object with emotion and makes it a three dimensional style of painting. By doing so he observed a world with unbelievable human beings with great emotion.

As such he created a new era of history where art can express the religiosity of his own religious people. Until he died in 1338 where his only his inventions were remembered and his spirit and compassion were lossed.

In the period of when he died to the start of the fourteenth century, a new artist Florentine Masaccio (1401-1428) went to complete the technique of Giotto though few of his work has survived. Though in the few that did survived he did mastered the perspective, naturalism of flesh and bone, and the modeling of figures in light and shade of the human body.

In later years many artists constantly tried to improve the late Masaccio’s work. This has seen an increase in realism in paintings, like the painters Andrea Mantegna (1431-1506) and Piero della Francesca (1420-1492). Mantegna’s painting is of Christ being dead on a marble slab that shows the entirety of his research and reautle of his long study. However Francesca’s approach to painting was scientific and intellectual that he ignored the flow of the art. Using mathematics the painting of Constantine’s mother Helena discovering the cross used for Christ’s crucifixion looks like it was carved on stone instead of being painted. His way of painting is the prefix of abstract painting today.

In the start of the fifteenth century the northern renaissance used Christian sources to base their enlightenment off of. The art focused more on simple subjects like dinner. The artists used and adapted ideas from the Italian renaissance to improve tequents and improving culture or life. Albrecht Dürer, a German painter and printmaker, once said “the new art must be based upon science.”. Unlike the Italians, the northern renaissance continued to make most of their art of of religion with flat perspective, stylized figures, and delicate and light backdrops mostly about everyday people and what they normally do. They also had an newfound appreciation for realism in their work. Instead of using a type of paint that dries fast, so most if not all artist used oil paint to get the level of realism and detail they want it also allowed them to blend the paint to colors that they need. However painting wasn’t the only way to captured images as printing have been used to create many things like playing cards, books, and engraving that could be printed in newspaper. They both focus on religion.

During all of this a man named Martin Luther wasn’t happy with the church for their way of being paid to forgive people’s sin so he made his own religion called the lutherans. He also translated and printed the bible to give to everyone that spread many different branches of Christianity.

The northern renaissance affect many other countries then the Italian renaissance such as Germany, France, England, the Netherlands, and Poland. While some areas had strong connection with certain aspects of the northern renaissance Germany and Italy were mostly broken into city-states while parts of western Europe began to emerge as nations. Though the northern renaissance was closely linked to the protestant reformation this led to some conflict with the Roman Catholic church. Later some artist begane to look towards Italy for inspiration on their work they began to be known as “Romanist”.

Both renaissance has their own unique differences, but what is most agreeable is that they both produce and inspired many paintings and artist for being so short at thirty five years. They both had technological advances such as gunpowder, the compass and the printing press with paper. Both the renaissance were base of classicism and humanism. Both had came out of what was called the “Dark Ages” or a period where nothing was achieved but war and death until the bubonic plague deathwise. Old languages that can only be read by smart people or as smart as you can get at the time like monks became translated and printed so that it was able to be read by everyone for a cheap price, around one eighth of what it was worth before the printing press. They were both a period of enlightenment for everyone; it’s a shame that it can’t be said today unless people would shut up and focus in class they would actually learn something that might help or not make it so annoying/distracting for others to pay attention. 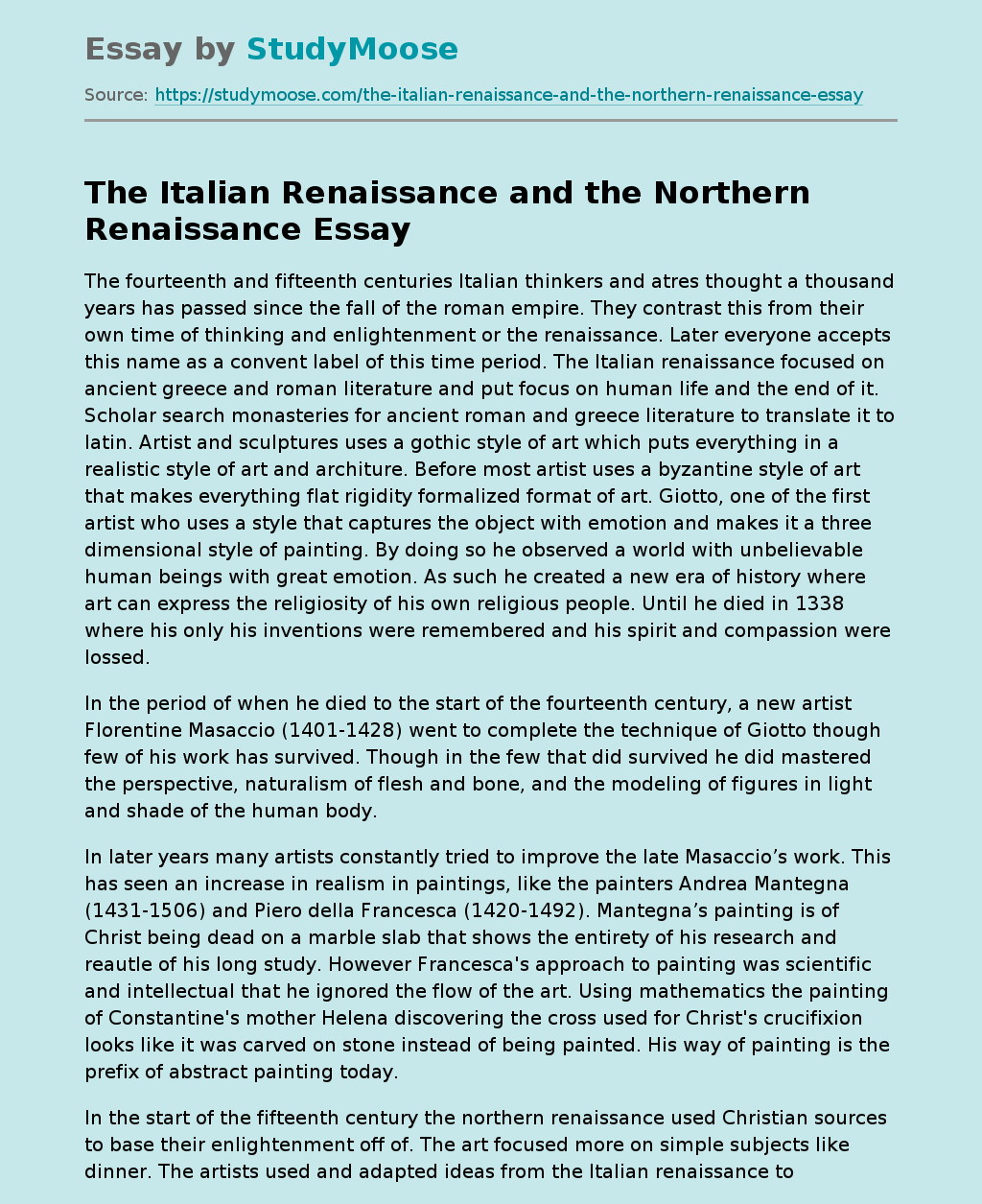