There are 200 episodes of Teen Mom and 16 and Pregnant combined, with up to 2 million viewers per episode. The reality television show goes through the life of teenage mothers and their pregnancy. The teenage mothers express their mindset of being a young mother and insights on their lives. Lauren Dolgen, the creator of 16 and pregnant, wrote an article on Cable News Network sharing why she created the series. She says that her intention for creating the series was to share “cautionary tales about the consequences of unprotected sex, and the reality of becoming a parent too early.

Don't use plagiarized sources. Get your custom essay on
“ The Influence of Teenage Pregnancy Reality Shows  ”
Get custom paper
NEW! smart matching with writer

The media has an effect on people of all ages, but mainly teenagers and children. Media and technology is what the teenagers this generation grew up in and this is the type of society that they are a part of.

The media can easily change the opinions of the viewer. Jennifer Stevens Aubrey, from the Department of Communication at the University of Arizona, conducted a study on Understanding the Effects of MTV’s 16 and Pregnant on Adolescent Girls’ Beliefs, Attitudes, and Behavioral Intentions Towards Teen Pregnancy. She explained how the social cognitive theory worked, and how viewers develop a connection with characters of media through homophily and parasocial interaction (Aubrey 3). The social cognitive theory is a theory that claims observing others has an effect on a person’s actions.

She defines homophily as “the degree to which viewers perceive themselves to be like the characters in terms of traits, abilities, and backgrounds,” and parasocial interaction is “when the viewer perceives a relationship of friendship with a media personality based on affective ties with that persona” (Aubrey 3). Aubrey goes into more detail on how the social cognitive theory works with the viewers watching. The connection a viewer has with the media has an effect on how they relate the situation to their life. If they see the person in the program not having a positive experience with being a teenage mother, the audience is discouraged to have an infant at this age. Some people may say that the media does not affect the way people may think in the real world. That these productions are purely for entertainment. Melissa Kearney and Phillip Levine from the National Bureau of Economic Research studied, The impact of MTV’s 16 and Pregnant on Teen Childbearing. They state that the entertainment media references 16 and Pregnant as a hit show based off of Nielsen Television ratings (Kearney and Levine 10). Aubrey supports this point as well by saying 16 and Pregnant is the most, “highly rated cable show among female viewers 12–34 years of age in 2010.” High ratings indicate that the series attracts lots of viewers because of its entertaining qualities. The series does have to be entertaining for it to succeed in the television industry, but it is not only entertainment, its educational aspects are as deliberate as the entertainment aspects. “16 and Pregnant may be conceptualized as an entertainment-education program, as it seeks to entertain and educate its target audience” (Aubrey 2). The show is intentionally made for audiences to obtain a look into the mothers’ lives as a way to learn about teenage pregnancy. An example of an educational moment in the show is when, “Three-quarters of the girls (36 of 47) report not using any form of contraception at the time they got pregnant” (Kearney and Levine 9). The production is demonstrating the effect of not using birth control showing a first-hand experience for the young audience to learn from. The show is both entertaining and educational, making it a way to have an effect on teenagers to discourage teenage pregnancy. The program may be interesting to audiences because it is a reality television show that is filled with a great deal of drama.

The series illustrates the hardships of being pregnant and a mother at such a young age. “Just over half (24 out of 44) of the relationships between the girl and her boyfriend either collapsed or were very strained by the end of the episode” (Kearney and Levine 9). This is an example of how the real life of a teenage mother’s relationship with the father. Eliana Dockterman, a writer for Time Magazine that focuses on women’s issues, explained how the mothers,“fight with the fathers of their children (many of whom have now left them), fight with their parents (who are usually supporting them), struggle financially, struggle to finish their degree and watch their friends enjoy prom and college without them.” The production is filled with drama and undesirable lifestyles for a young adult. These instances have a negative impact on a teenager’s opinion towards being a young parent persuading them not to get pregnant at this age. By bringing attention through the mass media of teenage pregnancy, 16 and Pregnant and Teen Mom may be seen to glamorize teenage pregnancy. It may seem glamorized due to the fact that teenagers crave the fame that can come with the series. Most of the mothers featured on the shows become celebrities and role models to teenage girls (Dockterman). Since the series is a famous, well-known show, it may seem it is glamorized, but observing an actual episode, it reveals drama and an undesirable life style. Even if the production is glamorized, which it is not, then most the audience will realize that the series is slightly unrealistic and know the show is not promoting teenage pregnancy. In the study Kearney and Levine did with teenagers,“82 percent of teens who report watching 16 and Pregnant indicate that it “helps teens better understand the challenges of pregnancy and parenthood.” Only 17 percent report that it “glamorizes teen pregnancy’.” Establishing the struggles of being a young mother affects the overall rates of teenage pregnancy.

The series, 16 and Pregnant and Teen Mom, influence its viewers to not have to deal with being pregnant and caring for an infant as a teenager. Media is able to have a substantial impact on the life of the audience. The production displays an unwanted lifestyle for a young adult. With the media playing such an important role in teenagers’ opinions, it has been able to have a positive effect on the rate of teenage pregnancy. The media has a major effect on influencing the viewers, but should not always affect morals and opinions on significant life-changing choices people may make. With over half a billion views of the series, 16 and Pregnant and Teen Mom are making an impact on how people may view teenage pregnancy. 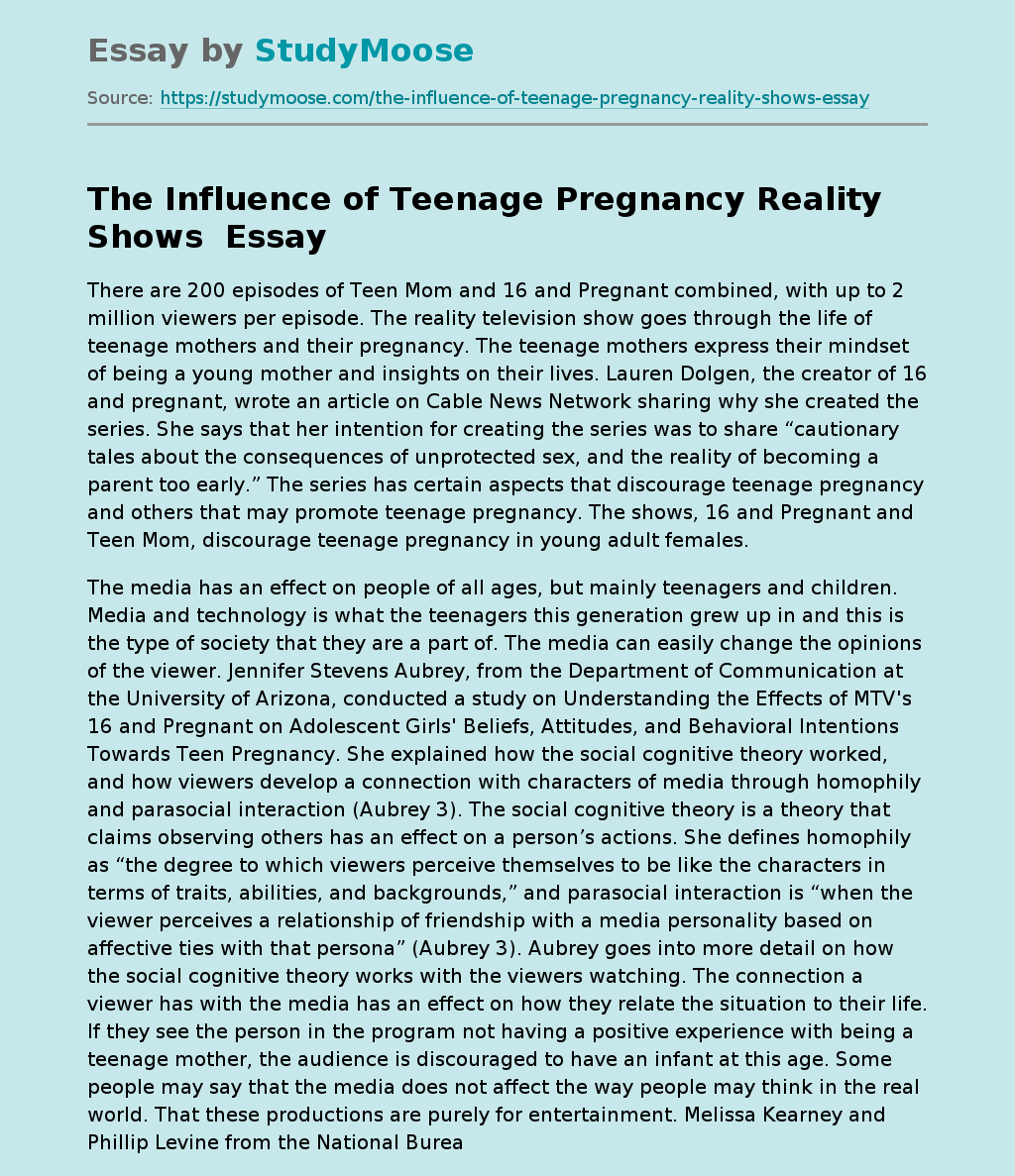