The Influence of Media on Body Image and Eating Disorders

Mass media has a tremendous effect on children and adolescent’s lives, whether it includes, new fashion trends, premiering movies or social media. One of the powers is how women perceive their bodies. Movie stars and models feel pressured to catch attention and consistently appear attractive in order to maintain their career. Many individuals judge how someone looks based on their body composition. The outcome of this judgement is that Hollywood is “getting skinny”. Considering several models and actresses serve as role models for children, they will frequently want to appear like them.

Don't use plagiarized sources. Get your custom essay on
“ The Influence of Media on Body Image and Eating Disorders ”
Get custom paper
NEW! smart matching with writer

This seemingly harmless behavior can cause decreases in body satisfaction, self-esteem and can cause increases in eating disorders among children and adolescents in order to maintain a slimming appearance.

According to The American Psychological Association, eating disorders can be defined by “abnormal eating habits that can threaten your health or even your life” (American Psychological Association, 2018). There are three major subdivisions that eating disorders mainly fall into. Anorexia Nervosa is the when individuals restrict their intake of food to the point of starvation.

Bulimia nervosa is when individuals eat large amounts of food and then purge by making themselves vomit or by taking a laxative repeatedly. Binge eating is when individuals have uncontrollable eating habits, however do not make themselves vomit (American Psychological Association, 2018). All three of these disorders can be damaging to one’s health. And when one’s disorder goes untreated, may result in long term effects or death.

Heinberg, Thompson, and Stormer (1995) conducted one of the first studies regarding the effects of sociocultural pressures of woman to be thin and attractive.

They studied how these attitudes and behaviors became part of one’s learning and unconscious mind. The study was named “The Sociocultural Attitudes Towards Appearance Questionnaire or SATAQ. The study measured one’s understanding of socially presented views concerning the significance of attractiveness in society. Subjects responded to a questionnaire that included scenarios where one had to answer on a scale of one to five based on if they completely disagree to completely agree. An additional study was conducted to test the results of the SATAQ with ranges of body image distortion and eating disorders. The questionnaire contained questions surrounding the ideas of self-esteem, physical appearance, body image and eating patterns. It was concluded that the SATAQ did directly correlate to the later tests given. Children and adolescents are very likely to incorporate social views regarding appearance into their own views. This cause is a key source of body dissatisfaction and eating disturbances among groups of children and adolescents (Heinberg et al., 1995).

The research performed by Heinberg et al. (1995) influenced a second study many years later to again visit the sociocultural pressures the media carries, as well as eating patterns. With the internet and social media sites exploding the past few years, Pederson, Hicks and Rosenrauch (2018) examined how mass media now affects the lives of children and adolescents. The study was started by gathering several statistics of the participants such as; gender, age, average time watching television, average number of magazines read weekly and average time spent on social media sites. The study was related to Heinberg et al. (1995) in that both were questionnaires assessing how one was concerned with their body shape. “The Body Shape Questionnaire” contained a series of questions that asked participants to answer “do you feel fat” on a point scale of one to five. The answers were then used to calculate how likely the individual was to develop eating disorder symptoms (Pederson et al., 2018). , The results revealed clear evidence that there is a significant relationship between the desire for a thin body and society pressures. The results concluded that when one is forced to read, watch, and listen to famous people continuously, one will develop unrealistic, stereotypical, and restricting opinions which promotes increased body dissatisfaction and dieting. (Pederson et al., 2018). The results were again very similar to Heinberg et al. (1995). This can conclude that mass media still is very influential to children and adolescent lives, because they generate equivalent results years later.

Change is one entity children and adolescents struggle to move towards throughout their life. When one is unhappy with their body mass, they will pursue change within themselves. But when one is told they are “fixed” or incapable of change, may partake a role on how they identify with themselves. This is what Arciszewskia, Berjot and Finez (2012) began to study. The study examined the relationship between the perception of what an attractive body entailed with the belief of how “malleable” one’s body was on a perceived image, ideal image and correct image. Each participant was asked to have a picture taken of themselves, which later was used in a computer program. Contributors used the program to increase or decrease the shape of their body in reply to questions about their actual, ideal and correct body composition. Two groups were made among participants. The first one were told their bodies were malleable and able to change and read an article discussing the topic. The second group were told their bodies were fixed and were not able to change and also read an article discussing fixed bodies.

Results conveyed that woman who were told their bodies were malleable, were not affected when shown threatening model images. Woman in the fixed group were affected and wanted themselves to be extremely thinner. In addition, both groups answered the question “do you want to diet regularly”. More participants in the malleable than fixed group said yes. A seemingly normal diet, may alter into distorted eating patterns later on (Arciszewskia et al., 2012). This study compares to Heinberg et al. (1995) research, as well as Pederson et al. (2018) study. In all three studies, the association between body image and mass media were explored. There is a strong direct correlation between the variables. From a very young age magazines, television shows, billboards and social media sites have been shoved in our faces 24/7. It is nearly impossible to not look at them in today’s society. With that notion in mind, if our whole lives we are brought up staring at thin ideal bodies, it is easy to explain why many individuals think everyone must look similar to them.

Although many individuals are influenced by famous models and actresses, we are also very influenced by our peers and the people we directly encounter on an everyday basis. In a study by Clark, Tiggemann and Markia (2008), evaluates how peers around us influence body image and distortion. A group of young girls, age 9-12 years old were brought in and given a series of questions. Some questions given were, “My friends talk about how important it is to be nice-looking” or “I buy my clothes based on what my friend’s wear”. The people surrounding us are the most influential people in our lives. Children and adolescents are always looking for acceptance and reassurance from others. Evidence was found that the majority of participants claimed they ask their peers a lot about their physical appearance and wardrobe selection. (Clark et al., 2008).

One of the most culturally influential icons for female beauty among adolescents is Barbie. For young children playing and creating fantasies are essential. This stage is when children internalize and construct their own values. The research performed by Dittmar and Halliwell (2006), examined the ramifications Barbie has on body image in young female children. The participants were broken down into three groups. The first group were exposed to Barbie dolls, the second group were shown Emme dolls and the third group saw neutral images. After the participants viewed the images, their body image concerns were measured. The girls picked images they thought represented their own body shape, the body shape they ideally wanted and what they thought the ideal adult woman look likes. The outcome showed that the girls exposed to Barbie showed the highest level of body dissatisfaction. On the other hand, the dissatisfaction rate among Emme dolls exposure and neutral images were the same. Therefore, this can conclude that girls still can be exposed to dolls without it having a negative correlation (Dittmar & Halliwell, 2006).

Barbie dolls symbolize a distorted thin body ideal. Excessive expose to Barbie’s at a young age can have detrimental effects on body image and self-esteem. These effects can lead to unhealthy eating habits, which can lead to developing eating disorders. When one possesses an inaccurate image about what a woman should look like at a young age, also combined with the effects of mass media, increasingly has a damaging effect on the mental health of themselves. Clark et al. (2008) study likewise explains similar results. Both studies begin to examine how body image difficulties start at a young age. In numerous circumstances, undeveloped children are not reading magazines with models or scrolling through social media sites. The brain of a young child is continuously evolving because of the plastically of it. Furthermore, learning what an “ideal” woman should look like can affect the child as they begin to compare and contrast themselves to other peers.

Overall, mass media is evidently an influential factor of how an individual perceives their body composition. In all of the studies presented, participants relied heavily on media to create expectations for themselves and others of what an “attractive” woman looks like. The messages presented focus on the significance of a thinness appearance. This value has a negative effect on body satisfaction, eating patterns and emotional welfare of a woman. Research has indicated that media contributes to the growth and continuation of eating disorders among individuals. Professionals and the community should promote more encouraging and self-esteem building messages to be communicated within mass media in order to prevent more eating disorders worldwide.

The Influence of Media on Body Image and Eating Disorders. (2021, Oct 08). Retrieved from http://studymoose.com/the-influence-of-media-on-body-image-and-eating-disorders-essay 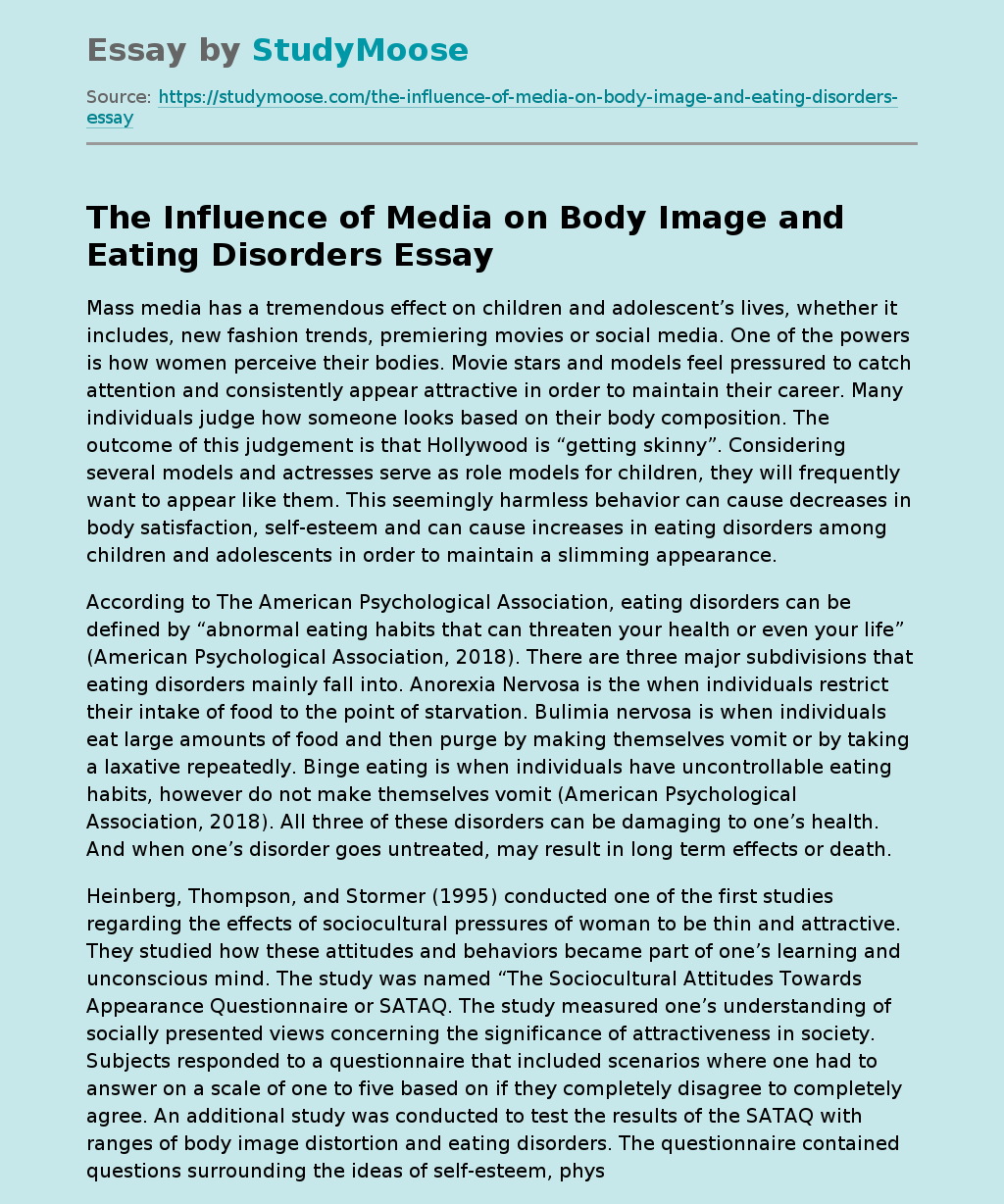