The Inequality of Women in Our World: The Restriction of Their Relationships, Their Job Opportunities, and Their Rights

According to the U.N., more than 10 million girls are forced into marriage annually. This appalling number displays just one problem the female population deals with. Women and girls alike are constantly fighting for fairness and breaking down stereotypes. Many people believe that all women hope to be mothers and think that is the only thing they desire in their adult-life. Surprisingly to some, women can have the main goal of possessing a successful, rewarding career just like a man; nevertheless, many females are oppressed and in many countries women do not have the opportunity to have an occupation other than housewife.

Don't use plagiarized sources. Get your custom essay on
“ The Inequality of Women in Our World: The Restriction of Their Relationships, Their Job Opportunities, and Their Rights ”
Get custom paper
NEW! smart matching with writer

Unfathomably, it is acceptable for girls to be married off at incredibly young ages in Muslim countries; for example, in Iran girls can get/be legally married at age 9 while for boys the legal age of marriage is 14. Young girls getting married is allowable in Muslim countries because of the Prophet Muhammad, who married his favorite wife when she was only six and consummated the marriage when she was only nine. Since Muhammad’s actions are so well thought of in the Islamic culture, an unacceptable norm was created.

Other ways women in primarily Islamic countries are restricted in their relationships are by being denied the right to get divorced with the same ease a man could and often being allowed only one marriage.

However, men are allowed four marriages. In many places not receiving alimony for more than three months after a divorce, and frequently not acquiring custody of their children after divorcing is common for women. In the essay, “The Women of Islam,” the author Lisa Beyer shows a little bit of the inequality that women face when it comes to divorce by saying, “Wives in Islamic societies fare great difficulty in suing for divorce, but husbands can be released from their vows virtually on demand, in some places merely by saying ‘I divorce you’ three times” (92). Women are scared of being forced into poverty and losing their children when divorce comes. This situation pressures the women to stay in unhealthy, unwanted marriages. Second, due to discrimination, women are being paid less than men for doing the same work and are unable to get the same jobs as men due to their sex.

For example, as stated by the World Economic Forum, women hold slightly less than five percent of the CEO positions of the world’s largest employers in the 20 leading economies. This is shocking because women hold over half of the college degrees given. On average women still earn $33,932 less than men annually, 70% of the female salary; this is also surprising considering women are commonly more highly educated than men. Facebook CEO Sheryl Sandberg believes that young women have an “ambition gap” and this explains their failure to be more successful in corporate careers. In her opinion this “ambition gap” is created by society. The author of the article “Women’s Rights” describes Sandberg’s thinking when he or she writes, “She blamed this on societies’ disapproval of female ambition; assertive little girls are often called ‘bossy,’ she observed, but forceful little boys are not” (157). This double standard causes a more challenging environment for girls to have corporate careers and instills an idea in every girl’s brain that they cannot obtain their career goals the same way a man can.

Some people, such as Catherine Hakim, wrongly believe, “Now that legislation has removed barriers to workplace discrimination in such places as the United Kingdom and United States, she contends, women have gone as far as they want in the work world. Feminists had ‘widely exaggerated and unrealistic expectations of how much change would occur,’ Hakim argues. ‘It’s simply not the case that the majority of women want full-time, lifelong, career-centered lives in the same way that men typically do’” (Women’s Rights 157). People like Hakim believe women don’t strive for more than motherhood and while this is true for some, it is not true for all women. Some women want careers just like some men want to be stay-at-home parents. Third, women have less freedom than men because they have fewer rights. In the Muslim religion, daughters get half the inheritance that sons receive, have half of a man’s standing in court when it comes to financial matters, and have half of the value of a man when it comes to murder.

While these facts are unsettling, they are not the worst thing women’s inequality has to offer. Furthermore, one of the sections of the Koran is interpreted to say that men are to watch over women and that men who have disobedient wives are supposed to punish them by making them sleep alone and beating them. Since beating women is never okay, social workers are sent to areas around the world, especially Islamic cultures, to help abused women. Beyer discusses this in her essay “The Women of Islam” when she says, “wife beating is so prevalent in the Muslim world that social workers who assist battered women in Egypt, for example, spend much of their time trying to convince victims that their husbands’ violent acts are unacceptable” (92). The fact that women have to be convinced that their husbands beating them is wrong shows how inequality is ingrained in their minds-often times through religion-as something that is normal. Another way women’s rights are taken away is by female circumcision or female genital mutilation.

According to Beyer, this procedure “involves removing part or all of a girl’s clitoris and labia in an effort to reduce female sexual desire and thereby preserve chastity” (93). This act is common in not only Muslim societies but also in some Christian communities. A shocking estimated 140 million women and girls have received female genital mutilation according to the World Health Organization. These unnerving facts show why women all over the world need to be thought of as equals in society because they are. In summary, all over the world women are treated with a lack of respect. The inequality of women, especially in the Muslim world, needs to be abolished because women have less freedom due to their restricted relationships, lesser salary/fewer job opportunities, and rights.

The female population should be treated with the same regard as their male counterparts are because all human beings are equal. If more women were educated about their own equality, they could fight to have equal rights, but because of their lack of knowledge on this topic, many women think what is occurring is fair when it is not. In order to create a better, more equal society, people need to be educated on more than just science, English, history, and math. People need to be educated on what is going on all over the world and need to be fueled to change it.

The Inequality of Women in Our World: The Restriction of Their Relationships, Their Job Opportunities, and Their Rights. (2021, Oct 11). Retrieved from https://studymoose.com/the-inequality-of-women-in-our-world-the-restriction-of-their-relationships-their-job-opportunities-and-their-rights-essay 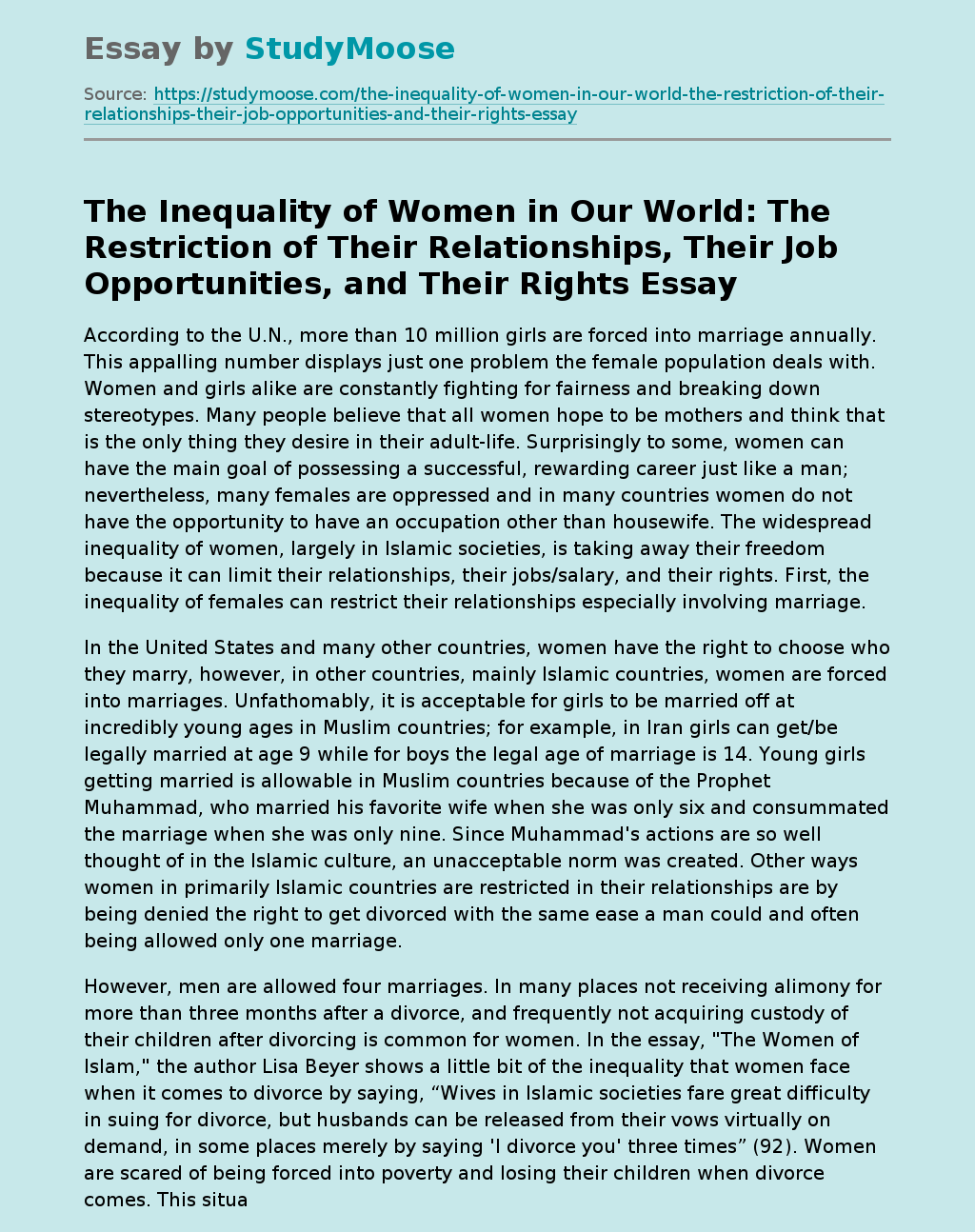