The Inclusion of Transgender Women in the Miss Universe

In a beauty-pageant-crazy country like the Philippines, the annual Miss Universe pageantry is a most-awaited event for many Filipinos. It is that time when many Filipino people gravitate towards their TV sets with their eyes wide open as though entranced on the pageant events as they unfold. Probably next to boxing, the Miss Universe pageant is the most-widely watched worldwide event in the Philippines. As evidence of the country’s penchant for this event, the country has fared quite well as far as producing winners is concerned.

Don't use plagiarized sources. Get your custom essay on
“ The Inclusion of Transgender Women in the Miss Universe ”
Get custom paper
NEW! smart matching with writer

Gloria Diaz copped the coveted crown in 1969. Margie Moran duplicated the feat in 1973. And not a few others almost brought home the crown in their respective attempts: Miriam Quiambao landed 1st runner-up in 1999; Desiree Verdadero made it to the final 5 and landed 3rd runner-up in 1983. Most recently, Venus Raj won 4th runner-up last year and Shamcey Supsup upped the ante by landing 3rd runner-up this year. The Miss Universe pageant of pulchritude draws everybody’s attention.

Any news about it is lapped up by both local and international media.

This beauty competition is indeed newsworthy – even by itself. A recent turn of events, however, has sent the entire beauty pageant-conscious members of the populace even more curious and intrigued by the recent amendments to the pageant rules. The pageant’s governing body – with its owner, Mr. Donald Trump nodding in approval himself – has decided in favor of a transgender woman from Canada by allowing her to compete among biologically-born female contestants in the said pageant.

Subsequently, sentiments from different sectors go abuzz. Some give their nods of approval.

Others though sneered. The Miss Universe beauty pageant continues to stew in controversy over the appeals of disqualified Canadian candidate Jenna Talackova, a transgender woman, with a former Miss Universe finalist rejecting the notion of contestants who sport male genitals. The Miss Universe Organization (MUO) announced that they have lifted the disqualification and has decided to reinstate Talackova in the competition. The organization also said that they are going to revamp the pageant rules to accommodate transgender women in the contest beginning 2013.

According to MUO President Paula Shugart, who was quoted in an article published on the official website of the Gay and Lesbian Alliance Against Discrimination (GLAAD): “We want to give credit where credit is due, and the decision to include transgender women in our beauty competitions is a result of our ongoing discussions with GLAAD and not Jenna’s legal representation, which if anything, delayed the process. “We have a long history of supporting equality for all women, and this was something we took very seriously.

The Inclusion of Transgender Women in the Miss Universe. (2020, Nov 18). Retrieved from https://studymoose.com/the-inclusion-of-transgender-women-in-the-miss-universe-essay 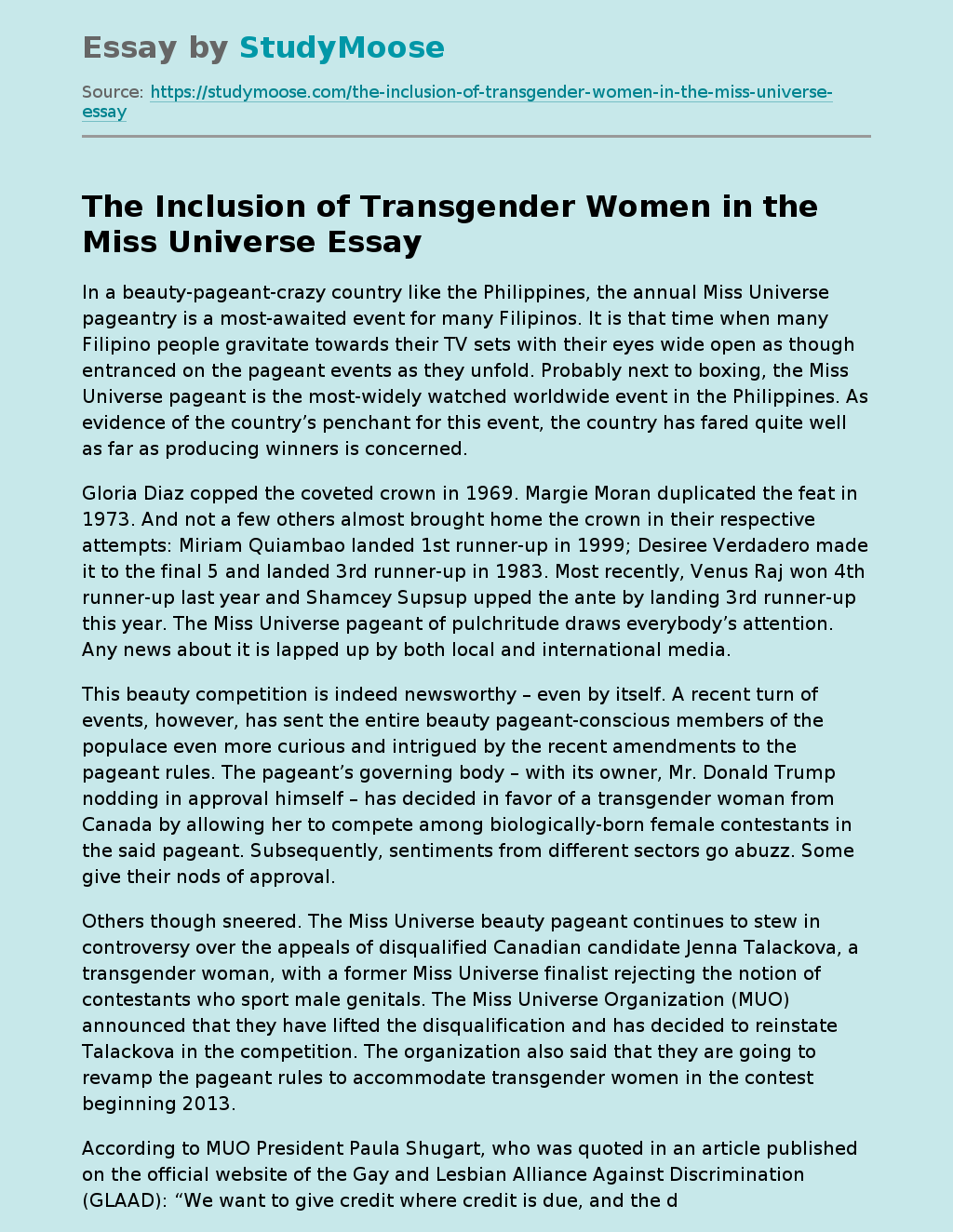