The Importance of Prayer

Prayer means different things to people in different religions all around the world. Some people may not identify as religious but still practice a form of prayer. This could be in the form of reflection or meditation. Some people pray many times a day, others just in times of need. This essay will predominantly focus on Catholicism and along with the results from research and surveys will seek to discover how important prayer in today’s society is.

Don't use plagiarized sources. Get your custom essay on
“ The Importance of Prayer ”
Get custom paper
NEW! smart matching with writer

She says, “There are countless medical reports on longevity for individuals who center life on church, worship, prayer and meditation. Prayer is asking God for ones desires or needs of others, while meditation is waiting on God to answer.” (Mallet, 2013) Buddhists practice meditation and believe this awakens their inner passion, strength and wisdom within them. (Sensei 2006) Hindus chant their prayers and believe this evokes gods which can help them.

They believe prayer has two parts: one is soliciting a favor from the Almighty, the other is surrendering themselves to His will. (Rajhans 2013) Muslims’ prayers have specific actions and words. The Religion of Islam website says, “Prayer is a unique training and development program which, if well and devotedly performed, can achieve for a Muslim many valuable spiritual, physical and ethical gains.” Muslims praise Allah five times a day and ask for forgiveness and guidance which helps them develop discipline.

Their holy book, the Quran, says at 20:13-14 “There is none worthy of worship but I, so worship Me and offer prayer perfectly for My remembrance.

” Christians offer formal prayers in Church read from the Missal if Catholic or from the Book of Common Prayer if Anglican. People are very sensitive about their religious beliefs and where they pray. On 19 August 2013 the Malay Mail online reported that a group of Buddhists’ visiting Malaysia asked for a place to pray and the hotel management let them use the Muslim mosque. This caused outrage and the Muslim resort owner was arrested. Tee reported “Yes, I don’t deny that Islam is universal, but being universal does not mean we can share a god or a house of worship, like other religions”. Clearly this demonstrates how important prayer is to these two different groups.

A survey was conducted about the importance of prayer in today’s society. Respondents comprised male and female Catholics 40 – 60 years old. The survey suggested the majority of Catholics 48% were taught to pray by their parents, 17% at school and 13% in Sunday school. Everyone remembered who had taught them to pray. This is a reflection of why prayer is still important in people’s lives today. Young people are susceptible and influenced by their parents and respected adult figures to a large degree. They are good role models for their children. In the My Way to God, Book 2 (p. 47) it says, “God likes us to tell Him things. When we talk to Him we are praying … When we tell God things, we think quietly about Him. We listen for His answer. God does not say words in our ears, but He puts thoughts into our minds.”

This reinforces that praying does not have to be onerous and listening intently helps to decipher what God is saying. The Bible teaches Catholics why they should pray and the importance it has in life. Several passages include; Genesis 25:21 “Isaac prayed to the Lord for his wife, because she was barren; and the Lord answered his prayer, and his wife Rebekah conceived”. Mathew 21:22 “Whatever you ask for in prayer with faith, you will receive.” In Luke 11:1-5 Jesus teaches the Lord’s Prayer. Catholics place great importance on formal prayers like the Our Father and Hail Mary. These are recited on formal occasions in Church. Once learnt are always remembered making praying easier.

The survey data in graph 1 shows 59% of people say informal prayers. Every religion may have different prayers or different ways to say their prayers but they are all communicating with their God. The survey showed, 31% said formal prayers like the Rosary or Our Father. It was interesting to note why people pray and how important it was to them. Graph 2 shows that 30% of people pray for guidance to help them with making decisions in their lives, while 13% pray for comfort or deceased friends and family. Then there were several reasons equal at 9% which included seeking happiness, good health or just to talk with God which again brings comfort and solace. Lastly, asking for forgiveness and to give thanks for good outcomes or good advice rated 4% each. This suggests that praying is not something one does out of duty or necessity but people do it for all sorts of personal reasons. It is not an obligation but more of an option.

The question about whether prayer was an important part of the respondent’s lives evoked strong views. Graph 3 shows that over 67% said prayer was important some saying it essential, others said definitely. Less than 33% responded not really but said prayer had helped them at some time in their life. The majority thought it comforted them and helped them during difficult times. A few said it supported and strengthened them and one said it underpinned their way of life. Analysing the results it is quite clear that people still see prayer as an important part of their life. This generation were taught by their parents and school to pray with many choosing to pray informally. It offers them something they cannot get anywhere else whether it is comfort, guidance, support or hope, it is seen as important in their life.

From this investigation, comprising significant research and surveys it is clear that prayer is still important in society today. Even if one does not identify as being religious they may still meditate or practice reflection. As Mallet suggests “People who pray, live longer and happier lives. They are not exempt from crisis or unexpected tragedies; but rather able to cope on a deeper level with prayer and meditation through life’s trails.” (Mallet 2013). Houdmann agrees that “daily prayer gives us an opportunity to share all aspects of one’s life with God. It is a chance to express gratitude for the things in life that He provides. It is the platform for confessing our sin and asking for help repenting of that sin.” (Houdmann 2012)

Prayer in different religions can be carried out in different ways. Catholics pray using formal and informal prayers. Praying is important for various personal reasons. It is something that everyone should learn to do and know the rewards it offers. No matter what religion you choose to follow talking with God has its benefits. It is as important today as it was in the beginning and will continue to be into the future. Word count: 1000

Rajhans. G, 2013, About.Com Hinduism, Why and How to Pray, [Internet] http://hinduism.about.com/od/prayersmantras/a/why_and_how_to_pray.htm> {Accessed 4 September 2013}

The Importance of Prayer. (2016, Apr 21). Retrieved from http://studymoose.com/the-importance-of-prayer-essay 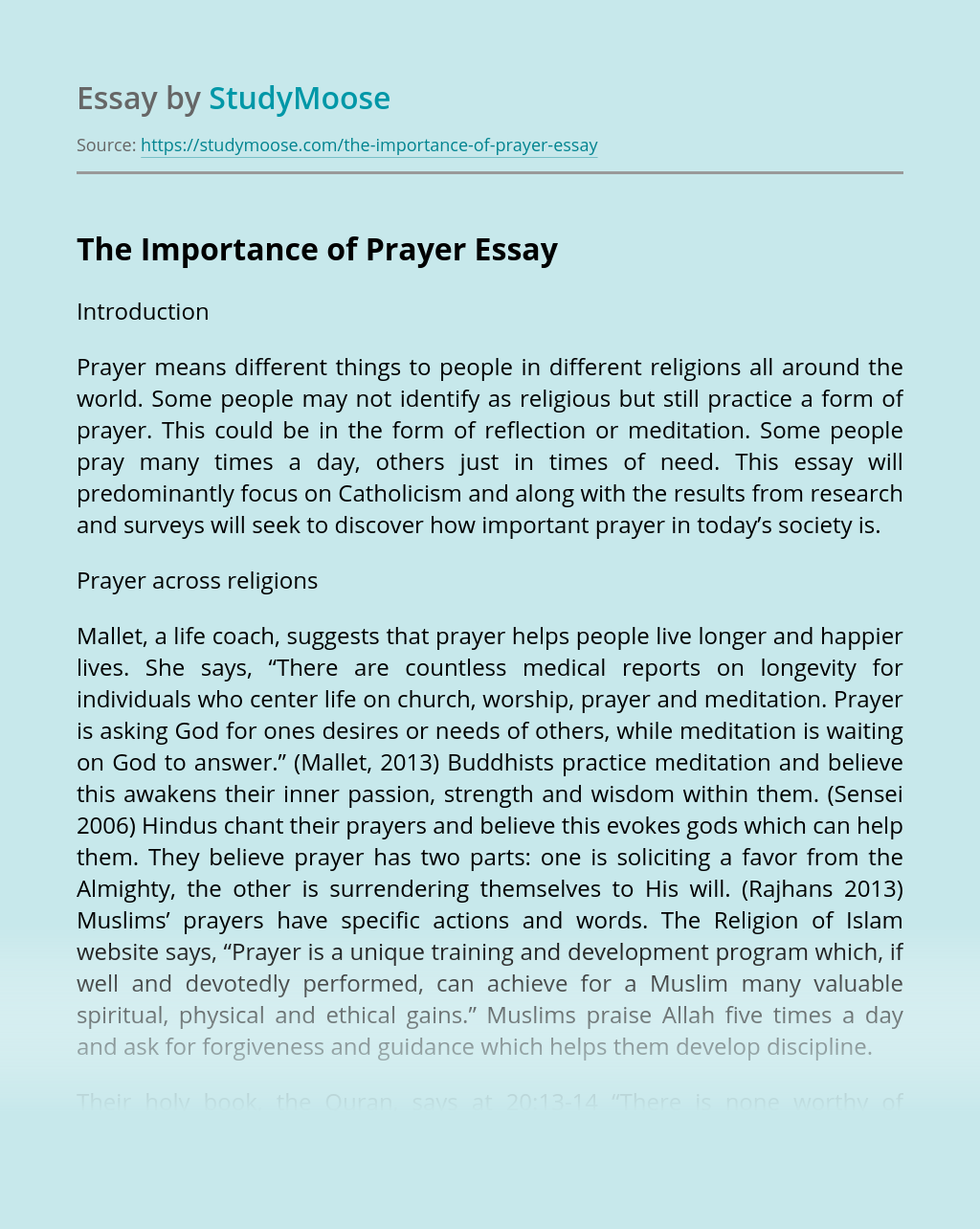