The Importance of Poson Poya

Festival celebrated in Sri Lanka on the full moon of June. The Poson Poya, which is specially noteworthy to the Sri Lankan Buddhists as the day on which Emperor Asoka’s son, the arahant Mahinda, officially introduced Buddhism to the island in the 3rd century B.C. In addition to the normal ritualistic observances undertaken on a poya day, on Poson day devotees flock to Anuradhapura, the ancient capital city of the country, for it was there that arahant Mahinda converted the then ruler, King Devanampiya Tissa, and his court to Buddhism, thereby setting in motion a series of events that finally made Sri Lanka the home of Theravada Buddhism.

Even today, on Poson Poya, Anuradhapura becomes the center of Buddhist activity. Mihintale, the spot where the momentous encounter between the Elder and the King took place, accordingly receives the reverential attention of the devotees. The two rituals of pilgrimage and the observance of the Eight Precepts are combined here. Processions commemorative of the event, referred to as Mihindu Peraheras, are held in various parts of the country

In the 3rd century BC, area of Mihinthalawa was a thick jungle area inhibited by wild animals and was a hunting ground reserved for the royals.

All this changed in 250 BC when the son of the Indian Emperor Asoka, Mahinda Maha Thero arrived at the Missaka Pauwa to meet king Devamnampiyatissa for the first time and asked the famous questions to decide whether he is intelligent enough to understand the philosophy of the Buddha.

Arrival of Buddhism to Sri Lanka

Official Arrival of Buddhism -Mihindu Thero, son of Emperor Asoka meets Lankan king On 16th May, 246 BC, Lankan king Devanampiyatissa went on his regular Royal hunting in the 450-acre Royal National Park of four mountains, each of them, over 1000 feet tall. He got separated from his friends as he chased a deer. On one of the four mountains, he met Mihindu thero (Son of Emperor Asoka), and the Buddhist party despatched by the Emperor Asoka himself. The famous questions to check if the king had the wisdom to understand Buddhism were asked by Mihindu thero. Then, Lankan king listened, and asked questions, and by daybreak, became a Buddhist. People flock to A’pura to listen to Bana People from all over the country who came to listen to the Buddhist teaching by Mihindu Thero flooded Anuradapura.

Over 8500 people embraced Buddhism during the first week alone. 55 members of the prime ministers family became Buddhist monks. Buddhism then took root as the formal belief system of the island. This was how Lankans were able to concentrate as a nation, voluntarily, to advance to become one of the developed nations in the world. Why did Lankans embrace Buddhism as a National Philosophy? Lankans were, even before the arrival of Buddhism, uncorrupt, no-nonsense people who wanted the balance between the material wealth and the spiritual well being. Lankans had resisted the attempts by many foreigners, who arrived as merchants, to introduce the selfishness, corruption and mal-practices that had developed in other parts of the world.

Instead, Lankans took what was good from the other parts of the world, and created this almost fairy tale-like civilisation of wealth and inner peace. Not only they found that Buddhism was one of the good things they could learn from the outside world, Buddhism fitted very well into the vacuum they had so far in the National philosophy, in spiritual happiness and inner peace. Never in their history they turned down what was best, spiritually and materially. It was their nature to search for the truth, to search for the ultimate peace and happiness and reject the injustice, selfishness, fraud and propaganda.

Poson Full Moon Poya Day is of very special significance to Sri Lanka because it was on this day in the year 247 BC that Buddhism was introduced to this country. It was from this momentous day in the annals of our country that our people have been able to follow and practise a philosophy that far surpasses any that has been known to mankind. Buddhism has earned the encomiums of thinkers of both the Orient and the Occidentsuch as Jawaharlal Nehru and Bertrand Russel. So much so Buddhism has become the fastest spreading religion in the world today.

Emperor Asoka was instrumental in introducing Buddhism to Sri Lanka. He was such a devout and righteous monarch that historian H. G. Wells describes him thus: “Amidst the tens of thousands of names of monarchs that crowd the columns of history, their majesties and graciousness and serenities and royal highnesses and the like, the name of Asoka shines, and shines almost alone a star. From the Volga to Japan his name is still honoured. China, Tibet and even India, though it has left his doctrine, preserve the tradition of his greatness. More living men cherish his memory today than have ever heard the names of Constantine or Charlemagne.

Asoka’s son himself accompanied by four Bhikkhus, one Samanera and lay Upasaka arrived in Lanka to convert the Sinhalas. It was on a festival day that they reached Lanka. They met the reigning King Devanampiyatissa who had gone with a party to hunt deer on a hill called Missaka (modern Mihintale). The Arahant Mahinda arrested the attention of the king by addressing him simply as ‘Tissa’. An interesting conversation then followed. After this the Arahant Mahinda preached the Cullahatthipadopama Sutta to the king and his followers, hearing which they all sought refuge in the Buddha, the Dhamma and the Sangha and embraced this new teaching.

The mission headed by the Arahant Mahinda included Itthiya, Utthiya, Sambala and Bhaddasala Theras so that it would be possible to perform the Upasampada ceremony which required five Theras. Special importance was attached to this mission to Lanka by Emperor Asoka as evident from entrusting it to Arahant Mahinda, son of Asoka himself. Tissa had been a friend of Asoka even before the former’s elevation to the throne though the two had never met. The first thing that Tissa did after the inauguration of his rule in 250 BC was to send envoys, bearing costly presents to Asoka. At the head of this diplomatic mission was Tissa’s own nephew Maha Arittha and its members included the Brahmana chaplain, a minister and the treasurer.

The envoys embarked at Jambukola on the northern coast of the modern Jaffna peninsula and reached Tamnalitti (Tamralipti, the modern Tamluk in Bengal) after a voyage of seven days. In seven more days they reached Pataliputra the capital of Magadha, where they delivered Tissa’s presents to the Maurya emperor. Asoka received the envoys with graciousness, conferred suitable ranks on the members of the mission and entertained them in a befitting manner. As return presents to the Lanka ruler, Asoka sent everything that was necessary for a royal consecration and an exhortation to embrace the Buddhist faith.

After a stay of five months at Pataliputra, Arittha and his companions returned home, bearing the presents of Asoka with which Tissa was consecrated, as the chronicles say, for the second time. The statement in an ancient text that before Tissa there was no royal consecration in Lanka, and the fact that Tissa and his successors bore the title of Devanampiya, by which Asoka refers to himself, in his inscriptions, indicate that the purpose of Tissa in sending the mission to the Maurya court was to obtain the consent and support of the Indian potentate for his assumption of regal status which his predecessors did not enjoy. It was just a month after his consecration with Maurya ceremonial that Arahant Mahinda arrived in the island and Tissa, we may be certain, was prepared to give him an enthusiastic welcome.

The undoubted powers of persuasion which the preacher possessed must have been reinforced by the message, fresh in the king’s memory, which his envoys brought from Asoka and Tissa gave the preacher a ready hearing. Having invited the missionaries to the city, he left for his palace. The first day of Arahant Mahinda in Lanka was spent at Mihintale, where he solemnised the first ecclesiastical act by admitting to the Order a lay follower who had accompanied him from India. Arrived at Anuradhapura and having taken up his abode in the royal pavilion in the Mahamegha park to the south of the city, the Arahant Mahinda preached a number of sermons in the days that followed and established thousands of people of all ranks, men as well as women, firmly in the faith.

Many took to the holy orders and, for their residence the king granted to the Sangha the royal park of Mahamegha. The consecrated boundaries were fixed by the king himself ploughing a furrow to mark them and so as to include the city within them. The accounts of the conversion of the king and the people of Lanka to Buddhism, written by monks after that religion had secured for itself dominance over the minds of the people, are overlaid with edifying legends in which the miraculous element is conspicuous.

Arahant Mahinda and his companions transport themselves by air from Vedisagiri to Mihintale, gods are at hand to make smooth the path of the religious teachers and impress the multitude with the efficacy of their doctrines. Earthquakes which do no harm to anyone vouch for the veracity of the prophecies ascribed to the Arahant Mahinda. At sermons preached on important occasions the Devas in the congregation far outnumber the humans. Elephants without anyone’s bidding, indicate to the king the exact spots on which sacred shrines are to be sited. In spite of this legendary overlay, the main event i.e. that Buddhism was accepted by the people and the ruler of Lanka, is attested by the presence at Minintale and Anuradhapura of epigraphical and other monuments of a Buddhist character attributable to that period.

Arahant Mahinda’s Lanka mission was a great success. He found in Lanka a fertile soil to disseminate the sublime teachings of the Buddha. With royal patronage Buddhism was firmly established in Lanka.

The Importance of Poson Poya. (2017, May 24). Retrieved from http://studymoose.com/the-importance-of-poson-poya-essay 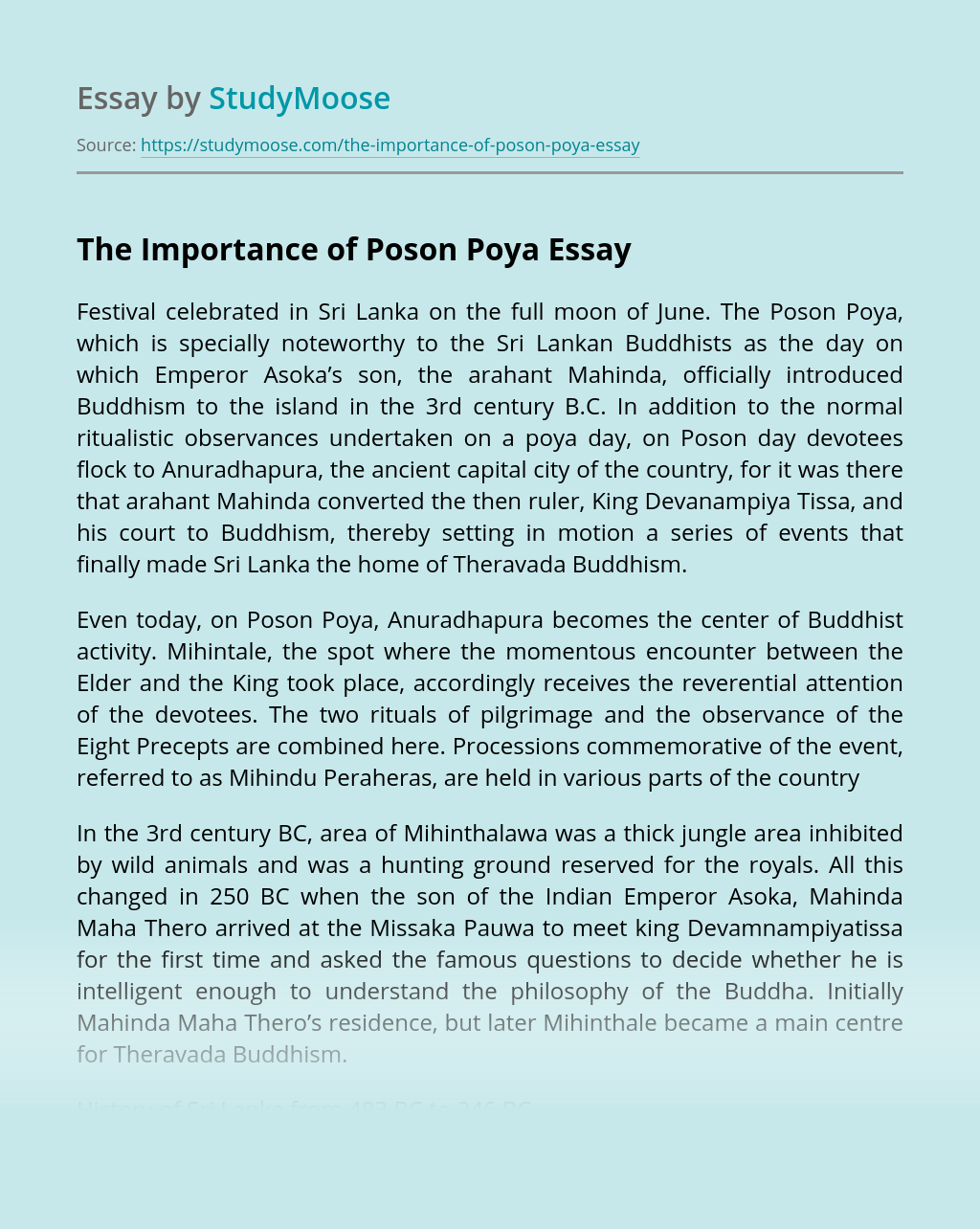 Don’t waste time
Get a verified writer to help you with The Importance of Poson Poya
Hire verified writer
$35.80 for a 2-page paper
Stay Safe, Stay Original