Importance of Memory in Steele's Work

In the essay, “An Hour or Two Sacred to Sorrow,” the writer, Richard Steele, explains to the reader that many unexpected and unfortunate events may occur in our lifetime; however, those occurrences should be looked back upon rather than forgotten. He writes from his own experiences of loss, but continues to include the fact that it is acceptable even satisfying to remember such events. The writer begins by reliving the day his father died. At a mere age of five he remembers knowing something was wrong because no one would play with him, but no recollection as to what was truly amiss in the situation.

Don't use plagiarized sources. Get your custom essay on
“ Importance of Memory in Steele’s Work ”
Get custom paper
NEW! smart matching with writer

When he says, “I…fell a-beating at the coffin and calling Papa…” that statement along with, “… I know not how. I had some slight idea that he was locked up in there,” explains further that he knew something was unsound about the situation just not exactly what it was. He then talks about how his mother smothers him out of her own grief, which struck his instinct of sorrow for his mother.

He then moves on to express the fact that when we’re older we obtain memory better than at a younger age; in addition, he explains that different memories cause different reactions in a person. For instance, when a person passes away all you find yourself remembering is their death not the cheerful memories they left with you. He then elaborates this point by saying, “… gallant men.. cut off by the sword move rather our veneration than our pity…” Saying this he points out that when a man from the military dies we are more respectful than sorry or upset by the incident.

Many people would prefer not to remember the mournful events of their lives, but rather the joyful experiences. In continuation he says that the first beauty he ever beheld was in a virgin. He describes her as ignorantly charming and carelessly excelling, which lead him to understand why death should have a right to her, but it still baffles him why death also seems drawn to the humble and meek.

He watches death become an object of little value when he states, “… death become the pretty trifler.” He describes the virgins sudden death and the anguish he felt after hearing this news. He then invites friends who had known her, and they began drinking two bottles of wine apiece; however, he finds that no matter how much he drinks it can not erase what had happened the night before. Which gave them all the more reason to recollect the impact she had left on their lives. In conclusion the writer relives past dismal experiences that stood out in his memory. In many ways life can be full of sorrow, but we must learn how to move on from these events in our lives. on to better times. He explains that many unexpected and unfortunate events may occur in our lifetime; however, those occurrences should be looked back upon rather than forgotten.

Importance of Memory in Steele's Work. (2016, Mar 18). Retrieved from https://studymoose.com/importance-of-memory-in-steeles-work-essay 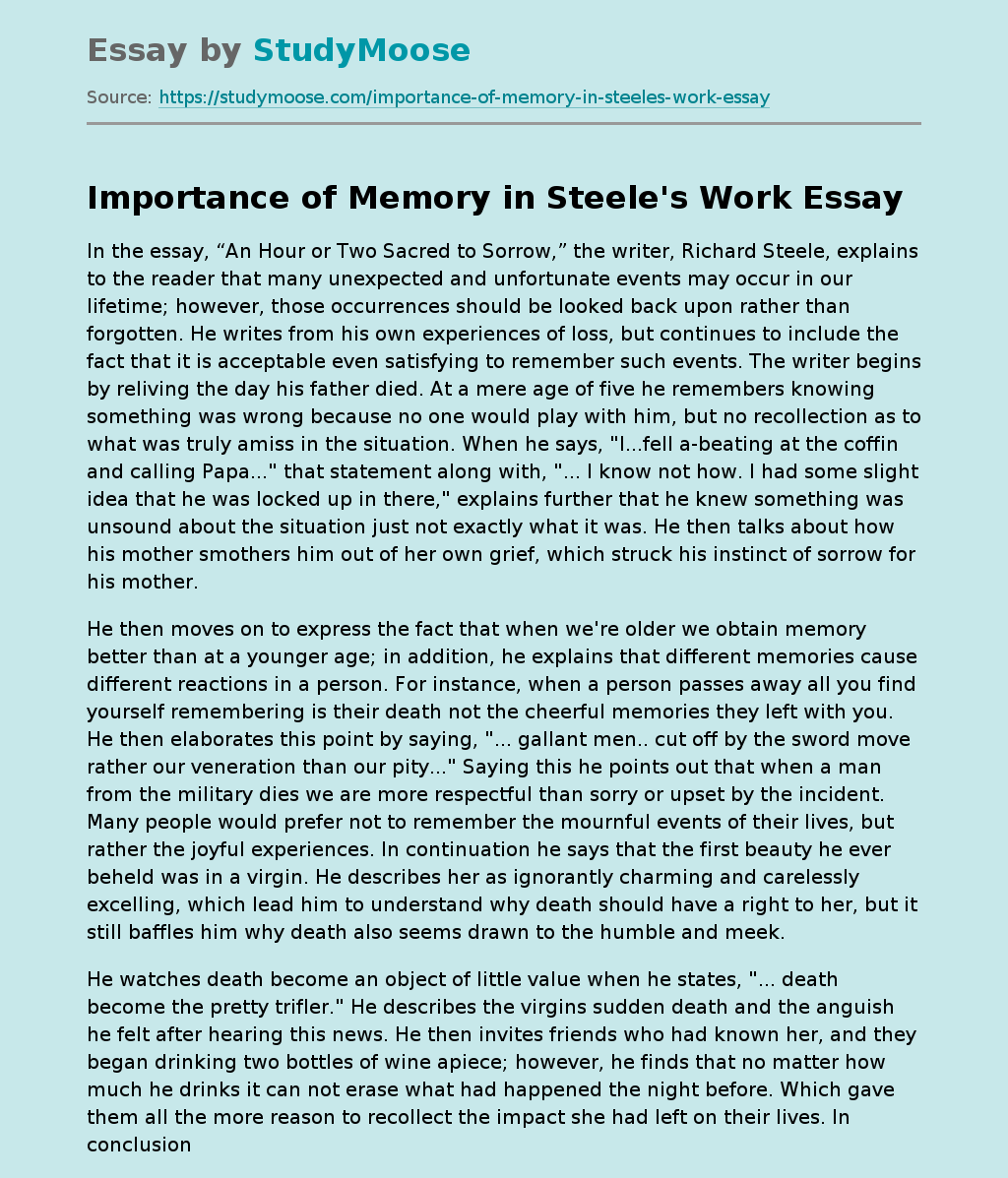