The Importance of Childhood Immunizations

Parents are asking a question when they take their offspring to their pediatrician. Do we have to vaccinate our children? Many parents question the importance or even the need for their children to receive vaccinations. The reasons for their objections or doubts vary from religious beliefs, a lack of understanding exactly what immunizations really are, or fear that their children may acquire a serious reaction to the vaccines themselves. Immunizations are safe and effective, yet many still question their importance and place in society.

Don't use plagiarized sources. Get your custom essay on
“ The Importance of Childhood Immunizations ”
Get custom paper
NEW! smart matching with writer

The purpose behind vaccinations is to create an environment where children are safe and free from disease. According to the Centers For Disease Control and Prevention (CDC) (2007), “Vaccines interact with the immune system and often produce an immune response similar to that produced by the natural infection. They do not subject the child receiving the vaccine to the disease itself or its potential complications.” After all, who would intentionally want to put a child at risk?Immunization programs are among the most noteworthy public health achievement stories.

Major disease outbreaks are virtually unheard of in the United States because aggressive vaccinations throughout the years have suppressed or eliminated many of the potentially deadly diseases that our children could possibly contract. Currently, diseases that are preventable by immunizations are at or near record lows.

The CDC (2007) states, “Public health department’s recommendations for immunization plans and practices represent a recognizable balancing of risks and benefits.” Such was the case with smallpox and oral polio vaccines in the United States.

Through safe vaccine monitoring to evaluate precisely the stability and regulate immunization guidelines, these two diseases neared global eradication. Polio once created widespread panic. Defined by the CDC (2007), “Polio (the disease) is the effect of poliomyelitis virus on the spinal cord that leads to the classic outcome of paralysis.” An innocent swim at the local pool might have caused a child to spend his life in a wheelchair or in leg braces.

Just to put it into perspective, consider this…according to the CDC (2007), “before polio immunizations began in 1955, polio reached a peak in the United States in 1952, with more than 21,000 paralytic cases. However, following introduction of effective vaccines, polio incidence declined rapidly. The last case of wild-virus polio acquired in the United States was in 1979.” Today, there are no cases of polio to report in the United States. Consequently, problems linked with the vaccine go beyond the dangers of the disease itself. By virtue of its absence, the disease is no longer a reminder of the importance of immunizations.

Getting all children vaccinated is not only important for are own child, but also important for other children as well. Maintaining civic assurance in vaccinations is vital for avoiding a drop in immunization rates. New outbreaks of disease will result from non-compliance and indifference. While a large part of parents consider the benefits of vaccinations and have their children immunized, there are still parents who worry and fear about the safety of immunizations. According to the CDC (2007), “In the 1980’s, there were public concerns about the safety of whole-cell pertussis vaccine.

This resulted in decreased vaccine coverage levels and the return of epidemic disease in Japan, Sweden, United Kingdom, and several other countries.”Try to imagine seeing one of our children contract a disease that could have been prevented by a vaccination. For example, mumps is an acute viral illness that travels from person to person by respiratory droplets. Side effects of this disease can range from headaches and swelling of glands in the neck region to having a fever, vomiting, and possible breathing problems, arthritis, arthralgia, and nephritis. None of our children ought to suffer, especially from an immunization preventable disease that could have been stopped with the appropriate immunization. The scenario below illustrates a particular mother’s refusal to get her child vaccinated.

Some of my young patients have parents who, despite being well educated have, in my opinion, some irrational beliefs. An example of this is a young mother who recently refused to vaccinate her baby. This mother said that she had heard of adverse reactions to vaccines and she did not want to risk her baby’s health. She had heard that some vaccines have dangerous additives, that the measles vaccine is associated with autism and that the varicella (chickenpox) vaccine could cause her child to have chickenpox in adulthood when it would be more dangerous. Vaccines, she had read, weaken the immune system.

I tried to explain that many of her concerns have been addressed but she would have none of it. “Doctors are uninformed about the risks of vaccines,” she said. “Vaccines actually cause diseases instead of preventing them.” This seemed like too much of an argument for me to tackle during an office visit.

I concluded that this mother is taking advantage of the fact that other children are immunized and relies on the immunization of others to protect her child from diseases. I suggested that she think about the benefits of immunizations and remain open to changing her mind. (Kimmel, 2003, p. 651)Many parents do not have their children immunized because of religious beliefs. Since potential harm could possibly come from some vaccinations, parents believe they cannot allow their children to receive them. According to the CDC, “…states that provide a religious exemption do not report any higher rates in vaccine preventable diseases.” (Klicka, C. 2006.) Keep in mind children receiving vaccinations can help stop epidemics from spreading or reoccurring. This may be an explanation as to why these states with religious exemptions do not report a higher rate in diseases.

So, what can happen if we do not vaccinate our children? Why not take the chance on beliefs, or luck, that our children will not contract any disease and survive without any complications through life. That is a chance we would have to think long and hard about. There is always that factor…what if? What if our children came down with a case of the whooping cough? Our children could develop coughing spells and that would eventually make it difficult for him/her to complete normal everyday activities, such as eating, drinking and breathing. Try to imagine cradling a child while they are wheezing and trying to catch their own breath night after night for a couple of months.

Unforeseen consequences may follow if we choose not to vaccinate our children. Consider for a moment that our children have contracted a vaccine-preventable illness. You may be forced to stay at-home, and care for that child. In turn, one or more of the parents may have to miss countless days of work, and the child misses days of school. A sick child also translates into numerous doctor visits and monies spent not only on those visits but medication as well.

Stated in a recent newspaper article, “Adding to public concern about vaccines is the fact that immunization is mandated by many state and local school entry requirements. A state enforced law passed in Suffolk, Virginia states, those children who do not show proof of vaccination, will not be allowed to attend school.” (Walson, K. Feb2006.) Mrs.Tine-Reichardt of Prevention Magazine suggests, “childhood immunizations an important topic we need to discuss with our child’s physician. It is normal for a parent to question medical practices, such as skipping the rumor mill and discussing our fears. She also suggests, to delay in getting our children vaccinated if they are currently under the weather with a cold or the flu.” (Van Tine-Reichardt, J. Dec2004).

The CDC (2007) states, “Prior to federal licensing, vaccines, like other pharmaceutical products, undergo extensive safety evaluations in the laboratory, in animals and in human clinical trials. The vaccines undergo testing for purity and potency. The Food and Drug Administration (FDA) licensure occurs only after the vaccine has met rigorous standards of efficacy and safety, and when its potential benefits in preventing disease clearly outweigh any risks. Manufacturers must submit samples of each vaccine lot and results of their own tests for potency and purity. Only after the FDA approves them can they be released for public use.

“Vaccine-preventable diseasesThe World Health Organization reported (2002), “an estimated 1.4 million of deaths among children under 5 years were due to diseases that could have been prevented by routine vaccination.”According to the CDC (2007), “Approximately 100 million doses of childhood vaccines have been distributed during the past decade, as well as millions of additional doses given to adults.” When the time comes, we need to make certain we as parents have all the important facts and details available to us.

The basic concept behind immunization is to produce a state of resistance to these childhood infectious diseases through the calculated, artificial stimulation of the body’s defenses against each disease. Ideally, this is done without causing any symptoms or signs of illness.

In reality, no immunizing biological agent is completely safe, and it may produce side effects. It is important to assess each individual child and each individual vaccine, and then allow the parent to decide what to do after weighing all the facts and sorting out the fiction.

We are fortunate that we have stopped the epidemics of smallpox, polio, diphtheria, and measles. The introduction of vaccines has accomplished more than we dreamed they would. Vaccines have become a necessary part of our world-for the current health of our children and for future generations. But because each act of administering small bits of disease and foreign substances to children opens the door to the possibility of debilitating consequences or even death, every possible attempt must be made to ensure that today’s vaccines and those in the future are as safe as possible.

I am not suggesting that we return to the days without vaccines. But we must seriously address what appears to be an obvious link between the epidemic of developmental delays, autoimmune diseases, and the increasing number of mandatory vaccines. Every parent should know the advantages as well as the dangers associated with each and every vaccine, each and every time it is given. They should know the positive and negative consequences of refusing that their children be vaccinated, and be made aware of how they can go about getting exemptions.

And the government, industry, health-care professionals, and parents must band together to get the research needed to determine the safety of these vaccines. The stakes are too high for us to do otherwise. (Cave, S. 2001)If questions or concerns arise, we as responsible parents need to consult with our doctor or local health department about the facts, not our friends about the stories or rumors. The failure to do so could be deadly and hit close to home.

The Importance of Childhood Immunizations. (2021, May 30). Retrieved from https://studymoose.com/the-importance-of-childhood-immunizations-essay 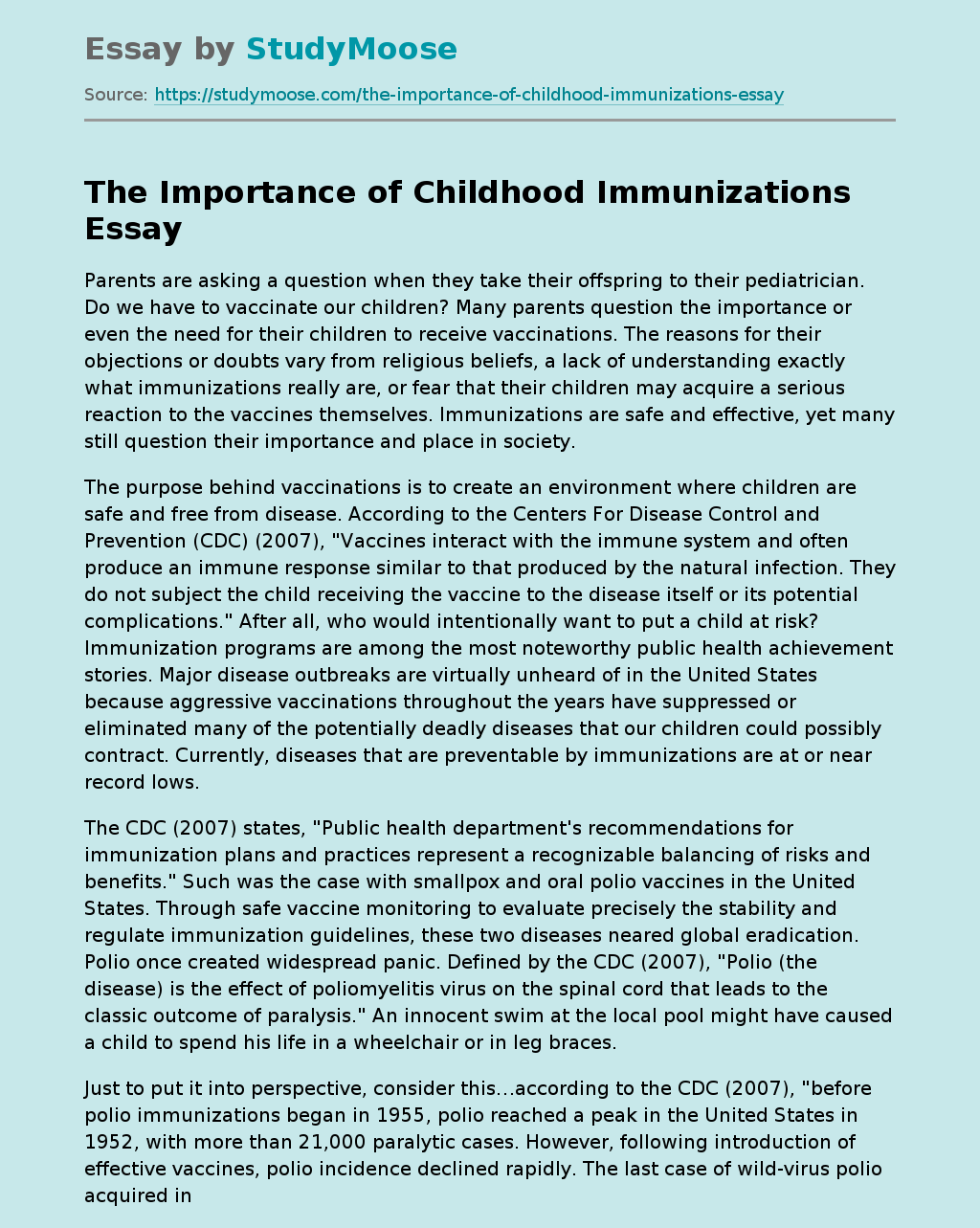