What is a discourse? Describe two competing discourses of childhood and suggest the ways that they can have an impact on children’s lives.

Don't use plagiarized sources.
Get Your Custom Essay on Discourses in Childhood Just from $13,9/Page

Within the social constructionist theory there are 3 main discourses – romantic, puritan and tabula rasa. This essay will look at 2 of those discourses, which directly compete with each other – the Romantic and Puritan, and suggest ways in which they impact children’s lives.

This is contrary to the Puritan discourse, which believes children are born wicked, are amoral, without conscience, and if left to their own devices will resort to savagery. According to Hobbes (1588-1679), who supports this discourse, children should be controlled and disciplined by adults – even if it causes the child unhappiness, short-term pain or distress. Unlike the previous discourse, the Puritan discourse sees children as being responsible for their actions.

These discourses of childhood are seen constructed in the media. The Peugeot television advert (Video 1 Band 3, page no’s 239 – 256)gives an example of a man driving a car fanaticising about being a hero andsaving the little girl pictured from being run over. The advert tries to construct the image that the Peugeot is the type of car that will appeal to a “hero” and one who is a ‘protector.’ The advert is constructed in such a way to encourage the viewer to form an image of an innocent, vulnerable child and to treat children as people needing protection. (the man is the hero protecting the child from danger). It is obvious that this advert reflects the Romantic discourse.

One further advert constructed around the romantic discourse is the Evian water advert (Video 1 Band 3, video page no’s 256 – 257 & 266 – 268) featuring babies swimming in water. From this the viewer is meant to construct an image of the baby as being pure, and unspoiled. This advert is designed to encourage the viewer to think of pure Evian water and a ‘pure’ baby, suggesting that babies are innocent because they are pure.

As already said the romantic and puritan discourses are directly competing.

The Puritan discourse can be seen through the following 2 film clips. Thefirst is from the film “Leon” (Video 1 Band 3, video page no’s 271 – 297) which is a story of the friendship between Leon, a professional assassin and Mathilda who is a young girl who’s parents and young brother have been killed and who asks Leon to teach her to kill so that she can avenge her family’s death. The film has constructed an image of Mathilda as an unruly, sinful, and wicked child which is how the puritan discourse describes children.

“Leon” shows that childhood in this case is not a time of innocence and that bad things, like violence and death are witnessed – and caused – by children. It shows a child – as Mathilda is obviously still a child – who has not had her childhoodprotected.

The final film clip (Video 1 Band 3 p 333-339) is that of “American Beauty” portraying a young girl named Angela who is a friend of Lester’s daughter’s. Angela is depicted in a way that makes the viewer think she is sexuallymature and like Mathilda in the previous clip – ‘knowing’ and not innocent.

This challenges the viewer’s ideas of childhood being a time of sexual innocence as here is a young girl oozing sexuality, definitely not innocence – but as a child lacking in morals, mirroring the puritan view of childhood.

However in a scene where Lester thinks his fantasy of Angela is about to come true, Angela reveals that she innocent in her knowledge of sexual matters, reminding viewers that she is still a child in need of protection. This film clip began as depicting an amoral, sinful, ‘knowing’ young girl in line with the puritan discourse and ends by depicting children as people in need of protection and who are innocent, and as childhood as a time which adults should be protecting the child from anything that will shatter the child’s innocence. In a sense, the end of the clip depicts the adult’s job as to be the hero, saving the child from ‘evil’ much the same as the man in the Peugeot advert mentioned earlier.

These discourses affect our views of children which in turn affects how children are thought of and therefore treated. In adopting a Romantic view, you will see children as innocence which in the 2 media clips, was associatedwith vulnerability and purity. According to Rousseau, children should be protected from the adult world, and everything should be done to make their childhood a happy carefree time. As already seen though through the 2 film clips, the Puritan discourse treats children as being unruly and in need of control. They are treated as being responsible for their actions and therefore they should be punished when they do wrong.

Having shown how romantic and puritan discourses can be seen in contemporary childhood through the use of the media, I will move on to look at a true life example – that of the murder of 3-year old James Bulger in1993. This little boy was badly beaten and left on a railway line after being abducted from his mum whilst on a shopping trip. His killers were two 10-year old boys. (Asquith 1996)To adopt the romantic discourse of childhood in dealing with the those two boys who killed James Bulger would be to suggest you believed the boys to be naturally good but corrupted by adults and therefore should be forgiven and given rehabilitation – not punishment.

On the other hand, to agree withthe competing discourse – that of the puritan discourse then you would seethose boys as being inherently evil and responsible for their own actions and therefore deserving punishment. Therefore it is clear that whichever discourse of childhood is chosen in dealing with children, it has implications on the way in which children are treated.

So far this essay has looked at the social constructionist approach to childhood, but will now consider another approach – the applied. Whenstudying childhood from an applied approach, the main interests are the effect which practical issues like the children’s upbringing and development will have on the children’s lives. Within this approach there are 2 models ofhow the law can deal with young offenders, like the boys in the James Bulger case. According to Asquith 1996 there are two models within the appliedapproach that give different opinions on how to deal with young offenders. These are linked to the discourses already mentioned within the social constructionist approach.

The welfare model uses social and individual factors in explaining why children do wrong – it is because they have been mistreated or deprived in some way. This mirrors the Romantic discourse in the sense that both see children as being innocent and blame other factors for children’s wrongdoings. It believes, therefore that children do not deserve to be punished but ought to be shown forgiveness and deserve to be cared for in order to overcome any disadvantages they have faced. In following this model, children should not be dealt with in a court of law but by means of rehabilitation and by considering what would be best for the child.

The justice model is in contrast to the welfare model and sees child offenders as being responsible for what they’ve done and deservepunishment and dealt with in a court of criminal law. The justicemodel mirrors the puritan discourse, as they hold similar beliefs thatchildren are innately evil and ought to be held responsible for their own actions and deserve to be punished accordingly.

This essay has looked at 2 competing discourses of childhood – the romantic and the puritan. They are competing in the way that they view children and childhood which in turn has a direct implication for the way that children are treated. Within the Romantic discourse, children are constructed as being pure, innocent and their childhood should be protected and kept carefree. This discourse competes with the puritan discourse which sees children as being innately wicked, unruly and lacking in moralsIt stands to reason therefore that these competing discourses have different implications for the way children are treated. In adopting a romantic discourse children will be forgiven for wrongs, protected from evil and offered rehabilitation when they do offend whereas in adopting a puritan discourse children who are “naughty” do so because of their innate evilness and deserve to be punished.

You may also be interested in the following: childhood hero 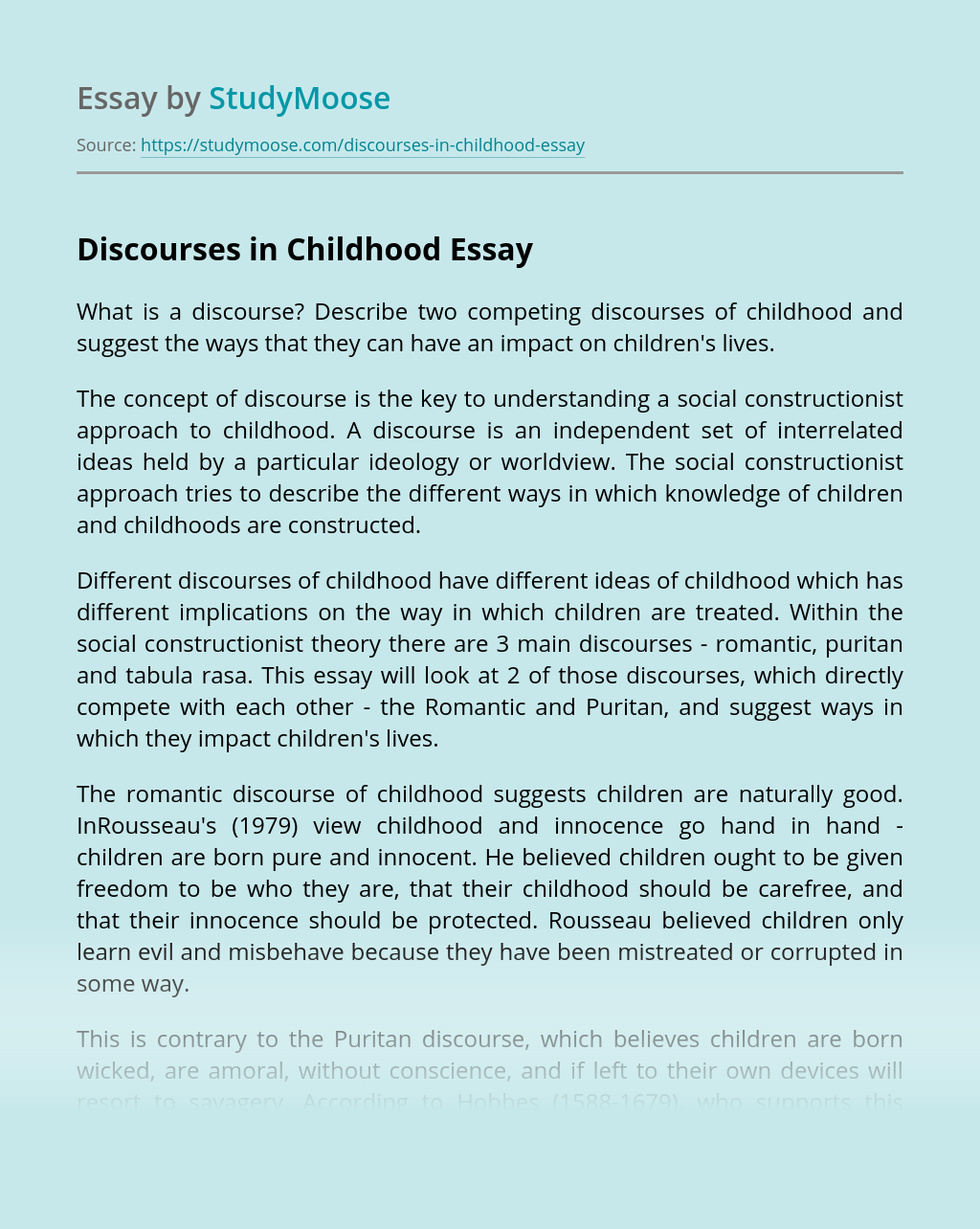