Early Mesopotamian city-states used the Tigris and Euphrates rivers in one of the earliest instances of civilizations discovering that transport of large, heavy, or numerous goods was far easier on the water than on land.

The Nile river’s importance to Egyptian civilization extended far beyond fertilizing soil and transportation. The ancient Egyptians relied on one source of water that allowed their nation to thrive for thousands of years because of the abundant resources it provided (O’Neal).

Don't use plagiarized sources. Get your custom essay on
“ The Importance of a Nile River As a Water Source to Civilizations ”
Get custom paper
NEW! smart matching with writer

“The Nile River was surrounded by a fertile strip of land that provided the ancient Egyptians with most of their material needs” (O’Neal). It was such an important aspect of life in Egypt that it was worshipped through religious rituals and even hymns, calling it “the bringer of food, rich in provisions, creator of all good, lord of majesty, sweet of fragrance…[it] makes every beloved tree to grow” (Pritchard).

Human communities naturally sprang up all along the Nile and relied on its annual flooding to provide silt-rich soil in which to sow their crops (O’Neal). “The soil was so rich that it was black, causing the area often to be referred to as the Black Land” (O’Neal). The Nile running 4,037 miles straight through the heart of Egypt provided the Egyptians with a transportation system, an abundance of crops, and much more than surpassed their material needs (Bauer). The Nile’s importance as a transportation highway increased Egypt’s wealth.

“By trading its surplus of grain, the nation was able to acquire many commodities, including lumber, metals, precious and semiprecious stones, minerals, and the like” (O’Neal). In the bible God directly states: “Who is this, rising like the Nile, like rivers whose waters surge? Egypt rises like the Nile, like rivers whose waters surge” (Bible). This gives a direct recount that as Nile’s water surges, Egypt rises. As the seasonal flooding of the Nile took place each year, it provided food, and crops, which caused the economy of Egypt to rise just as the Nile’s water rose. Due to the yearly “inundation” of the Nile, the Egyptian citizens were provided with the opportunity to supply food for huge communities, ultimately leading to the creation of a nation devised of hundreds of people, supported by a rich and fertile Nile valley (Bunson).

Although the Nile provided an abundance of crops and animals to eat, it also influenced the creation of many technologies that are still used even today. The Nile created an incentive for the Egyptians to create different kinds of boats to enhance trade and even fishing. The Nile provided the right tools and plants to be able to construct well-built boats. There were two main boats made by the Egyptians in ancient times. The first recount was a small boat made for fishing, constructed by a papyrus plant that was provided by the Nile (citation). They progressed from this small fishing boat to huge cargo boats that they used for trading. The Nile supplied a huge advantage for the travel of boats on the water (Spielvvogel). “It turns out that the Nile had another great advantage for boating. When boats were traveling north, they would be going with the current. When the ships were traveling south, they generally had the wind blowing in their direction and would use a sail. The ships often had oars to gain even more speed when traveling in either direction” (Ancient Egypt). These boats, created by the Egyptians, with resources from the Nile laid the foundation for future boat technology that is even implemented in modern-day boat structure.

The Mediterranean sea affected the stability of Athens’ government and provided trade routes, which ultimately led to the production of an unstoppable naval force, like no other to date. Athens greatly contradicted Egypt’s geography in that while Egypt was a desert supported by the Nile, Athens was a mountainous region supported by the trade routes of the Mediterranean Sea. Since Athens had a mountain-like terrain, they had to rely on the sea for transportation and trade. Athens was based on the coast of Greece and they regularly “enjoyed” more wealth and luxury than the inner city-states (“Travel by Sea in Ancient Greece’’). Athens, made up of mostly mountains, was not provided with the food and resources that Egypt was. They had to rely on trading to be supplied with even the most basic types of food. They traded for “cereals, Wine olives, Figs pulses, Eels, cheese, Honey, meat, tools, Perfumes, and fine pottery” (Cartwright). As the trade routes proved to be a very successful way for the Athenians to acquire food, it also came with substantial amounts of danger. Since their trade routes were on the sea, they were required to build ships to provide food for their city-state. Pirates were very common in this day in age and would attack Athenian trading ships and loot all of their food. The Athenians were constantly plagued with pirates and were then forced to “patrol” the Mediterranean sea with ships, leading to the creation of the Athenian navy. “The wood for building warships, by and large, had to be imported, and the Athenians imported their wood from Macedonia” (Adkins). The early types of naval ships produced by Athens were operated by one mast and rows upon rows of sailors that used oars to power the ship. “These types of ships were mentioned by Homer: light, fast ships powered by 20 oars, and heavier warships powered by 50 oars. These 50-oared galleys were known as Pentekonters” (Adkins). The Athenians advanced from this by creating the biremes and triremes. These two types of ships added more rows of sailors to make the “vessels” more powerful and agile. As time passed Athens added more and more rows of sailors to these ships to protect its water from invaders and pirates. Later on in Athens’ history, the Persians attacked Greece with a fleet of 400 to 500 ships. However, the Greek Triremes, tremendously outnumbered, “proved” themselves against the great Persian navy and forced the Persians on a full-scale retreat back home (Williams). Athens continued to prove itself to be the leading city-state of success in Greece. They sustained their navy, continued to trade, and their harbor provided easy access for transportation. This all contributed to the prosperous city of Athen’s all because of the Mediterranean sea.

The Importance of a Nile River As a Water Source to Civilizations. (2021, Jun 16). Retrieved from https://studymoose.com/the-importance-of-a-nile-river-as-a-water-source-to-civilizations-essay 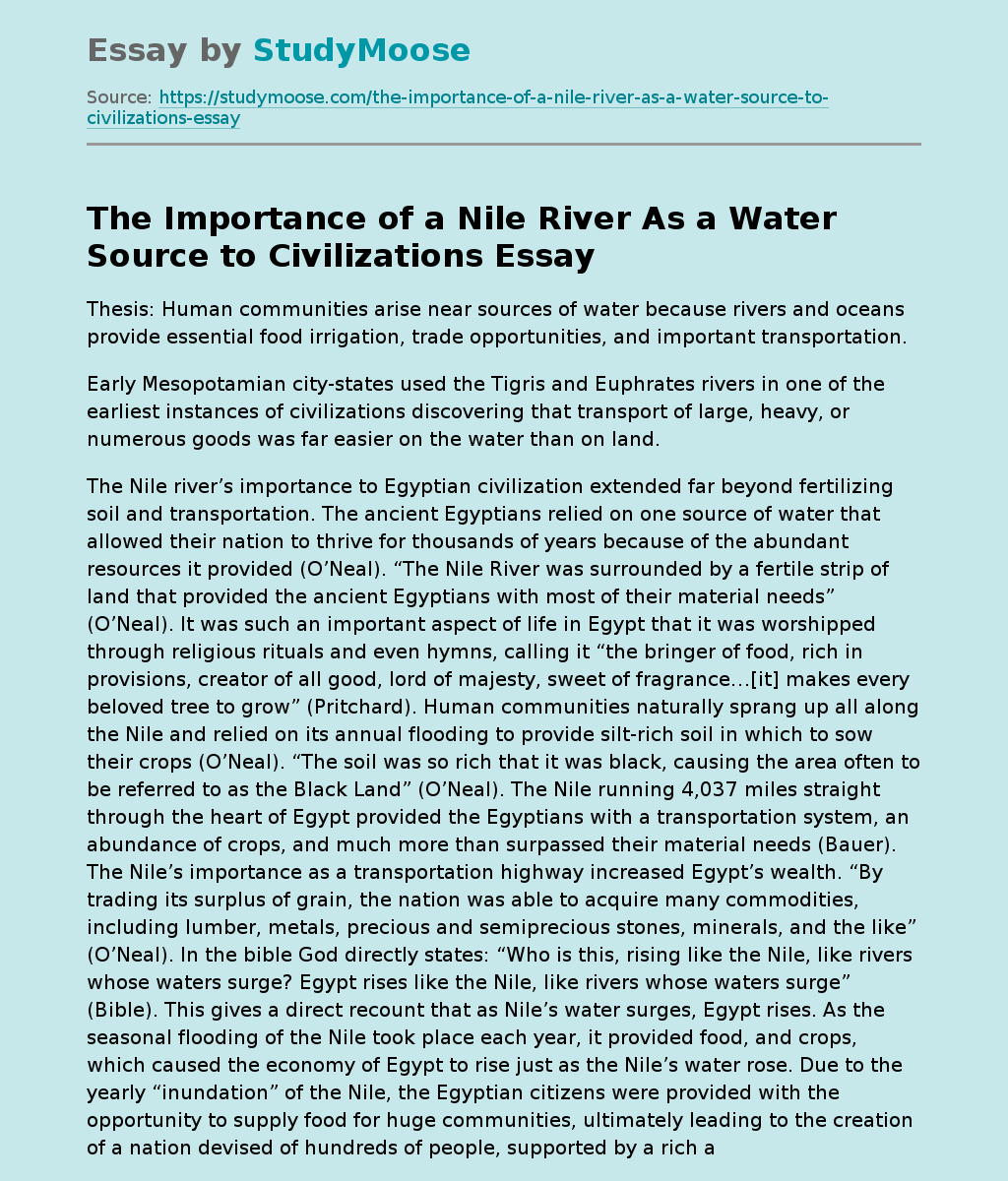