The Impact of African American Inventors

Whether we know it or not, black inventors have impacted our lives drastically. From the time we wake up, until we go back to sleep at night, we use at least one thing that has been made by an African- American inventor. Whether it is something as big as a traffic light or as little as a hair brush, black inventors have made major contributions to our everyday lives. Many people know about the big inventions, but both small and big inventions have impacted America.

Turn in your highest-quality paper
Get a qualified writer to help you with
“ The Impact of African American Inventors ”
Get high-quality paper
NEW! AI matching with writer

(Lund 2008) During slavery, most black slaves were denied proper education and many laws were passed in the South prohibiting slave literacy.

Even free blacks in the century before and after the Civil War were limited in their access to quality education and career training. This limited education and training meant that, in some way, blacks were shut out of professional occupations and limited to working in industries thought acceptable for them, such as house services and farming.

However, a small number of talented blacks were able to attain an education and, through their work, made major contributions to American life. (Imbornoni n. d. ) Unlike black slaves, free blacks prior to the Civil War were allowed to receive patents for their inventions.

But, once again, because blacks lacked educational and career opportunities, few had the necessary skills or experience to develop their creative ideas or patent them. Despite these restrictions, there were a number of successful black inventors whose inventions proved useful and important. Thomas Jennings, the first African American to receive a patent, used the money he earned from his invention to fund abolitionist foundations.

There were a few slaves, who were good builders, that created devices and techniques that benefited their owners’ enterprises. A decision was made by the federal government in 1858.

They said that neither the slave nor the slave owner could claim ownership rights to an invention. After the Civil War the U. S. patent laws were revised so that anyone, no matter what race, could receive a patent. As a result, the number of patents received African Americans rose drastically. By World War I, African Americans had left a permanent mark on the scientific, technological, and industrial development of the United States. (Imbornoni n. d. ) There are many inventions by African Americans that have contributed to the way that our nation is in the present day.

There are a lot of major inventions and inventors that we have learned about since we were little kids. For example, we have been taught that George Washington Carver invented peanut agricultural science and we know that Madame C. J. Walker invented cosmetics and hair products for black woman. But there are also a lot of inventors that we don’t know about. For example, Lonnie Johnson invented the Super Soaker and that George Crum invented the potato chip. No matter the size, big and small, inventions made by black people have had major effects on the world.

Some of the inventions of these African American scientists and engineers have had such a tremendous impact on American development that they have transformed whole industries. Even though all inventions by blacks have had some kind of impact on this world, there is one person whose invention sticks out among the rest. George Washington Carver probably had the biggest impact on the world. Think about when you eat a peanut butter sandwich or sum peanut butter crackers. You would not be able to do this without him. Every time you see something made out of a peanut you think of him.

He came up with more than 300 different ways to use peanuts. Carver devoted his whole life to researching something as little as a peanut to make a humongous contribution to the world. Another great inventor was Granville T. Woods, also known as the Black Edison. He invented many inventions throughout his lifetime. His inventions included the chicken egg incubator, automatic air brakes, and various improvements on railways, such as the steam boiler furnace. Even though he invented all of these things, Granville T. Woods dedicated his life to creating a range of inventions relating to the railroad industry.

He invented more than a dozen devices to improve electric railway cars and many more for controlling the flow of electricity. His most famous invention was an invention used to let the engineer know how close the train was to other trains which helped cut down many accidents on the train tracks. (Bellis n. d. ) Garret Morgan was also a great inventor whose invention had a major impact on the world. He had two major inventions in his life: the gas mask and the traffic light. Even though he has invented many things, Garret is known mostly for the traffic light.

Take a second and think about what driving would be like without lights to direct traffic at an intersection. There would be a whole lot of accidents every day. Because of this, the impact of his invention is felt by everyone in the world on a daily basis. You cannot drive anywhere, almost, without seeing a traffic light at least one time and, on top of that, they have saved so many lives. Another great inventor who had a very big impact, that most girls would be familiar with, is Madame C. J. Walker. Madame Walker revolutionized the hair care and cosmetics industry for African American women.

If it wasn’t for her some of the girls in the world today would look like they got in a fight with a hair dryer. Thank goodness for her major contributions. Another great African American inventor was named Otis Boykin. Otis was known as an electronic phenomenon. He was responsible and well known for the artificial heart stimulator, or pacemaker. Many families are impacted by his invention everyday in the United States because many people have to get pacemakers to live. Even though he is most known for that invention, he is also known for a couple more inventions. Otis invented more than two dozen electronic devices during his lifetime.

Even though those are probably the biggest inventions there are many more that we see every day. You could probably see about more than a dozen African American made inventions in one day. For example, if you were a business man/woman. When you wake up in the morning and your hair is all messed up you reach for a brush. This brush was an invention by Lydia Newman, a black woman. Then, when you go to eat or drink, you probably sit at the kitchen table. You wouldn’t be able to do this without the contributions made by H. A. Jackson. After that, most likely, you are on your way to work.

While you are on the road you will probably have to go through some traffic lights. These traffic lights were invented by Garrett Morgan in 1923 who also invented the gas mask 1914. If he had not strived to make these lights, automobiles might still be crashing into one another at intersections. Once you finally make it to the office you might have an office on the top floor. Alexander Miles made it possible for you to ride the elevator instead of walking up a lot of stairs. Once the whole day has passed and you are back at home, I’m sure you will need a light and of course that lamp will need a light bulb.

The lamp that you might use was invented by Michael C. Harvey and the light bulb by Lewis Latimer. Without the efforts of them, we might still be in the dark. All these inventions can be seen in one day and they are all made by African-Americans. These inventions are incredible and leave a mark on history (Lund 2008). Now that we know so much about black inventors we will know when we see an invention that has come from an African American inventor. We have to learn to appreciate the things that African American inventors have done because if it wasn’t for them the world would be a whole lot different.

What we have to see in this world is that it is not the style of clothes one wears or the color of one’s skin that counts. If you want it bad enough then you can succeed. Bibliography Bellis, Mary. About: Granville T. Woods. http://inventors. about. com/od/wstartinventors/a/GranvilleTWoods. htm (accessed December 12, 2009). Dr. Leonard Jeffries, Jr. Africa Within: The African Americans Search for Truth and Knowledge. http://www. africawithin. com/jeffries/aapart31. htm (accessed December 9, 2009). Imbornoni, Ann Marie. Info Please: Black Scientists & Inventors.

The Impact of African American Inventors. (2016, Dec 21). Retrieved from https://studymoose.com/the-impact-of-african-american-inventors-2-essay 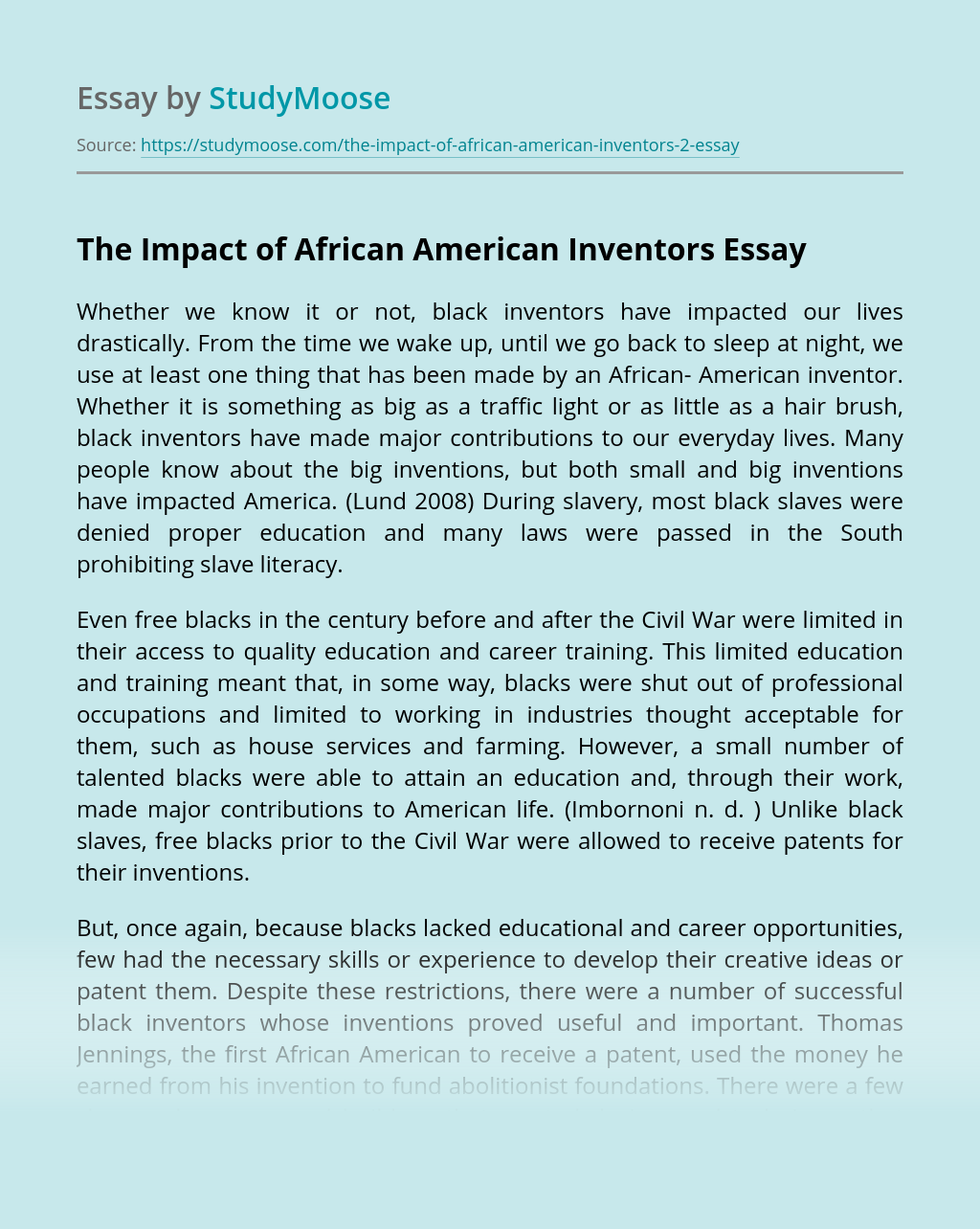 Turn in your highest-quality paper
Get a qualified writer to help you with
“ The Impact of African American Inventors ”
Get high-quality paper
Helping students since 2015
Stay Safe, Stay Original