Lois Tyson in the “African American Criticism” section of his famous book “Critical Theory Today” tried to make familiar the readers with the fundamental aspects of African American literary history. In this mission he explained different important and concerning factors which arise in the mind of the reader while reading the book. Actually to satisfy the need of the students who are ignorant or less knowledgeable about different major issues of African American History like the Great Migration, the Civil Rights movement, the Black Power Movement and many others, he wrote this book.

Don't use plagiarized sources. Get your custom essay on
“ African American Criticism ”
Get custom paper
NEW! smart matching with writer

Moreover he also pointed out the fact that then many African Americans were victims of internalized racism which “results from the psychological programming by which a racist society indoctrinates people of color to believe in white superiority” (Tyson 383). Mentioning some examples the author showed that this internalized racism sometimes led to intra-racial racism by giving birth to severe discriminations to the black people. This intra-racial racism had its own adverse effects on the socio economic structure of the Postcolonial American society.

Readers also come to know that apart from being the victims of both internalized racism and intra-racial racism which have devastating psychological effects among the African Americans, they also suffered from “economic hardship and social marginalization caused by institutionalized racism” (Tyson 383). The story also nicely portrays that how these African Americans experienced “double consciousness” or “double vision” in this Postcolonial American society. Actually they have to follow two different cultures.

The first is original black culture which is followed at the home and the other is European culture gifted by the white-skinned Americans which is followed at the school or college or workplace. This book also discusses the evolution of American literature and the influence of Afro centric literature on it. Critics often agree that most of the African American literature highlighted different sociological and political issues which greatly influence the lives of African Americans.

So far what we have discussed the different aspects of African American Criticism and the much awaited response which came into play to make this artifact a grand success and thus helping the African Americans to get a congenial and favorable environment to live in. Thus the book was able to portray the conditions of African Americans giving much importance to their history and criticized the whole thing with a positive attitude which left a deep impact on a large number of people. Works Cited Tyson, Lois. Critical Theory Today: A User-Friendly Guide. New York: Garland Publishing, Inc. , 1999. 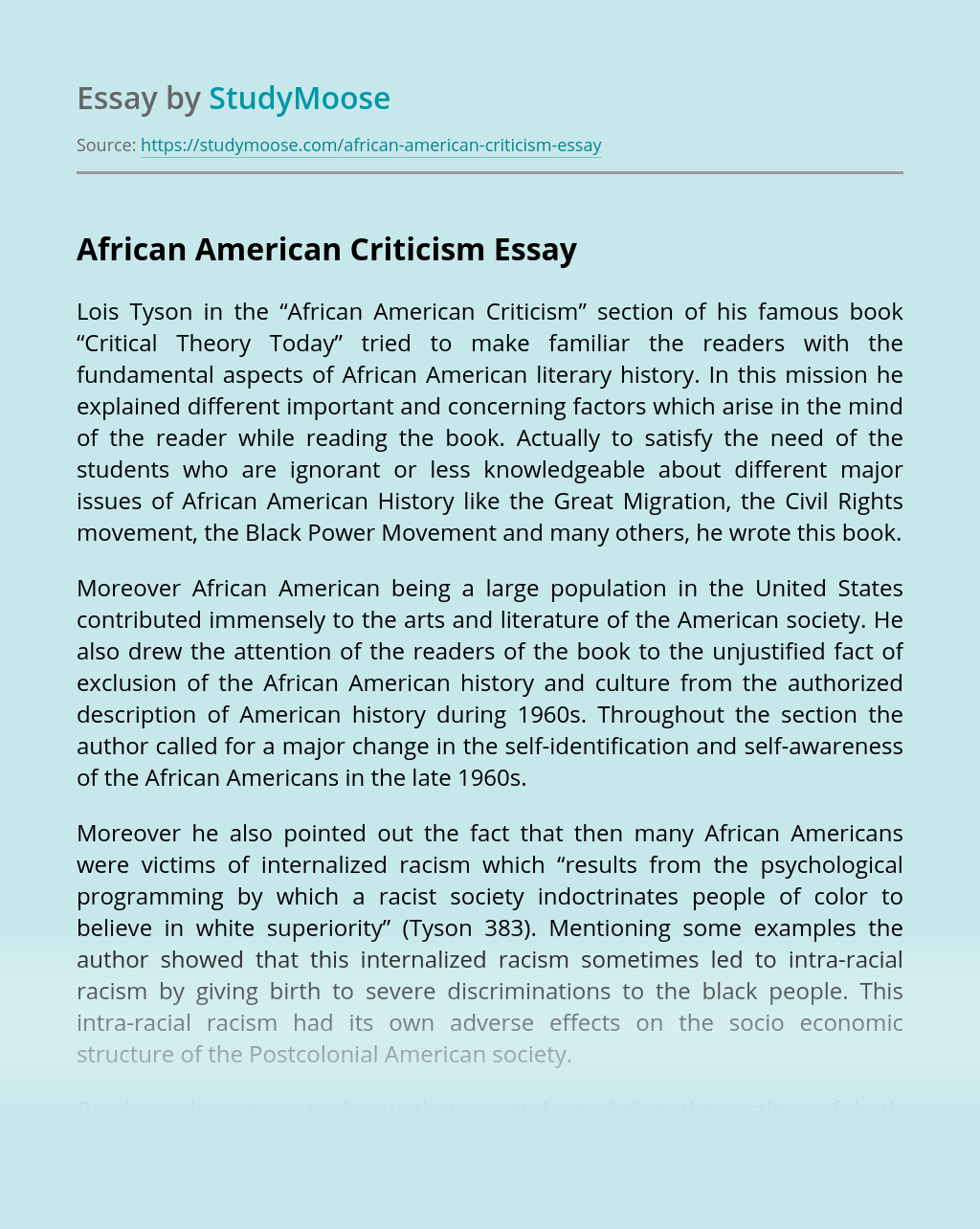