It was a stormy night, and the coffee shop was having an open-mic night for people to tell stories about them. I could feel the intensity of the storm, the lightning sounded like booming rockets. The day me and my friends got stuck outside I said looking at the crowd. It was just a normal Thursday, and I woke that day with confidence as I just finished my book report. It was the usual at home, I was dressed while grabbing my coat.

Don't use plagiarized sources. Get your custom essay on
“ The Hurricane ”
Get custom paper
NEW! smart matching with writer

I think I might need something more than just a coat, I said staring deep into the rain, like I was in a deep trance.

I grabbed a flashlight and walked out to the bus stop. The start of the day seemed like a normal summer day in Evanridge Oregon as it was always cool and wet during this time of the year. I could barely see the bus stop in the abundance of rain and fog, like one of those horror movies set at the summer camps.

The bus ride to school was rough and bumpy, the sound of rain hitting the windows felt like the beating of drums.

I walked out of the bus and stood at the entrance of Evanridge Junior High. I strolled into my English class and took my seat when we heard a voice over the intercom with a firm voice announcing, Teachers and students, we will be staying inside due to the storm’s intensity. We will be on lockdown for further notice, sorry for the inconvenience.

After those words were spoken, the intercom shut off.

Students sat in their chairs quitely for a moment as they took in the severity of the storm. It wasn’t a storm anymore, oh no, it’s a hurricane I pondered to myself. I continued this thought for what seemed like ages before I heard a scream from a girl.

We’re all gonna die! She screamed in a fit of dread, her face was pale, and she was shaky and jittery. A few of her friends went next to her and comforted her, she calmed down after a while.

Xavier, how do feel about this? I don’t know what to think of this, my friend Felix said while staring out of the window. He showed emotion while saying that phrase, like he was bothered by something.

Honestly, Felix, I’m worried but hopeful this Hurricane passes by. We’ll be alright. I stated while looking outside with him. The schools trash cans had been blown over with a few trees. I grabbed his arm and spoke She’ll be okay, Your mom will be okay.

Can you guys believe it? This isn’t a storm, its a hurricane. Aria said walking over to us in a bit of shock.

They said it’s going to be the worse one we’ve had since 1950 – She chuckled as she tried to stay hopeful.

Yeah, That just about confirms my feeling about this. Hopefully half the town doesn’t perish like it did that one day, – I responded in a joke. I grabbed Aria’s notebook and read a page from it I then looked at her and whispered Artemis? You like that guy?

She nodded and looked over at Felix – I think I might like your cousin, Felix. She then grabbed her notebook and hides it in her coat. Don’t touch my book, its mine and only mine she barked as she held up the brown hardcover book with girly stickers on it.

Art headed over to our little get to together, He took off his sunglasses and looks over at us “What’s with all the commotion? I could hear you guys from across oregon if I tried” He spoke with a subtle lisp.

Sorry for disturbing you art. Actually, I was wondering of we could speak in private – Aria asked Artemis while blushing

Art flipped his hair “Sure, wanna go talk near the door?” – He asked while grabbing her hand and leading her over there.

Felix made a face in grimace and said in envy “How come I can’t have the effect Artemis does on chicks? It’s totally unfair!” After he said that the bell rang for break

Looks like the storm has calmed down, you all shall report back here at the first sign of wind. The teacher said in a firm voice as he led the class outside to the P.E area. – You may do what you need, stretch, talk, bathroom, or get a drink of water if needed. He continued.

We all stood there in blatant disbelief that something so destructive looked so peaceful. Their were trash cans tipped over and arranged as it if it were a mosaic. The basketball hoop resembled a fallen white fir tree. The P.E equipment scattered around the place as it looked like their was a class that didn’t have time to tidy up. Suddenly, there was a subtle breeze, as the kids poured into the classroom like water into a jug. When I returned to class, my Aria and Art weren’t there, as if they were the invisible man. I stood there and looked around, as I ran out of the class like an olympian runner.

Aria! Aria, Where are you? – I walked around calling for her. The breeze was picking up, I knew the hurricane was coming back.

Have you seen Art? I’ve been looking for him for the longest time ever. – Felix questioned me as I walked over to him

I haven’t, I’m looking for Aria, but I haven’t had much luck looking for her. I responded to Felix. I was perplexed by their locations, but the question still emerged no matter how many times I tried hiding it. I found her books, the same classics are makeshift book club had been reading that week “The Outsiders and the Catcher in the rye” I said as I thought about it ” Why would these books be out here? Why aren’t they with her? She loves these books? I said aloud on accident.

Felix added ” Are you private eye now? C’mon, let’s go find them.” I followed him to the bleachers where they were, to which were surprisingly still standing, they also towered above us.

There was a banner blowing in the wind that read Go lions. We saw Aria and Art sitting there on the bleachers. Hey! We were supposed to go back to class a while ago – Felix yelled at them.

And? What’s that supposed to mean? – Art yelled back

We were to go back at the first sign of wind. Unless you guys wanna die by Hurricane. I shouted at Aria and Art. They seemed to nod and walked down the bleachers. We walked back to the class as the rain started back up as we all ran into the bathroom.

There is no way we’re going to make it to the classroom. We might as well stay in the bathroom until it clears. Aria suggested to the group. She then sat down and got out a book and read. Art brushed up on his jokes by telling cheesy jokes. Felix took out his phone and tried texting a friend.

The lines are down, Zero communication to anyone. Great, just what we all needed. Felix says putting the phone away. Maybe I could finish my book report on the magician. Xavier, lemme copy. He Asked me.

Felix was my best friend, so I reached and grabbed my papers out of my bag and handed them over. There, change a few thing so it isn’t obvious that you copied me. I said while sitting down. The bathrooms cement floor was hard, tough, and uncomfortable but it was manageable as we all sat there.

So. If we’re all gonna die anyone got any regrets? – Felix asked as he wrote on the form

Soo, Umm. I’ve always wanted to hangout with other girls, but..their terrible Aria shuttered as she looked up from her book.

I popped some little kids balloons, and he screamed so I blamed the dog. Felix says with a dreary tone.

Art seemed to be tired as he laid down on his backpack, using its firmness as a sturdy pillow. He seemed to be taking a nap, his nap was interrupted the rain stopped.

It stopped? But. What? How? Aria said puzzled as she stood up and opened the door. The sun’s bright light shines over the destruction. I stood up to looked outside, I was amazed as Phoenix Drop’s bustling streets were covered with fallen trees and flipped cars. Houses crumbled and The bell rang as Felix, Aria, Artemis and Me walked out of the campus and into the destruction.

I sat there on the stool with a melancholic expression on my face as I finished my story. There was an eruption of applauding that rang in my ear like I’ve gone deaf. I got up and sat back at my booth while the applause died and continue the night hearing the accounts of the others who have been through something like me.

The Hurricane. (2019, Dec 07). Retrieved from http://studymoose.com/the-hurricane-example-essay 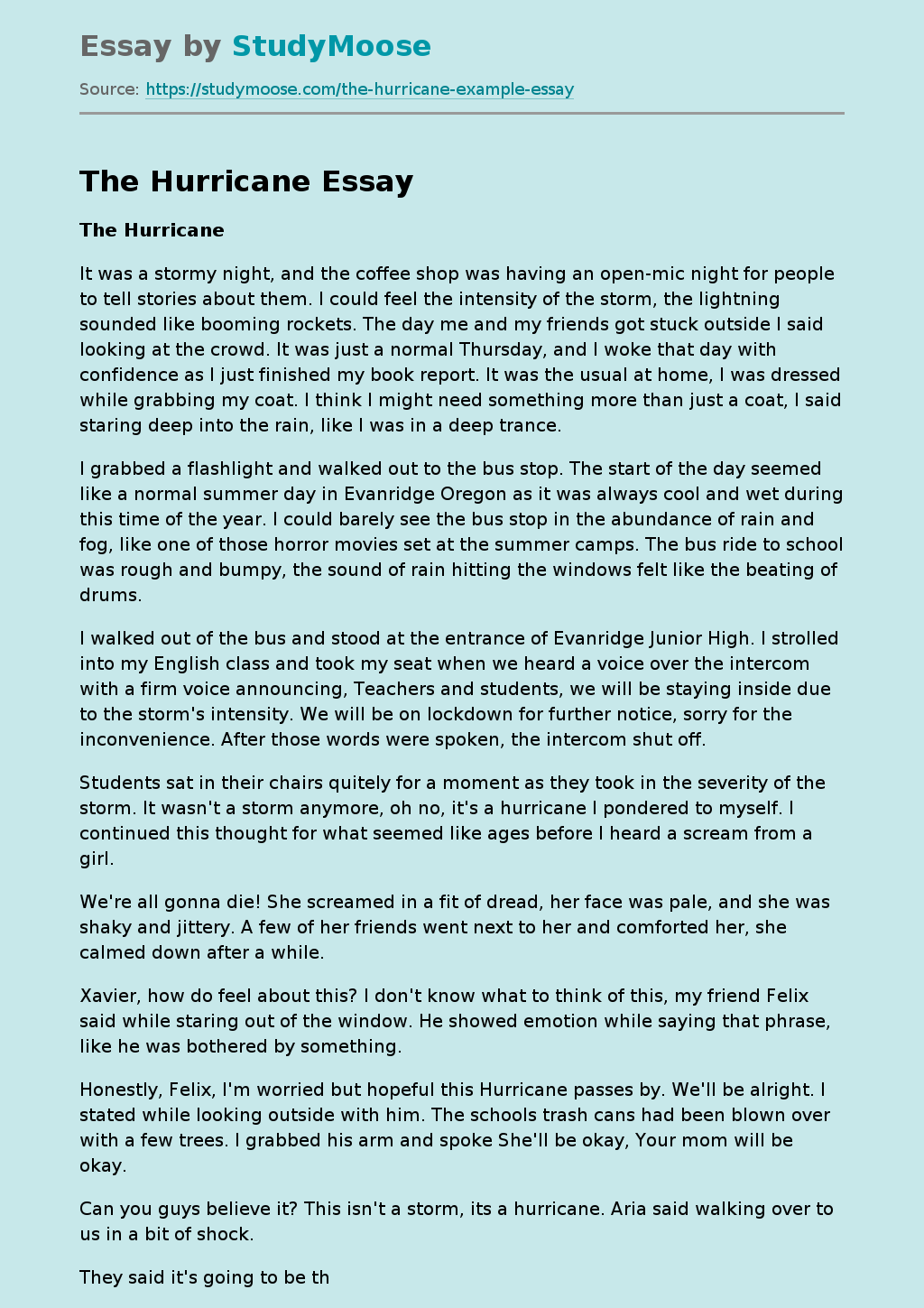