Night by Elie Wiesel and Night and Fog

During the times of war and catastrophe, there are two types of people. The people who will fight for their assured survival among others, and those who will give up and die with little to no hope. In Elie Wiesel’s nightmare of a novel, Night, shows how Wiesel, himself, the remarkable man who made it through the German ‘death camp’ as a child, faces these life-changing and extremely difficult decisions and struggles to make it through another day at the concentration camps during World War II.

Don't use plagiarized sources. Get your custom essay on
“ Night by Elie Wiesel and Night and Fog ”
Get custom paper
NEW! smart matching with writer

The Holocaust was a horrible cataclysm to say the least, that ravaged all across Europe, scaring countries, propagandizing fear and power within outsiders who weren’t of Germany’s ‘standard’, killing millions, in which all the Jews were bound together and ultimately fed to the flames in the end. Wiesel managed to be one of the luckier survivors in the end, but was he really lucky?

Before the event took place, and news got out that the Nazis would be arriving, some people would seek refuge within family friend’s, or neighbor’s houses, sheltering them from the brutality of Hitler’s new Germany.

Unfortunately, Wiesel’s father Schlomo, refused this opportunity of hiding with his family since he was the head of the very tight-knit Jewish community of Sighet, within Transylvania, in current day Poland. To Wiesel’s father, staying was his only option, and his main duty, to lead his people and give them strength through all the hardship. Schlomo had refused the offer from a friend from the family to hide in secret alongside them.

Unknowing to them, and the turn of events that happened so rapidly, within hours, hiding may have saved the lives of the rest of the Wiesel family if they had only known the outcome.

At the beginning of Wiesel’s narrative, Eliezer Wiesel declared that he profoundly believed in God. He had also became fascinated in what some may have called it, esoteric Kabbalistic works, which are the secrets of Jewish mysticism, something his father tried to talk him out of lots of times. Later on, he met a homeless man named Moishe the Beadle, who became a teacher for him, and they studied the Torah, the Kabbalah and the Talmud together. But on the fateful day that Moishe came back on a whim after being shot in the leg while being deported, narrowly escaping his death, he had returned in terror stood as a mark in Wiesel’s life forever.

He had come to tell Wiesel and the people of Sighet the news. And after that happened, everything changed so quickly. It appeared to Elie that Moishe had gone mad in the eyes of the people, exclaiming to the Sighet Jewish community that there were these horrible, inhumane tragedies that were soon to come for them. But it was to no avail, because everyone including even Elie refused to believe in him. There was no possible way anyone could imagine something so terrible was about to fall upon their normal, happy lives.

During their deportation, some families had already been torn apart. A Jewish woman that Wiesel’s family knew, Madame Schachter and her young son were travelling together, and were with Wiesel and his father in the same train cart. Madame Schachter’s son was about ten years old, according to Wiesel. The rest of their family, like Wiesel’s own, had been taken away in other carts, and only her son was with her. According to Wiesel, she was repeatedly asking nobody in particular why her family had been sent away, possibly in fits of hysterics, and later on she became even worse, and there were frequent moments of panic when she would shout, “Look! Look at this fire!”.

People would rush to look and there would be nothing in sight where where she pointing. After a while, people would become anxious, and infuriated with her lunacy that they would try to stop her from this madness by force. This happened so frequently that people had to fight back against her, holding her down and beating her up. This was so sad was that even Wiesel said: “Even said her little boy was crying, coming to her skirt, trying to hold her hand saying ‘It’s nothing mother! There’s nothing there. Please sit down.’ And this pained me even more than his mother’s cries” (Night, 2006, pg 25). These statements Madame Schachter made, were a bit of a foreshadowing to the crematoriums that were to come in the camp of Auschwitz, where countless people would be exterminated.

When Eliezer and his father arrived to the concentration camp in Auschwitz, the cruelty began. The German soldiers started off by whipping and beating them as all of them struggled to exit out of the traincarts, like they were livestock. Then, the officers begin to separate the families even more this time. It was the last time many of these people were going to ever see each other again. Eliezer repeatedly heard negative comments from prisoners who had arrived there days, or weeks earlier about how they would be expected to be treated. The new arriving prisoners were striped of what little clothes they had left on themselves and forced to get their new ID number, a 50 digit number tattooed on them, Eliezer being A-7713.

Next was the notorious Dr. Mengele, who was widely known for his horrific cruelty to his patients, and unfortunately, some of the newcomers to Auschwitz were likely to make this selection and be tortured relentlessly. The dentist who resided in the clinic would check all the prisoner’s mouths for gold teeth, and then would torture the prisoners to death. Because of this, Elizer wouldn’t ever forget the Nazis treated his people, and then and there began to lose hope.

Another very sad event was when Eliezer witnessed a father and a son who were killing each other over a piece of rationed bread. As being one of the many horrors of this death camp, Elizer, among many others began to lose faith in God. One moment, he even exclaimed: “Why should I bless His name? The eternal lord of the Universe, the all powerful and terrible was silent. What had I to thank him for?” (Night, 2006, pg 31).

Eliezer Wiesel watched countless Jewish victims fall to their own doom. And Wiesel became upset because there was no divine intervention from God to save His people. This didn’t make sense to him because why would some of his people pray to a God that wouldn’t come and save them, every waking moment, even to the moments they were led into the fire, shot or tortured to death.

Watching people die in the flames of the crematory had a huge impact on Eliezer the most, and these events would scar him forever. In Wiesel’s mind, he knew these Nazis were evil, what they were doing was inhumane, yet Wiesel felt a sense of despair and helplessness in his position, seeing as he was just a young boy and couldn’t do anything to protect anyone, only himself and his father. But he knew what the Nazis were doing was wrong on all measures of any scale.

Eliezer wasn’t the only one who began doubting God’s faith, because lots of the previously devout people began losing their minds, and rejecting their faith. In one point in the narrative, there was a very devout Rabbi from Poland, and this incredible man could recite the entire book of Talmud. Wiesel saw this Rabbi cripple and give up in his once former faith. Another victim was Akira Drummer, when he panicked and failed to make the Nazi officer’s selection.

I believe that though Eliezer began losing faith in God, the more it may have benefited for his own survival. Wiesel was able to think more rationally, and placed himself first in surviving instead of praying to the God he once loved and trusted, and would lose his mind in the process.

Within this novel, Wiesel and his father faces up to months, almost a year of starvation, and brutal oppression, to horrid living conditions and madness going on all around. He struggled much of the time not to fall into the chaos. He fought against his mind, his beliefs, his doubts, his intentions, his actions, and his fear to survive, along with his concern for his father’s safety. Since Wiesel’s other sisters and mother went another direction, had no other family to look after.

In the end, and Eliezer realized this later on his father passed away, is that after his father became so weak and sickly, after the two were sent to the clinic, Eliezer realized he was the only one who would be able to take care of and protect himself now. He realized how much of a burden his father had unintentionally been for him. After his father dies from dysentery, Eliezer felt a giant relief when he is taken away, as horrible as he thought it sounded to him.

The documentary Night And Fog, a French film from the 1950’s by the filmmaker Alain Resnais released the video of actual footage from the concentration camps that Nazis had filmed while torturing and killing these people. This black-and-white footage is uncut, and raw, with no processed shots. This film had a significant effect about what war can bring, and about violence itself. This, beyond other documentaries I have ever really seen, capture an actual event boldly stating that “War is really Hell”.

Though some of the black-and-white footage was still shots, the film footage of the hair that was cut and thrown into a huge mountain, and the piling of corpses was beyond anything anyone had ever seen. It’s one thing to read about something so horrific, and how much of a life-changing impact it had on not only Eliezer Wiesel, but to millions of people. To actually see the footage of it in front of your eyes, even if it was just a small glimpse of the past, is very heart-wrenching. It was clearly very wrong on any level of humanity, to carry out and do such things to these people.

The footage in Night and Fog really speaks for itself. It tells boldly on the brutality any human can possess, whether we want to believe this or not, and of how power, when abused can kill millions. In Elie Wiesel’s memoir book Night, it is shown that even through the hardest of times, never to give up and keep surviving. The characters also depict horrible mental, emotional, and physical abuse from the months they stayed in these camps, which very much would contribute to their fates.

While it is almost impossible to find out every single detail of the Holocaust, there are many diaries left behind, journals, photographs, films, interviews with survivors available by those who have been through this event and lived to tell the tale.

Night by Elie Wiesel and Night and Fog. (2021, Dec 02). Retrieved from https://studymoose.com/night-by-elie-wiesel-and-night-and-fog-essay 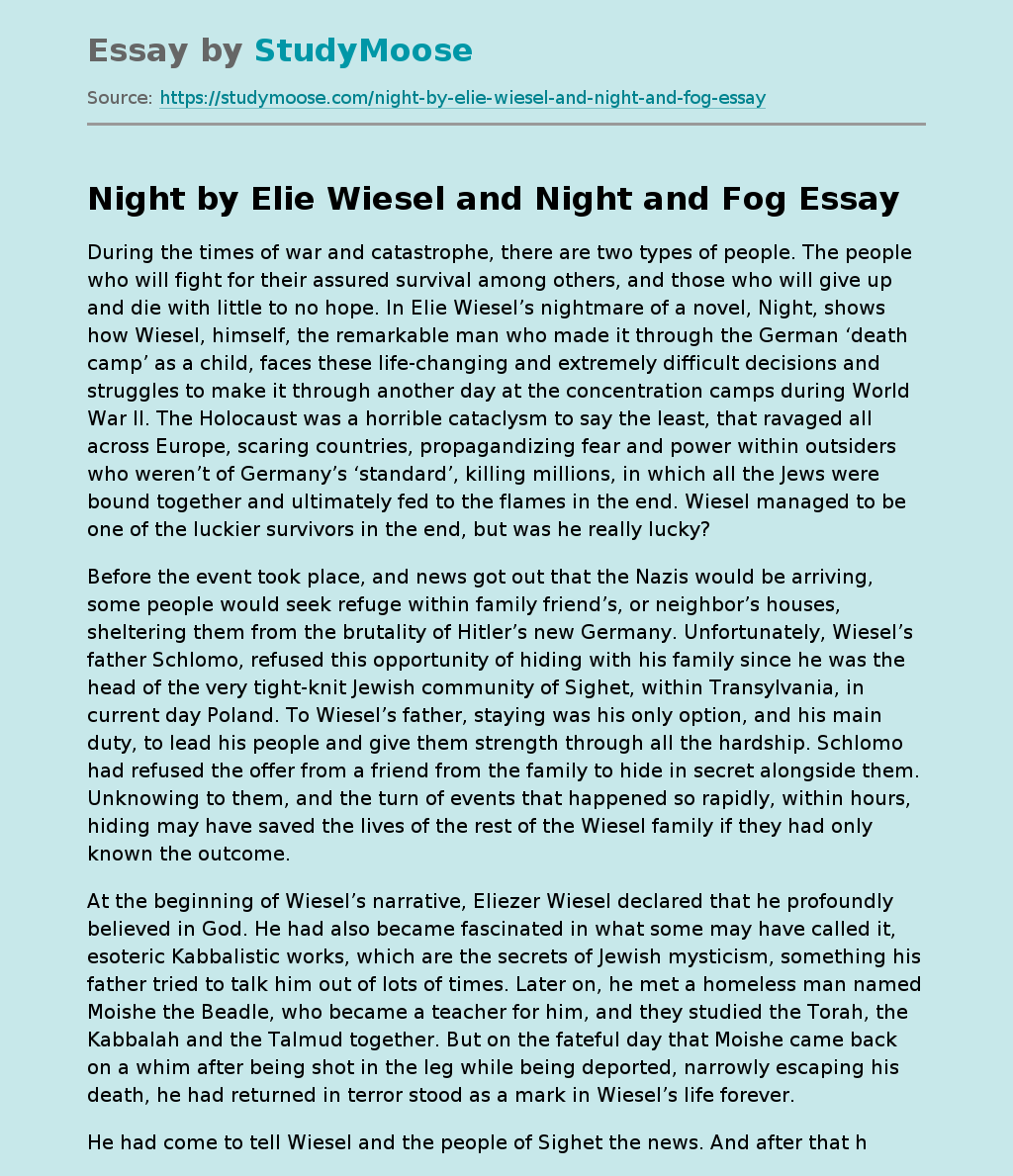