The effects of Hurricane Katrina that swept through the New Orleans State in August 2005 were devastating. Statistics show that more than 1. 5 million people were displaced by the hurricane (Sandhyarani, 2010). In addition more than 1,800 people lost their lives. The property damage caused by the hurricane was estimated to be more than US$96 million dollars. After the hurricane, many people opted to migrate from New Orleans due to several factors. There are five main push and pull factors that contributed to this immigration.

Don't use plagiarized sources. Get your custom essay on
“ Immigration from New Orleans after Hurricane Katrina ”
Get custom paper
NEW! smart matching with writer

Environmental factors: As a result of the hurricane, many residence of New Orleans opted to migrate to other locations. Many feared that there may be a reoccurrence of the hurricane and therefore they decided to look for a new location that has different environmental / weather conditions (Sandhyarani, 2010). Another factor that led to the immigration from New Orleans after the hurricane is the economic factor. Many business and offices were destroyed by the hurricane as a result many of the residents were rendered jobless and without a source of living.

Therefore most residents chose to move to another towns and cities in order to try and secure employment and be able to earn a decent living (Sandhyarani, 2010). Political factors greatly contributed to the immigration from New Orleans. The residents felt that the Bush administration neglected them during the hurricane; they felt that the rescue response was slow and discriminative – most attention was given to the white residents than the blacks. For this reason, most black resident opted to move to areas where there is less discrimination from the government of the day and where they could get equal justice (Sandhyarani, 2010).

The decline in the living conditions, poor housing, lack of education, poor health care and other social amenities caused by the hurricane contributed to the immigration from New Orleans. As a social factor, many people decided to go to alternative town where they could access these basic facilities that they needed for their day to day living. The impact of the hurricane also had emotional effects on some of the residents, due to this factor therefore some people decided to move from New Orleans to new locations in order to be able to overcome the trauma, have emotional stability, peace and start life a fresh (Sandhyarani, 2010).

Although the above push and pull factors greatly contributed to the immigration from New Orleans, there were some hindrances to the whole process. These factors included emotional, financial, legal, political and physical factors. 2. Question: Explain the difference between the primary, secondary, tertiary, and quaternary sectors of employment to someone in Junior High (7th and 8th grade, for example). How would you differentiate them? What sorts of jobs would fall into each category? Which job category do most Americans fall into?

Which category is going to be the “hot job” of the future put into, and why? In most American states, kids who attend junior high which is also referred to as middle school are between the ages of 11 and 14 years. At this stage, most kids are in the early stages of adolescents and therefore great care is needed when explaining to the kids the different aspects of life. When it comes to explaining the difference between the four major categories of employment, the use of relevant examples as a teaching aid is recommended. This will help the kids be able to understand the concept faster.

Primary employment is the lowest of the four categories (Kenessey, 2005), the jobs that fall under this category include; fishing, agriculture, forestry and mining. These are jobs that require minimal education. It is then followed by secondary employment, which mainly covers the areas of construction and manufacturing (Kenessey, 2005). The workers in this sector vary, there are those who have specialized training (engineers, designers and technicians) and those who have minimal education. Kenessey (2005) explains that the third category is the tertiary category.

The category covers employees in the fields of transport, retail trade as well as entertainment and food industry. Most of the employees in this category have average level of education although the sector does not pay very well. The final category is the quaternary category (Kenessey, 2005). This sector is also known as “white collar jobs’ sector”. It attracts high salary packages and allowances and the level of education required to secure such jobs is higher diploma, degree or masters’ degree. It covers the areas of banking, insurance, finance, education, public administration, and telecommunication and information technology fields.

Most Americans fall in the last category, the quaternary sector (Kenessey, 2005). The high level of academic qualifications set by various employers has made most Americans acquire higher diplomas and degrees in order to secure employment. As a result this has helped in the nation’s economic growth and development especially in the fields of information technology, science and telecommunication. The quaternary category is the one that is destined to attract more Americans for future employment; this is because of the new innovations and technologies that are being witnessed in the country. 3.

Question: Explain why the Earth’s population is rising so rapidly. A good answer will explain the four pieces of the Demographic Transition Model and how Demographic Momentum affects population growth, as well as explain why population changes as regionally as it is currently (for example, one some areas are experiencing population booms; others are declining in population). According to the UN (1999), the world’s population as at 1999 was estimated to be six billion. However by 2050 the population is expected to reach 8. 91 billion. The 21st Century has also witnessed the fastest population increase from 1.

65 billion to 6 billion; this reflects an annual population growth of 2% (UN 1999). On the same breath also there has been a steady but stable decline in the annual population growth from the 1960’s to date –2% in the 1960’s to the current 1. 5% per annum. This has been caused by a number of factors. Infertily is the one of the main reason. It is estimated that more than 50% of women in developed countries use contraceptives and this has slowed down the birth rate. The HIV/AIDS pandemic has greatly affected the population growth especially in Africa and Eastern Europe where it has been hard to control.

High birth rates can be caused by poor family planning methods, religion (children are a blessing from God) and the need of child labour. At the same time the high death rate is as a result of famine, diseases and war. A typical example of this is the current under developed 3rd world countries as well as Britain in the 18th Century (BFS 2010). The second is referred to as early expanding. During this stage the birth rate remains high but there is decline in the death rates. The reason for this is better health care, sanitation and hygiene in different countries in the world (BFS 2010).

The third stage is called late expanding stage where the birth and death rates decline as a result there is an increase in the population. This can be attributed to availability of family planning methods and changing living standards of both male and female (BFS 2010). The last stage of the population cycle is referred to as low fluctuating stage. At this stage, there is a steady population growth since the birth and death rates are low (BFS 2010). This is the reflection of the current situation in America and most nations around the globe. Reference

Immigration from New Orleans after Hurricane Katrina. (2021, May 18). Retrieved from http://studymoose.com/immigration-from-new-orleans-after-hurricane-katrina-essay 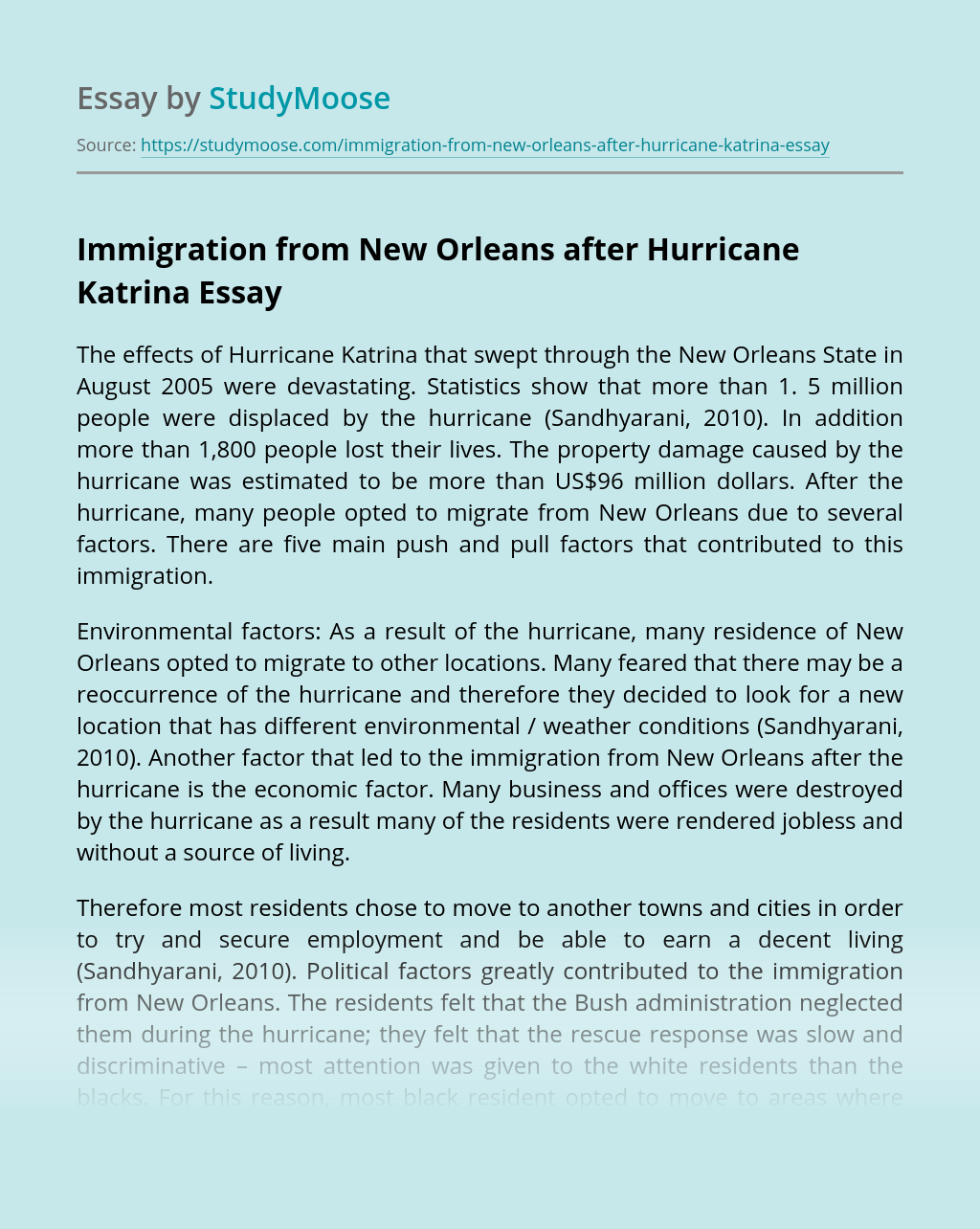