On August 29, 2008, Hurricane Katrina struck New Orleans, Louisiana with one of the most devastating natural disasters that America has ever come to face, taking the lives of over 1,800 people and leaving behind billions of dollars in property damage. Through this research, I would like to seek a deeper understanding of the role social systems played in impacting the lives of the most underprivileged people in our society during a catastrophic event. A few days before Hurricane Katrina landed on the U.

Don't use plagiarized sources. Get your custom essay on
“ The Political Economy of Hurricane Katrina Recovery ”
Get custom paper
NEW! smart matching with writer

S. Gulf Coast, the National Hurricane Center issued a warning that a storm was progressing toward Louisiana and that it was rapidly strengthening. Yet, it wasn’t until five days after the National Hurricane Center issued its warning did former New Orleans mayor Ray Nagin call for a city-wide evacuation. Panic ensued when highways became congested as the city’s residents rushed to steer clear of the category-5 storm.

Thousands of citizens were unfortunately left behind to face the ramifications of poorly constructed levees that were supposed to prevent floodwaters from entering the city.

These citizens, the impoverished and the minorities, were unable to leave the city but were able to find refuge in the Superdome stadium. According to the article posted by The Guardian (2015), “Four years on, Katrina remains cursed by rumour, cliche, lies and racism”, media claims of looting, rapes, and murders occurring in the vicinity painted the victims as criminals and it sparked a sense of fear in the nation. As a result, the government prevented supplies and rescuers from entering and victims were kept from leaving.

New Orleans was treated with hostility by government and city officials, and the general public turned their backs on those who needed their help. Failure of disaster preparedness coupled with local, state, and federal neglect of disadvantaged communities turned a natural disaster into a social catastrophe, which led to numerous deaths that could have been prevented.

Though nearly a decade and a half has passed since the tragedy, the negative implications of the storm continue to hold captive many victims of Hurricane Katrina. After reading the news article, it has become clear to me that the impact of the hurricane was maximized due to societal responses. The racial and class divisions in the city of New Orleans served as a pivotal factor in determining which populations would receive the greatest damage and which would receive the most assistance. I believe that this is an important issue because the events that occurred in New Orleans reflect a systemic issue that resulted from a history of racism and it continues to preside in cities throughout the entire nation. Low-income, minority communities are ostracized in society and the media portrayal of black people as criminals during Katrina is an occurrence that can still be seen today. Way too often are poor people of color put on the back burner in society, and when in times of dire emergency, they are left completely vulnerable to the consequences of disaster. Social systems group individuals based on their socioeconomic status, and during disaster, the class to which you belong directly determines the amount of relief you will receive. These categorizations open a gateway for the destruction of communities and it poses a threat for long-term recovery of victims. If and when another natural disaster occurs, it is crucial that all of America acknowledge the mistakes that were made during Hurricane Katrina to ensure that no person will ever get left behind.

Thousands of low-income individuals lost their homes, their jobs, and their social networks because of Hurricane Katrina. What assistance did the federal government or the city offer in in terms of long-term rehabilitation of the victims and did it prove to be effective amongst the different classes of citizens? How does the social system affect storm victims in the long run? How did the general public respond to the victims and how did it impact the victims’ return to normalcy?

This article helps me understand how the human response to disaster is directly shaped from racial and class differences. A timeline is established to shed light on the legacy of slavery and history of racial and class segregation. A study was conducted to examine response through the perspective of survivors, and the study found that most of the victims who were left stranded during the flooding never evacuated because they lacked access to transportation and were unable to locate shelter. The study also found that when comparing white and black workers after the storm, racial differences greatly impacts job security as more black workers lost their jobs than white workers.

This article helps to explain the relationship between the social system and the federal government by looking at the repercussions of Hurricane Katrina. Government shortcomings caused numerous complications regarding the evacuation of citizens as many low-income citizens say that the evacuation notice was not communicated to the poor areas of the city.

The article uses the System Justification theory, a theory that states that people are likely to accept societal status quo, to examine the positive and negative effects of the social system in regards to Katrina. It examines the responses of both the citizens of New Orleans and the general public and how it threatened long-term recovery for storm victims.

This article shows all of the risks that the low-income citizens of New Orleans faced before the impact of Katrina, such as extreme poverty, inability to access adequate healthcare, and lack of adequate education, and how their risks sustained after the storm. The contents of this research helped me obtain a deeper understanding of the how vulnerable low-income citizens actually are after a disaster like Hurricane Katrina. The article looks at the social safety net and the problems that it created due to the effects of the storm. It examines evacuation methods, the process of finding shelter, and how life was like for the displaced victims in new communities.

This article focuses on the challenges of long-term recovery for storm victims by examining the population of the New Orleans metropolitan area, the population of the citizens who were displaced, minority citizens, and white citizens. This article also provides data on the relationship between uneven population and housing recovery of the low-income and upper-class communities in New Orleans. Overall, this article helped me see the disproportionate recovery of different populations caused by unequal federal assistance.

This article looks at the repopulation trends and recovery patterns of New Orleans several years after Hurricane Katrina took place. Following the storm, minority and low-income communities experienced low repopulation rates compared to their upper-class counterparts and this article highlights the factors that caused this inconsistency. It notes that during the storm, these impoverished communities sustained the greatest overall damage, but after the storm, poor management of federal financial assistance programs resulted in funds mainly being allocated based on wealth rather than need. This article helps to explain how pre-existing divisions of class contributed to the hindering of certain victims’ ability to fully rehabilitate from their losses. 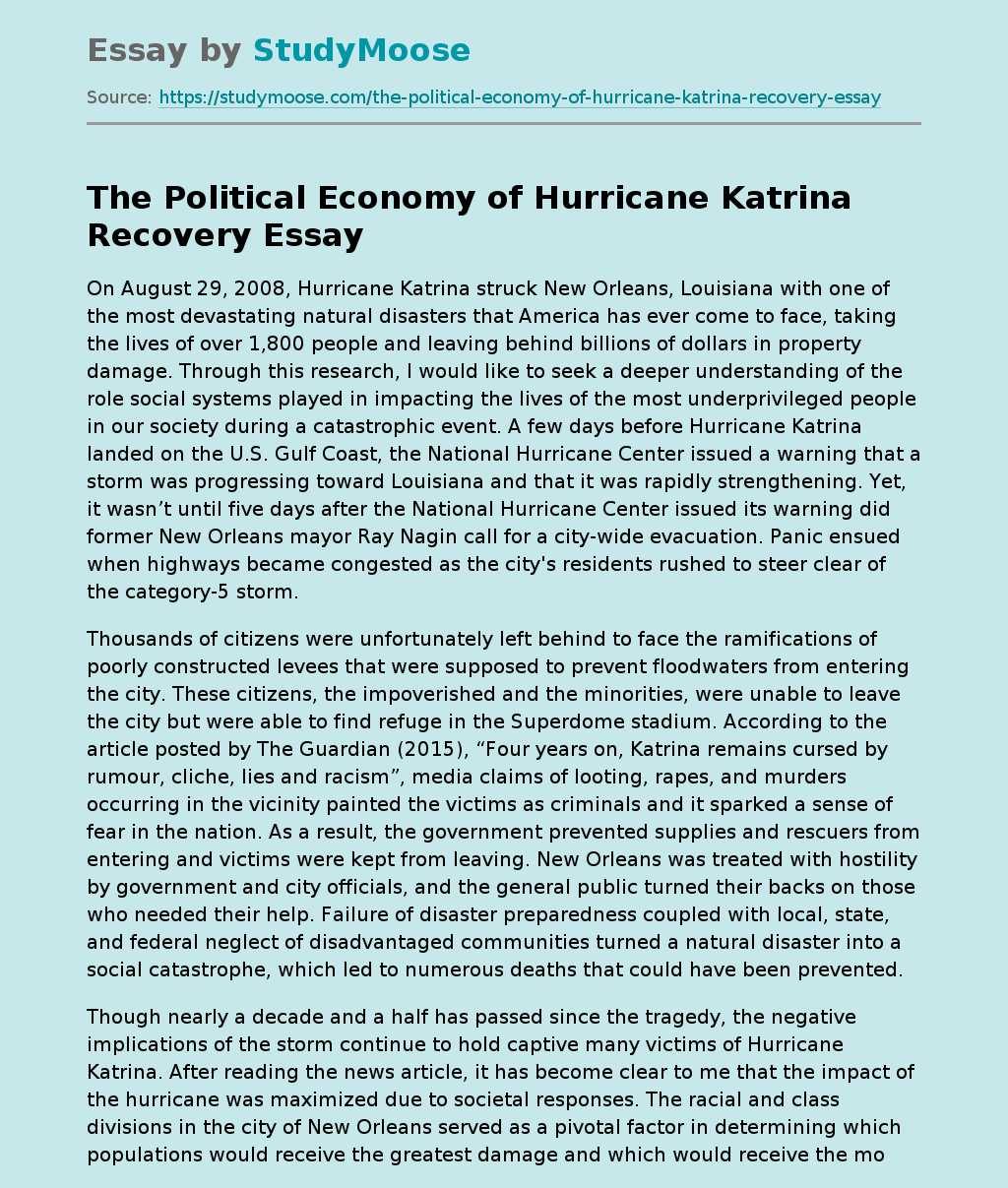