In august 2005, the State of Louisiana was hit with one of the most devastating natural disasters the United States has ever seen. New Orleans specifically was among the cities who felt the full force of Hurricane Katrina. While the storm itself was very powerful the damage wasn’t caused necessarily by the hurricane but by the failure in the levee system. According to Jennifer Trevedi, In the book, Encyclopedia of Disaster, Jennifer Trevedi describes the extent of the damage through breaches of the levee.

Trevedi says, the levees were breached in over fifty different spots flooding the St. Bernard and Plaquemine parish. Some of the most significant breaches occurred at the Industrial Canal, the 17th Street Canal, and the London canal (322-325). Once the initial shock of the situation subsided, people wanted answers.

Why did the levees fail? Who was responsible for this catastrophic mistake? Initially the U.S Army Corps of Engineers (Corps) who was put in charge of the construction of the levee system took the blame.

But, after further research on the topic I’ve found that yes, the Corps took part in the breaching of the levees but prior to Hurricane Katrina the corps dealt with a tremendous amount of local, state, and federal stipulations that affected them in their attempt to build a safe and secure levee system. With this in mind the Corps cannot be found completely responsible for the disaster that occurred in the city of New Orleans.

Why do some blame the corps

After hurricane Katrina struck the city was destroyed. The residents of New Orleans had lost practically everything. Most of the devastation happened in the poorer parts of the city with a predominantly African American population. Everyone was angry with how little effort was put into the evacuation of the low income areas and many people who had pre-determined that the levee failure was the fault of the Corps compared the two situations. In the essay by John White called “the Persistence Of Race Politics And The Restraint Of Recovery In Katrinas’s Wake,” published in the book “After The Storm,” White talks about the comparison between discussions of race and arguments about the blame for the damage from Katrina. “Set in symbolic terms, the discussion of race and Katrina takes on the Same tone as arguments that Louisiana built inadequate levees (it did not, as the Army Corps of Engineers Designed and built the Levees) or that the levees were dynamited (true during the Great Flood of 1929, but unsupported today)” (43).

The African American community of New Orleans felt because they were poor, and black they were interpreted as if they were to blame for not leaving prior to the storm hitting the city. Just like the Corps was to blame because people misinterpret their responsibility in the overall decision making in the building of the flood control system. The problems with the levees goes back to another storm that caused a lot of damage. According to J.D Rogers In the article “Development of the New Orleans Flood Protection System prior to Hurricane Katrina,” the U.S Army Corps of Engineers took on more responsibility for the building of the hurricane protection system after Hurricane Betsy.

However, because of the growing population of New Orleans and constant lawsuits involving different ideas of how the levees were to be built, the Corps never were able to properly complete the flood protection plan (616). While the construction and design of the flood control system was part of the Corps responsibility, they never really had control of putting their plan into effect because of constant disagreements between different agencies.

In addition, the article “Overview of New Orleans Levee Failures: Lessons Learned and Their Impact on National Levee Design and Assessment,” G.L. sills, et al. the authors write about how the Corps was sued because of different opinions on how the flood protection system should be designed after Hurricane Betsy, saying, “with the effects of the storm still lingering, the Corps was sued over the authorize hurricane protection plan” (557). While the Corps came up with a design they thought would be able to protect the city of New Orleans they were subject to constant legal obstacles that restricted them from achieving their overall goal of protecting the people from a disaster like Hurricane Betsy.

In fact the city of New Orleans wasn’t the only place where the Corps had problems trying to get their design pushed through. In Jim Yardley’s “Battle Beside the Levee: Hold Back Big Muddy or Let It Roll,” written in the New York Times, Yardley talks about the Mississippi Delta and the U.S. Army Corps of Engineers desire to build the levee strength up before there is a flood that would ruin the farmland. However, environmentalist are fighting the U.S. Army Corps of Engineers, stating that the land that is used for cotton farming would have better use if it was returned to its natural state as a wetland (3, 4). While the local farmers are in favor of the Corps building the levees strength up to protect their cotton farming, environmentalist are stalling the Corps efforts because they want the area to be returned to its natural state as a wetland.

So while government agencies can stall the process of building levees up there are also many different organizations that have their own idea of what is best for the area where the levees will be built. The environmentalist surely have valid points to why the levees shouldn’t be built but when a natural disaster hits everyone will immediately put blame on the Corps instead of looking at the fact they were kept away from doing their job due to an outside source. This is also seen in In Andrew Revkin’s “Lost Chances to Avert a Disaster; Competing Interests Stalled New Jersey Flood Project,” written in the New York Times on September 26 1999, Revkins talks about how over a dozen communities in New Jersey were susceptible to floods. The U.S. Army Corps of Engineers came up with multiple plans over a 30 year period. but, because Federal, State, and Local agencies had different ideas of what was the best plan the U.S. Army Corps of Engineers were left in a stalemate (3,4).

Whether it’s the State of Louisiana or others the Corps have been under constant push back because everyone involved in the planning of the levee system has different ideas of the safiest and most beneficial design for the area. Unfortunately not every design is going to benefit all parties involved. While a dozen communities are involved in the decision making of how to build the levees so every town will have maximum protection the Corps is put in a situation where with so many people involved they cant get much accomplished. And, when a disaster happens everyone points the finger at the Corps which isn’t right considering the constant push back from other sources. History has shown that the Corps has to deal with outside sources when they make a decision to build the levee system up. In Karen O’Neill’s essay “Broken Levees, Broken Lives, and a Broken Nation after Hurricane Katrina,” she tells us that the development of the rivers does not fall under the authority of a single entity. Different federal bodies, plus state and local governments, all have some degree of influence in the direction of levee maintenance.

This has the effect of spreading the responsibility and makes it impossible to assess full blame to any one of them (99). No one expected a natural disaster like Hurricane Katrina to cause so much damage to the United States. It forced our leaders to take a good hard look at how prepared we are for a disaster situation. In McGarity and Douglas Kysar’s “Did Nepa Drown New Orleans? The Levees, The Blame Game, and the Hazards of Hindsight,” they discuss the different reasons for the breach of the levees. The authors determine that no matter how much planning was involved in the construction of the levee system by the Corps, that the Corps specifically can’t be put to blame. However, more time should be put into research of future disasters to allow the people in charge and residents of a disaster area to make a more educated decision on whether to stay or relocate (43). It is easy for people to put blame on the Corps because they are the designers of the levees.

But, the people who decide to build homes in a known flood area need to take responsibility for their decision and actively seek information on future plans to keep them safe from future floods. The Corps can only do so much and it is everyone’s responsibility to make sure they know what is happening within their community. Whether you put the blame on the Corps of Engineers the organizations that prevented the Corps from properly building the levees the way they wanted to originally or the people who The Corps of Engineers made mistakes in not securing the levees just in case there was a flood of this magnitude.

But, when the corps had multiple plans and designs over the years and they were unable to execute them because of different agencies stepping in it makes the job that much harder. Hopefully Katrina will show all agencies involved that regardless of conflicting opinions all parties involved need to come together and do what’s best for the people that live in a disaster zone. No one entity can completely eliminate a disaster but if we work together we can possibly help make sure the damage is less.

Rogers J.D. “Development of the New Orleans Flood Protection System prior to Hurricane 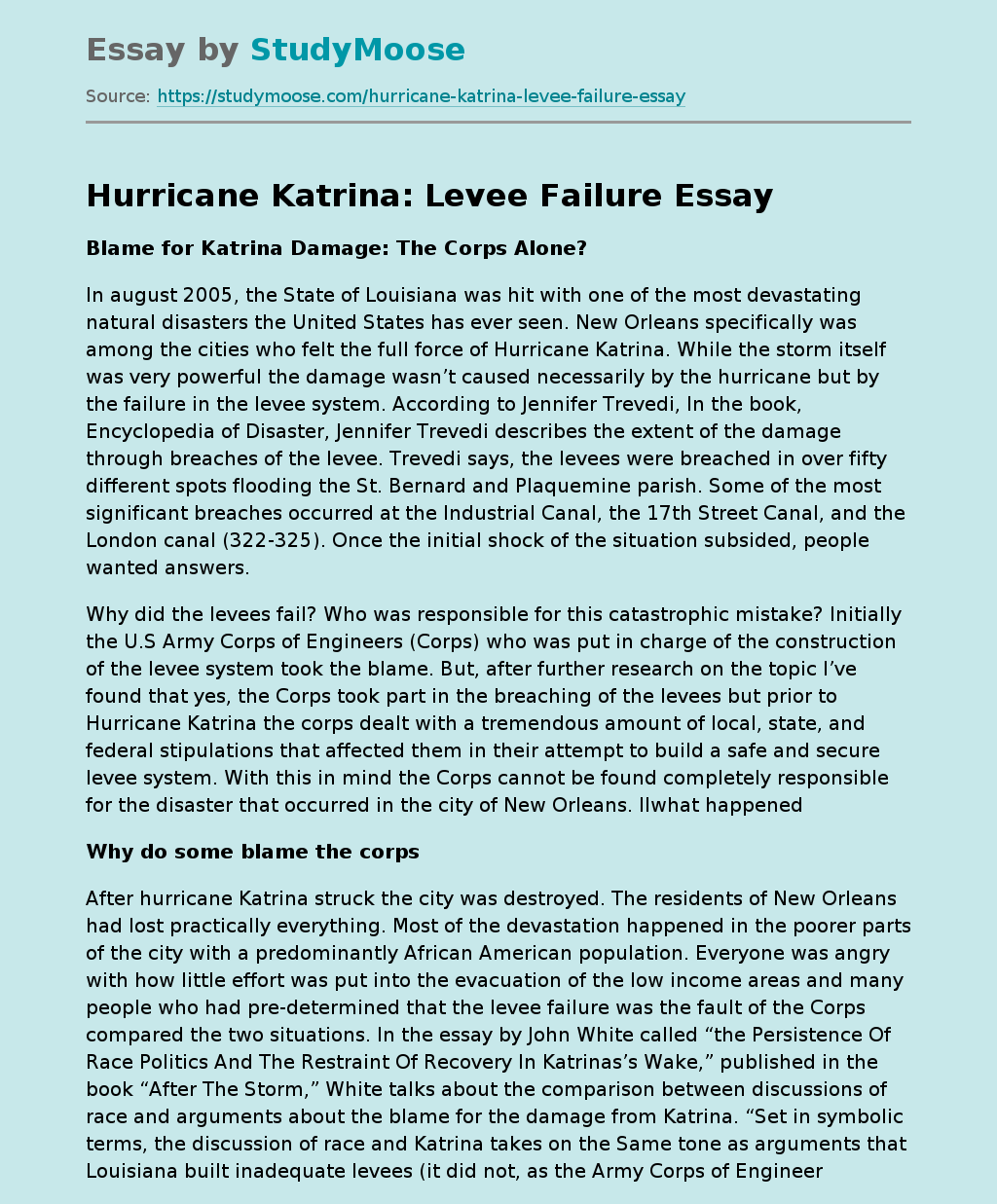