Hurricane Katrina: Challenges for the Community

Don't use plagiarized sources. Get your custom essay on
“ Hurricane Katrina: Challenges for the Community ”
Get custom paper
NEW! smart matching with writer

Victims claimed that the federal government of the United States was late and should have taken action earlier. The estimated damage was around 100 billion dollars approximately and the economy of the country suffered a lot because of the storm.

This was the 3rd largest Hurricane affected the United States. But sooner it took fifth place. The wind speed reached 175 mph and 1836 number of people died due to this Hurricane from Louisiana and Mississippi.

The majority of them were elder citizens. The storm height was 20 feet and affected the population of a total of 15 million. The United States received large amounts of funds from other countries because of the damage caused by Katrina Hurricane. These countries were China, Pakistan, Qatar, Bangladesh, and India. (Kates, 2006)

This was the 3rd largest Hurricane affected the United States. But sooner it took fifth place. The wind speed reached 175 mph and 1836 number of people died due to this Hurricane from Louisiana and Mississippi. The majority of them were elder citizens. The storm height was 20 feet and affected the population of a total of 15 million. The United States received large amounts of funds from other countries because of the damage caused by Katrina Hurricane. These countries were China, Pakistan, Qatar, Bangladesh, and India. (Kates, 2006)

This storm was started on 23rd August 2005 in the Southeast Bahamas. The clouds of the storm began to wrap together and started a huge storm and it was named Katrina. The storm started to move toward Florida on August 25th and the category of the storm was high. After that, its effect lowered on Florida. But again the speed was increased suddenly.

The attempt of rescuing the people during and after the storm Katrina was not sufficient and was highly criticized. The local and federal states did not try to rescue people, but blamed the federal government for not providing support at the right time and not warning people about the storm. Due to this many people protested that they did not know of the storm and did not receive time to prepare. The emergency management agency was prompt to handle the disaster. A post of warning was made on their page one day before the disaster. After a decade, this disaster listed as a natural disaster. There was no doubt that this was a natural disaster, but the damage of the disaster was increased because the government was unable to inform the people regarding this storm and also unable to issue assistance at the right time to rescue people.

The disaster caused by Katrina happened due to the engineering methods. The Army Corps of Engineers presented that it was their failure to protect the city. Currently, the United States spends an amount of 5 billion dollars to build walls with more strength to hold the storm pressure. The authorities blamed on each other rather than helping the victims who were affected. Army corps besides spending a lot on the cities which were affected have invested in the cities which have not been affected but are expected to suffer. The federal emergency management agency alongside both local and federal government were both responsible for the Katrina storm. The local government was unable to inform all residents regarding this storm and the federal government was unable to provide support at the right time to save people from this storm. (Kathleen Tierney, 2006)

Hurricane Katrina was one of the worst floods to affect the United States. The management during the storm was not an easy task but it would have been managed if the United States government functioned properly and not contested against each other. The president in 2005 was George Bush and at that time when the flood hit, people claimed that the government didn’t handle this situation professionally. The local and federal governments were too busy blaming each other and were not able to deliver aid to the affected citizens. After this event, most of the higher authorities were removed from their seats and new appointments were made. The disaster was classed as a natural disaster but government officials acted like petrol which was fueling the fire. The government raised the disaster rate rather than decreasing it which is what caused this natural disaster to be thought of as a man-made disaster. There was a lot of inequality at that time. The poor people suffered a lot more than the rich people and amongst these poor people mainly were people of a different races. The disaster caused damage of over 100 billion dollars and large amounts of money were donated by different countries. The major fault found from the case was the unprincipled United States officials and the defective engineering of the city. The city engineering was not too high standards which could handle a storm or any situation like this.

Hurricane Katrina: Challenges for the Community. (2020, Sep 27). Retrieved from http://studymoose.com/hurricane-katrina-challenges-for-the-community-essay 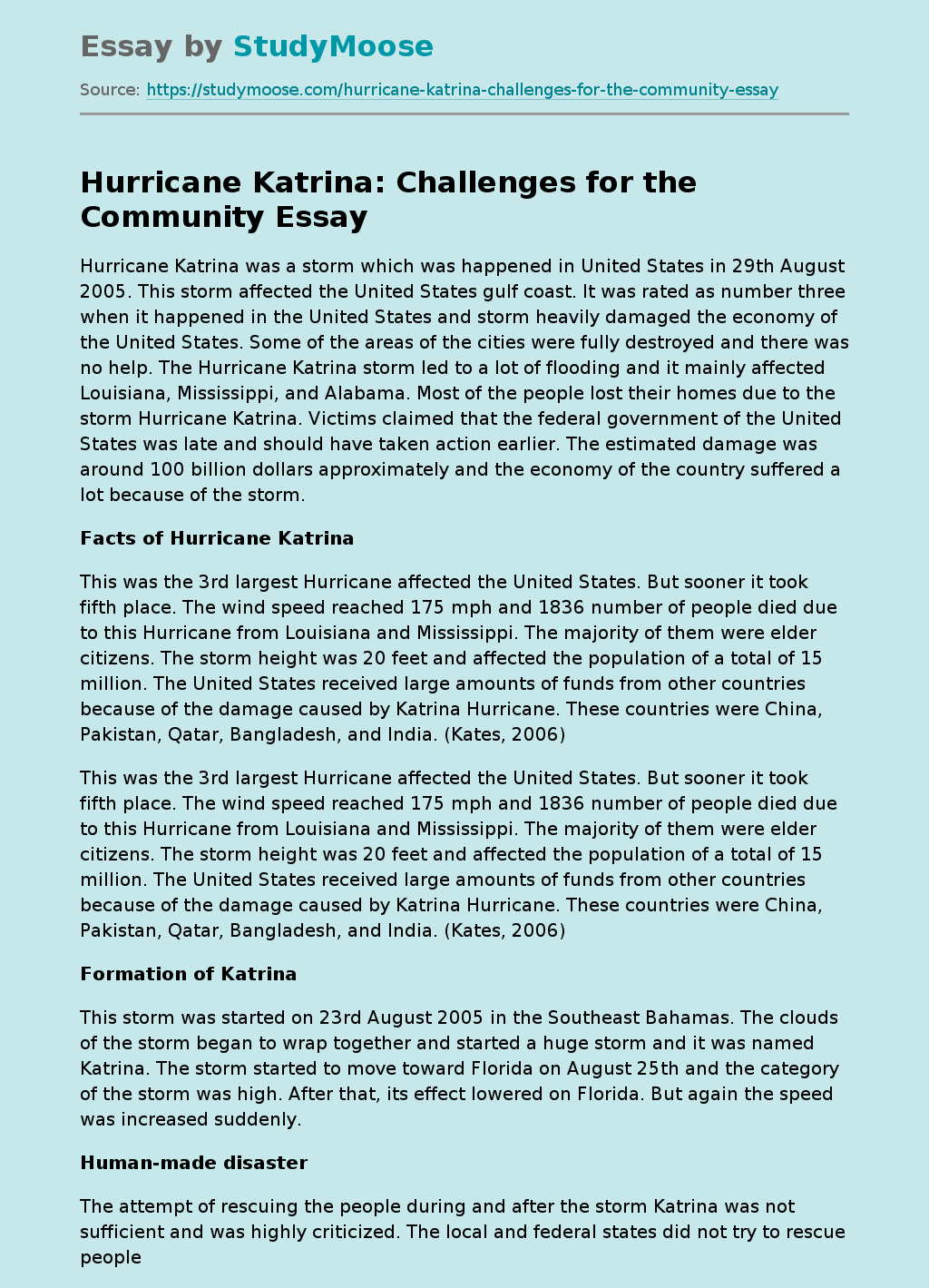