The Federal Response to Hurricane Katrina

Natural disasters result in destructive and life-changing consequences for those affected. Hurricane Katrina was a category-five storm that altered the way society and the government view and combats dangerous disasters. The lack of effective emergency response and nationwide support prolonged the distress of Hurricane Katrina victims. The news media is responsible for this large amount of confusion and failed efforts. There was a discoordination between the various levels of government, prejudice against minorities, and stereotyping those living amongst poverty. The new media coverage of Hurricane Katrina resulted in insensitive and ineffective consequences that only worsened the suffering of Hurricane Katrina.

Don't use plagiarized sources. Get your custom essay on
“ The Federal Response to Hurricane Katrina ”
Get custom paper
NEW! smart matching with writer

These actions are not always completed in a civilized fashion. New reporters are instructed to always receive an answer or opinion out of an individual (Miller & Goidel, 2009). Once there is an expanding desire to learn more about a natural disaster, journalists and new reporters compete and focus on possible news headlines that will shock or appeal to the masses (Miller & Goidel, 2009). As a result, rather than have the news media help supply accurate information, it complicated the relief and emergency response efforts.

New media organizations and journalists additionally depend on government sources of information (Miller & Goidel, 2009); this can lead to too much trust and reliance amongst the higher levels of government for details of how the emergency response will be completed.

The inaccurately of media reporting began once journalists sought out individuals who were giving their own opinions and what they were hearing (Miller & Goidel, 2009); therefore creating a large scale game of “telephone”.

Hurricane Katrina victims that were unable to evacuate became examples of how staggered and ineffective response efforts can be because of how they are inappropriately perceived by the new media (Mcmanus & Saucier, 2012). Minorities and those living in poverty are seen and placed at an even greater disadvantage during times of natural disasters (Schmidlin, 2006). Although many residents did depart the city of New Orleans because of the emergency evacuation, individuals who did not have the means to leave were placed at a further disadvantage (Garfield, 2007). More than half of New Orleans (57%) did not have private transportation (cars) in order to evacuate the city (Garfield, 2007). Evacuations can be strenuous for anyone affected, but for those who do not have the means to evacuate, they can face life-altering consequences that are out of their means of control (Schmidlin, 2006). There was no private transportation for about a quarter of a million people in New Orleans when the storm was approaching (Schmidlin, 2006).

The devastating effects of Hurricane Katrina resulted in minorities suffering the greatest. The media has an immense amount of power and can influence how victims and relief efforts are depicted, which can further biases (Miller & Goidel, 2009). Looting became rampant from the increased paranoia and lack of government help for resources (Miller & Goidel, 2009; Garfield, 2007). While whites were depicted more as “victims”, black or minorities were seen as responsible or “deserving” for their situations (Haider-Markel, Delehanty, and Beverlin 2007; Voorhees, Vick, and Perkins 2007). White victims were viewed as “finding” resources, while blacks were screened amongst the media as “stealing” from businesses (Voorhees et al. 2007).

As a result of the increasing looting,the government and the media focused more on stopping the looting (order maintenance), rather than trying to help victims in need from the flooding (Miller & Goidel, 2009; Garfield, 2007). This approach resulted in poor black communities that contained thousands of residents to be stranded without any living necessities to wait to be rescued (Garfield, 2007). The lack of government response and help resulted in victims of the high floodwaters being stranded and trapped amongest their homes before assistance was available (Garfield, 2007) because of the physical inability to reach them.

There was even further disparities within the city of New Orleans because of the poverty rates. The city of New Orleans additionally has one of the largest amounts of poor residents of Afriacan Americans within the United States (Voorhees et al. 2007). Amongst the Gulf Coast area, the poverty rate is 20.72%, compared to the national average of 12.4% (Voorhees et al. 2007).

The various levels of government also became involved amongst media criticism for who was most responsible for the lack of planning and relief efforts for Hurricane Katrina. Once President George W. Bush reduced the Federal Emergency Management Agency’s cabinet-level position in 2001, the close management of the organization began to fail (Olshansky & Johnson, 2014). This is largely because FEMA began to focus their attention and agenda on combating man-made disasters rather than natural disasters (Olshansky & Johnson, 2014).The federal level of government faced high criticism, especially FEMA’s director Michael Brown, and the Bush Administration (Miller & Goidel, 2009). Brown’s response to Hurricane Katrina was seen as unacceptable as FEMA knew of the possible disastrous and damaging effects of the upcoming storm (Miller & Goidel, 2009).

Instead of having the three levels of government work together, they proceeded to focus and push the blame upon one another. The media turned the three levels of government into a “he-said-she-said” situation in order to promote and selfishly save their own political careers, instead of focusing on the disaster and victims in need. Scrutinization of Governor Kathleen Blanco of Louisiana came from President Bush over her supposedly not announcing a state of emergency, which in fact she did (Miller & Goidel, 2009). New Orleans Mayor, Ray Nagin, knew of the approaching storm but procrastinated the mandatory evacuation of New Orleans and the surrounding areas because he did not want to face legal liability against him (Garfield, 2007).

There was more political tension and disunion between Governor Blanco and President Bush with the federal government wanting to do the relief efforts (Garfield, 2007). Blanco could not agree and refused the request because he did not want the President to have all the credit for the relief efforts (Garfield, 2007). President Bush tried to defuse the situation from his responsibility by debating if the effects and flooding of Hurricane Katrina could really have been prevented (Voorhees et al. 2007).

For Hurricane Katrina, the way communities suffered from the devastating effects of the storm and were portrayed lead to falsified accusations, miscommunication, and revealed preexisting prejudice (Miller & Goidel, 2009). Race is unfortunately seen as a factor that can influence the outreach and likelihood of people providing help to those affected by natural disasters (Mcmanus & Saucier, 2012). Individuals pre-existing assumptions towards specific groups or minorities results in outsiders viewing the victims of being responsible for their circumstances; therefore leaving them to rebuild their lives for being “the one’s the blame” (Mcmanus & Saucier, 2012).

Relief efforts and how fast aid is given is sadly based upon one’s race and how they are viewed amongst the world (Haider-Markel et al. 2007). Minorities are viewed within the media as almost invisible and overlooked, or have negative connotations with stereotypical views (Voorhees et al. 2007). With Hurricane Katrina, the media overrepresented the “crime” and poverty, resulting in indirectly viewing black victims as the main problem (Voorhees et al. 2007). Therefore, the news media should have been held more responsible for the possible bias and framing of those living amongst poverty. Blacks noticed this lack of care and biased views towards their community, now they have less trust for the government (Haider-Markel et al. 2007; Voorhees et al. 2007). Hurricane Katrina not only demonstrated the devastating effects of natural disasters, but also the toxic misrepresentation of minorities and how to prejudice our nation can be against those who are still in need (Voorhees et al. 2007).

The Federal Response to Hurricane Katrina. (2020, Sep 27). Retrieved from https://studymoose.com/the-federal-response-to-hurricane-katrina-essay 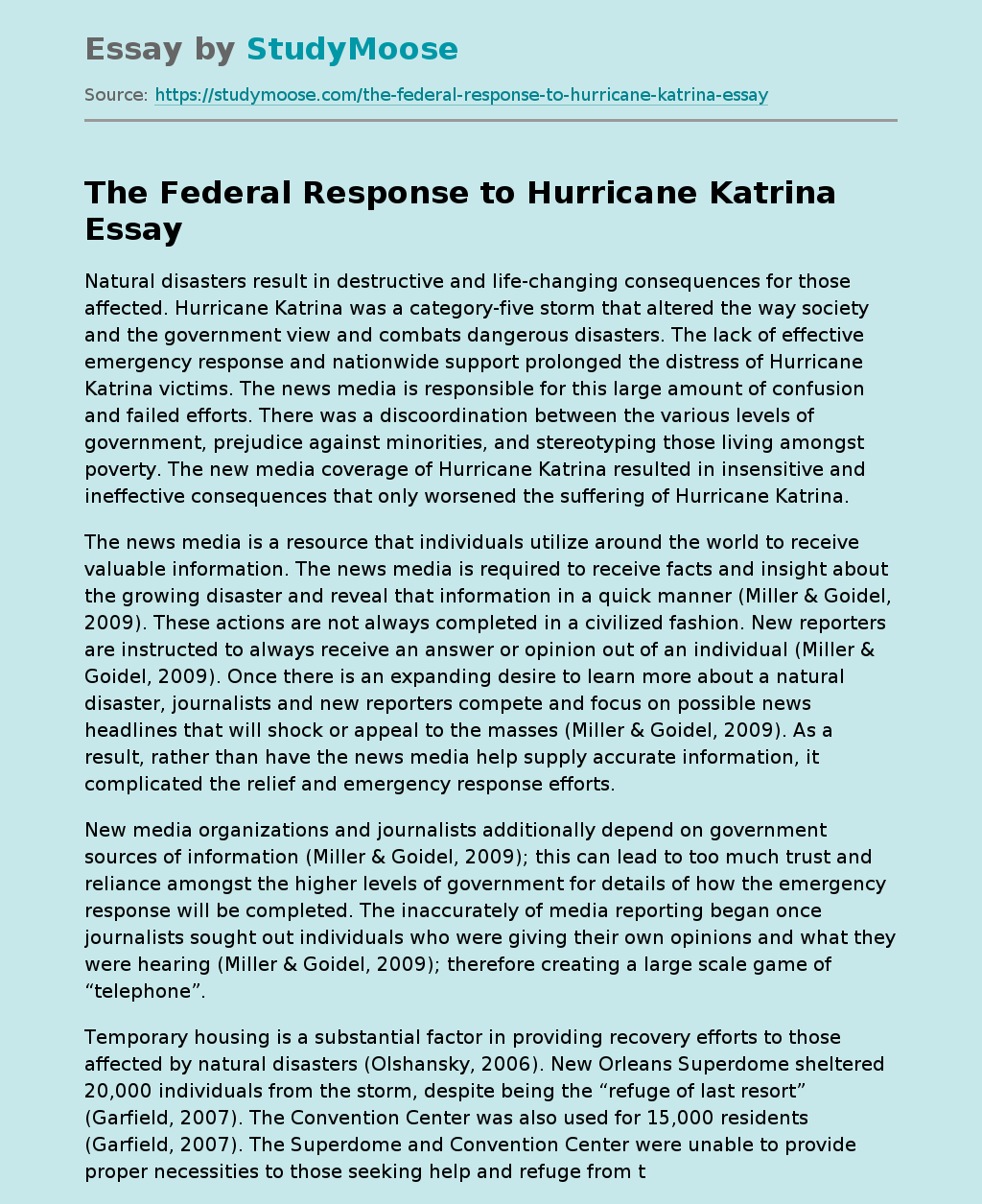